When it comes to a slasher melodrama like American Horror Story: 1984, a multitude of thoughts spring to mind—specifically, what will our slew of counselors do to avoid being slain? Will they split up and evoke survival of the fittest? (Yes) Will they attempt to group together and realize that there’s safety in numbers? (Also, yes) Will there be as many secrets and twists ripped out as there are spilled rivulets of blood? (Oh, hell yes)

As of now, we know the ghastly background of Brooke’s Red Wedding, Chet’s steroid abuse and subsequent dismissal from the Olympics, and Xavier’s former life in gay pornography. As always, there are more delicious details to divulge within this week’s episode “Slashdance,” written by the always welcome James Wong. The taut twists are spit out with a rapid fire glee as more skeletons in the closet come to light over the Long Night at Camp Blood Redwood. Wong dials up the madness to 9,000—the usual, comfortable pace for American Horror Story as the episode gallops to a breathless close with one last revelation (diving into that later).

First off, befitting any good ’80s hack and slash, someone has to have a tragic backstory of a hazing gone wrong, and that dishonor rests upon Ray, whose cowardice reaches peak levels. A year prior, he belonged to a fraternity and, while initiating pledges during Hell Week, he both inadvertently and purposely kills a newbie. The pledge was pulling his pants up (why his pants were down, I couldn’t tell you) when he falls down the stairs and crashes at the bottom. With the pledge presumed dead, and in an attempt to cover up the accident, Ray drops his body in a car and sets about hurtling it over a cliff, except…the pledge is still alive (got to get those jump scare, babay!). What I like about Ray’s flashback being interspersed with his modern day actions is that based upon his past irredeemable deeds, one would think he would use this opportunity in surviving against Mr. Jingles to cowboy up and help be the hero, because that’s what typical Hollywood plotting teaches us but nope, he keeps the transgressions train chugging along by first attempting to abandon his group at the infirmary and then turns his back on Chet, leaving him to nearly die in a punji pit (going to touch back on this in a few). Like any typical yellow-belly in this situation, he absconds with Trevor’s bike and gets a grisly decapitation a la Junior from FRIDAY THE 13TH PART V: A NEW BEGINNING as a reward for his bad behavior. It’s a shame about Ray. 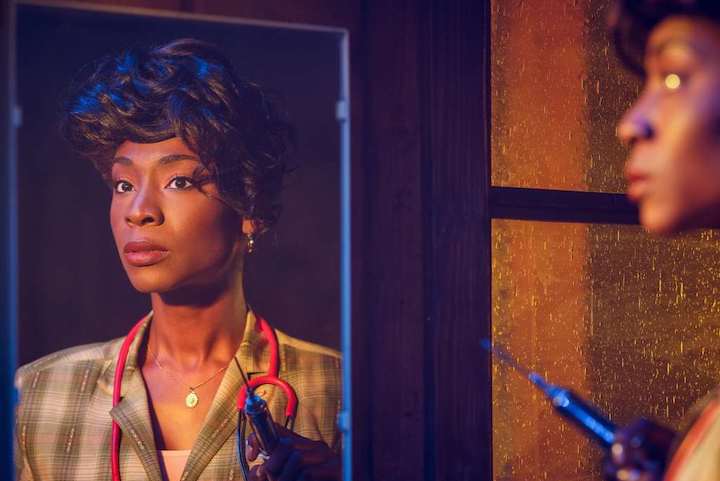 Elsewhere, a whole mess of secrets swirl around Nurse Rita, in that she’s not even Nurse Rita at all but a pop psychologist named Donna Chambers, who specializes in plumbing the psychological depths and motives of serial killers—recently getting Ted Bundy to confess to two as-yet-unknown murders and espouses clichéd intentions for committing carnage like carnivorous consumption of pornography and objectification of women. She aims to uncover Benjamin Richter’s motive for his spree 14 years earlier. After a Mindhunter–esque battle of the brains, which gives us some grade-A acting by John Carroll Lynch (who, per usual, owns the scene in every way), Chambers estimates that the best way to get to the root of the problem is to enable Richter’s escape from the asylum and let him loose back on his old killing grounds; which calls to mind the similar unethical and controversial approach by Dr. Sartain in 2018’s HALLOWEEN.

Their relationship neatly buttons a question I had in the previous episode, when “Rita” is confronted by Mr. Jingles in the infirmary and yet escapes with only a scratch, when he’s known to slay anyone in his way? Now, we know how and why: they’re allies. She commandeers the real Nurse Rita’s (a tragically wasted Dreama Walker) vehicle and outfit and steps into her newly christened role as camp doctor. Her arc and Brooke’s fate are left up in the air when she tranqs Brooke and disappears with into the night. For what it’s worth, I’m perfectly okay with this angle—the person examining the mask becoming the mask themselves.

We also discover that Mr. Jingles has a legion of copycats who like to traipse around the woods around the anniversary of his killings, reminding me heavily of the scene in HALLOWEEN 4: THE RETURN OF MICHAEL MYERS, where Loomis gets confused with a crop of Michael Myers clones on the streets of Haddonfield. Fortunately for us, Jingles dispatches with these knuckleheads in short order, though there is a funny scene where he gets caught up in the bafflement of seeing an asthmatic, urinating doppelgänger right in front of his very eyes. Also, just as I’m bemoaning the lack of creative gore in the season so far, Jingles gets real innovative with the wet stuff, in the aforementioned decapitation and making creative use of a broken boat oar when terminating the real Nurse Rita. In the conversations between him and Donna, I mentally clocked something that’s been nagging at me so far, that perhaps Mr. Jingles didn’t even perpetrate the killings in 1970. He was just a misbegotten fellow, the usual red herring groundskeeper. Sure, he’s clearly doing it now, but my belief is that his time in the snake pit was crucial in turning him into the cruel beast he is now, rather than making him more savage. 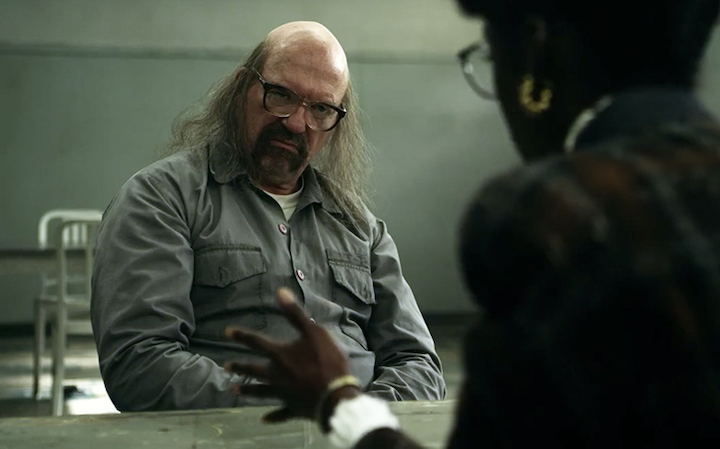 Speaking of theories, I’ve got an update to AHS 1984 THEORYWATCH! The show wants us to think that Mr. Jingles created that punji pit into which Chet and Ray fall…but I think it’s Margaret. She’s entirely absent from this week’s episode, and last week was setting things up to be perfectly spooky: the great slasher movie scenario. Making the boys shower at night? Flipping the lights off? That’s crackerjack. And who else would have the unobserved interval to create a time-consuming trap like a punji pit? Not Mr. Jingles, who doesn’t even show up until nightfall in the first episode. Last week, I ruminated on the idea that Camp Redwood is caught in the throes of a death echo of sorts. I still think that to be true, but Margaret knows this and is setting the appropriate atmosphere for a body count jamboree. Think along the lines of V/H/S and its retro throwback segment, “Tuesday the 17th.” That’s what I believe this season is going for: nostalgia is the trap and the bait.

For an episode filled with cahootery, is it any surprise that we’d have a last scene revelation that Montana is in cahoots with old Tricky Rick, The Night Stalker? What we know of Montana is pretty sparse at this point, she had a history of “nom and vom” at a fat camp, but that’s pretty much it. So saddling one of my favorite actors on the show with my least favorite element could work to service her with some flesh and blood characteristics, but also at the expense of wasting time with a plot that as of now is going nowhere fast.