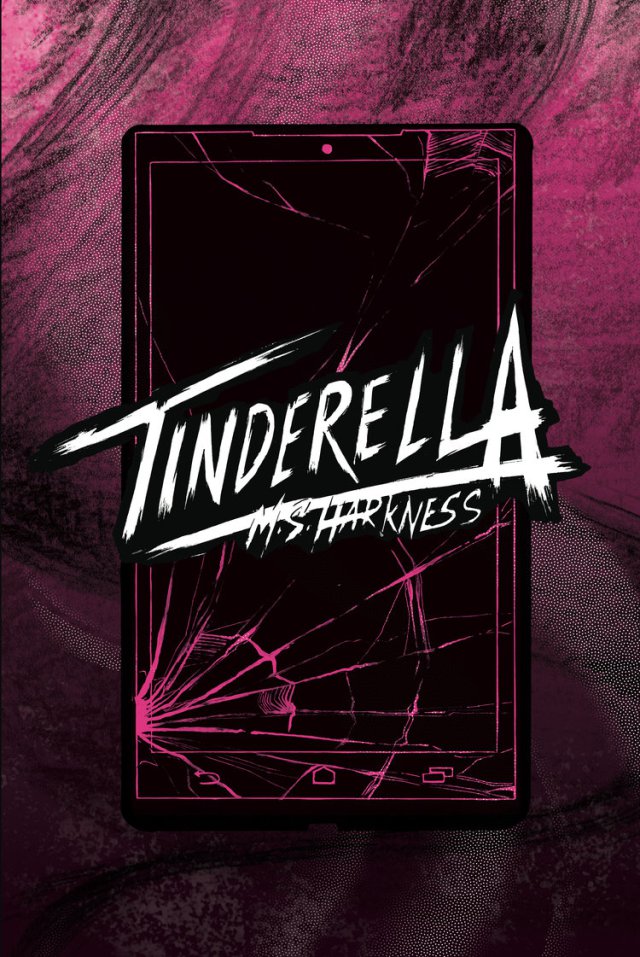 My dating experience entirely pre-dates the “Tinder Era,” a fact for which I’m eternally grateful — and who wouldn’t be? After all, as embarrassing as it may be for many people of my generation to confess to their offspring that that they met their other parent at a bar, it seems to me that it’ll require a greater degree of pride-swallowing — and maybe even a bit of “Dutch Courage” — for parents ten years from now to tell little Jimmy or Jenny that mommy and daddy got together for a quick hook-up on a goddamn matchmaking app and then, hey, things just kinda took off from there.

Still, the times are what they are, and the youngsters seem to like swiping left or right, reducing their fellow human beings to the level of a product being shopped for. It all seems pretty mercenary to me, but lots of people are having success with it, apparently — maybe even cartoonist/fellow Minneapolitan M.S. Harkness. 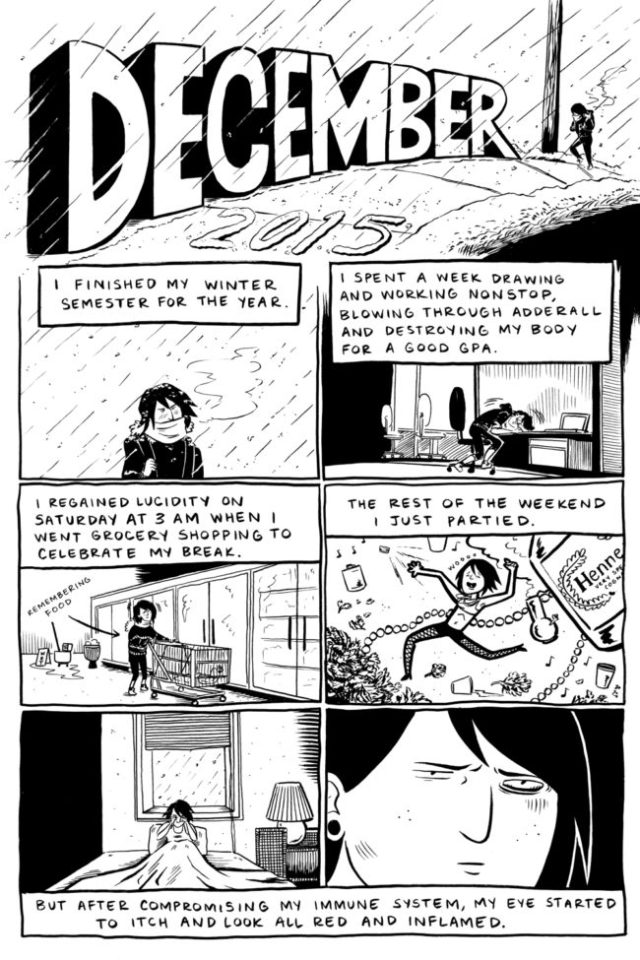 Except, of course, when she isn’t, and her new Kilgore Books graphic novel, Tinderella, documents the good, the bad, and (mostly) the in-between of today’s dating reality with relentless honesty, an admirable degree of self-deprecation, and just the right amount of wit. It’s not a comic that re-defines the autobio/memoir genre by any means, but if a middle-aged guy like me found it engaging, involving, and plenty easy to relate to, then I would imagine that folks more near to and/or in the same “twenty-something” age demographic as Harkness herself will probably find themselves saying, “Oh my God, that’s just like what happened to me!” on just about every page.

I say “just about” because one of the curious things that Harkness does is to intersperse her fairly straight-forward narrative with one-page vignettes designed to at the very least tease out, at the most highlight and amplify, certain themes in the main story, and these are a mixed bag — some do their intended job and justify her decision to take readers on a side-step, while others fall flat. They peter out as the book focuses on more organically-developing subplots (Harkness’ difficult family history providing the wellspring most of these tributaries emerge from), but I keep coming back to them in successive re-visits of the material, simply because they stand out so prominently either for good or ill, and I always appreciate it when a cartoonist is willing to make a gutsy call like that and stand or fall on the choices they make. 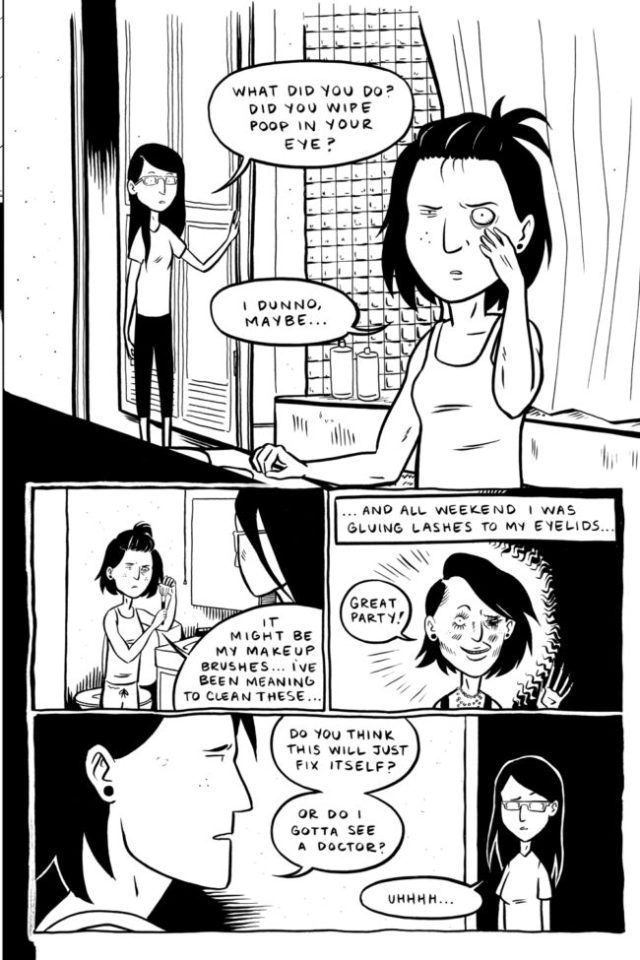 That being said, I’d be very surprised if Harkness tried something similar in the future — not only because her previous, short-form work has been pretty much “straight-line-from-A-to-B” storytelling, but because she’s clearly readying herself for “prime time.” Her cartooning style, for instance, while not particularly distinctive (and that is in no way a “knock” on it), is about as fundamentally solid and smartly-constructed as it gets, her illustrations drawing the eye exactly where it needs to be, her thick lines and studiously-employed, inky blacks creating pleasing images that are easily absorbed and would probably be quite pleasing to even a non-comics-reading audience. In other words, what she either lacks or deliberately eschews in terms of uniqueness, she more than makes up for in terms of sheer, unforced, artistic literacy.

So, yeah, she may make it look easy, but there’s no way that telling a story this personal ever really is. Harkness doesn’t shy away from honest depictions of her own superficiality or insecurity, but unlike a lot of the predominantly-male autobio cartoonists of my generation and the ones preceding it, she doesn’t wallow in her flaws, either. She’s remarkably judgment-free about the subjects of all her stories that I’ve read to date, and when that subject is yourself — shit, that can be tough. Sure, she’s as horny, as obsessive, as hypocritical as many other folks, but she isn’t consumed with guilt by any of that, nor is she particularly proud of it — she’s simply who she is, and we can take it or leave it, and while that sounds like it should be a pretty easy view for someone to come by when examining their own life, in truth very few actually manage to achieve it. I’m certainly not sure that I could. 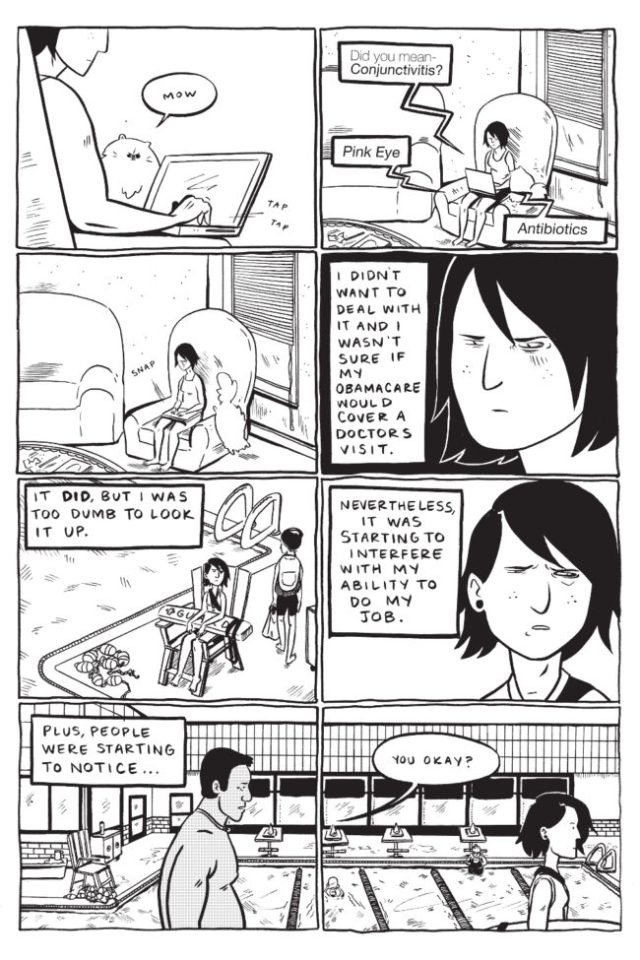 That’s a big reason why Harkness’ comics seem so refreshing, but it was an open question as to whether or not she’d be able to successfully retain this “warts and all, but let’s not dwell too hard on the warts and pay a bit more attention to the ‘all’ part of the equation” in a 100-plus-page book, having solely produced shorter or mid-length strips to this point. Fortunately for us all, she never wavers, never pulls back, never drops the ball. This is some straight-up determined cartooning, and she pursues her sequential storytelling with the same dogged persistence that she goes after tall, muscular, “alpha-male” guys.

I was glad for many things by the time I finished Tinderella. I was glad I read the book. I was glad to see one of the “bright lights” of the local cartooning scene (here’s a couple sports cliches she’d hopefully approve of) “up her game” and “take it to the next level.” I was glad for the laughs and the moments of genuine human poignancy that were offered up in equal measure. But most of all — I was damn glad to be older, and married.