Home  ⁄  The Wire  ⁄  ‘NINJA ZOMBIE’ LIVES UP TO ITS BRILLIANT, TWISTED PREMISE

It is a rarity when a film at the budget level of NINJA ZOMBIE actually lives up to its inspired title. I have watched so many micro-budget indies with great titles and groovy DVD art/posters that were plodding, dull, and talky that I immediately assume a movie with as tremendous a title and premise as NINJA ZOMBIE is going to leave me disappointed. Imagine my pleasant surprise when I found myself cheering and laughing as the film proved itself to be the true lost gem that AGFA and Bleeding Skull are billing it as.

Orlan Sands (Michael Correll) is a slightly jerky archaeology student who gets stranded in a sketchy part of Chicago one night. When a couple of thugs try to mug him, Orlan is saved by the mysterious Spithrachne (Terry Dunn)—a man who clearly has a couple of screws loose, given the large spider tattoo on his face and the way he slits the throats of both thugs with a spur on his boot. Orlan quickly discovers that Spithrachne is no hero. He is actually the leader of a cult of martial artists seeking a magical urn that Orlan’s professor mentor is supervising an archaeological dig to find.

Freaked out that the cult might turn violent in their efforts to get him to help them steal the urn, Orlan turns to his martial artist friend Jack (John Beaton Hill), hoping to be protected. Almost immediately, Jack and Orlan are attacked. Spithrachne kills Jack, breaking the heart of Maggie (Kelly Anchors), his fiancée. But with the help of an unconventional mystic named Brother Banjo (Michael Weaver), Orlan brings Jack back from the grave to continue acting as protection. Needless to say, things do not go as planned when you have to try to maintain control of a NINJA ZOMBIE. 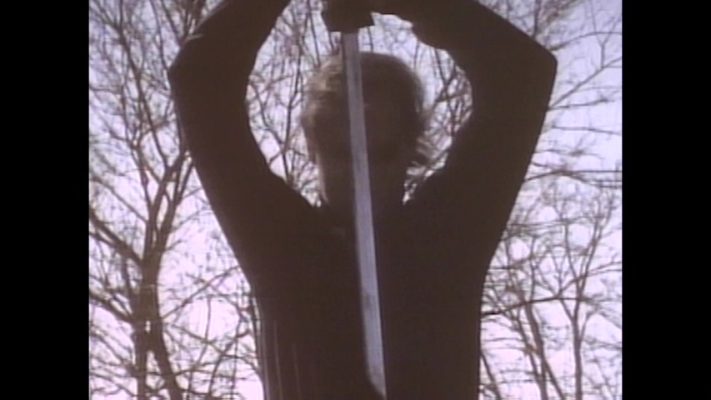 I unabashedly love this movie. Yes, the image gets dark and blurry (it was shot on Super 8 film), the zombie makeup on Hill is dodgy at times, and some of the comedic bits don’t stick the landing, but there is a real heart and desire to entertain that many bigger-budgeted, slickly shot films never come close to managing. The homemade feel that comes from shooting on Super 8 actually adds to the charm of the script by writer/director Mark Bessenger and the fun, mostly straight-faced performances by Correll, Dunn, and Anchors.

Bessenger makes some smart moves to keep the film from becoming a one-note joke that quickly wears out its welcome. He layers on some honest pathos as Anchors plays Maggie’s grief for real and zombie Jack struggles to overcome his undead nature. Even better are some playful bits with Brother Banjo mocking the idea of a “spooky” mystic and an inspired twisting of the old cliché of using NIGHT OF THE LIVING DEAD as the only film that people watch in horror movies. And, of course, there is all the martial arts and (occasionally) gory mayhem you can expect from a movie that promises and delivers both ninja and zombie action. 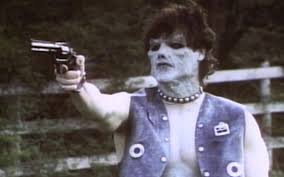 After it wrapped production in 1992, NINJA ZOMBIE had its world premiere at a gay nightclub in Chicago and then never received distribution. If you can overcome the odd look of the Super 8 footage, this movie is a blast. Bessenger’s direction and editing, the overall good performances, and some decent stunt work are on par with bigger-budgeted films, showing that the cast and crew truly did know what they were doing. This is a film ripe for discovery that will quickly acquire a cult following and it deserves the affection of every horror and exploitation film lover who become obsessed with it.

AGFA and Bleeding Skull have done the best they can with the elements they had to work with. Bessenger explains on a very informative and entertaining commentary track that he should have transferred the footage to video and edited that way. Instead, he edited the actual negative, scratching up the film in the process (one of the running gags in his commentary is pointing out the grease pencil marks on the film). While the image is very rough at times, the sound is decent, highlighting a nice score by Steve McIntosh and some comedic sound effects that are used to good effect. 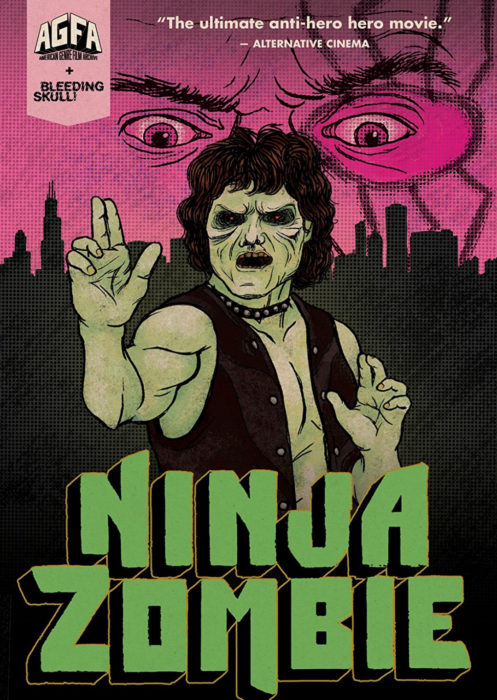 Considering the very obscure status of the film, the DVD is fairly generous in terms of special features. In addition to Bessenger’s commentary, there is behind the scenes footage (my personal favorite is the looks of confusion by cemetery groundskeepers as they watch a fight staged in a graveyard), an early short film directed by Bessenger called IT COULD HAPPEN TO ANYONE, and a recent interview with Hill (who looks like he has aged maybe five years since 1992).

NINJA ZOMBIE is now available on DVD. I highly recommend you check it out.