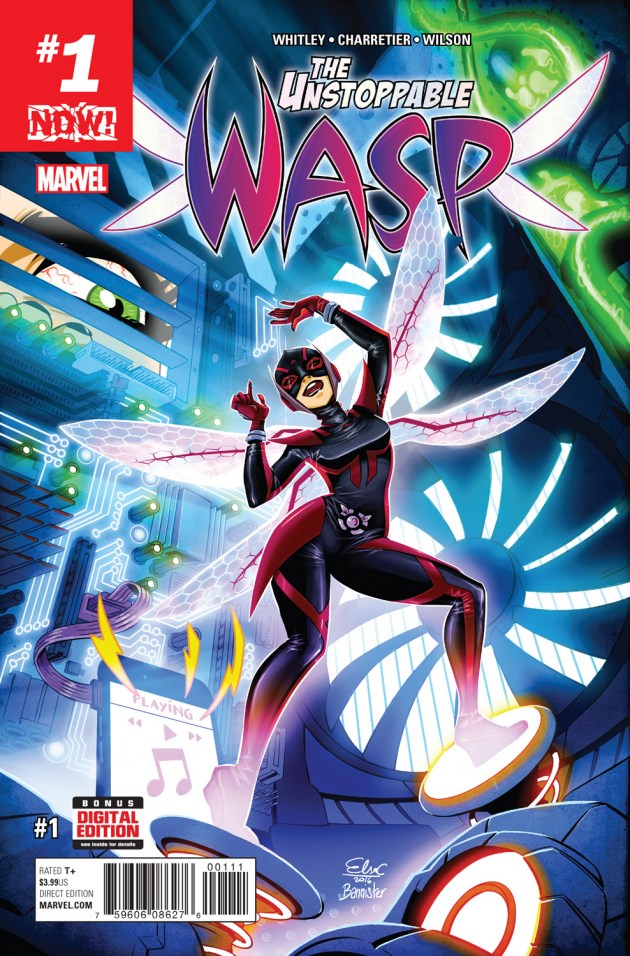 If there’s one book among the “Marvel Now!” 2.0 titles that it seems folks were reasonably eager, if not downright enthusiastic, about checking out, it was The Unstoppable Wasp. Okay, yeah, Marvel’s obviously running out of goofy adjectives to shoe-horn into their series’ names, but the talent being assembled to bring the story of the “new”(-ish, at any rate) Nadia Pym iteration of the world’s smallest female super-hero to life was such a promising assemblage of up-and-comers from the indie scene that this one looked to be yet another “offbeat, girl-centric” comic that would easily, and probably immediately, appeal to fans of The Unbeatable Squirrel Girl, Ms. Marvel, Moon Girl And Devil Dinosaur, and Spider-Gwen, among others. Heck, even me, “down-on-Marvel” curmudgeon that I am, has to admit that they’ve been doing a terrific job on light-hearted-but-smart “outreach” titles like this and, credit where it’s due, they seem reasonably patient when it comes to letting ’em take their sales “lumps” (for a time, at any rate) while they do their job of raising the company’s profile among so-called “non-traditional” (i.e. younger, female) demographic groups. In fact, they’re getting so good at making these kinds of books that they’ve almost got it down to a science. And therein, perhaps, lies the problem. 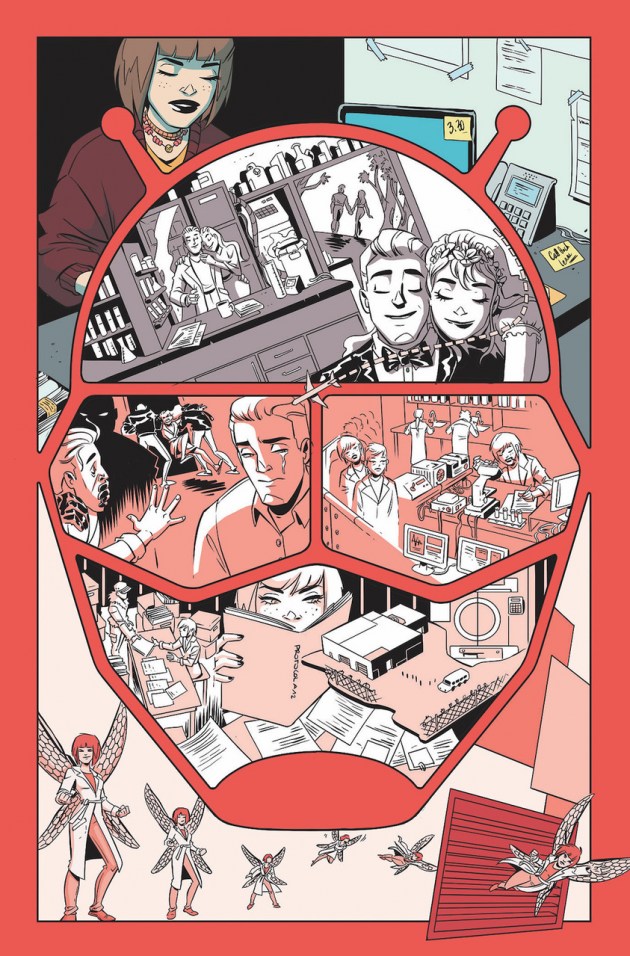 The Unstoppable Wasp #1 is a comic that definitely wants to be fun, but it seems terribly pre-fabricated and, for lack of a better term, “inorganic” at times. Scribe Jeremy Whitley, who’s built up a loyal fan base thanks to Princeless, is doing his best to make Nadia an almost infectiously nice character, but he spends so much time emphasizing her bubbly naivete that she comes off as being rather one-dimensional, and seems more like a starry-eyed “science groupie” rather than the actual brilliant scientist she’s supposed to be herself. Ditto for her interactions with other super-heroes — it’s great seeing her teamed up with Ms. Marvel and Mockingbird right out of the gate here, but the emphasis is squarely on how she reacts to them more than on how they react to her, and the end result is a comic where the title character almost seems like a guest star in her own book.  Don’t get me wrong, I loved seeing Bobbi Morse’s scientific bona fides emphasized every bit as much as her spy credentials or her status as Hawkeye’s ex-wife, but those aspects of her character were already well-explored by Chelsea Cain in her recently-concluded Mockingbird series, and a “Cliff’s Notes”-style further reappraisal of her character is a not-strictly-necessary sidebar in the first issue of a new title that’s ostensibly about someone else entirely. It’s cute how all three super heroines in this story get along, but at the end of the day — at least so far — that’s all it is. Cute. And by the time Nadia decides to use her newfound-mentor’s inspiration to found a new organization called — I kid you not — G.I.R.L. (an unbelievably forced acronym for, if you can believe it, Genius In action Research Labs), we may have crossed the line from “cute” to “cloying.”

Not that I necessarily feel like Whitley’s heart is in the wrong place, mind you. I think it’s terrific seeing new female characters coming to the fore and I love that they feed off each others’ energy and enthusiasm and inspire and encourage one another. Nadia’s immigration headaches are also timely and topical in our current disgustingly anti-immigrant political climate. So there are some positives here. But they demand a more intelligent and thoughtful exploration than the “Oh my gosh, you’re so great!” and “Oh my gosh, you’re so great, too!” treatment that they’re given in these pages. It’s early days yet, to be sure, but given how colossally “Marvel Now!” circa 2016-17 is tanking, Whitley had better hop to it quick if he wants to examine these issues in detail, because this comic is gonna be on a shorter sales leash than Kamala or Moon Girl were given when they were fresh outta the crib. And that’s really too bad. 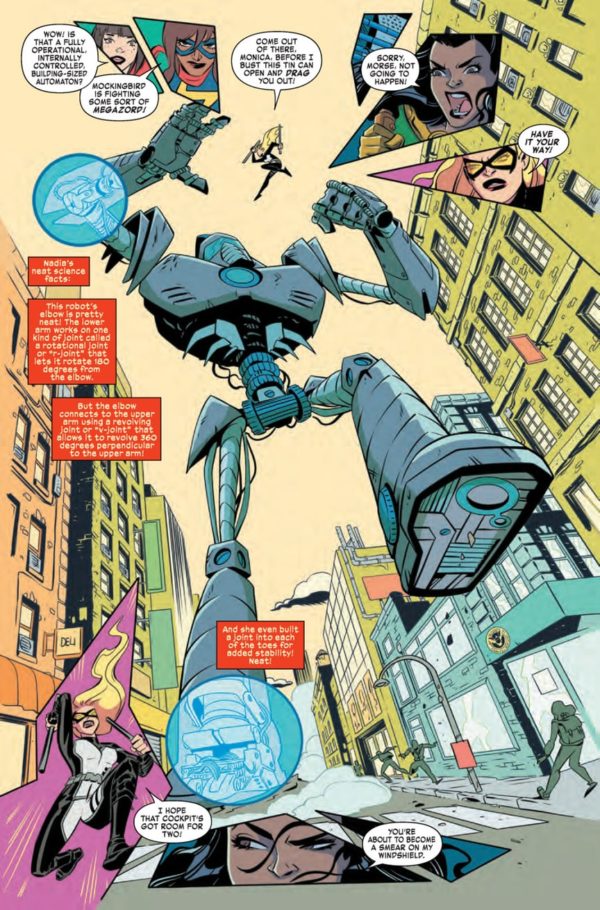 Wait, though! Didn’t I just spend a couple of paragraphs saying less-than-charitable things about this comic? Well, not exactly — I spent a couple of paragraphs saying less-than-charitable things about this comic’s script. When it comes to the art, though, I have nothing but superlatives to offer. Elsa Charretier has been threatening to “break out big” for awhile now, and finally given her chance in a monthly ongoing, she’s riding the opportunity for all it’s worth. Stylistically you can see a bit of Darwyn Cooke, Steve Rude, and even Bruce Timm in her work, but her hyper-inventive panel layouts, dynamic motion, vibrant action poses, and organic sense of flow are frankly unique unto her, and combined with the bold and daring color choices made by Megan Wilson, it’s gotta be said that this book looks like a million-and-one bucks and that it more than easily charges full-steam into the “worth buying it just for the art” category. Yes, I wish the writing was better — and I’m holding out hope that as things progress it will be — but ya know what? I still absolutely loved every page, and even every panel, of The Unstoppable Wasp #1 and added it to my pull immediately. As should you. 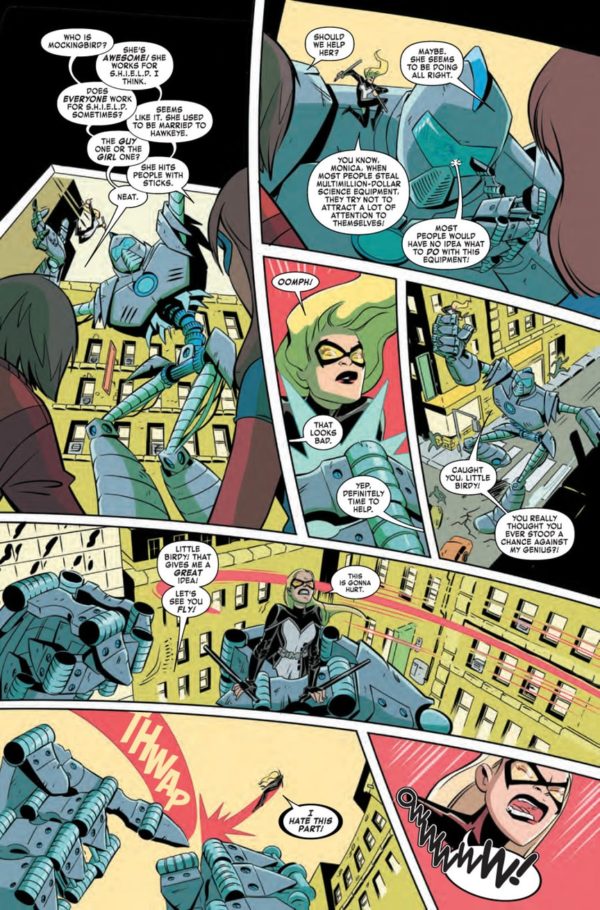 Still, in a comics marketplace suddenly — and happily, I might add — awash with new female takes on so-called “legacy” characters (see the Kate Bishop Hawkeye series and the Riri Williams Invincible Iron Man book), my fear is that a third-tier character essentially competing for the same dollars from the same segment of the fan base is going to get overshadowed by her higher-profile counterparts. Riri’s gonna be wearing the Iron Man armor as long as Bendis wants her to, and Kelly Thompson and Leonardo Romero are giving us the best Hawkeye since Fraction and Aja — so while The Unstoppable Wasp has immediately established itself as one of the best-drawn books out there, I’m just not sure how it doesn’t find itself lost in the shuffle of other, more-profitable “strong female lead” comics. Time will tell — and I’d be absolutely ecstatic to be proven wrong about this — but my best guess is that we’d all better enjoy Charretier’s take on The Wasp while we can.

And then, of course, we’d all better follow her over to whatever title she’s given next!