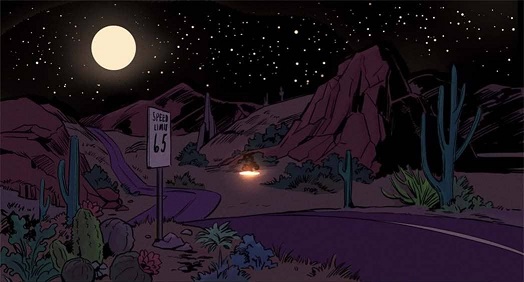 If you’re in the market for some punk witches and vampire bikers — and really, who isn’t? — Vault Comics has the book for you. WITCHBLOOD is a neon- and blood-soaked saga that is equal parts BIRDS OF PREY, NEAR DARK, and a mixtape from your friend who used to be a college radio DJ. Written by Matthew Erman and drawn by Lisa Sterle, the first two issues of this ongoing series promise a brightly hued rock ‘n’ roll aesthetic, intriguing mythology, and a hell of a lot of fun. 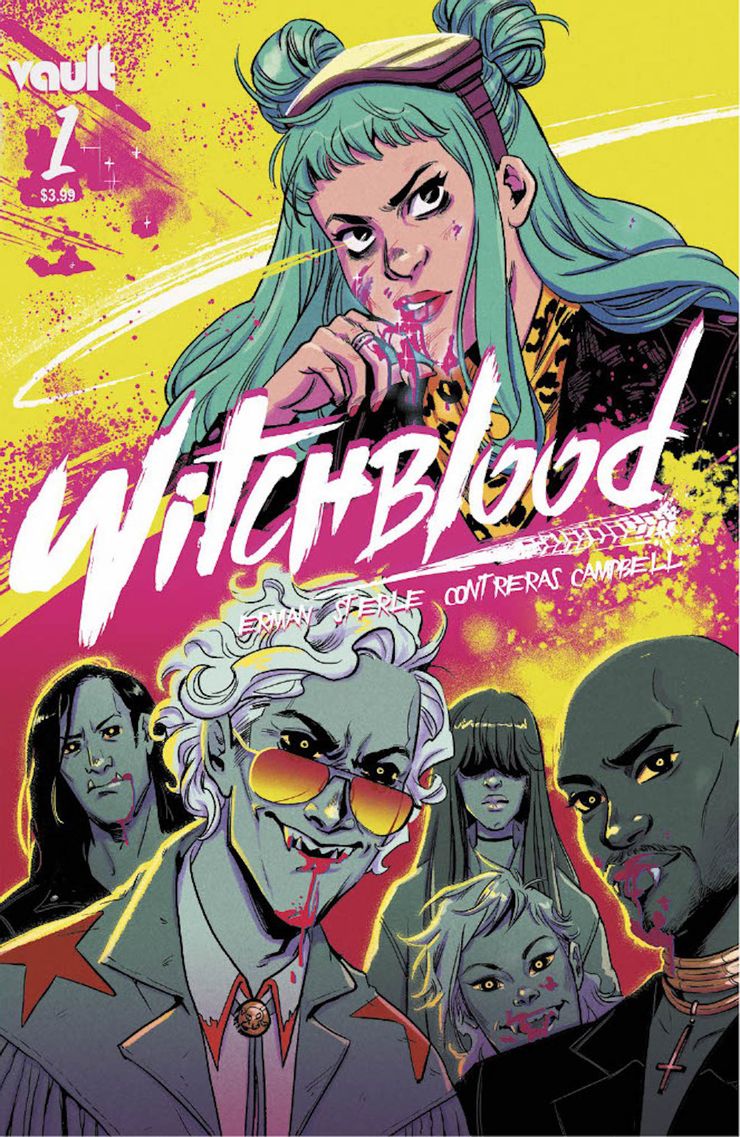 Yonna is a witch on the run. Along with her crow familiar Bhu and her motorcycle Ramblin’ Rose, Yonna travels the U.S. looking for good food and a way to escape her troubled past. When she’s forced to make a pitstop in a small Texas town, she finds herself in the crosshairs of Paxton LaBelle and the Hounds of Love, a vampire biker gang who claim to be “setting your whole situation on fire.” They look and sound like they would have opened for The Cramps at CBGB (and since they’re immortal, they very well may have), but the gang’s current goal is to hunt down divination witches in order to collect their powers. The Hounds of Love are looking for Esmeralda, the ancient witch goddess who seems to be the reason that Yonna abandoned her coven in favor of the open road, and they need immense power to find Esmeralda and ultimately kill her.

If that sounds like a lot of backstory to cover, it is, but WITCHBLOOD cleverly metes out bits of exposition in between its witty banter and vamptastic bloodbaths. The reader ends each issue with more questions than answers — what went down between Esme and Yonna? why are vampires and witches sworn enemies? did the Hounds of Love get to meet Poison Ivy? — but Erman’s script gives the reader enough clues to keep them engaged and eager for the next issue. The narration is poetic and mystical; combined with Sterle’s gorgeous backgrounds that convey the beauty and freedom of open desert roads, they turn the series into a glittering Western epic. 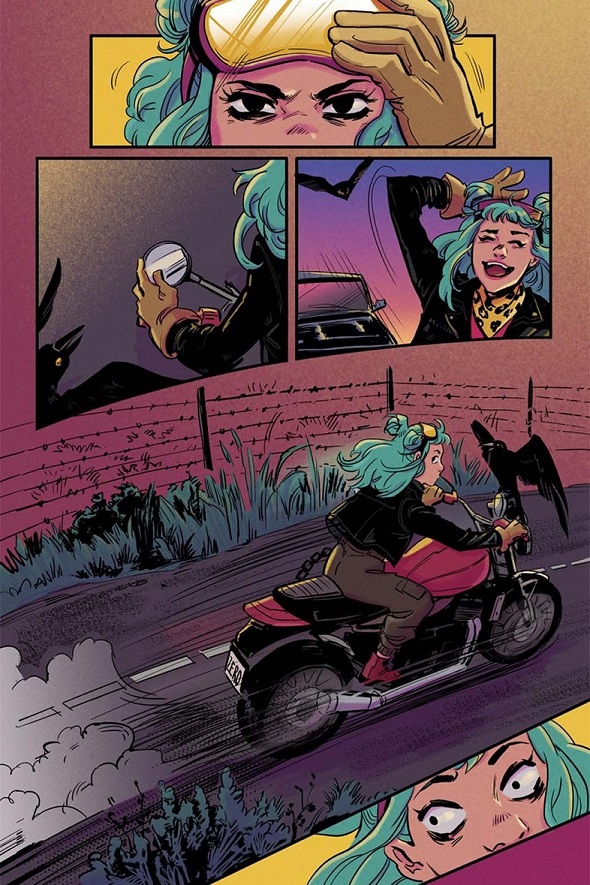 The strong character work in WITCHBLOOD shines through even in throwaway characters like a cowboy puzzling over James Joyce in a single panel, but it is particularly impressive in its lead protagonist and antagonist. Colorist Gab Contreras’s work is vivid and expressive, and her contribution to Yonna’s characterization is an absolute joy. Yonna’s backgrounds are more vibrant and mystical than the other characters’, with swirling pinks and purples contrasted with aggressive yellows highlighting her exuberance and power. Between Sterle’s art and Contreras’s colors, they depict Yonna as one of Lisa Frank’s rainbow kittens holding a switchblade at an MC5 concert. Paxton is similarly memorable: just like his namesake (Bill Paxton, who played Severen in the Western vampire classic NEAR DARK), Paxton is alluring and terrifying in equal measure. He’s handsome and charismatic, but his deranged eyes and fiery color palette show that he is obsessive and dangerous.

Yonna just wants to lay low and keep running, but Paxton has an appetite for drama and ostentatious villain speeches, making them perfect foils. Yonna may be an immortal witch with incredible powers, but she’s still a regular girl with a taste for life’s simple pleasures: motorcycles, music, and empanadas. Her dialogue mixes archaic pleasantries with modern foul-mouthed snark, creating a joyfully anarchic character you want to root for even when she’s making terrible decisions. Paxton’s penchant for explaining his plans to the only person powerful enough to stop him could come across as a lazy exposition device, but WITCHBLOOD makes it work. The supervillain grandiosity fits Paxton’s outsized ego, and the book needs a larger-than-life antagonist to go up against an unpredictable force of nature like Yonna.

The creative team is keenly aware of their book’s neon punk vibe, engaging the reader’s ears as well as their eyes. From the name of Yonna’s bike to her potions — Ambrosia of Aqualung closes up a victim’s throat, while a bottle of Mr. Blue Sky burns vampires like daylight — WITCHBLOOD drops musical references like so many synesthetic bread crumbs. Issue 1 opens with Yonna singing a song by Mannequin Pussy, and the mixtape never lets up from there. Issue 2 instructs readers to play “Chattahoochee” during a particular scene, and though I was disappointed to have to pause the Mannequin Pussy album I was using as accompaniment, the musical direction was spot-on: I needed to hear Alan Jackson’s down-home twang to set the proper mood. 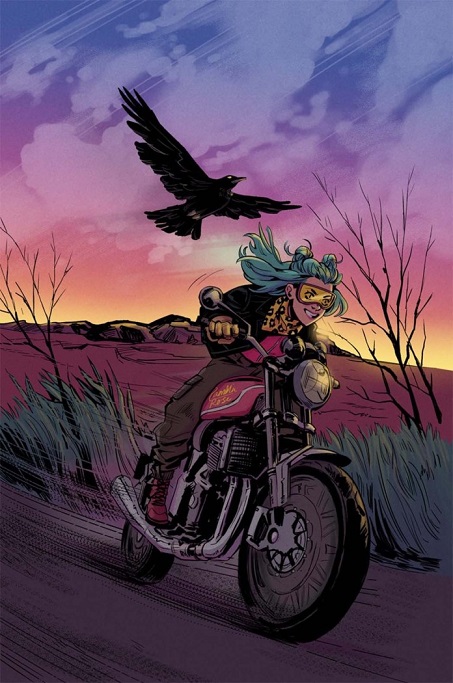 WITCHBLOOD continues its offbeat assault on the senses with Jim Campbell’s expressive lettering. You can hear the “SKREEE” of Yonna’s bike wiping out due to Campbell’s juddering all caps. Rather than using standard onomatopoeia for the action — bang, crash, or even the throwback socko! — the book punctuates its fight scenes with hilarious sound effects like grab as a vampire accosts a bar patron and bird as Bhu attempts to peck out a woman’s eyes. The vampires’ dialogue is in red text, lending a carmine eeriness that convinces the reader they can smell the blood on the vampires’ breath.

Covered in blood spatter and smears of neon light, WITCHBLOOD is a supernatural horror adventure that will satisfy fans of vampires, Westerns, and kickass heroines with mysterious pasts. The book’s snappy script, expressive character design, and electric color palette combine with its propulsive musical cues to create a comic book series that is off to a gleefully bloody start. 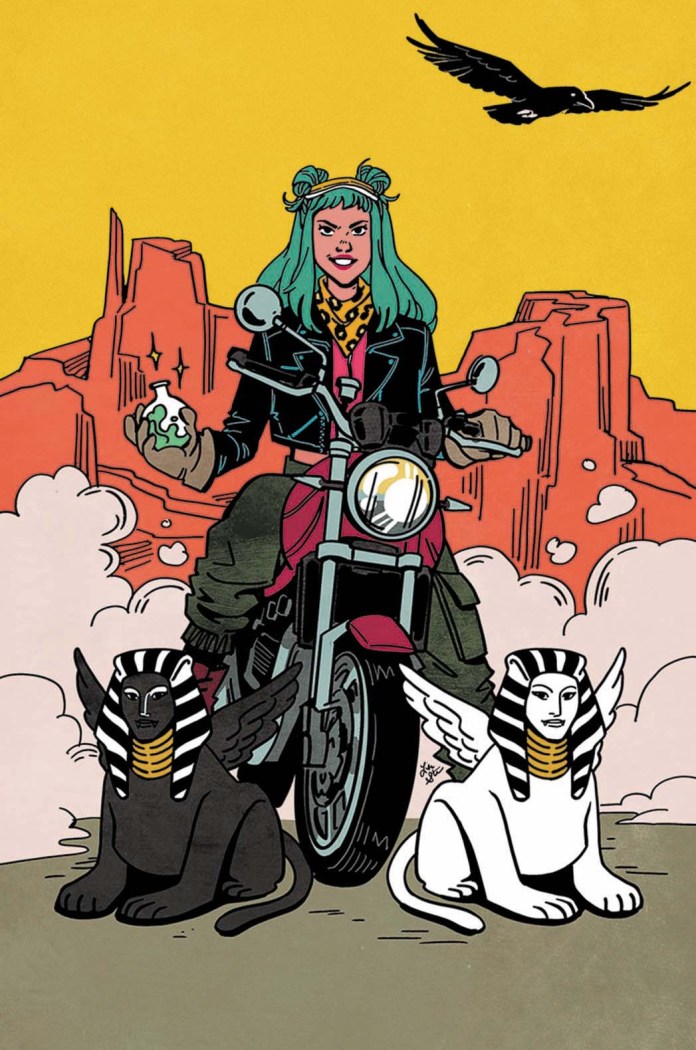