Home  ⁄  The Wire  ⁄  RETURN OF THE GRINDHOUSE COMICS COLUMN!

Comics are a medium uniquely suited to stories that terrify, shock, disturb, and disgust, and as such I’m thrilled to bring regular comics coverage back to Daily Grindhouse. I’m a lifelong horror fan who became obsessed with comic books in college, so a horror comics column is a dream assignment for me. I plan to bring you frequent review round-ups along with longer deep-dive essays that cover what’s happening in horror comics today as well as some of my favorites from the past.

This column is about exploration and discovery. It’s impossible to run out of horror comics to read, and I’ll do my best to balance mainstream titles with lesser-known books. My goal is to appeal to hardcore and casual comics fans alike (and hopefully convert some non-comics fans along the way). That won’t work without readers, so I’m always open to your suggestions and feedback. Please feel free to reach out on Twitter to let me know what I should be reading and what you want to see in this column. My tastes reach every corner of horror comicdom, so I should have a little something for everyone.

Horror comics have been seducing the innocent for nearly 80 years. I’m excited to continue that fine tradition and warp some minds here at Daily Grindhouse. — Jessica Scott. 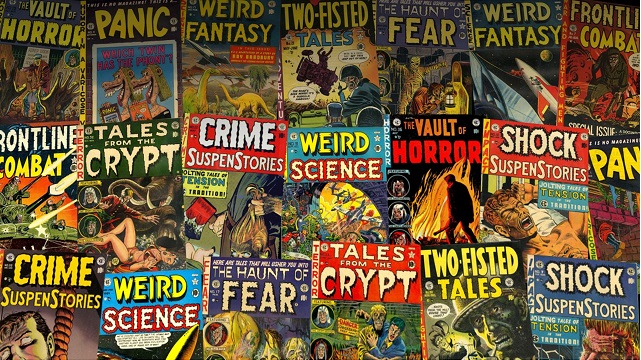