I know what you’re thinking. “This is supposed to be a comics column, Jessica, not just a WITCHBLOOD column.” You’re totally right! This is a comics column where I talk about the weird, creepy, and/or deranged books I think should be on your radar. It just so happens that WITCHBLOOD has been the topic of the first two installments. Luckily for us, there are plenty more fantastic horror comics out there, and I absolutely will be talking about them in the very near future. But for now, let’s catch up with everyone’s favorite punk rock disaster-slash-biker witch. 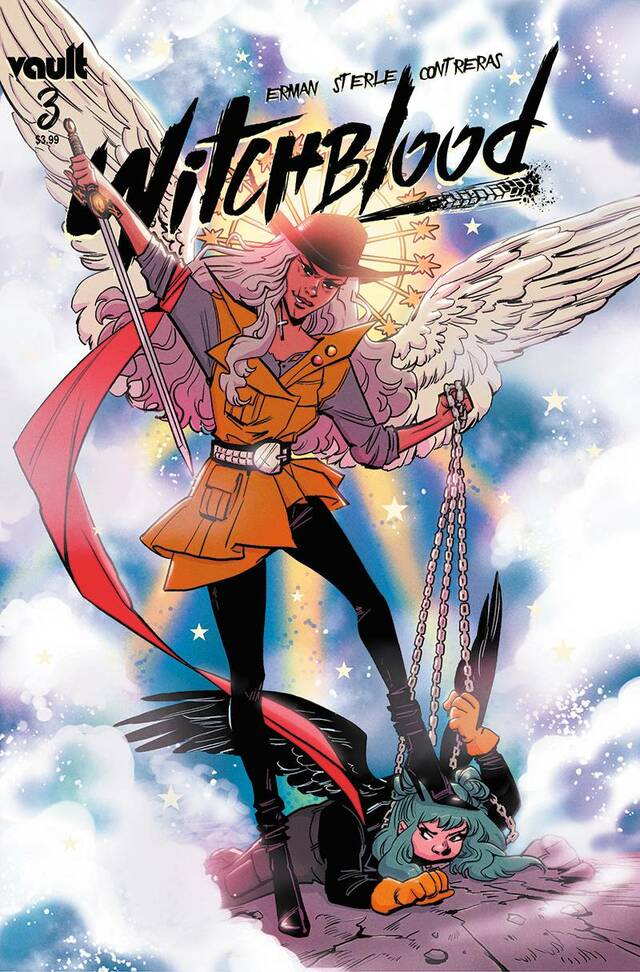 Yonna and her crow familiar Bhu are still traveling the Southwest trying to figure out how vampire biker gang the Hounds of Love are tracking and killing divination witches in their quest to locate and defeat Esmeralda, the ancient witch who gave Yonna her powers. In true comic book fashion, issues 3 and 4 find Yonna doing battle with an old adversary and then teaming up with her to try to kick some ass and right some wrongs. Atlacoya, who faced off with Yonna at the beginning of issue 1, and delightful new character Texas Red begrudgingly join forces with Yonna to combat Paxton and his blood-sucking crew once they realize that these are no ordinary vampires. The Hounds of Love have knowledge and resources that they shouldn’t have, and they’re aiming to use that arcane expertise to storm the gates of Heaven itself.

WITCHBLOOD continues its joyfully electric run with more of the anarchic neons, snarky humor, and mystical surprises that we’ve come to expect from the book. Dynamic, expressive panels demonstrate an impressive grasp of narrative and pacing, especially in issue 4 when writer Matthew Erman instructs readers to play Lou Reed’s “This Magic Moment” during a pivotal scene. The song lyrics sync up perfectly — and I mean perfectly, right down to the second — with the comic’s dialogue. I honestly have no idea how Erman and artist Lisa Sterle pulled it off (other than being very, very good at what they do). This musical magic trick was merely the first of several jaw-dropping moments in the issue. 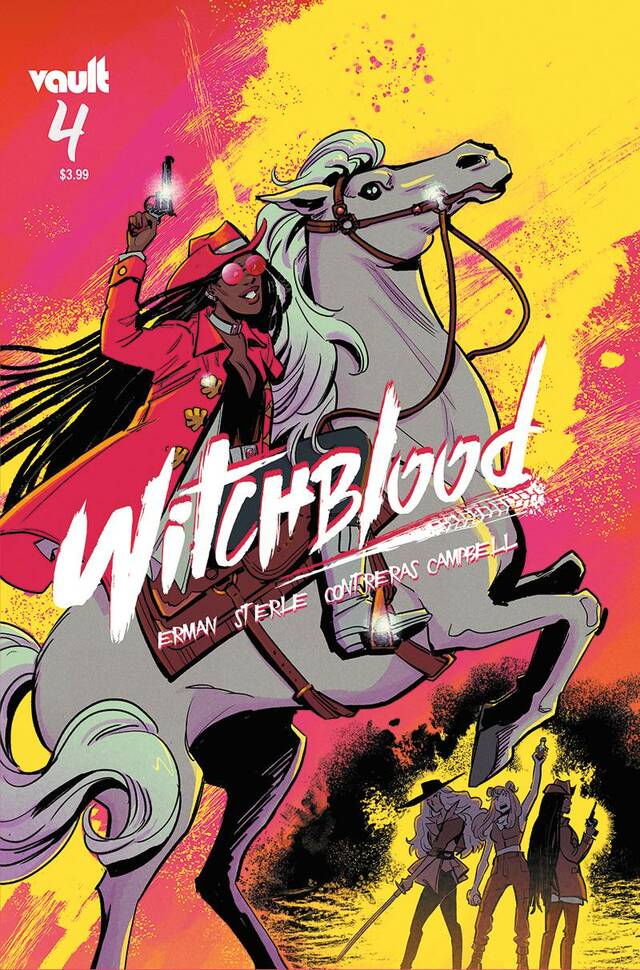 During the Lou Reed-accompanied scene, Yonna drinks a potion (aptly named “This Magic Moment”) to undergo a transformation that will allow her to take out the vampires, hopefully once and for all. The result is a mesmerizing double-page spread that makes Yonna look like an elemental Sailor Moon draped in pansexual Pride colors while bonding with the Phoenix Force. It’s an awe-inspiring moment that’s punctuated by an eerie and expressionistic panel as the vampires feel the full force of what Yonna can do when she gets really pissed off.

Though issue 4 is definitely a turning point for the series, issue 3 doesn’t skimp on the horror or the incredible visuals. It’s an especially fun read for fans like myself who consider themselves eye-gore aficionados. Yoshi, the Prophetic Witch of Sheds and my new favorite character, makes an appearance along with her many, many eyeballs. (Her name has to be a tribute to Yoshi Yoshitani, the creator of gorgeous variant covers for each issue of WITCHBLOOD who also happens to be one of my favorite artists.) Yoshi’s character design is a gooey, creepy delight, and the way Atlacoya locates her when she’s investigating the town’s sudden rash of eyeball thefts is another example of the book’s self-aware narrative shortcuts that earn laughter and goodwill rather than eye-rolling (sorry) or scorn. WITCHBLOOD always knows exactly what kind of book it is, and it revels in inviting readers along for the ride.

Gab Contreras continues to amaze with her color work. The different qualities of light she achieves are astonishing: the vampires’ mystical weapons look totally different from Yonna’s spells, which in turn look totally different from Texas Red’s fabulously luminous steed Belenus. Color is just as much a character in WITCHBLOOD as Paxton or Bhu or the as-yet-unseen Esmeralda, and Contreras’s work gives the book as much life, personality, and effervescence as Yonna herself.

The series is packed with humor, whether it’s the glorious ‘90s-style fight dialogue between Yonna and Atlacoya or the vampires’ inability to focus on the task at hand as they chit chat about Japanese toys just before finishing off an enemy. Visual gags abound: a weaponized disco ball makes an appearance in a boss battle, and the surprising action verbs continue to delight. Be sure to pay close attention to Yonna’s map to learn where to “look out for Catholics” and to reveal which state has banned Bhu for life.

The first two issues of WITCHBLOOD raised several intriguing questions about the nature of Yonna’s world. Readers get an answer at the end of issue 4 that explains a lot about the eternal war between vampires and witches, but that answer opens up so many more questions, namely: “What?” and “The fuck?” The reveal at the end of this issue was the biggest jaw-dropper of all. Refreshingly, I have absolutely no idea where WITCHBLOOD’s narrative is headed next, but I cannot wait to find out.