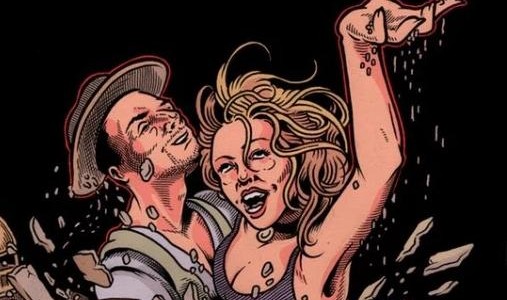 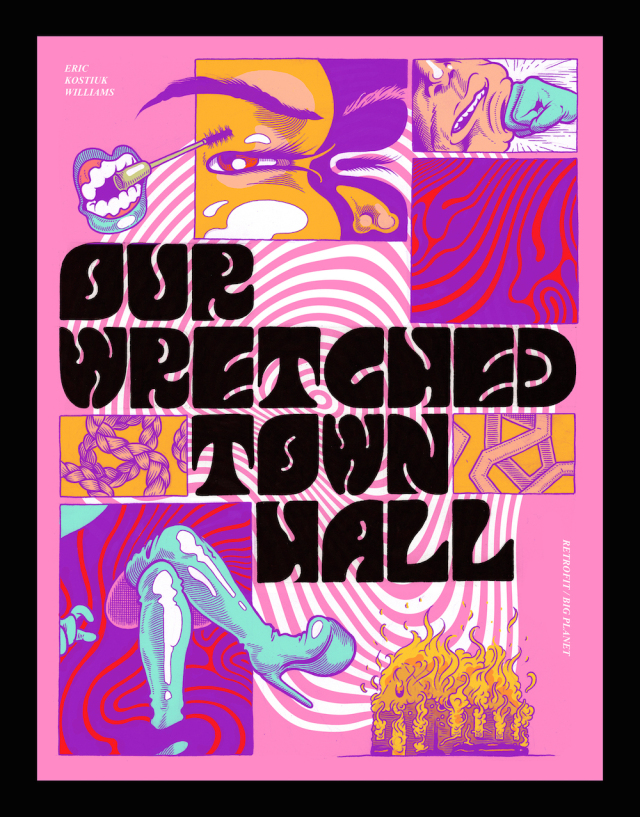 Nothing constrains Eric Kostiuk Williams. His cartooning is never less than near-infinitely adapatable, fluid, mercurial — maybe literally, as his forms, figures, even structures seem liquid at room temperature, ever in a state of joyous flux, refusing to define themselves and embracing the joyous possibilities of being whatever their whims allow them to be.

His late-2018 Retrofit/Big Planet Release, Our Wretched Town Hall — a collection of short stories and illustrations — is my third exposure to his work, following on from Babybel Wax Bodysuit and Condo Heartbreak Disco, and certainly continues the pattern of no real pattern, as each vibrantly-colored panel promising an almost entirely different visual experience to the one before it. Here, though, the “quick hits” succession of strips combine to form something of an overarching statement that says  “we are whatever we wish to be in any given moment, and ‘permanence’ is only what we make of it.” 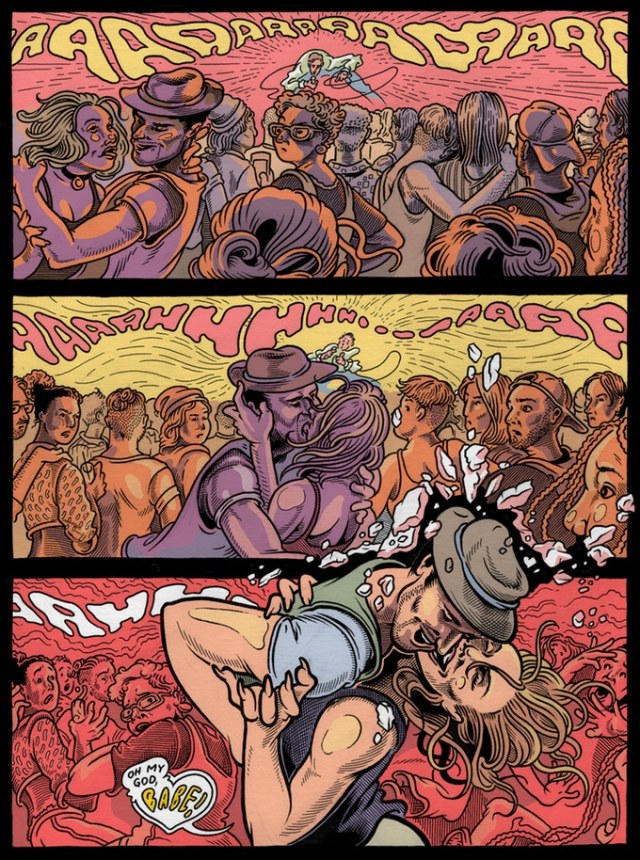 Perhaps ironically, certain consistent themes have been at the heart of Williams’ ouevre for some time — gender identity and expression, queer culture and history, urban gentrification — most of which lend themselves fairly naturally to his post-psychedelic ethos even if they don’t necessarily, by rights, sound like they should, but there’s an underlying tension between some that’s exciting to ponder, not so much as a series of contradictions, but as polarities that complement each other.

Williams, for instance, clearly feels that the past should be honored, its temperament cleaved to, yet he also damn-near venerates the impermanent, the transitory, holding it as almost an ideal to strive for in the face of conformity and homogenization of culture. The titular strip in this book is probably the most ambitious in terms of expressing that, depicting the town hall in question at six distinct stages in its history/trajectory ranging from the new and bustling to the atrophied and dilapidated, but in others it is people — including the author himself, shown at a party — who constantly evolve or devolve, continually re-arranging themselves into forms and shapes and even states of being conducive to the scene, the situation, the space they are in. 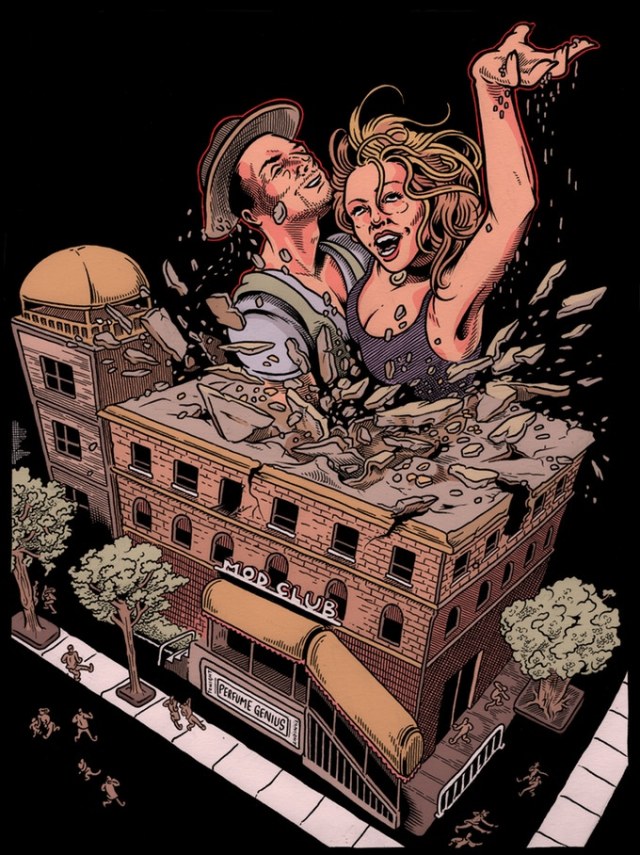 If you’re a big fan of the laws of physics, you may need to let that go and just surrender to the flow here, but if you’ve got a pair of working eyes (or, hell, even one working eye), I wouldn’t expect you to put up much resistance. This book feels very much like an impromptu celebration, even when there’s not one going on — hell, even when one of the strips is a graphic adaptation of an emotionally-charged speech delivered by Keith Cole at Toronto’s Videofag art gallery. “Dull” is not a word in Eric Kostiuk Williams’ vocabulary, and that’s not just true on a surface level, its rejection on a conceptual level is at the very core of his overall artistic project. 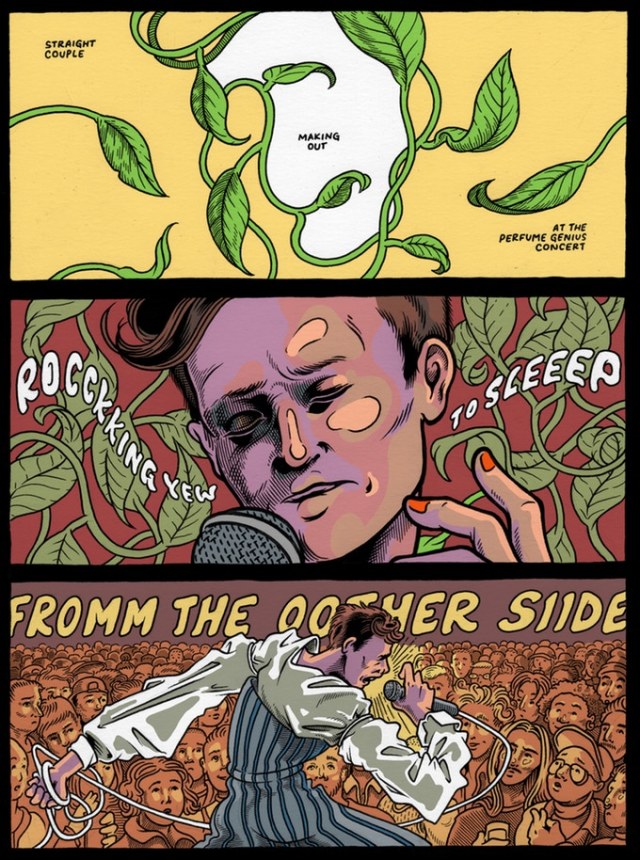 Every day, every night, every instant of our lives is pregnant with potential and possibility, whether we recognize it or not — and there’s no more radical statement in this age of regimentation and conformity and uniformity than to simply refuse to buy in or play along. To say “I am what I am — and that’s whatever I say it is and wish it to be.”

And, of course, a split-second later you may just feel like being someone and something entirely different. Eric Kostiuk Williams not only understands that, he holds it to be a sacred truth.