I remember way back in the day, when I was a child, I would spend my weekends camped out in front of the television, watching regional networks like WPIX-11 out of New York, hoping to catch a glimpse of whatever horrors I could find in between arguments over control of the remote with my sister (I can’t count how many times I’ve subjected my family to the myriad televised screenings of TREMORS.) It was my Saturday and Sunday ritual, flipping through the channels until I landed on something vaguely scary looking, eagerly leafing through the TV Guide and zeroing in on whatever monster movie from the early ‘90s was there to delight me. And there, amongst them, was the 1993 killer dog opus MAN’S BEST FRIEND.

I remember having seen MAN’S BEST FRIEND enough times in my childhood that certain scenes were seared into my brain: the film’s star attraction, a genetically modified St. Bernard, climbing a tree to gulp down a cat (well, a very obvious cat puppet) whole; the dog pissing a stream of acid urine on a man’s face; plucky Ally Sheedy squaring off against gravel-voiced Lance Henriksen. I also vaguely remember it being…not good. Something to watch because it might have been the only thing on, not because I loved it. I hadn’t seen it in years before Scream Factory opted to release it on Blu Ray. Revisiting it as an adult cemented one thing for me.

It really is that bad. 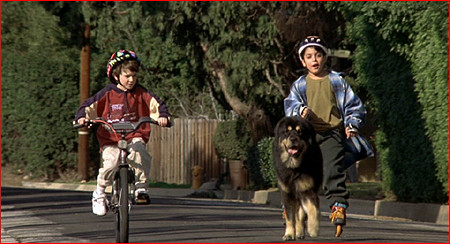 CUJO meets THE TERMINATOR seems to be the elevator pitch that  writer/director John Lafia came up with to sell  MAN’S BEST FRIEND, and it also seems that Lafia opted not to develop that idea any further once he sold that pitch. MAN’S BEST FRIEND is as thin and perfunctory as a movie can be. It’s an almost defiantly passionless film, with everyone from Lafia on down going through the motions of making a film about a killer dog spliced with the DNA of various animals that gives it deus ex machina superpowers. Watching the movie it feels as if Lafia, hot off CHILD’S PLAY 2, was brought in to an executive’s office to pitch an idea that he didn’t have, crossed the first two posters he saw and found, to his chagrin, that the execs liked the idea and decided to fast track this underdeveloped concept that he doesn’t care about into a film. It’s that robotic and mechanical a movie.

No one is trying, not even Sheedy or the usually reliable Henriksen. This is an assortment of stock characters being assembled around various scenes meant to represent “horror,” all guided with a shrug by the director as the crew delivers second-rate music and cinematography and special effects. In some ways the film plays a parody of a bad Disney animal movie: Sheedy is the plucky news reporter who breaks into a science lab where animal experimentation is happening and saves a big, lovable dog from his cage. Hijinks ensue: Max chases kitties and mailman and romances the neighbor dog next door. Except, here, the hijinks also involve a bastard of a junkyard owner getting his crotch bit off. Oh, and that neighbor dog? She doesn’t so much get romanced but raped in a heavily coded scene that’s meant to play as comical because its dogs and not humans, I guess? 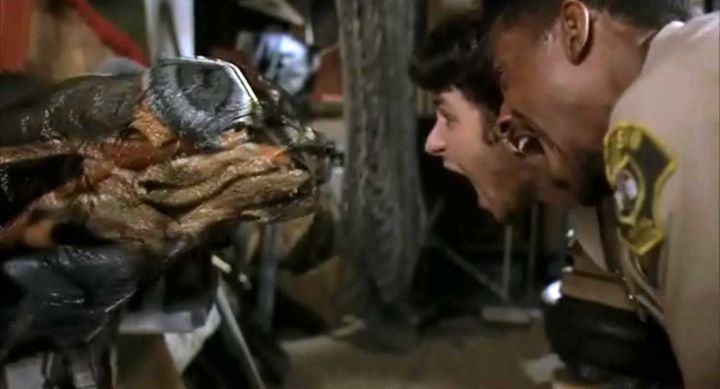 Henriksen plays the scientist who owns Max and knows that his dog is not done being thoroughly tested and without the right drugs being administered, is a ticking timebomb, a lovable mutt doomed to quickly turn psychotic in a matter of hours. Henriksen is our denim-clad Loomis, our bespectacled Ahab, but, despite the gravitas the actor has often brought to even the most undeserving schlock, he’s just simply unable to muster any enthusiasm in this script or movie, coasting through on minimum effort.

There’s absolutely no one to care for in MAN’S BEST FRIEND. Max is a monster plain and simple, a vicious creature who’s bound to turn on even the most loving human, but pretty much every person that he’s pit against as victims is a jerk that gets what’s coming for them: Sheedy’s boyfriend, the mailman, a mugger, etc etc etc, all get what’s coming to them for the most part. Sheedy is pretty much the only nice character, but that’s all she is–nice. She’s a one note heroine who doesn’t even get to save the day, or doing anything heroic–she’s an oblivious idiot the entire time. Meanwhile, Max gets to be a Swiss army knife of skills designed to move the movie from one desultorily staged kill scene to the next: oh he can climb trees! And pee acid! And literally turn himself into his backgrounds via camouflage. There’s just no suspense,fear or even fun as the movie plods from one scene to the next.

Scream Factory has done the lord’s work helping to keep forgotten movies from being discarded to the remainder bin of history, saving movies that might never have made the jump from DVD to Blu–or even VHS to DVD, keeping them alive for another generation of fans to find. As such, films once dismissed have become renewed with adoration, and Scream Factory’s work has done much to rehabilitate the image of horror cinema in the ‘90s, derided as the worst decade in the genre. But the recent flood of ‘90s films like TALES FROM THE HOOD, DEMON KNIGHT and THE CRAFT making up the company’s release slate shows that the decade wasn’t nearly as bad as detractors indicate. The flipside of the coin is that there’s only so much content out there to be released, and with Scream Factory already competing with companies line Arrow and Vinegar Syndrome, the inevitability is that some chaff will be bagged with the wheat. Maybe there was a hope that there would be a lost cult audience for MAN’S BEST FRIEND, like many of the titles that Scream Factory has put out, and maybe there is one. But probably not–even Scream Factory seems to understand this, as they put very scant extras on their Blu. If this new edition of MAN’S BEST FRIEND is valuable for anything, it’s this: finding out that not every film is worth saving from the delete bin.