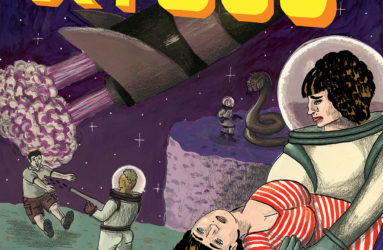 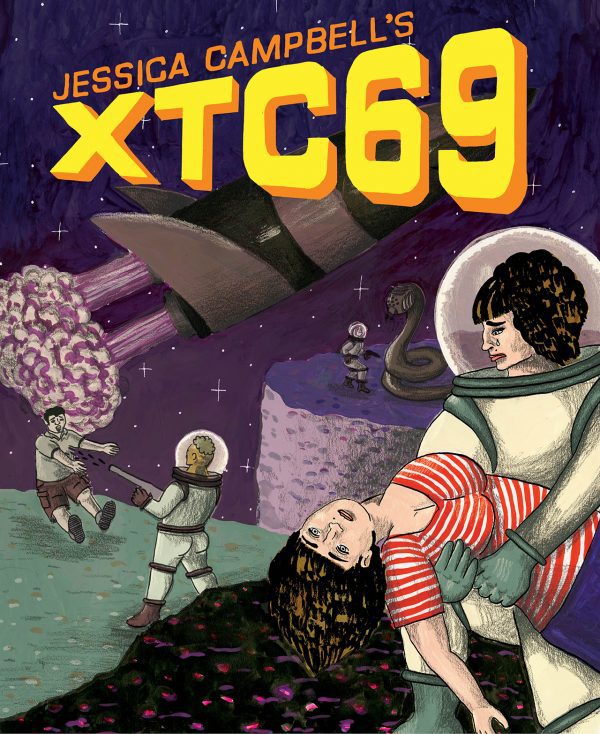 By now you’re well-familiar (or should be) with the laundry-list of societal problems that have “trickled down” into all forms of media, including comics, and also know that right near the top of said list is misogyny, which many of us fooled ourselves into thinking was on the way out — that is, until the biggest misogynist imaginable was elected president, and the once-appropriately-marginalized “alt right” and “edgelord” internet subcultures, both rife with unreconstructed sexism of the most sickening sort, seized on the opportunity of Donald Trump’s political ascendance to become more loud, brash, boorish, and obnoxious than ever. Their bullshit is just plain unavoidable now, and as “GamerGate” and “ComicsGate” have proven, no corner of the “information” superhighway is safe from misogyny’s malign influence. We’re literally saturated in a toxic stew of aggressive male chauvinism that churns and boils 24/7.

Cartoonist Jessica Campbell, thankfully, isn’t taking it laying down. Her previous book, Hot Or Not?, turned the whole premise of the “male gaze” on its ear with by means of sharply-delivered absurdist satire, and in her just-released Koyama Press graphic novel, XTC69, she one-ups herself by taking aim at misogyny in a very specific literary sub-genre, namely pulp sci-fi (with the work of Robert Heninlein coming in for an extra dose of richly-deserved skewering), and deconstructing it with what can only be called a sense of sheer, unadulterated joy. 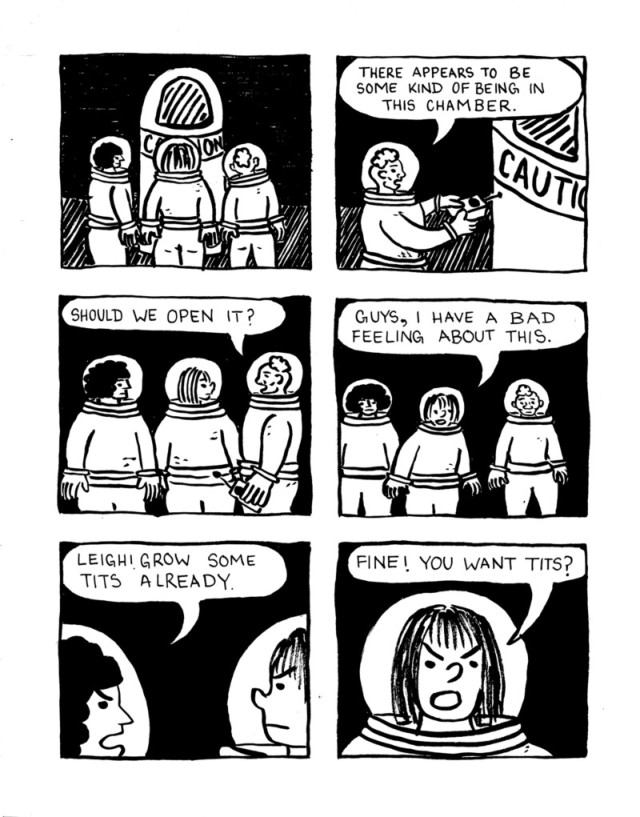 Campbell is a bona fide expert at tackling serious subject matter without taking herself too seriously along the way, and for proof of this look no further than the fact that she makes herself the center of her own story on two different fronts, to wit: in the future, a trio of adventurous, rough-and-tumble female astronauts, led by a captain named Jessica Campbell, arrive on a barren Earth, ostensibly seeking mates in order to repopulate their all-female planet, but find only — Jessica Campbell (who they come to label “JC2,” for obvious reasons), as in, the “real” Jessica Campbell, who’s been cryogenically frozen for the last 700 years and barely has time to take in the fact that she’s the last survivor of her world before deciding, what the hell, she might as well tag along with these other ladies and see if she can find a new place to call home.

Standardized six-panel grids are Campbell’s preferred page layout, and her thick, fluid linework is especially effective at driving home the less-than-subtle OTT absurdity of the situations she places her characters — and herselves — into: on the all-male planet of Mxpx, for example, the continent the “dudebro” assholes live on  is literally shaped like a penis, and these guys, led by “President Chad,” sound more or less exactly like the “men’s rights” dipshits you find all over social media these days, literally informing our protagonists that women abandoned their planet because “those ingrate bitches wouldn’t give us nice guys a chance,” before requesting that they smile more or, in one instance, even just coming right up to one of them and asking “blowjob?” Jordan Peterson, these are your offspring, and it doesn’t take too long for “JC1” to do the entirely reasonable thing under the circumstances and order Mxpx to be destroyed. 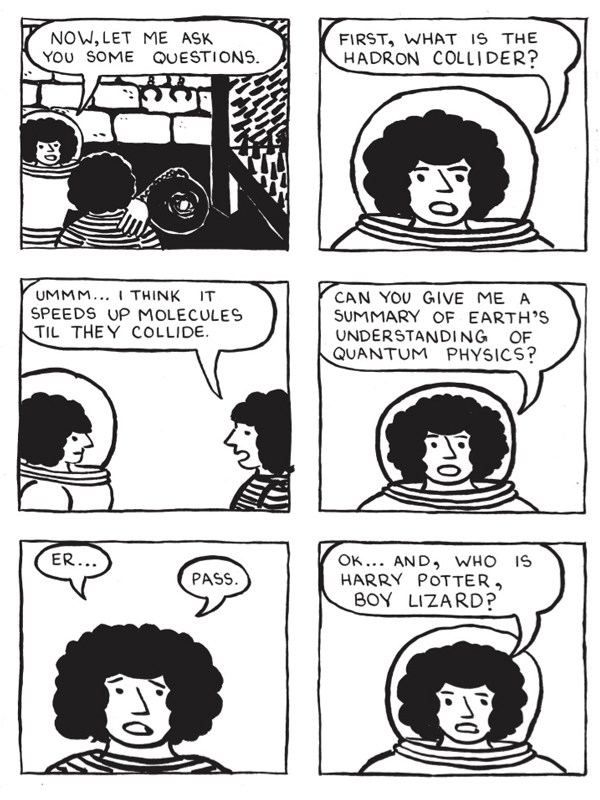 Wait, though, doesn’t that consign the all-female planet to certain doom? Well — no, but I’m not gonna give away how that fate is avoided because you really should read the book. And besides, all this is almost second-fiddle to the real action in the story, which involves a budding romance between, you guessed it, both Jessica Campbells. Does that get interesting? You bet it does! And it goes no small distance toward ultimately setting up the book’s redemptive final act.

What really impresses, though, is how swiftly and thoroughly Campbell manages to obliterate every bogus “argument” used to advance not just misogyny, but patriarchy, homophobia, transphobia, and even racism over the course of her narrative, and how she does it all with – dare I say it – a smile. It’s a knowing smile, an informed smile, a wry smile, but a smile nevertheless: her enemies are paper tigers clinging to outmoded systems of “thought” and she’s already got them beat — and furthermore, she knows it. 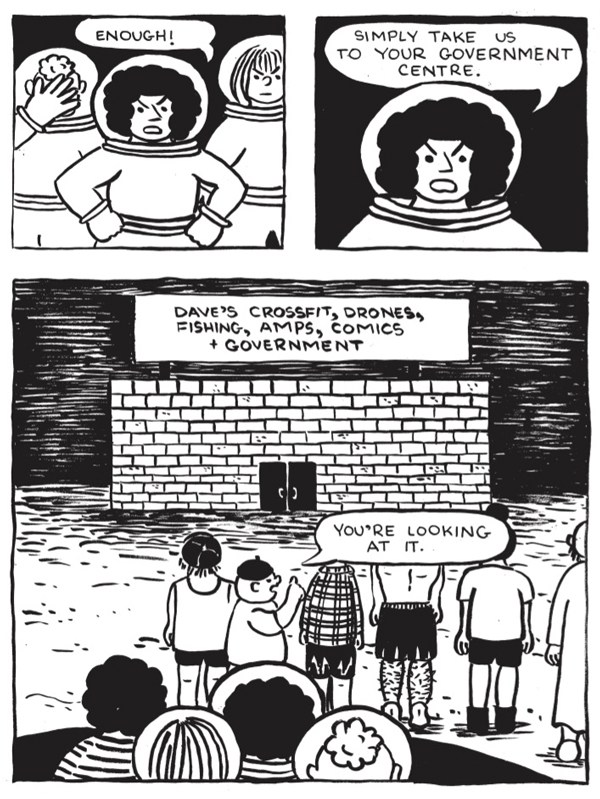 Now, all you nervous fellas out there, just in case you were wondering whether or not this book “goes too far,” fear not: Campbell employs the classic “logic” of straight white cis male privilege against itself and informs us that “a man read it and said it was fine” and that, hey, “some of (her) best friends are men.” A “comicsgate” numbskull like Richard C. Meyer or Ethan Van Sciver couldn’t have put it better himself, and it just goes to show that there’s no slack in Campbell’s act when even her frigging acknowledgements page is this spot-on.

By the time you reach it, though, you’ve come to expect no less. XTC69 is a work that oozes entirely-earned confidence by a cartoonist firing on all cylinders. Jessica Campbell takes us to the farthest reaches of space and time, sure, but her book is as “here and now” — and, consequently, as essential — as it gets.