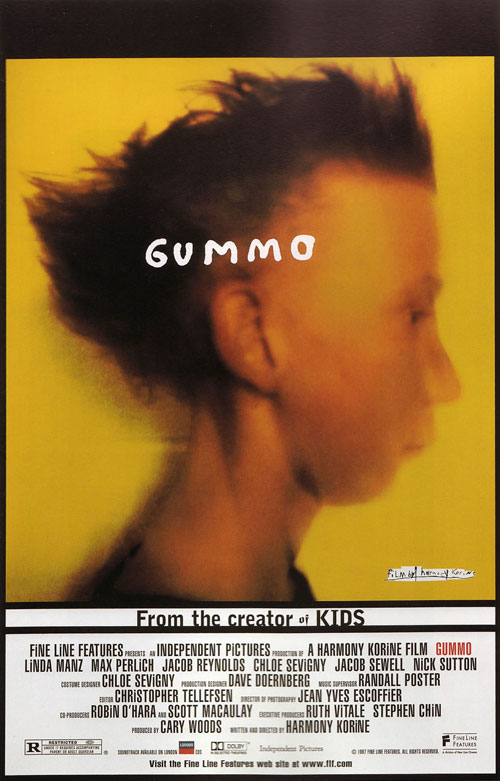 Harmony Korine’s directorial debut GUMMO is screening this week at The Music Box in glorious 35mm. The screening is being presented by The Front Row Presents and sponsored by Daily Grindhouse and The A.V Club. The film was released back in 1997, and despite the fact that it was considered one of the worst films of the year by NY Times, it has gained cult status due to how memorable, bizarre, and original it is.

GUMMO is set in a small tornado-stricken town called Xenia, Ohio and the loose narrative focuses on the nihilistic lives of the residents as they pass time by doing odd and destructive things around them. Korine based many of the situations and characters off of real life experiences he had during his childhood and shot the film in his hometown in Tennessee. The cast features many unknowns and non-professional actors (with the exception of Linda Manz (DAYS OF HEAVEN), but also features a memorable role from Chloë Sevigny, who at the time was dating Korine. The idea of shooting this film with a non-recognizable cast, on location, and ditching the traditional narrative structure really brings out the authenticity of GUMMO and makes it a very compelling and interesting piece of cinema and it also challenges the viewer of what a film should and should not be. For example, there is a very famous scene featuring one of the main characters Tummler (played by Nick Sutton) sitting in a bathtub filled with dirty water and eating a plate of spaghetti while his mother (played by Linda Manz) washes his hair. However, the weirdest part of this scene is the fact that there’s a piece of bacon taped to the bathroom wall. The scene is incredibly uncomfortable to watch, but yet intriguing because it’s something that wasn’t done before at the time. Even the legendary Werner Herzog had something to say about the scene and stated: “When I saw a piece of fried bacon fixed to the bathroom wall, it knocked me off my chair. Korine’s a very clear voice of a generation of filmmakers that is taking a new position. It’s not going to dominate world cinema, but so what?” This quote is 100% truth and honestly, who cares if GUMMO isn’t a film that is featured or recognized as one of the best films of all time, I believe it’s a film that is hard to classify because of its strange and surreal originality and should definitely be sought out by anyone who’s interested in watching something different especially when its screening in the 35mm format. It’s a very different experience when watching a film like this on actual film. I watched GUMMO when I was only 9 years old and ever since then, it has left a very strong impression on me, mentally and creatively. The film was something that was new to me because I was used to watching a lot of big budget Hollywood films that solely wanted to entertain audiences by telling a story with big explosions, sex scenes, and feature a famous movie star like Tom Cruise or Arnold Schwarzenegger. Experiencing GUMMO at a young age and wanting to make films in the future, really helped me realize that films don’t always have to tell an interesting and unique story by making them on million dollar budgets and they don’t always have to follow the traditional narrative structure. GUMMO is not an easy film to digest, and it’s definitely not for everyone, but again, if you’re interested in watching something different and have an open mind, I strongly recommend experiencing this beautifully insane and bizarre film in 35mm at The Music Box this week. I guarantee that it’ll be something that you’ve never seen before in a theater.