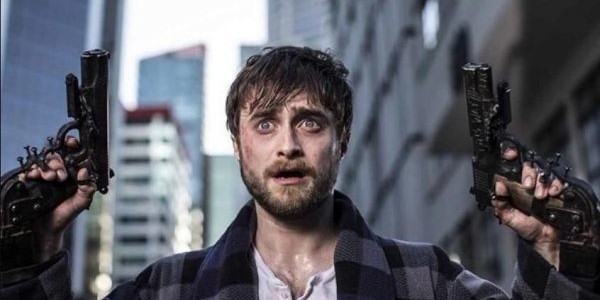 Movies like GUNS AKIMBO have a fine line to walk between entertaining and irritating. Flashy, colorful and in-your-face, they either act as breathless, pulsating fun — or just pain exhausting. Misjudge the bravado, and the whole thing can feel like you’re being screamed at by a paranoid, spittle-flying gamer geek hyped up on a half dozen cans of energy drink (‘sup, Kyle.)

And at first, GUNS AKIMBO threatens to feel like that kind of assaultive, sugar-rush hangover. It’s a SCOTT PILGRIM meets CRANK videogame, all brash, self-consciously “punk” attitude that threatens to overwhelm you with its hyperactivity. It’s a very of-the-moment smartass action comedy: Daniel Radcliffe plays Miles, the kind of shiftless loser-geek nobody you often see in films like this. He pines for his radiant-haired ex Nova, and works a spirit-killing job as a game designer, only he works at one of those cutesy-poo phone-app companies lorded over by a Crossfit addicted tech athlete bully. He has only one source of self-value: being a  troll online. Or, to be accurate a troll to the trolls. He’s a self-righteous keyboard-warrior jackass, the kind of smug schmuck who doesn’t realize that his self-professed “troll-hunting” doesn’t make him all that much better than the snide assholes he professes to despise. And it’s that quality that gets him in trouble when, one night on a drunken bender, he decides to mess with the fans of Skism, an online death-sport tourney where battle-scarred criminals battle each other to the death.

Miles is a vegan peacenik nerd who lords his own lazy pacifism over the throngs who cheer at each bloody death in Skism. His online anonymity makes him feel like a Moral Warrior God, and who hasn’t felt the compulsion, every once in a while, to rile up those slavering message board hordes? Except, Miles as pisse off the wrong trolls. Skism’s tattoo-covered megalomaniac creator Richter (Ned Dennehy) doesn’t take too kindly to Miles’s judgmental insults. So he kidnaps the kid, bolts guns into his hands, and pits him against Nix (Samara Weaving), Skism’s star fighter.

Miles quickly learns that Skism isn’t just some live-action videogame designed to stoke its viewers’s armchair bloodlust. It’s a real deal murderthon. And now Miles has to get in touch with his inner savage to avoid getting blasted away the cackling maniac pixie on his tail, who’s like Die Antwoord’s Yolandi refashioned as John Wick.

GUNS AKIMBO is directed Jason Lei Howden, the Kiwi filmmaker who previously made the death-metal spatter comedy DEATHGASM. Here, Howden makes the briefest feint at topical relevance. GUNS AKIMBO is coked-up commentary on our modern culture, maaaan. But it’s really a bullet-riddled splatter cartoon. Howden is smart enough to add just a bit of self-awareness to his rock’n’roll action rocket. He makes jokes about our addiction to the Internet, about how we hunger for watching wanton violence, even about how male and female character rolls are approached in films like this. Mostly that commentary just comes in the form of wry jokes. There’s just enough going on behind the eyes to make you think there’s some substance here. 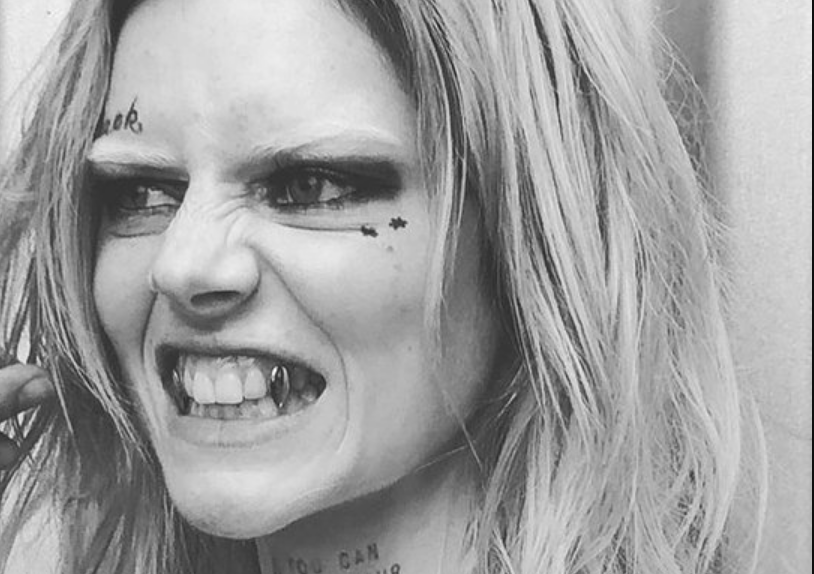 What Howden really wants, though, is to make a full-throttle midnight movie blast. He succeeds. This is a movie designed to amp you up. GUNS AKIMBO starts a  little too in love with his blunt-force audaciousness — it almost becomes one of those films that are just a little too enervatingly “too much” — but it eventually finds its rhythm. Miles, of course, becomes a cause celebre amongst the Skism crowd, as his dork-doofus attempts to stay alive (and several steps ahead of Nix, Richter and the police) make him, first, a figure of mockery, than one of revere as he somehow manages to not get mowed down in a hail of gunfire. Radcliffe is game in the role, making Miles a fully fleshed out nerd avatar, and making his frustration and desperation palpable. He also nails the comedy of Miles, not just the snappy, quippy smart-aleck sarcasm, but  the physical comedy of having, well, loaded guns bolted to both hands (let’s just say, it’s not easy to pee.)

Radcliffe is equalled by Samara Weaving, who is fast becoming a genre film goddess. She throws herself into the role of Nix, imbuing the character with a raucous rabid intensity. Nix loves the bloodshed — she thrives on it — but she’s not some one note villainess; she’s a trigger-happy metal-head party-girl gone off the deep end, but she roots Nix’s bloodthirst in an empathetically vulnerable place of pain. She arrests your attention whenever she’s on screen.

Which is good, because there is a lot happening on screen. This film is a monster. There’s a feral punk energy to it, and Howden directs the hell out of his action scenes. Everything is lit up in blue and red giallo-police-light colors, and the camera loops and swirls around bodies being rent through with bullets, all as a series of 1980s pop covers underline everything. It all threatens to become a little too fatiguing. But Howden knows how to keep a steady hand on everything. GUNS AKIMBO is discordant, cranked-up nuttiness, but it’s never less anything but fun.