Being a truly “cult” filmmaker in the year 2019 is in some ways much easier than it ever has been before. It’s easier to get movies made and out there thanks to relatively inexpensive but high-quality digital filmmaking technology and platforms like YouTube and Vimeo that can host those movies for a worldwide audience. That latter upshot is something of a problem, though, as now everything exists in an overwhelming, endless sea of content. Short films, features, music videos, any and all type of visual media is constantly competing for viewers’ time and attention. It’s increasingly rare to find a modern indie filmmaker whose work is inaccessible by now standard avenues of instant gratification, but that’s exactly the space where Mickey Reece works. Reece has directed over two dozen features, but none of them are available on VOD or even physical media. His previous feature STRIKE, DEAR MISTRESS, AND CURE HIS HEART premiered at Fantastic Fest 2018, and this year’s fest brings another world premiere for Reece in CLIMATE OF THE HUNTER. 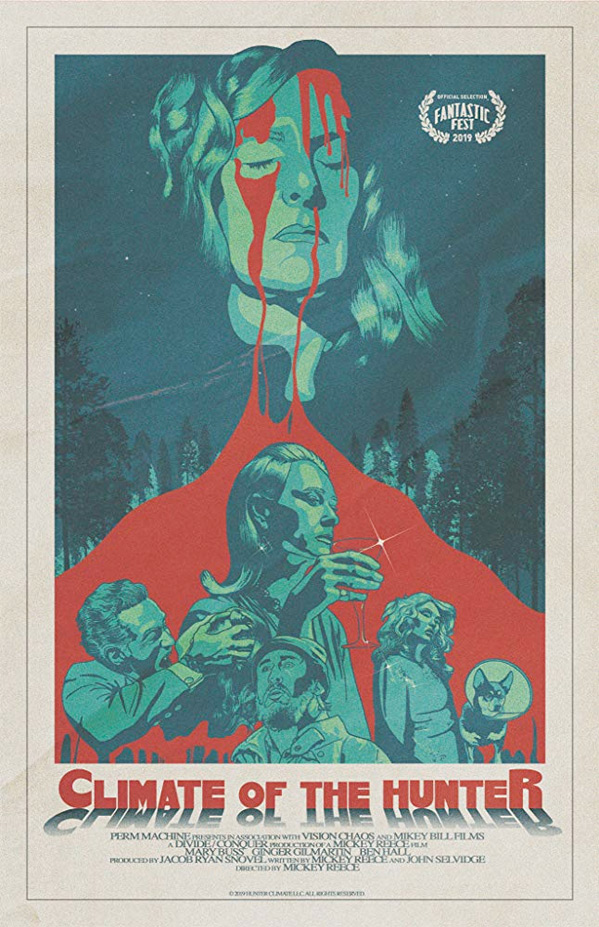 Alma (Ginger Gilmartin) is taking some quiet time in her family’s vacation cabin, where she is joined by her sister Elizabeth (Mary Buss). The sisters have always had a contentious relationship, but some of their deepest-rooted issues are dredged up by the reappearance of Wesley (Ben Hall), a man who knew the sisters when they were all young. Wesley is staying at the house next to the cabin, and his odd routines and behavior have led local weirdo BJ Beavers (Jacob Snovel) to suspect there’s something supernatural to blame. He suggests this while smoking weed with Alma, and soon the seed of doubt starts to take root – especially after visits from Wesley’s son Percy (Sheridan McMichael) and Alma’s daughter Rose (Danielle Evon Ploeger) both end abruptly. Has Wesley returned from his globe-trotting adventures a vampire, or are Alma’s delusions overtaking her reality?

Where STRIKE, DEAR MISTRESS took place mostly in dark interiors, CLIMATE OF THE HUNTER takes Reece’s characters more out into nature. The exterior photography is stunning, so evocative audiences will almost feel the chill in the air. When the action moves indoors, though, this film shares the oppressively claustrophobic atmosphere of that previous film even if the photography is notably warmer. The most definitive link between the two films is Reece and co-writer John Selvidge’s dialogue, packed with left-field turns of phrase and unexpected poetry. The acting style in this film is not quite as intentionally affected as in STRIKE, DEAR MISTRESS, though, giving the proceedings a more naturalistic feel. However, the tonal shifts that marked the previous film are on display here once again, and they don’t quite work as well this time around. This may be mostly due to the fact that the characters seem less like characters and more like real people – a credit to the actors and writing, but it makes for some awkward transitions in tone.

There is no one out there doing quite what Mickey Reece is doing, and working as an independent allows him to take big chances that larger productions could never attempt. The cast is great, the cinematography is gorgeous, and there’s no denying CLIMATE OF THE HUNTER is a distinct step up technically for Reece. This is a unique take on the type of 1970s “psychotic women” cinema that has seen a resurgence as of late, with striking imagery and plenty of curious surprises. Given Reece’s evolution over the last few years, it’s very exciting to see what he’ll do next.