With GWEN being marketed as a Shudder Original, and released to video from the genre-friendly RLJ Entertainment, it would be easy to assume it’s an out-and-out horror film. Its own synopsis includes the words “malevolent presence,” and the cover alone shows a gloomy and dim image of a young girl clutching a crucifix in front of a roaring fire. Having watched the film twice now, I’m hesitant to label it as a horror film, though the act of watching it definitely conjures horror (in a good way). Thanks to its period setting, its ease at earning and establishing dread, and its focus on the slowly dissolving family unit, GWEN comes off as a cinematic soulmate to 2015’s THE WITCH, another film I was hesitant to label as horror…and GWEN contains even less horror than that. 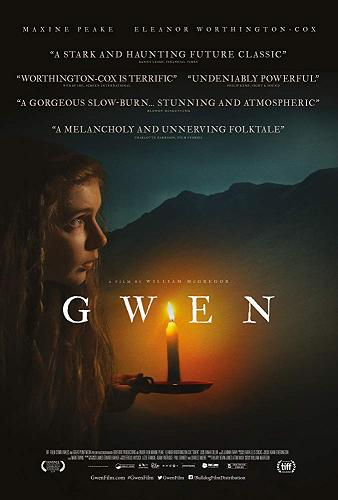 Despite that, GWEN is a solid, well-made, and eerily authentic feature from writer/director William McGregor. Every inch of its running time feels absolutely genuine. The actors, especially young Eleanor Worthington-Cox (THE ENFIELD HAUNTING) as the title character, sell the desperation and despair of this poor family undergoing every possible hardship: the father is missing in action, the mother, Elen (Maxine Peake, BLACK MIRROR), is suffering from a strange illness that causes her seizures, and the family is barely making enough money to scrape by. Bureaucrats in town continue to pressure Elen into selling off the only asset they have left — their house and farm — but she refuses, saying it’s all they have left — that it’s their home. Meanwhile, Gwen takes over her mother’s duties and tries to sell some of their farm’s produce in the town’s marketplace, but shoppers avoid her as if she has a catchable curse.

The moment GWEN begins, the viewer too easily slips into that world, and at no point does something “movie” happen to rip you out of the world that McGregor has created. Again, similar to THE WITCH, the dedication to making that world feel as genuine and realistic as possible is a total success, and it’s every bit as effective as A24’s eerie romp with Black Phillip. From the wardrobes to the accents and especially to the production design, it’s one of the most authentic period horror films you could ever see.

As for the horror aspect, where GWEN may lack in more typical horror scares (THE WITCH comes off damn near mainstream when comparing their horror content), it more than makes up in wallowing despair. Make no mistake: GWEN is certainly not a feel-good movie. If you have patience for slow-burn tales, you’ll enjoy watching it, but you won’t enjoy how it makes you feel. At times, it feels like a triathlon of how poorly things can go for a single family. Its ending, as well, comes off abrupt; when the screen cuts to black at the end, you’ll be waiting for it to fade into the next scene instead of directly into the closing credits.

RLJE’s Blu-ray presentation of the flick is very solid, offering a striking image and very clear and immersive audio. The sound presentation might actually be the sleeper agent of the movie; the quiet ambience and low-key score by James Edward Barker infests your brain and lays most of the groundwork for the film’s focus on despair and futility. GWEN is one of those flicks where the sun never shines, where the world is draped in rainy gray. The picture only ever fills with life a single time–when Gwen is at the doctor’s office begging him for medicine to take home to her mother—it’s the only time the film feels hopeful, and that things might be okay for the family. The Blu-ray contains only two brief interviews with Maxine Peake and Eleanor Worthington-Cox.

If you want a good-time, party-like horror movie, run as fast as you can from GWEN, but if you’re someone who prefers to wallow in the dark, or if you’re especially into period dread, GWEN and her family are waiting for you.

GWEN is now on Blu-ray from RLJ Entertainment.