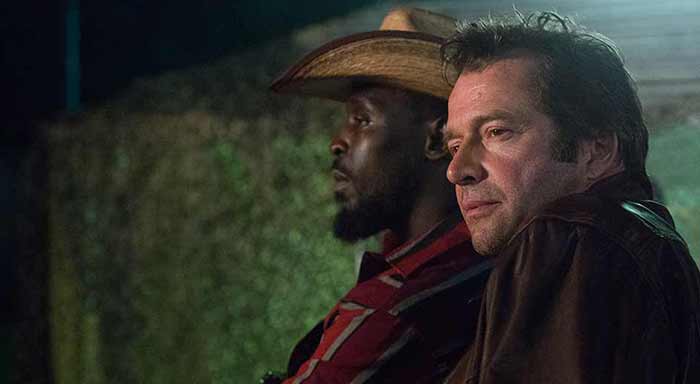 “A stiff dick ain’t got no conscience.” – Leonard Pine

I watch very little television. For the most part, I prefer films or novels because of the finite nature of those mediums. You know when you sit down to watch most films or to read most novels that when you get to the end, the story is as wrapped up as the author/screenwriter/director intends it to be. This, of course, leaves out films and novels intended to be parts of ongoing franchises. But with serialized television, the story can quickly turn into a never-ending soap opera. Even worse, the show can be cancelled with a proper ending never reached. I’m sorry; I just don’t have time to invest in a piece of entertainment that may leave me hanging in the end.

That said, I have made exceptions for recent programs. Most notably, the doomed, but brilliant Hannibal and the still entertaining-as-hell The Venture Bros. Add to that list the newest offering from Sundance Channel, Hap and Leonard.

Joe R. Lansdale is one of my favorite authors. His mixture of menace, horror, and raucous humor never fails to draw me into the worlds he creates. But what I really admire about his writing is the humanity he gives his characters. Even when his villains are doing terrible things, there is a believability supplied to his pulpy tales because the characters are realistic in their flaws. Even better are the heroes who often are good men (with a few exceptions, Lansdale deals almost completely with male protagonists), troubled by their violent impulses. The series of novels centering on the rural East Texas duo of Hap Collins and Leonard Pine are probably the best examples of Lansdale’s ongoing interest in men who are given to fits of violence that often result in fatalities, but are deeply troubled by their natures.

Savage Season, the first book in the series, is the basis for the first season of Hap and Leonard. Adapted by the filmmaking team of Jim Mickle and Nick Damici (who previously adapted Lansdale’s novel COLD IN JULY into a stellar crime drama two years ago), the slender novel of Savage Season seems like a bit of a stretch for even the shorter six-episode season ordered by Sundance Channel. But some fine casting and patient world building established early on help glide the initial offering over some rough patches as the plot slowly takes shape. 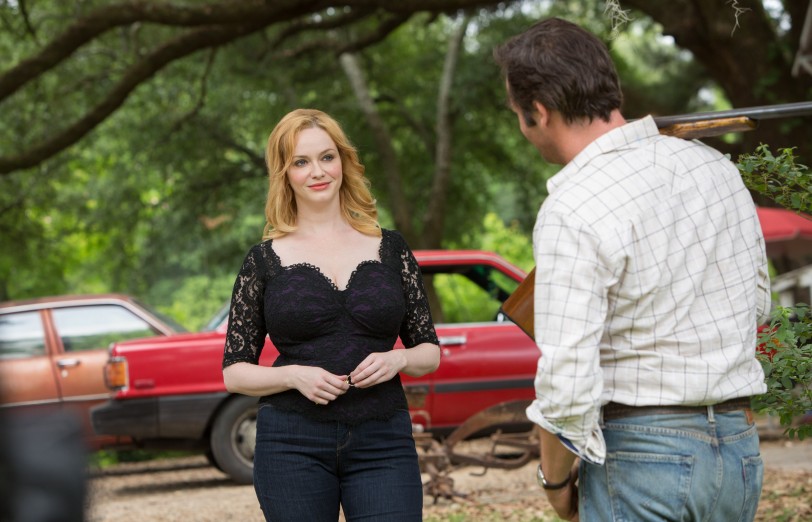 A quick prologue set to Credence Clearwater Revival’s Up Around the Bend, has a pair of bank robbers avoid the cops only to drive off the side of a cliff into the Sabine River. With the slow motion shot of the car going over the side of the cliff and the yells of the men as they plunge toward the river, this opening has a definite Dukes of Hazzard vibe. After a nifty credits sequence built around faux-pulp crime novel covers, the action then jumps ahead twenty years to 1989 and a rose field in LaBorde, Texas where our protagonists are toiling.

Hap Collins (James Purefoy) and Leonard Pine (Michael Kenneth Williams) appear to be a mismatched pair. While they are both in their mid 40’s, the similarities seem to end there. Hap is white, sensitive, straight, and speaks as though he is a little too educated to be doing the back-breaking work of a field-hand. Leonard is black, tough-as-nails, gay, and stoking an anger that lurks consistently just under the surface. But they have an easy rapport, trading good-natured insults and cracking each other up despite the brutal heat in which they work.

After their brief introduction, both men are fired in favor of cheaper labor (it is hard to ignore the potential political commentary made by the implication they are being replaced by illegal immigrants from Mexico, but this is probably not intended), making Hap that much more susceptible to bad ideas when his ex-wife, Trudy (Christina Hendricks), shows up talking about regrets and hinting at rekindling their romance. Leonard is justifiably suspicious, advising Hap to stay away from her, but knowing it will do no good. Sure enough, it does not take long before Trudy has Hap in bed and is recruiting him into a scheme to find the money the bank robber’s stole twenty years before.

Hap, in turn, recruits Leonard, much to Trudy’s chagrin. Leonard, a former Marine who fought in Vietnam, was offended by Trudy’s activities as an anti-war protestor when he returned to Texas and has never forgiven her. That is the story Hap tells. It is clear that Leonard’s anger toward Trudy has more to do with how she dumped Hap years before and that her sudden reappearance seems to be clouding his friend’s judgment. But as quickly becomes apparent, where Hap goes, Leonard will follow, and vice versa.

It does not take long for Hap and Leonard to clash with the rest of Trudy’s crew. There is Howard (Bill Sage), Trudy’s most recent ex-husband, who learned of the money while doing time in Fort Leavenworth penitentiary (“My alma mater,” quips Hap) for vandalizing nuclear power plants; Chub (Jeff Pope), a portly guy prone to spouting pop psychology mixed with ’60s flower power rhetoric; and Paco (Neil Sandilands), a surly man with a badly burned face and dead aim with a crossbow. Other than Howard, none of their roles are firmly established in the plan, but their very existence is enough to rub Leonard the wrong way. Meanwhile, Howard’s passive-aggressive hippie monologues and apparently still close relationship to Trudy gets under Hap’s skin.

With the final scene featuring a violent pair of lovers (Jimmi Simpson and Pollyanna McIntosh), dressed in garish fashions and slitting throats in their search for Paco, Mickle and Damici set the stage for the black comic chaos to come. 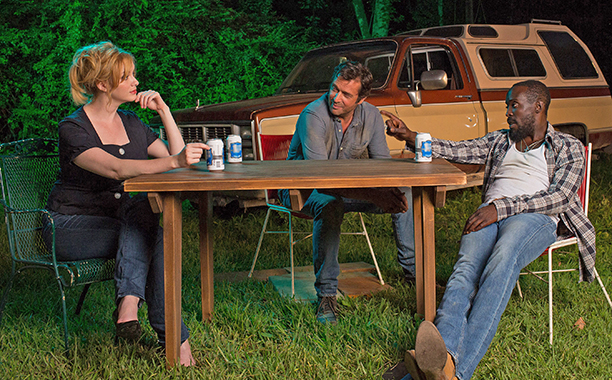 As a fan of the novels, I had high expectations for this first episode. Thankfully, even with some awkward transitions and rushed exposition, those expectations were met.

Purefoy and Williams were not the first two actors that jumped to my mind when news of this adaptation broke, but they fit their characters comfortably. They have a lived-in chemistry and make for an appealing duo whether they are cracking jokes or sparring in full contact mixed-martial arts. Purefoy does a nice job of showing how Hap lies to himself about being satisfied with his life and how much Trudy’s presence reopens some very deep, old wounds. Williams is coiled anger personified, but he still finds a softer side to Leonard, showing the pain he feels when his elderly Uncle Chester (Henry G. Sanders) calls him a “faggot.” It is hard enough to be a black man in rural Texas, harder still to be gay. Leonard has responded to his situation by becoming the toughest son-of-a-bitch around, only allowing himself to let down his guard around Hap. These two men balance each other out and Purefoy and Williams find the reality in their prickly, honestly loving relationship.

The supporting cast is solid with Hendricks giving some sympathetic shading to Trudy when she could have simply come off as manipulative. Sage has fun with the delusional Howard, laying on a smarmy layer to his already obnoxious attitude. And Simpson and McIntosh are flat-out unnerving in their single scene, bringing some much-needed danger to an episode that was heavy on putting building blocks into place, but light on action or menace.

Mickle and Damici nailed Lansdale’s tone with COLD IN JULY, so I had no concerns with their abilities to bring the story to the screen. That said, they do struggle at times in the early going. A scene between Hap and Uncle Chester accomplishes its purpose of explaining the friendship between the protagonists and the lengths they will go to protect each other, but the nature of the scene as necessary exposition renders it a stilted exchange. The same goes for some on-the-nose dialogue explaining Leonard’s issues with Trudy. But this is Mickle and Damici’s first foray into television, so I will cut them some slack. Not only do they capture the overall tone of Lansdale’s novels, they pump up the sweaty, humid atmosphere of East Texas and take advantage of great locations (with Louisiana subbing in for Texas) to build a convincing world with a few quick shots. Thankfully, most of the rough spots are smoothed over by the frequently laugh-out-loud funny dialogue, translating Lansdale’s raunchy sense of humor with ease.

Having read the novels, I can see how Mickle, Damici, and their crew plan to roll out this story so my anticipation is heightened. But I can see how someone who is coming into the series cold can get anxious that this first episode was largely concerned with setting up characters and methodically moving the plot into motion. Even so, you have to admire the patience shown by all involved to take the time to establish two very nuanced protagonists and show a little of what makes them tick. You have to care about these men going forward for the plot to have the proper impact. This episode does that, and more.

Hap and Leonard (Season one, episode one: Savage Season)