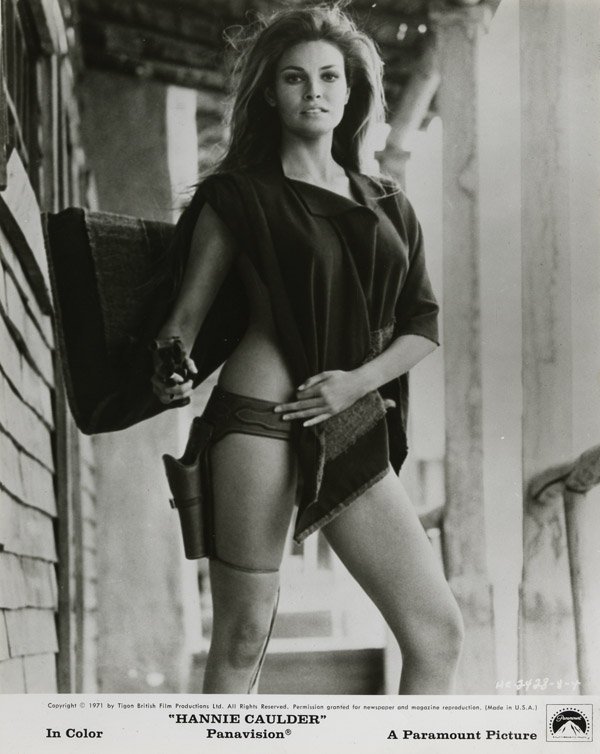 HANNIE CAULDER is a little-known film that very much warrants reappraisal. Directed by journeyman filmmaker Burt Kennedy, who also wrote the film under the name Z.X. Jones, it was released in 1971, at a time when Hollywood Westerns were winding down and European-made Westerns still had about a decade of life left in them. HANNIE CAULDER is one of the few Westerns of any origin to feature a female lead – and not just any lead, but Raquel Welch, one of the major sex symbols of the twentieth century. Olive Films recently unearthed HANNIE CAULDER and released it on DVD and Blu-Ray, which provides the optimal occasion for a reconsideration of the merits of both the movie itself, and its incredible star. 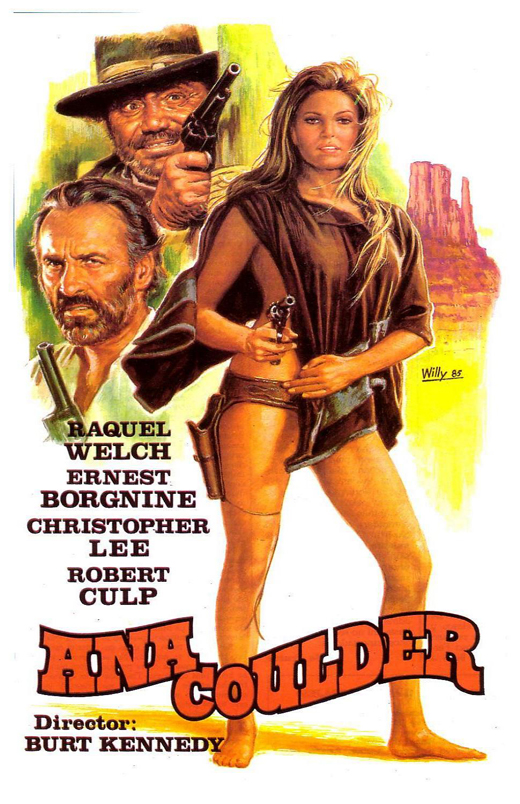 One could be excused for mistaking HANNIE CAULDER for a “spaghetti” Western, but it’s more of an anomaly. It was financed by a British production company, written and directed by an American, and features a cast primarily made up of American stars from the era, with one wonderful British exception. But HANNIE CAULDER sure acts and sounds like spaghetti: It was shot in Almeria, as so many Italian-made Westerns of the time were, and its bold, sometimes quease-inducing sexual politics recall the work of Sergios Leone and Corbucci. 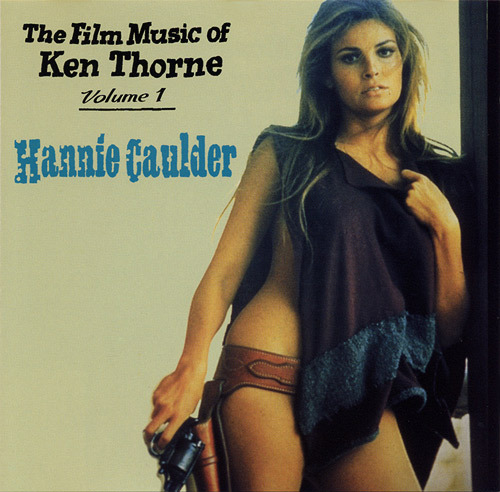 In keeping with the “spaghetti” Western rope-a-dope, the film opens on drawings of Raquel Welch in costume as Hannah “Hannie” Caulder, over titles and the fanfare of the main orchestral theme by Ken Thorne. Thorne’s work in this film is solid – the theme is rousing, and the jarring peals of strings he uses for the violent scenes are effectively unsettling, if repetitious. But he’s no Ennio Morricone, and neither is Burt Kennedy much of a Leone or Corbucci. After a striking shot of a bank robbery shown through the barrel of a shotgun, which happens in the movie’s first scene, Kennedy doesn’t have much visual ingenuity in the tank. The film’s visual appeal falls largely to the Spanish locations and the pulchritude of the star – what makes the film a unique prospect isn’t its visual distinction.

Jack Elam as Frank, Ernest Borgnine as Emmett, and Strother Martin as Rufus.

HANNIE CAULDER begins with a very traditional incident, a bank robbery, carried out by a trio of bandits known as the Clemens Brothers – Emmett (Ernest Borgnine), Frank (Jack Elam), and Rufus (Strother Martin). These three actors were very popular character actors at the time, all three had done their share of playing thugs and heels in Westerns and in plenty of other genres, yet still I think this is coded casting. Ernest Borgnine and Strother Martin were both key players in Peckinpah’s THE WILD BUNCH (1969), and Jack Elam of course made a memorably brief appearance in Leone’s ONCE UPON A TIME IN THE WEST (1968). Those are the key movies that I believe we’re supposed to think of, when we first see these guys here. Both of those earlier films were among those considered to be the “death knell” of the Western – after these two uncommonly epic and elegiac movies, the consensus goes, there wasn’t much left to say. And the consensus was largely correct, Eastwood aside. By casting these guys as a band of violent outlaws, HANNIE CAULDER is using their recognition as a jumping-off point. Sure, we’ve seen it all before, but we haven’t seen these guys go up against a girl yet. And by the way, these are some bad dudes. We should worry a little about that girl when they go after her.

After the robbery, the Clemens Brothers come across a waystation, and its manager, one Jim Caulder. Rufus, the most impetuous of the three bandits, shoots Jim down for no great reason and goes into his house, where he spots Jim’s young wife, Hannie. Rufus looks her up and down, calls to his brothers, and deems her “supper”. In a troubling scene, the three men take turns raping Hannie, and when they’re done, they leave her behind, setting fire to the cabin by accident and wandering off as it burns.

Now, this scene is troubling for several reasons. Foremost among them, personally, is that I have a low tolerance for stomaching rape scenes of any kind. It’s a personal hang-up that I don’t think is a bad thing. Not that anybody particularly enjoys seeing them, but I have a real visceral reaction. The next element that makes it tough is that these three perpetrators are made to appear particularly repellent, even by the standards of most cinematic rapists. I have great affection for Ernest Borgnine, Jack Elam, and Strother Martin as actors, but none of them were ever considered pin-ups, and this movie goes to great lengths to make them look as filthy and ogreish as inhumanly possible. You feel like they’re not just violating here, they’re fouling her.

But the most gnawing issue is that these three characters, both before and after this scene, are largely comical figures. They call each other “dummies” and that’s one of the few things they get right. They’re morons, on a relative scale of intelligence with Emmett being the “smartest”, Rufus being the “stupidest”, and Frank falling somewhere in the middle. They’re a bit like the Three Stooges, if the Three Stooges were filthy rapists. That’s one half of the issue. The other side is that Raquel Welch, as she appears in this movie, has rarely looked better. The first time we as an audience see her is the first time the Brothers see her, and if we’re men, our thoughts probably are going to our most wolfish nature. No one wants to see her hurt, but we are definitely thinking really strongly about sex. This is a problem of tone – and it didn’t help matters that in some of the promotional images at the time, the three villains were shown gathered around Raquel, smiling like buddies. 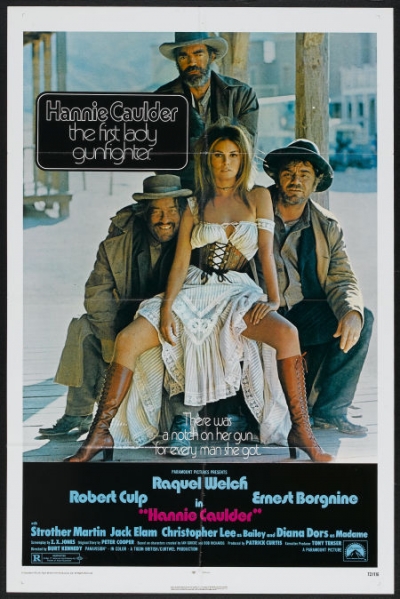 Complicating matters further is what happens next. Almost immediately, a bookish gunfighter, Thomas Luther Price (Robert Culp) happens upon Hannie and after a very brief period of mistrust, agrees to help her seek revenge. He trains her how to shoot, and helps her get cleaned up and on her feet. Very soon after that, when they reach town, we see Hannie, naked from the waist up (shown from behind), soaking in hot water to shrink a man’s pair of pants in order to fit her womanly form. In other words, our female lead is still alternately a sex object who needs the help of a man. (Two men, actually, since there’s also a mysterious black-hatted gunman known as “The Preacher” who appears throughout the movie to aid Hannie, only to disappear inexplicably.) The movie was bold for 1971, but it still wasn’t as far down the cultural-progression line as it could have been. If I could suggest an alternate-universe script fix, I’d start the movie with Hannie and her husband Jim (rather than with the bank robbery scene), maybe with a scene where he’s training her to shoot. This way she’d be more a character than an image. 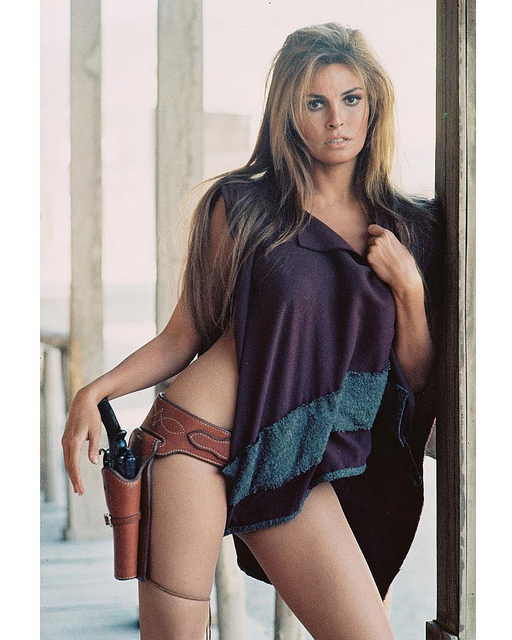 That said, it’s a solid image. And the movie gets more fun from there. For one thing, Robert Culp is just as cool here as he was in HICKEY & BOGGS. He’s one of those actors who you forget how much you like until you see him pop up in something unexpected like this. If HANNIE CAULDER needed a male sidekick, best that it were this one. Luther Price cuts more of an interesting figure than a traditional bland hero-type – Culp just plays him smarter, less distracted by Hannie’s looks than a typical guy would be, more aware that vengeance is serious business. And how many times have you seen a gunfighter with glasses?

Robert Culp as Price and Raquel Welch as Hannie.

There’s also a musical cameo from flamenco guitarist Paco de Lucía (who did the terrific music for Stephen Frears’ THE HIT), but the most unexpected appearance in HANNIE CAULDER comes from the legendary Christopher Lee, who plays a gunsmith and old friend of Price’s, to whom Price takes Hannie in order to get the quality of gun she’s going to need. Christopher Lee plays this calm, charming guy who moved down to Mexico, lives on the beach, and just happens to make guns when he’s asked. It’s a lot of fun to see this screen legend out in the daylight, and he gets one of the movie’s best lines too, in regards to the lady in the title:

Eventually, appropriately, it all comes down to Raquel. This is an important film in her career, and if HANNIE CAULDER is less remembered than it could be, it isn’t through any fault of hers. It’d be nice if the image of Raquel in her gunslinger’s poncho, echoing and flipping the iconic image of Clint in the Dollars films, were anywhere near as famous as the image of her in that fur bikini from ONE MILLION YEARS B.C. In general, I don’t think Raquel gets half the credit she deserves. America continues to be so obsessed with Marilyn Monroe (this 2012 Vanity Fair cover, Lindsay Lohan’s Playboy shoot, Michelle Williams’ awards tour for MY WEEK WITH MARILYN, NBC’s Smash) that in my opinion we really undervalue what Raquel Welch represented. Marilyn was great, but she was a very girlish kind of sex bomb, she allowed her image to be idealized – Raquel is something different. There’s nothing girlish about Raquel. Raquel was a WOMAN. 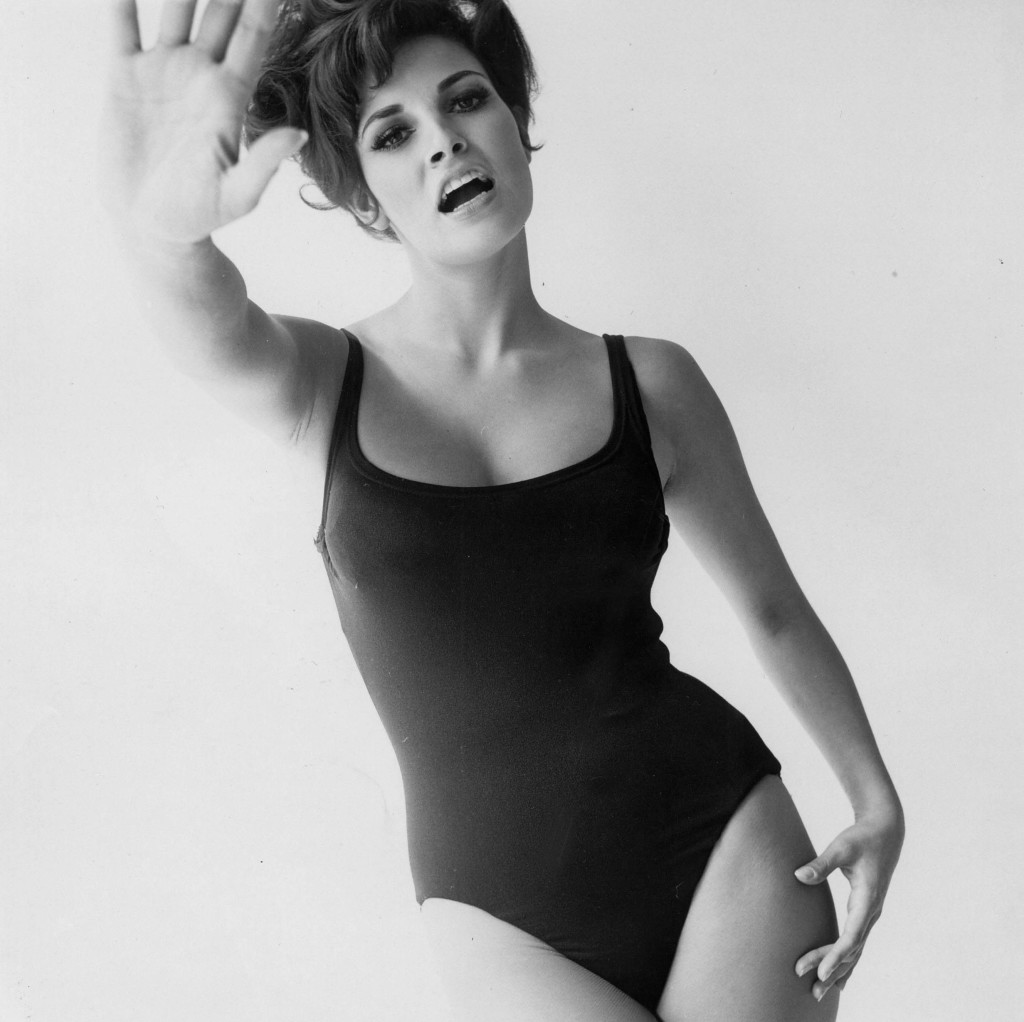 Raquel can’t quite be described as idealized – she’s sexy as hell, no escaping that, but whatever idea you have about her, she’s going to fuck with it. That’s what eventually happens in this movie – Raquel is objectified at the start but by movie’s end, she asserts herself so much that she’s absolutely convincing as a merciless, effective Western gunfighter. Had she lived, you’d never see Marilyn Monroe in a movie like HANNIE CAULDER. You’d never see one of the more acting-heavy stars, your Hepburns or your Streeps, in such a film either. 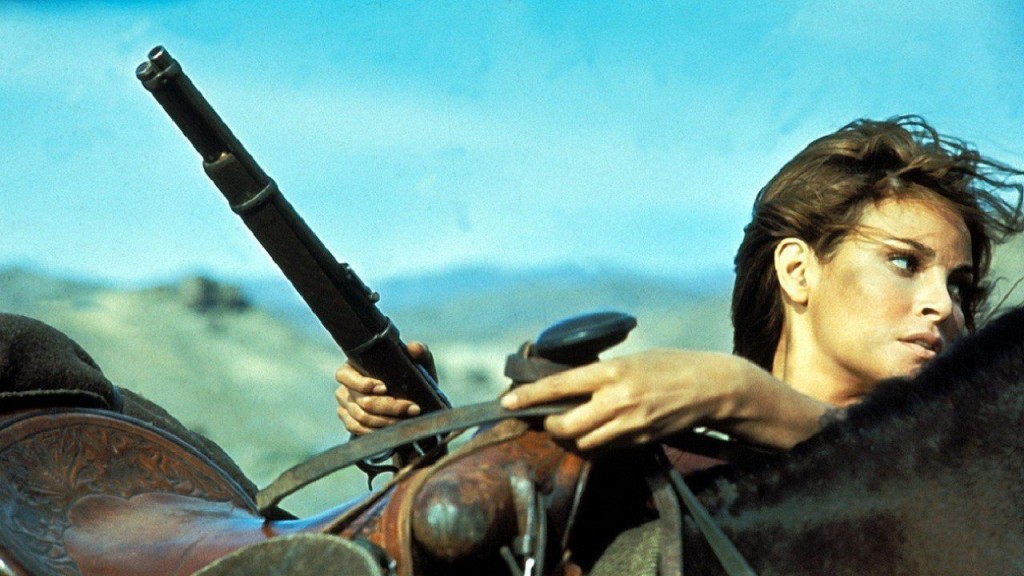 People can denigrate Raquel’s range all they want, but I think she has something more interesting going on here, an aggressive kind of femininity that can absolutely stand up to the masculine forces in her way. She brings HANNIE CAULDER to genuinely iconic heights by story’s end. Also, she was always more welcoming of her gay fanbase than any other female star of her stature – or maybe I’m not reading “the perfume salesman” right.

Ultimately, HANNIE CAULDER isn’t quite as good a film as it needed to be for people to recognize what Raquel brought to it. It’s more than serviceable, with a great cast and a solid (if uninspired) plot, but again – and no offense – Burt Kennedy is no Sergio Leone. HANNIE CAULDER had to be better than just “good” to be remembered. It had to be mythic. And it’s not. I look at what Leone did with Claudia Cardinale in ONCE UPON A TIME IN THE WEST, and then I look at Raquel Welch in HANNIE CAULDER, and I see the potential lost in between. Raquel needed the kind of heroic framing that John Ford used to make John Wayne look so legendary, she needed the kind of clever one-liners Clint was handed on a routine basis. In HANNIE CAULDER, the presentation is fairly conventional and the men get the majority of the good lines. It’s entertaining but it could have been far more so, in fairly obvious ways. That said, there’s no time wasted watching HANNIE CAULDER. It’s a misfire, but it was a shot well worth taking.