Not only is today Friday the 13th, but today also marks the release of the huge FRIDAY THE 13TH: THE COMPLETE COLLECTION, giving horror fans more campside carnage that you can shake a sex-crazed teenager-filled sleeping bag at. With this holiday in mind, I wanted to take a look at a film that’s nowhere near this collection – the one where our hockey mask-wearing, camp counselor-slashing maniac takes off his affectations and exposes the man underneath, who finds love in the arms of a young blind woman.

UNMASKED PART 25 isn’t commonly mentioned in the roster of slasher film parodies. Sure, pieces like this one regularly name-check the likes of WACKO, STUDENT BODIES and PANDEMONIUM, but the 1988 London-lensed flick shot under the title THE HAND OF DEATH has fallen through the cracks of fandom into obscurity. 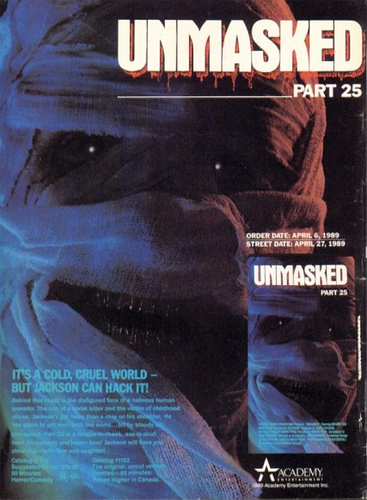 It could be because UNMASKED isn’t exactly a parody of slasher films, and you won’t find goofy jokes and Zucker Brothers-esque sight gags here. Instead, the script by Mark Cutforth and the direction of Anders Palm (who also collaborated on the Brad Dourif serial killer film MURDER BLUES) embrace the ideas of the slasher movie in order to make a wry satire, one that treads the line between humor and horror so carefully that it’s not entirely surprising that many viewers didn’t quite know what to make of it. It was released, after all, nearly a full decade before SCREAM and long before BEHIND THE MASK: THE RISE OF LESLIE VERNON and CABIN IN THE WOODS solidified the idea of meta-horror, even predating Rolfe Kanefsky’s THERE’S NOTHING OUT THERE by three years.

The film’s slasher origins are apparent from the first scenes. A couple arriving at a party gets a fake scare, courtesy first an old man who warns them of impending doom, then a prankster. As the couple make their way into the party, the prankster (played by Christian Brando, under his “Gary Brown” pseudonym) is attacked by a hockey-masked killer, and ends up with his face ripped off and his beating heart ripped from his chest! 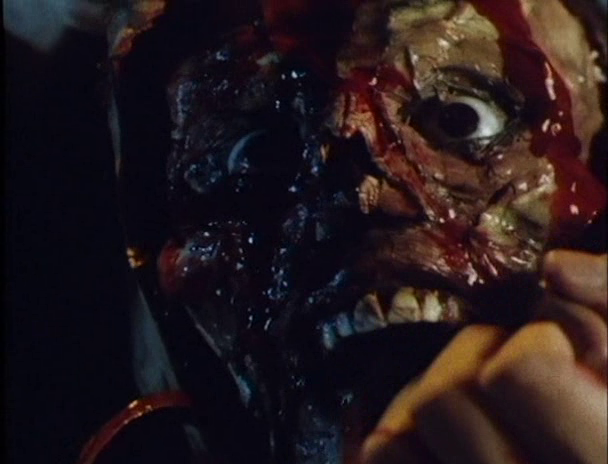 Our killer works his way through the rest of the party in true slasher movie fashion, and for the first fifteen minutes, you could be excused for thinking you’re watching a standard FRIDAY THE 13th rip-off, and a particularly gory one at that. This all changes, however, when the final girl of the party, a blind woman oblivious to the carnage all around her, senses the murderer in the room and introduces herself as Shelley, extending her hand in greeting.

After our masked man drops the knife he’s about to use on her and wipes off his hand as a gentleman should, he grunts his way through a greeting, and the woman interprets this as him being a mute. Being open to new experiences, she invites him back to her place for tea. Only then does he start talking, and in a well-spoken British accent, he introduces himself as Jackson and takes off his hockey mask to reveal (to the audience, anyway) his hideous visage beneath, and the relationship blossoms from there. 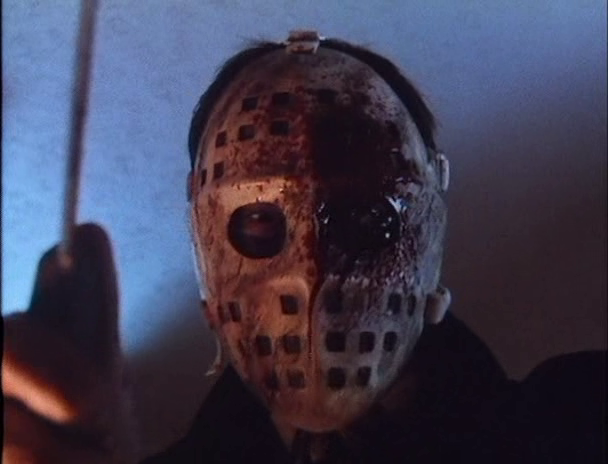 The middle of the film follows the relationship between Shelley and Jackson, and the latter talks about his terrible childhood of having been shipped off to the United States to get away from his abusive father, only to be left for dead by drowning. You can fill in the rest – his mother tried to avenge him, but ended up dead, and he’s spent much of his life slaughtering camp counselors because it’s something he has to do.

Jackson, you see, has always hated wearing the mask and only did it “because people expect it.” He’s has educated himself using the books left by the murdered camp counselors, and he just has never had anyone who would talk to him, finally getting a chance to show his intellect by wooing Shelley by reciting Byron to her, spurring a discussion of the poet’s literary merits. 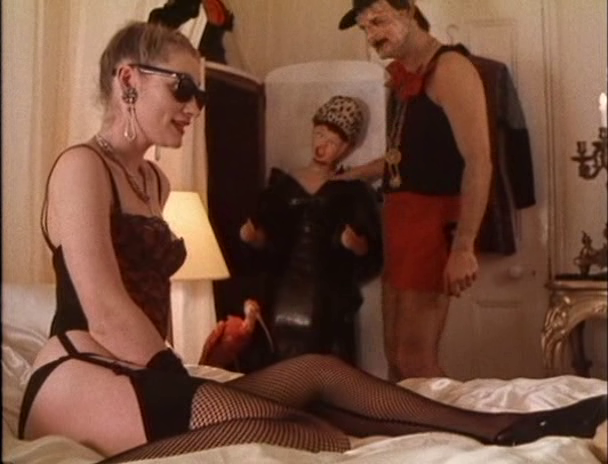 The burgeoning relationship isn’t without its share of problems. For one thing, Shelley’s got a kinky side that Jackson has trouble reconciling, and he soon finds himself uncomfortable in the dominating role. For another, Jackson now lives with his abusive father, who chastises him for losing his mask and tells him that he should have been killed years ago. It’s awkward at best, especially in an apartment filled with corpses (Shelley is clearly never invited over), and it does end in an impressively bloody fashion.

The same can be said for the film itself, as after Jackson takes off for a time, he makes the acquaintance of another group of irritating young people, and soon enough instinct kicks in and the cycle begins again. It ends in a suitably downbeat manner, emphasizing the idea that the slasher villain is an unredeemable archetype, inevitably committed to violence despite any attempt at humanity. While the plot shares some similarities with THE TOXIC AVENGER, UNMASKED is considerably darker in tone than the mirthful chaos of any in-house Troma production. 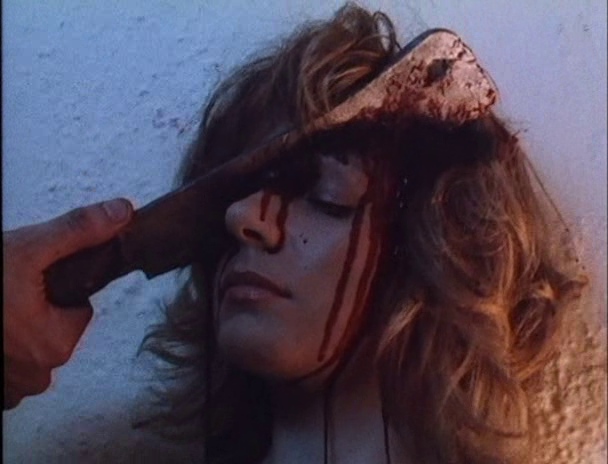 This isn’t to say that UNMASKED is all doom and gloom. It’s certainly among the blackest of black comedy premises, but the performances of Gregory Cox and Fiona Evans as the leads, along with Cutforth’s quick-witted script, give the pathos on display a note of levity. It helps that Palm’s direction plays the premise perfectly straight, and both the gore and make-up on Jackson (courtesy Cliff Wallace, Stuart Conran and Brian Hill, who’d honed their talents on HELLRAISER, WAXWORK and LAIR OF THE WHITE WORM) is more convincing and graphic than any of the FRIDAY THE 13th sequels being churned out at the time.

The humor, instead of coming from gags, comes naturally from the situations and characters. The meshing of sex and violence inherit in the genre comes to the forefront as Jackson nonchalantly smokes a cigarette (through his mask) after one of his kills, several future victims confuse him with an actor portraying him in a film series, and one lass implores him, “Everyone has a bad day now and then, but killing people isn’t going to solve anything!” She then offers to give him a blow job. 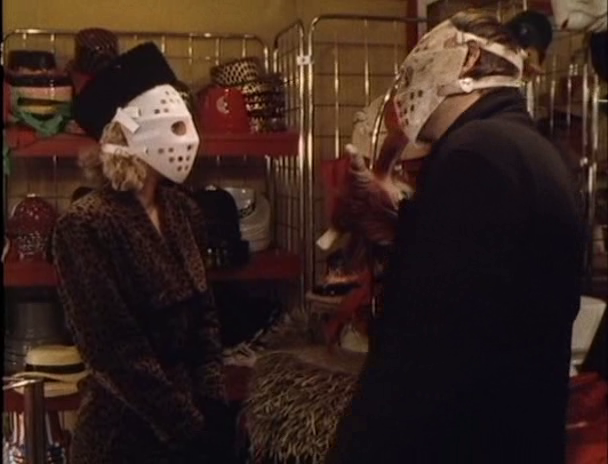 UNMASKED PART 25 satisfies the requirements of a standard slasher film, offering up enough gore and nudity to please any fan of the genre, while adding a smirking, character-driven sense of humor that would seem to make to make it ideal for rediscovery for modern audiences. It’s got all of the charms of the ‘80s slasher era with a unique (and, despite what one would expect, consistent) tone, solid performances and genuinely clever ideas. Sure, the supporting cast of victims are interchangeable and annoying, but I’d argue that they’re supposed to be, as in the end, everyone on screen is just fodder for the slaughter mill.

Sadly, it’s yet to be issued on DVD, though someone has uploaded the entire film to YouTube here from the (unrated) VHS released by Academy Home Video a quarter-century ago. (An R-Rated release was also issued, but I can’t say I’ve seen it anywhere in the wild. I don’t think this was picked up by Blockbuster at all.) The film’s theme song by Stereo MCs (!) and Cesare can be listened to here as well, and has a charm of its own. Maybe Shout Factory, Raro or Vinegar Syndrome can grab this one from obscurity and let the world see the emotional torment that our favorite hockey-masked serial killer is truly going through. 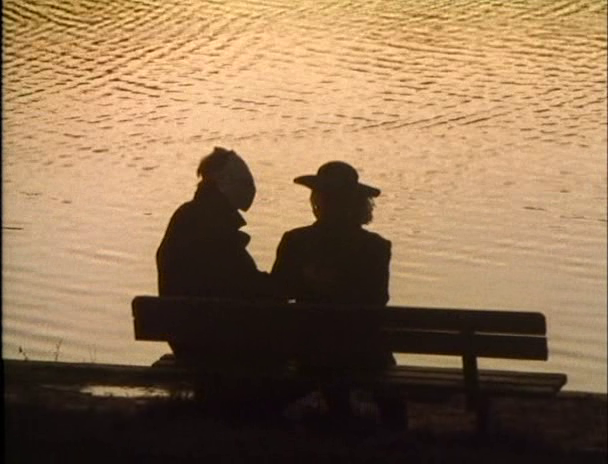