HOBO WITH A SHOTGUN stars the great Dutch actor Rutger Hauer (known for BLADE RUNNER, BATMAN BEGINS, and more Paul Verhoeven movies than most know about) as a probably-bipolar homeless man who yearns to earn fifty dollars so that he can buy a lawnmower.

Along the way, he befriends a pretty hooker who pronounces the word “about” as “aboot” — seeing as how the film was shot and cast in Canada — and makes enemies of a man who calls himself “The Drake”, who rules the nowhere-town in which the movie takes place, alongside his two psychopathic sons, all three of whom indulge in random, elaborate, deranged acts of violence.  These acts include using human beings as piñatas, decapitating men using manhole covers (very THEY CALL HER ONE-EYE), taking a flame-thrower to a schoolbus, and, once the titular hobo gets on their bad side, declaring war on all homeless people everywhere.  They shouldn’t have done that.  The Hobo With No Name is the wrong guy to provoke.

This movie is unreviewable, in any conventional sense.  You can talk about what kind of expectations you had before seeing it, and about what kind of experience you ended up with afterwards, but if you start talking with any degree of seriousness about what it means thematically or even where it stands in the context of the many movies it references, you’d be engaging in a fool’s errand, probably to the delight of the talented maniacs who made it — namely, writer John Davies and director Jason Eisener. 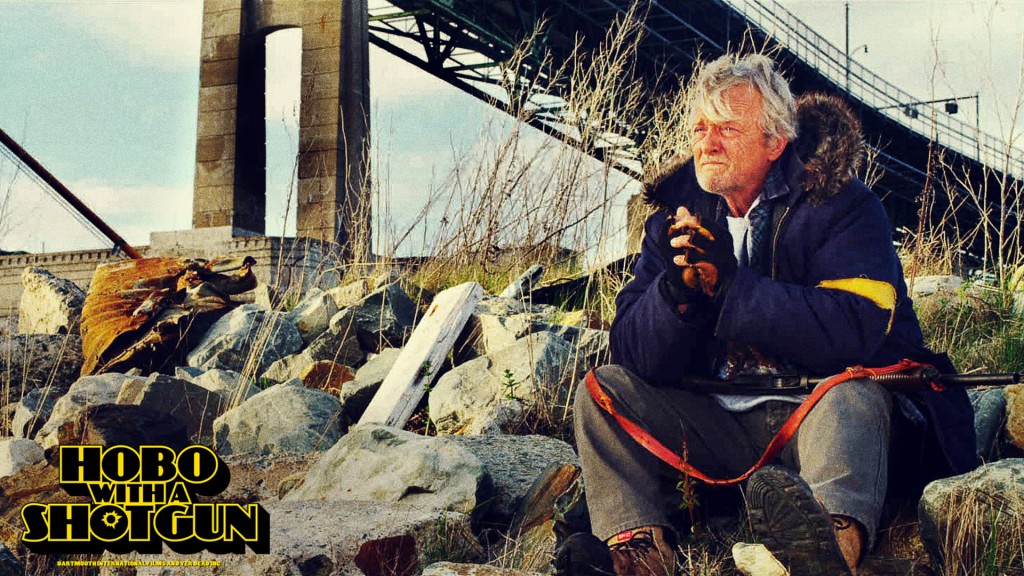 HOBO WITH A SHOTGUN began life in affiliation with 2007’s Grindhouse, the movie by Quentin Tarantino and Robert Rodriguez, as a trailer that screened at some theaters alongside the contributions by Rob Zombie, Edgar Wright, and Eli Roth.  HOBO WITH A SHOTGUN has in common with the work of all those other guys a primary influence in the less reputable areas of American cinema, most obviously ‘70s grindhouse pictures and ‘80s action movies and revenge flicks.

The one movie that HOBO WITH A SHOTGUN reminds me of more than any other is 1987’s STREET TRASH, a movie that takes the garish aesthetic of Garbage Pail Kids and lays an R-rated sensibility on top of it.  I have to figure that this would be a huge compliment to the makers of HOBO WITH A SHOTGUN, and it’s very much meant as one.

(Yes, that IS a human being collapsing into a toilet.)

It was an inexplicable achievement for these filmmakers to land Rutger Hauer as the lead for this movie, and a true masterstroke.  Hauer has starred in movies as great as BLADE RUNNER and as silly as BLIND FURY, but to me he always brings a nobility and a dignity and a European classiness that is absolutely the opposite of everything that happens in HOBO WITH A SHOTGUN.  That dissonance is what gives this movie the bizarre electricity that is has.  There’s not a genuinely serious moment in this movie, and it’s a rare case where that’s not a problem.

HOBO WITH A SHOTGUN is chaos.  It’s underground comix.  It’s lawless and ugly and brightly-colored and stupid and thoroughly hilarious.  If you’re the right kind of sick, you’ll enjoy it.  If you’re “normal”, you’ll be disgusted.  You might also be boring. For me, HOBO WITH A SHOTGUN was at least 75% joy.  It’s got a little too much of stuff I don’t like (extreme violence done to the people in the movie who don’t deserve it, specifically women), but it’s got plenty more of the kind of stuff I love (bizarre humor, random cameos by weird monsters, and insane supporting characters.)  Let’s bust that last bit – “insane supporting characters” – out of the parenthetical in order to talk about The Plague.

At a certain point in the movie, The Drake and his two sons decide that The Hobo is too much for them to handle, so they call in these two hitmen to unleash hell.  The Plague are two armor-wearing, motorcycle-riding, weapon-wielding madmen who lift the movie, which was already pretty memorable, into something delirious, truly stupid, and transcendent.  The Plague seem to arrive from some other movie, or some alternate universe where a print of THE ROAD WARRIOR hate-fucked a TRANSFORMERS Blu-Ray and then brought these living action figures to term.

When these guys show up, the very musical score of the movie is altered and the level of filmmaking competence kicks up a notch.  Somehow there’s a clip on YouTube – I share this with you only as a method of gauging whether or not you want to see where things go from there (PLEASE NOTE: This is NOT safe for work, unless maybe if you work at Jumbo’s Clown Room):

Personally, that kind of makes me want to see HOBO WITH A SHOTGUN again.  I guess I can understand if you feel differently.

Actually, no. No, I can’t. You should want to see this movie by now.

P.S.  I typed “HOBO WITH A SHITGUN” approximately fifteen times during the writing of this piece. What the hell is a “shitgun?” Sounds like something from the deleted scenes of STREET TRASH… 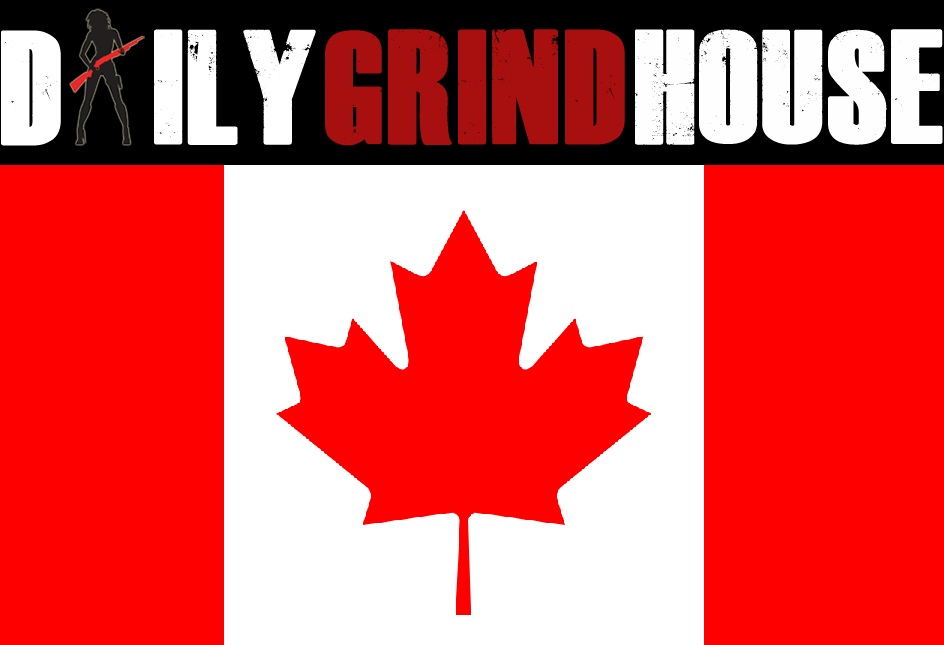