His latest effort is a personal project three and a half years in the making. “Heavy Metal Movies: Guitar Barbarians, Mutant Bimbos & Cult Zombies Amok in the 666 Most Ear- and Eye-Ripping Big-Scream Films Ever!” is a colossal compendium of cinematic carnage, a musical mélange of movie mayhem that should serve proudly on the shelves of every at least semi-literate cult movie fan. Ideally, it will be place next to their copy of “Destroy All Movies!!! The Complete Guide to Punks on Film,” Zack Carlson and Bryan Connolly’s guide to the world of, well, punks on film, which served as an inspiration for McPadden. (You can also set it next to McPadden’s earlier “If You Like Metallica,” a guide to notable cultural artifacts to seek out if you, er, like Metallica. All books should be titled this simply.) 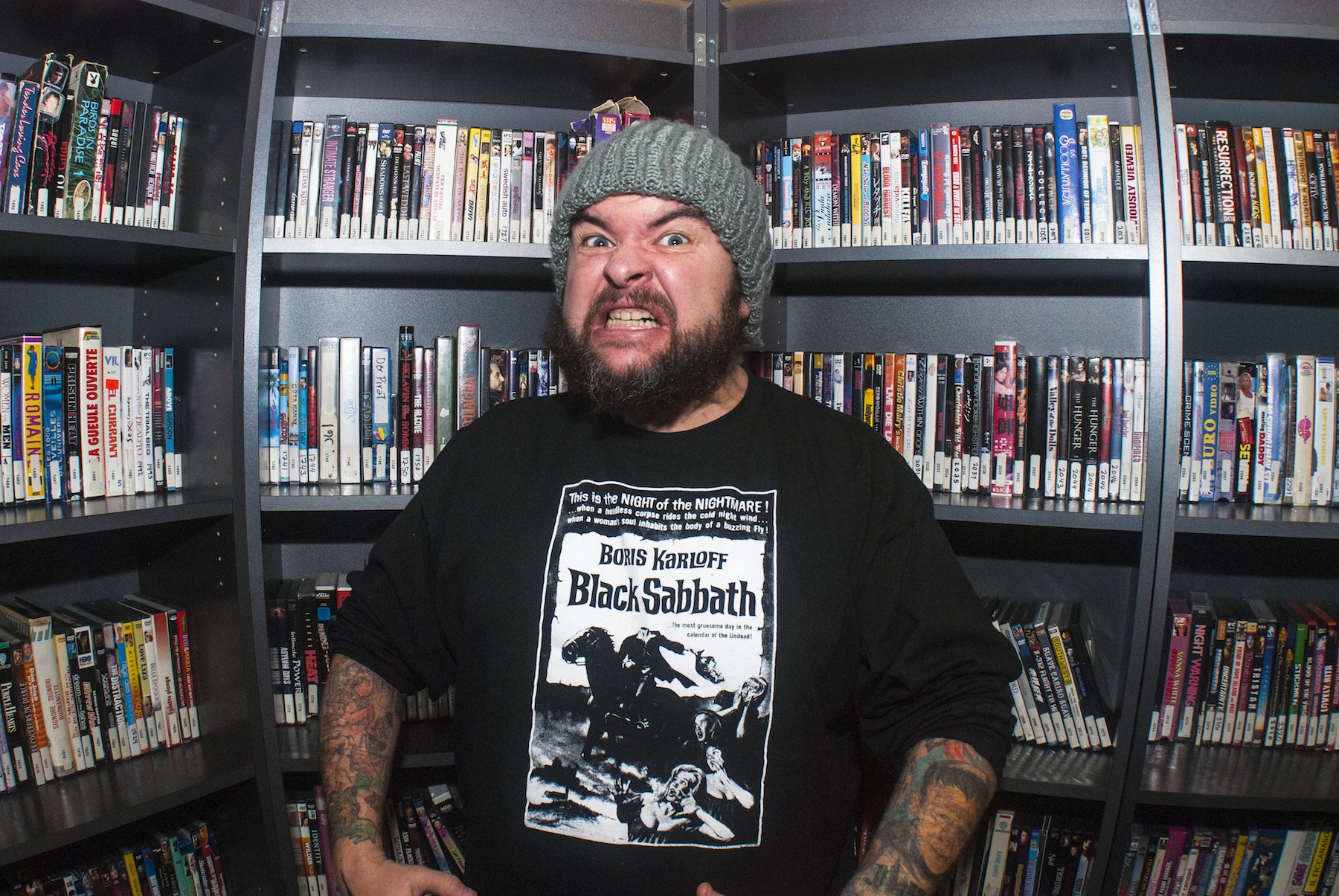 We had a chance to talk to McPadden about the book, defining metal movies, working with Gregory Dark and more. Keep up with him on his site here, and buy “Heavy Metal Movies” at your earliest convenience, if not sooner.

DG: What makes a metal movie?

MM: It’s a matter of levels. First, and most obvious, there are documentaries and concert films—ANVIL: THE STORY OF ANVIL, AC/DC: LET THERE BE ROCK or, for that matter, METALLICA: SOME KIND OF MONSTER and METALLICA: THROUGH THE NEVER. Next, there are narrative movies that focus on heavy metal music itself—THIS IS SPINAL TAP, AIRHEADS, all those great, loony ’80s heavy metal horror movies like BLACK ROSES, ROCK’N’ROLL NIGHTMARE and TERROR ON TOUR. From there, it’s films where characters love heavy metal—Wayne and Garth, Bill and Ted, O.D. from TERRORVISION, Terry from THE GATE. Then you’ve got movies where metal musicians are in front of or behind the camera—Alice Cooper in MONSTER DOG, PRINCE OF DARKNESS, DARK SHADOWS; Cannibal Corpse on stage in ACE VENTURA; all the movies directed by Rob Zombie. After that, it’s movies name-checked by bands in song lyrics of their own monikers. BLACK SABBATH, most prominently, is named after a 1963 Mario Bava horror anthology with Boris Karloff. Soundtracks dominated by heavy metal certainly qualify, like the Dokken hit “Dream Warriors” from A NIGHTMARE ON ELM STREET 3, and AC/DC providing all the songs for MAXIMUM OVERDRIVE.

Once you’re past those with a concrete connection, it becomes about genres that typify heavy metal aesthetics and subject matter: occult thrillers, sword and sorcery, post-apocalypse sci-fi, extreme gore cannibal and zombie epics, ’80s slasher films; and then you just get into “I know it when I see it territory.” 2001: A SPACE ODYSSEY and PLANET OF THE APES are cornerstone Heavy Metal Movie classics—because they are. That level is akin to the way you can listen to Deep Purple, Cinderella, Deicide, and Mastodon, and inherently experience each of them as practitioners of heavy metal. 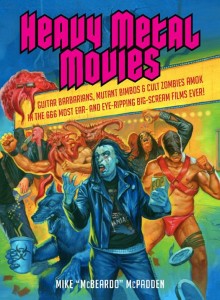 DG: What inspired you to put together the book? How did you want to make sure it was distinct from “Destroy All Movies?”

MM: In 2009, I contributed two chapters to The Official Heavy Metal Book of Lists by Eric Danville: “The 13 Greatest Heavy Metal Horror Movies” and “The 13 Most Metal Moments in Non-Metal Movies.” A germ took hold.

Then, a couple of years later, I was schnockered to smithereens by “Destroy All Movies: A Complete Guide to Punks in Film.” I recognized it right there in Quimby’s book store as a masterpiece and I announced on the spot that I was heading home to write the heavy metal answer book, and that I hoped it would be for Bazillion Points. The better part of four years of nonstop effort later, that’s what happened.

DG: Some of your inclusions have a fairly tenuous connection to metal — what made you decide to include films like BAD RONALD or CAPTAIN CLEGG?

MM: BAD RONALD made a deep impact on underground culture, frequently being cited and invoked in metal and punk circles as a favorite made-for-TV wonder that, while dated and goofy, does touch viewers of a certain stripe in some recognizably uncomfortable places. Its spirit is metal and, like Joe Spinell’s character in MANIAC, I always feel like Ronald would have been okay if he’d just discovered heavy metal before his mental train so completely jumped the track. Think of the concept album he could have delivered—“A Secret History of Atlanta” by his band, Prince Norbert!

CAPTAIN CLEGG is spooky, gothic, and British. The mighty doom band Cathedral immortalized CAPTAIN CLEGG in a song by that name, too. 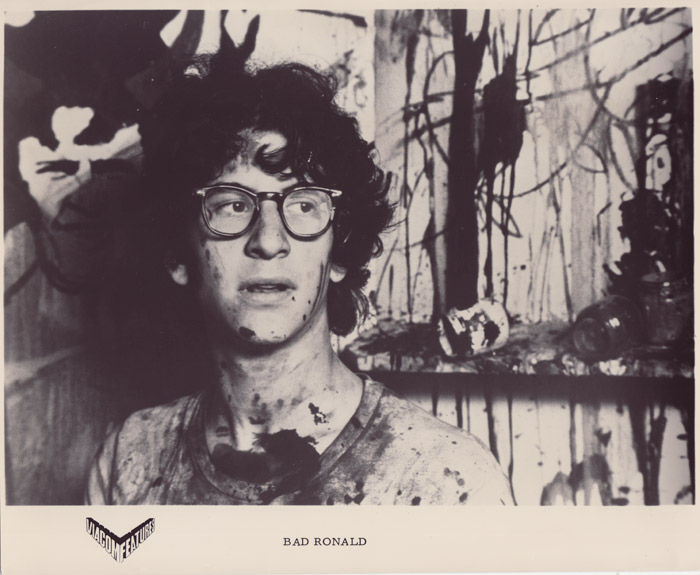 DG: Why is GREMLINS 2 one, but the original GREMLINS isn’t?

MM: GREMLINS 2 prominently showcases “Angel of Death” by Slayer during a scene parodying the Nazi dentist torture segment of MARATHON MAN. The original GREMLINS does not.

DG: Was it tough to track down some films? I was impressed with your inclusion of obscurities like THE BUTTERFLY BALL or DEAD GIRLS.

MM: “Tough” is a relative term. Virtually every film I wanted to see was easily obtainable online. If it got challenging, I just put the word out for a particular title on Facebook and Twitter, and people emailed me what they had. As a result, I genuflect at the feet of anyone who completed any kind of reference guide in the days before the Internet.

DG: Your write-ups of most of the films are big on information and presented really entertainingly, and it always feels like you’re genuinely enthused about even the lowest caliber of these flicks. Was there a deliberate tendency to not make them feel liked “reviews,” like you’re casting negative judgment on the films themselves? I mean, you even find nice things to say about DEATH METAL ZOMBIES! 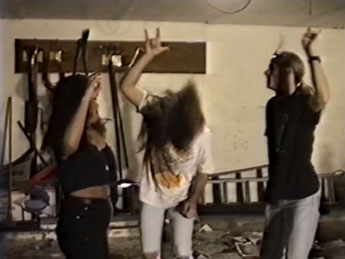 MM: In 1996, a writer named Darius James authored a book titled “That’s Blaxploitation!” It’s a weird book in terms of being a genre overview, but that’s fine. What I never thought was fine, though, was the fact that James repeatedly points out in the text how much he hates the movie SHAFT. My feeling was: okay, that’s you—but who are you writing the book for? It felt very much like he was sneering at those of us who love SHAFT—the most famous Blaxploitation title, on top of everything—as idiots. I believe that fact alone played a key role in why “That’s Blaxploitation!” flopped in the marketplace, and why there’s been no definitive Blaxploitation book since then.

Going negative is the easiest thing in the world, and the fastest way to get people to praise you. Fuck “rants.” That shit is so hacky. I know this because I spent the initial decade-and-a-half of my career doing it. I love Heavy Metal Movies, and I wanted to write a book for people who either share that love or to whom I could happily explain my love.

That stated, not everything is about singing hosannas. Turn to the write-up of LORDS OF SALEM for an example of a, let us say, non-hosanna.

As for DEATH METAL ZOMBIES: you’ve just go to admire that pluck!

DG: How did Alice Cooper take to talking about the likes of SEXTETTE and MONSTER DOG?

MM: Talking to Alice was a dream come true and he loved discussing all the movies I brought up—each and every one. He affectionately goofed on MONSTER DOG and shared an uproarious behind-the-scenes story about Mae West on SEXTETTE. But you have to pick the book to know what it is!

DG: You really have it out for Troma, and I know you worked there briefly — what is it about the Troma aesthetic that bugs?

MM: I worked at Troma for two weeks in 1996, when I was frantically trying to change career paths. I walked out unannounced and they never paid me, which was an even trade. I couldn’t stay there. It really was a compromise of my principles, as ludicrous as that may seem.

My issue with Troma is what they became in the wake of THE TOXIC AVENGER. BLOODSUCKING FREAKS, I love to pieces; MOTHER’S DAY is also a sentimental favorite; and, even that first TOXIC AVENGER, when it came out and I was in high school, seemed like a riot at the time, and I went to see it repeatedly as a midnight movie at the Bleecker Street Cinema.

It’s the winking, shit-eating-grin, above-it-all, self-congratulatory, “we KNOW this is cinematic diarrhea and ain’t it ADORABLE that we know it?” attitude of Troma that enrages me. They don’t make or even distribute exploitation movies—they traffic in incompetent attempts at comedy that exploit exploitation movie elements, only they do it so charmlessly.

DG: Were there any titles that you watched or found out about after the book went to press that you would have liked to include? I know you’re working on a follow-up.

MM: At the very, very, very last minute, I looked down and realized I was wearing a t-shirt emblazoned with the cover image of the album The Director’s Cut by Fantomas and it hit me that I had forgotten to include the MOVIE FANTOMAS! Alas, the printer’s ship had sailed.

A handful of documentaries in production bubbled up that I wish I could have included, but they just weren’t finished yet. SOARING HIGHS AND BRUTAL LOWS chronicles the role of women in the metal. BLACKHEARTS is about three, let us say, diverse black metal devotees: an Iranian black metal musician, a Colombian Satanist, and a Greek neo-Nazi. The dynamic documentary duo of Sam Dunn and Scot McFadyen, who made a bunch of my favorite films in the book, are finishing production on SATAN, an exploration of the history of the devil.

DG: If you had to pick one movie from your book that not enough people have seen and promote it as a great example as to a Heavy Metal Movie, what would it be and why?

MM: THE GATE, from 1987, is a film that Daily Grindhouse followers are quite likely familiar with and it was a hit when it was first released, but it’s really fallen through the cracks and almost always gets overlooked, even when somebody brings up ’80s heavy metal horror movies. 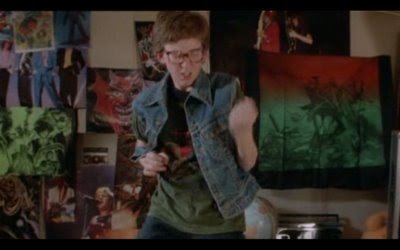 The object of the title is a passageway to Hell located in a suburban backyard that gets blown open when a couple of goofy adolescents play an evil metal record backwards. Among other demonic entities, an army of foot-high homunculi storm through, and the special effects—a combination of puppets, stop motion animation, and forced perspective—are an absolute marvel. THE GATE is also a sharp, exciting PG13 movie that strikes a perfect balance for introducing kids to both fright films and heavy metal—it’s funny and it’s just scary enough. 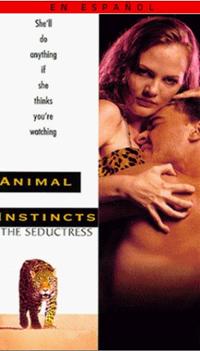 MM: Greg was a nut. He was a dear friend, a terrific talent, a great guy to work with, and, very much, a nut. At the time we started ANIMAL INSTINCTS III, Greg was heavily into hip-hop music and had expanded his intense martial arts regimen to include knife fighting. So his ONLY instructions to me were: “Make sure the movie has hip hop music and knife fighting.”

And thus the plot centered on a record producer who was an expert knife thrower. The fact that he was supposed to be blind, too, plays into the challenge of showcasing new variations on the oldest form of human interaction. When his wife fucks people in front of him while thinking he can’t see, it adds a deeper component to her exhibitionism and his voyeurism—in theory, at least. The finished movie is an apocalypse.

One of the movies I wrote for Greg, DEVIL IN MISS JONES 5: THE INFERNO, is great. The rest meander from one near miss, SEX FREAKS, to a couple of negligible efforts. ANIMAL INSTINCTS III stands alone as gloriously horrendous.

Thanks to Mike “McBeardo” McPadden for the interview!  Buy his book.