Home  ⁄  The Wire  ⁄  IT’S THE DAILY GRINDHOUSE 2018 HORROR ADVENT CALENDAR! ‘GOOD TIDINGS’ IS OUR THIRD FILM OF THE MONTH!

Who doesn’t love an advent calendar? Around the Daily Grindhouse virtual offices, we decided the only way to make the advent calendar better is to replace what you might traditionally find behind the door with Christmas horror movies! So everyday from December 1st through to Christmas, we will be highlighting a different movie for our horror-loving readers to celebrate the season. Our film for Day Three is GOOD TIDINGS! 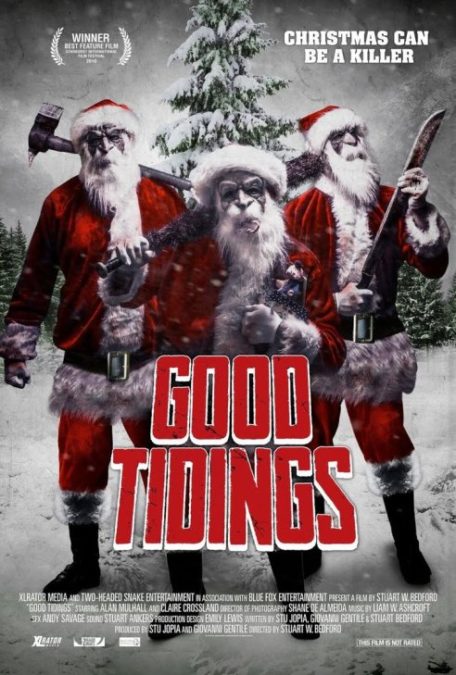 Instead of writing about Christmas horror movies I know and love, I decided to use the Horror Advent Calendar as a chance to check out some films I’d never seen before. That experience turned out reasonably well yesterday with THE CHILDREN, but it blew up in my face today with 2016’s GOOD TIDINGS. As Billy Bob Thornton’s titular character says in BAD SANTA when Thurman finds a piece of candy corn behind the latest door in his advent calendar, “They can’t all be winners, can they?” No. No, they can’t.

On Christmas day in an economically depressed town in England, three psychopaths kill a man and find Santa Claus outfits in the trunk of his car. They put the suits on and attack a group of homeless people squatting in an abandoned courthouse. That’s it. That’s the movie. So why is it one hundred excruciatingly long minutes when it should be seventy at most?

The script by director Stuart Bedford, Giovanni Gentile, and Stu Jopia tries to graft a down-and-dirty exploitation scenario on to a British miserablism drama and the results are as clumsy, confusing, and painfully dull as you would expect. When GOOD TIDINGS focuses on the slasher horror aspects, it has a certain grimy appeal as heads are lopped off and guts are pulled from bodies.

But when the film slows down to focus on the tragic back-stories of the various homeless residents, everything comes to a crashing halt. Normally, I would applaud a low-budget, trashy exploitation flick for trying to inject some character building into the proceedings, but the script of GOOD TIDINGS is too weak, the acting too shaky, and the premise too thin to pull off long monologues about drug addiction and kidnapped children when people were being killed with machetes and pipes just one scene earlier.

There really is nothing else to say about GOOD TIDINGS because I do not see a point to piling on the criticisms. Bedford and company tried to do something a little different and I applaud them for that. But simply trying to be different is not the same as trying to do something good. For ambitious as it seems like the filmmakers want to be, the results are surprisingly shabby, tedious, and just plain ugly.