Home  ⁄  The Wire  ⁄  IT’S THE DAILY GRINDHOUSE 2018 HORROR ADVENT CALENDAR! ‘ALL THE CREATURES WERE STIRRING’ IS OUR FOURTH FILM OF THE MONTH!

Who doesn’t love an advent calendar? Around the Daily Grindhouse virtual offices, we decided the only way to make the advent calendar better is to replace what you might traditionally find behind the door with Christmas horror movies! So everyday from December 1st through to Christmas, we will be highlighting a different movie for our horror-loving readers to celebrate the season. Our film for Day Four is ALL THE CREATURES WERE STIRRING! 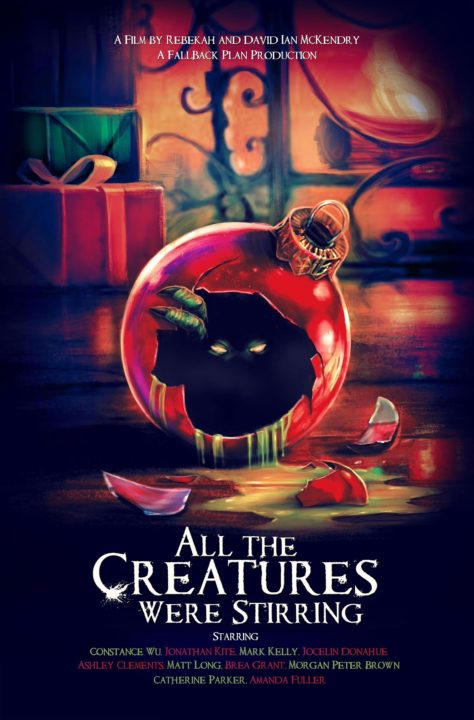 Continuing on with my efforts to watch only films I have never seen before for this Horror Advent Calendar project, today’s entry is a marked improvement over yesterday’s film.

There is a surprisingly warm, loving approach to the actual Christmas spirit in ALL THE CREATURES WERE STIRRING. Don’t get me wrong, this is still a horror anthology so there are the expected violent deaths, supernatural entities, and just plain nutty plot twists, but unlike many Christmas horror films, this one actually pays off the holiday part of the equation just as much as it does the horror side. 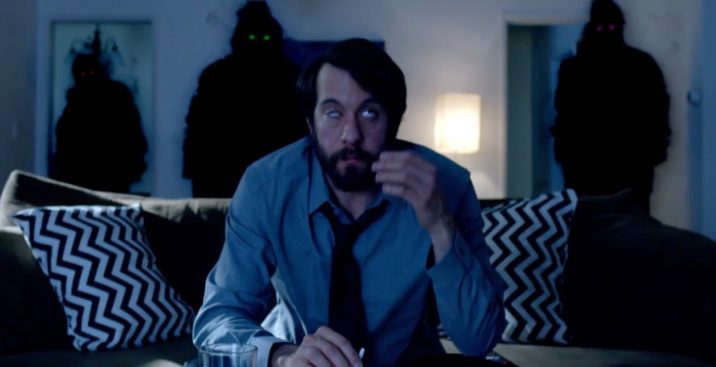 The set up is a traditional horror anthology premise with a wrap-around story that serves as the jumping off point for the individual stories that make up the bulk of the film. It feels like the wrap-around segment here is subtly spoofing this well-worn trope by having an awkward first date between two acquaintances (Graham Skipper, Ashley Clements) on Christmas Eve take place at a tiny storefront theatre where a small acting troupe puts on pretentious, badly staged skits. It is a nice change-of-pace from the traditional use of a creepy host reading tales from a book and provides some fun comedy, especially at the beginning as Skipper and Clements struggle to not bust out laughing at the goofy performances.

The individual segments are the usual mixed bag when it comes to a horror anthology film. The best are a Christmas office party gone wrong in unexpected, grisly ways and a fun, weird, and sweet-natured story of a woman (Constance Wu) who really wants to spend Christmas with her boyfriend (Morgan Peter Brown) but he has a very good reason for wanting to be alone. There is a solid segment about a man (Matt Long) who locks his keys in his car while Christmas shopping and gets more than he bargained for when he asks a couple of strangers to borrow their phone, but it feels more like just a clever idea than a complete story. A riff on the Scrooge story and a bit about a man who runs over a deer are the weakest, even with some visual flourishes in each to goose the viewer, they feel like they easily could have been excised. 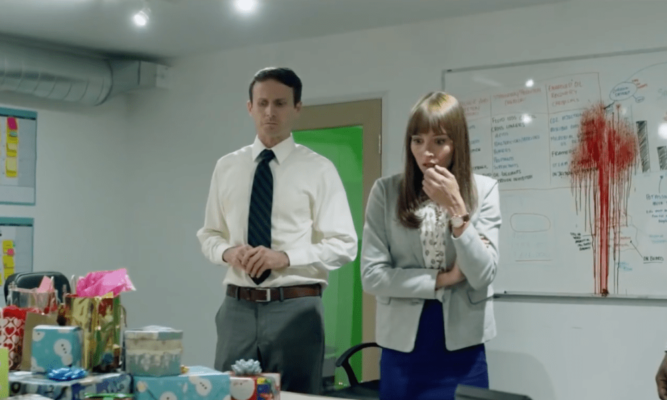 What is really admirable about ALL THE CREATURES WERE STIRRING is that co-writers/directors Rebekah McKendry and David Ian McKendry have actually made a Christmas anthology where the holiday is integral to all the segments. Too many Christmas horror movies feel like straight horror flicks that just happen to be set during the holiday season, but this is a true Christmas movie, albeit one with slit throats, gunshots to the head, and rats eating a man alive—this is a movie I’m writing about for DAILY GRINDHOUSE after all.

There is plenty of room for improvement here. If one or both of the weakest segments had been cut and the wrap-around story given a more satisfying conclusion, ALL THE CREATURES WERE STIRRING would be a hell of a flick. But even with its flaws, it is still a fun, gory, oddly heartwarming little movie.

ALL THE CREATURES WERE STIRRING hits DVD today.