Home  ⁄  The Wire  ⁄  HOUSE BY THE CEMETERY: Gothic Horror from the Maestro of Gore 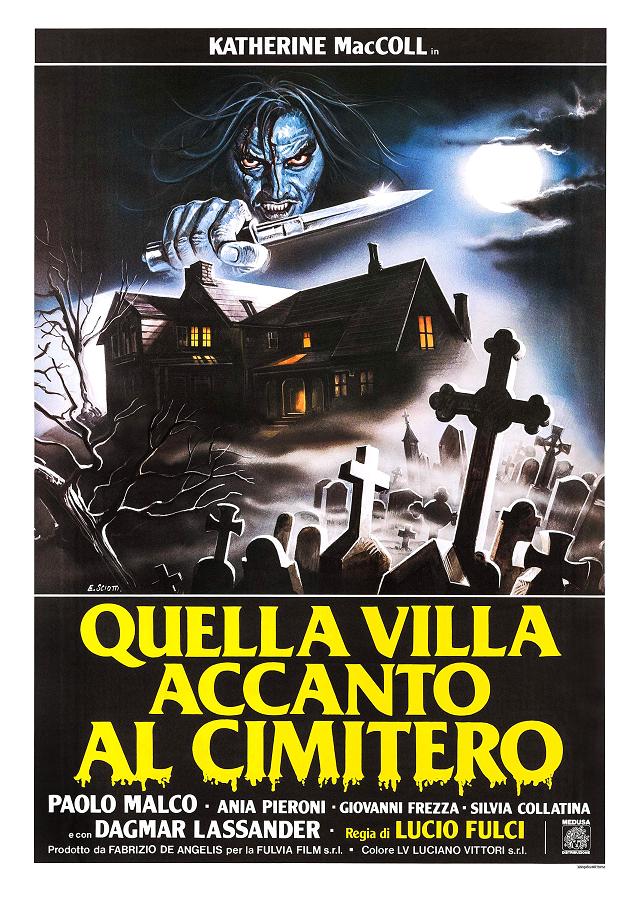 On the surface, Lucio Fulci’s HOUSE BY THE CEMETERY bears quite a bit of resemblance to Stanley Kubrick’s THE SHINING, and no doubt this was intentional. This is Italian exploitation from the guy who made a zombie movie and tried to play it off as a sequel to George Romero’s DAWN OF THE DEAD. THE SHINING was released in 1980 and HOUSE BY THE CEMETERY was released in 1981, so the connection is rather undeniable. There’s a psychic boy, a spooky ghost girl, a haunted house in the middle of nowhere, and some vague hints that the father in the story has “always been there.”

But just qw nobody would ever get ZOMBI 2 confused with a George Romero film, the connections to THE SHINING are all subsumed underneath the kind of violent Fulci insanity that make a film wholly his own.

Anyway, it’s a bit like Italian exploitation films in general, especially in the 1970s and 1980s. They don’t really imitate the American genres they’re trying to cash in on. They take the elements that they figure people come to these movies for (one of which is almost always the violence) and discard anything that gets in the way. Sometimes those things include realistic dialogue, a coherent plot, and decent acting that in any way resembles a real human. Thus, ‘spaghetti’ Westerns have a shitload of insane gun violence, and horror films up the gore. So they’re definitely an improvement on the originals.

Ah, but yes, there is a plot of sorts.

We begin with a teenage boy and a girl in the aforementioned haunted house. I guess they’re supposed to be teenagers, because the girl complains that if they don’t get out of there soon, she might get put on “restriction.” But her boyfriend gets his scalp pulled off and she gets a knife through her skull, so the whole restriction thing is a bit of a moot point.

We then cut to New York City, where a Dr. Norman Boyle (Paolo Malco) is about to leave for a town in rural Massachusetts to do some vague research begun by his former colleague Dr. Peterson. Peterson is quite dead now, after having killed his mistress and then himself. Peterson went insane after doing some research on a Dr. Freudstein, a mad scientist during the Civil War who enjoyed experimenting on humans in a variety of nasty ways.

And so Norman packs up his neurotic wife, Lucy (Catriona MacColl), and his eight-year-old son Bob (Giovanni Frezza), who’s recently been having visions of a little ghost girl, and the happy family head north for adventure and terror.

Speaking of Bob, the English dub is not very kind to the young lad. Frezza is apparently overdubbed by an adult who’s trying their best to imitate the speech of a young boy. Whoever’s actually behind the voice, they do not succeed. In fact, they failed miserably. The voice is off-putting in so many ways that it’s almost beyond description.

HOUSE BY THE CEMETERY has a gothic vibe that kind of takes you by surprise if you’re familiar with some of the rest of Fulci’s horror filmography. But don’t worry, there’s still plenty of gore. But the gore scenes are spaced out enough that there’s enough room to explore the spookier elements. After all, we are talking about a haunted house. In a strange mixing of gothic and gore, there’s a scene where a bat flies out of a spooky basement, only to get stabbed repeatedly after attacking Norman. And I mean repeatedly. The scene seems to go on forever and you start asking yourself, “Is it possible for a bat to actually contain that much blood? I mean, that really seems like more blood than its little body could possibly carry.” You know, as these things go. And if gothic horror isn’t really your thing, the last ten minutes are pure old-fashioned senseless gratuitous violence, and it’s goddamn wonderful. Something for the whole family.

Paolo Malco is especially effective as Norman, and not just in the scene where he’s being attacked by the bat. Norman is a condescending chauvinist, and Malco makes every second of the guy’s self-important dickishness believable. I joke, but it is a rather complex character to get right, and Malco does a great job.

Catriona MacColl’s performance as Norman’s wife Lucy is waaaay over the top, but her part was written that way, so it’s all good. She’s the stereotypical overly-emotional woman who’s always freaking out about something, but her good ol’ woman’s intuition usually turns out to be correct. Classic melodrama stuff. Extremely sexist. The writing is just really bad. It’s only Fulci’s weirdness that saves the movie.

I don’t know what his thing with eyeballs is, but there’s a lot of extreme closeups on various characters’ eyes, and their placement within the film didn’t always seem to make a lot of sense. At least nothing comes through the eyes this time. I don’t have the urge to look away much when I watch a horror movie, but that scene in ZOMBI 2 where the lady gets an enormous wood splinter stuck in her eye always makes me cringe. I don’t know, for some people it’s clowns, or old porcelain dolls, or old porcelain clown dolls. For me, it’s eyes. Anyway, these constant eyeball extreme close-ups aside, THE HOUSE BY THE CEMETERY is really a masterclass in shot composition. The plot might be all sorts of wonky, but the film is never uninteresting to look at.

Walter Rizzati, who also scored the excellent Italian MAD MAX ripoff 1990: THE BRONX WARRIORS, really sets the mood. The mix of orchestral and synth elements very much mimics the tone of the film – a throwback that’s firmly rooted in what was then the present. Just like the movie mixes gothic horror with a slasher and gore. Very good stuff.

The special features include two people who have written extensively about Fulci, so you can walk away from this Blu-ray set with as much or as little information about the guy and his films as you’d like. The commentary is by Troy Howarth, who wrote SPLINTERED VISIONS: LUCI FULCI AND HIS FILMS, and there’s a neat little featurette with Stephen Thrower, author of BEYOND TERROR: THE FILMS OF LUCIO FULCI. Together, not a stone is left unturned. If there’s something left to tell about the flick after this, I’m pretty sure it ain’t very important.

This Blue Underground special edition is also packed with a ton of featurettes with actors and screenwriters involved in the movie. The screenwriting stuff was pretty interesting since there were four screenwriters, including Fulci. The movie started out as one person’s vision, and the story became more and more garbled with each successive writer. There’s a lesson in there somewhere, I suppose.

In all, you get three discs, including the score on CD. Not bad at all.

THE HOUSE BY THE CEMETERY is a flick that’s definitely not going to be for everyone, even for all horror fans. But if you’re one of those weirdos who can get into the Fulci vibe, this thing is a hell of a wild ride. This Blue Underground special edition is highly recommended.