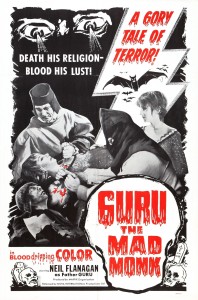 When people ask me where I grabbed my online nom de plume from, I usually give ’em an honest answer — I pulled it right out of my ass. It sounded good, it fit with the kind of movies I (mostly) wanted to talk about, and there you have it. No moment of inspiration. No playing around with various ideas and mixing and matching until I came up with the best choice. None of that shit. I thought of it a few seconds before I wrote my first-ever review five or six years back now, and stuck with it. I found out later that there was a guy who called himself the Film Guru who ran a website that he’d shuttered years earlier, and if I’d known about him I probably would have picked a different blogging handle to avoid sounding similar to anybody else. By the time I was made aware of his (former) presence, though, it was too late — I was already up and running, so the name stayed.

All of which is to say that those (admittedly few) who have asked me if it’s some sort of tribute to Staten Island no-budget auteur Andy Milligan’s 1970 effort GURU, THE MAD MONK are barking up the wrong tree. I like Milligan’s films, to be sure (this one included), but I felt no need to pay any kind of homage to the guy simply because — shit, I’ve read Jimmy McDonough’s superb bio THE GHASTLY ONE, and much as I have a strange kind of respect for Milligan as a filmmaker, I have no respect at all for him as human being. If you’ve read the book yourself, you probably know why — if you haven’t, suffice to say that there’s very little he did in life that’s worthy of any sort of emulation. Andy was a seriously messed-up character who had a lot of issues and needed a lot of help. 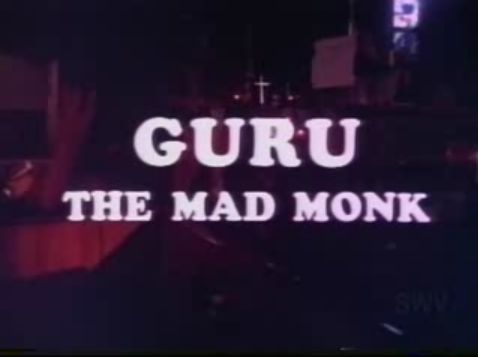 But that’s what makes his cinematic work so singularly fucking compelling, isn’t it? Beyond the held-together-with-spit-and-polish production values that are beneath even community theater standards, there’s a vibe to all of Milligan’s work that just can’t be faked or mimicked. There’s no mistaking a bad film made by Andy Milligan for a bad film made by anyone else. From the tone-deaf dialogue to the barely-sublimated misanthropy to the boiling cauldron of sexual neuroses to the far-less-than-authentic period settings, his movies well and truly inhabit a universe of their own. Thank goodness.

Getting back to GURU, I don’t think there’s anyone out there who would seriously argue that it’s anything like a standout effort, even in comparison to other Milligan flicks (although there a number others that are worse, to be sure), but as a microcosmic representation of everything that made the moral, sexual, emotional, and physical reprobate’s work so positively unique, it measures up fairly well. In fact, if I were tasked with the unenviable job of exposing an unsuspecting friend to Andy’s work for the first time, this might be the film I’d choose. Not because it deserves to be seen more than the others, but simply because it’s a reasonably digestible distillation of his toxic psychological stew. 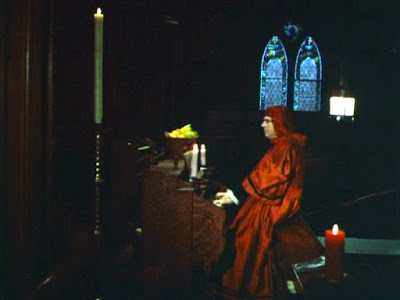 Consider: on the fictitious island penal colony of Mortavia in the year 1480, God’s punishment of the wicked is overseen by our titular sadistic monk (played with gleeful relish by Milligan stalwart Neil Flanagan), a guy who clearly loves his job a little too much, and he gets plenty of help in meting out twisted justice from his cast of sidekicks that includes the most — well, Igor-ish Igor you’re ever going to come across (played by Jack Spencer, who’s hamming it up to the nines), the maliciously deviant lesbian vampire Lady Olga (Jaqueline Webb) and kind-hearted jailer Carl (Paul Lieber), who takes a particular liking to one of his charges, the distraught Nadja (Judith Israel), even though the actor portraying him quite obviously has no romantic or sexual interest in women whatsoever. Nevertheless, our fair maiden, who’s being held captive for the crime of infanticide (as in, getting an abortion) stirs something deep in Carl’s heart, if not his loins, and his attempt to save her from his depraved employer’s clutches triggers off a series of events that ultimately culminates in a characteristically-poorly-realized bloodbath of a conclusion that’s loaded with a generous amount of the least-convincing gore effects you’re ever likely to see.

There’s no doubt about it, friends, every aspect of Milligan’s sexual psychopathology is on display here, from cruel sadism to casual violence to stereotypically effeminate meekness to a depraved and misogynistic view of women as blood-draining mistresses of the dark to gender role confusion to self-loathing rooted in one’s same-sex attraction — he may spread it out over numerous characters and situations, but it was all a part of what made Andy who he was, and the film is essentially an autobiographical piece dressed in lame period-drama trappings (look for the medieval peasant in corduroy pants, for instance). The themes explored here are far from universal in society, but they’re positively ubiquitous elements of Milligan’s cinematic oeuvre. He was his films and his films were him; the two are well and truly inseparable. 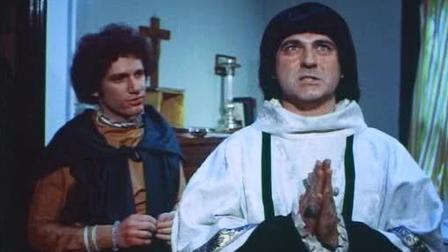 Plenty of right-thinking people understandably feel a pretty harsh recoil effect when exposed this directly to the inner workings of a mind this troubled and troublesome, especially when its effect is compounded by an incessantly droning library-track musical score and haphazardly pieced together on cheap 16mm short ends before being left to simmer in, and eventually boil over with, a truly misanthropic “all of you are hopelessly fucked and so am I, but at least I don’t care” attitude, but if you can stomach what our short-order cook from hell is serving, you’ll find the dish to be — not exactly appetizing, but at least palatable, especially given the fact that he usually served it up in small (if packed-to-the-rafters) doses. GURU, for instance, clocks in at just under 56 minutes — and honestly, that’s plenty for one sitting.

Don’t be surprised if you eventually come back for more, though. Having endured one trip into and through the Milligan mindscape, one is often strangely compelled to make numerous return visits. After all, you survived it once, who says you can’t do it again? Which probably isn’t so terribly different from the feeling one gets reading my reviews. So maybe this Guru guy is a distant ancestor of mine after all. Here’s the film in its entirety courtesy of a YouTube poster who goes by the delightful handle of “lordhighexecutioner” (it’s also available as a bare-bones, full-frame, mono-sound DVD release from RetroMedia, but why not check it out for free first?), so give it a look and let me know if you see any family resemblance: