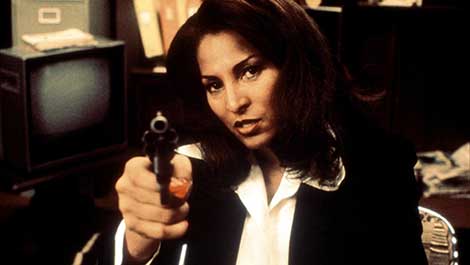 If You Like Quentin Tarantino…
By Katherine Rife
Limelight Editions
192 Pages
$16.99

No matter what your feelings on Quentin Tarantino are, there’s no question that he’s the most powerful exploitation film fanboy on the planet. The recent announcement of a theatrical re-release of Sergio Corbucci’s seminal 1966 spaghetti western DJANGO, tied to time in to the late December unleashing of Tarantino’s DJANGO UNCHAINED, is proof of this – there’s no way that the film would have gotten major promotion had interest in it not been spurred by the fact that Tarantino clearly used it for inspiration. (Of course, it is possible that it’s a belated release spurred by the “Banjo” episode of “Bob’s Burgers” that aired last year, but evidence that Loren Bochard has the same influence on pop culture that Tarantino does is, at best, limited.)

It’s no wonder, then, that Tarantino has become a valuable “gateway drug” into the sordid world of a love of exploitation film history, as even his harshest critics have to agree that the guy is exposing huge audiences to film styles they may not otherwise have been aware. Your Uncle Bob probably has no idea who the hell Jack Hill is, but damn, he loves watching JACKIE BROWN. 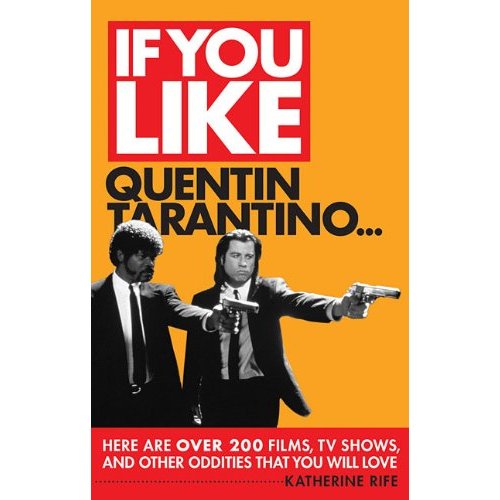 CLICK THE COVER ART TO ORDER THIS GOOD SHIT FROM AMAZON

This makes “If You Like Quentin Tarantino…,” the latest book in Limelight’s series of “If You Like” tomes dedicated to using a particular artist as a launching point for suggestions of similar works in tone. The other books in the series include the likes of Monty Python and Metallica, and Tarantino certainly is a worthy figure to use as a base for gauging a person’s interest, as I can’t think of a single filmmaker who has manipulated such a varied number of psychotronic genres and styles into films that become such cultural phenomena. (The likes of Robert Rodriguez, Brian DePalma or Rob Zombie certainly wear their influences on their sleeves, but audiences for new films from all three are significantly more limited.)

Writer Katherine Rife, a familiar name to genre readers from her work with Mr. Skin and as a founding member of found footage maestros Everything Is Terrible!, delves into Tarantino’s influences and contemporaries head-first, opening by pinner her obvious love for his films to seeing PULP FICTION in junior high school. As FICTION became a springboard for her enthusiasm for the wild world of psychotronic films, she uses all of his completed features as entry points for audience members eager to dig deeper than just wanting to figure out the contents of Marcellus Wallace’s briefcase.

The book follows the timeline of Tarantino’s career, opening with RESERVOIR DOGS serving as a method to discuss the likes of THE KILLING, THE TAKING OF PELHAM 123 and the ubiquitously-compared CITY ON FIRE up through DJANGO UNCHAINED, which goes through both the obligatory big-name spaghetti westerns (The Man With No Name Trilogy) to more obscure entries such as DAY OF ANGER, THE GREAT SILENCE and raceploitation flicks like GOODBYE, UNCLE TOM. In between, Rife explores the influences of Shaw Brothers on KILL BILL, Jack Hill and Elmore Leonard on JACKIE BROWN, and titles as varied as POINT BLANK and BREATHLESS on PULP FICTION.

Rife’s natural exuberance for all of the films and genres comes through clearly, and which each film written up is given only a page or two, there’s plenty of information on display, serving as a mildly trimmed version of Joe Bob Briggs’ “Profoundly Erotic” and “Profoundly Disturbing.” While Rife clearly loves all of the films written about in full, she’s not blind to their problems, citing how DIRTY MARY, CRAZY LARRY “wildly shifts between a heist flick, a road movie, and eventually a balls-out action extravaganza” and cops to WAR OF THE GARGANTUANS as being “grown men in silly costumes stomping on tiny towns made of plywood,” and is perfectly willing to be dismissing when called for, such as the brief assessment of FOUR ROOMS and the TEXAS CHAINSAW MASSACRE sequels made after 1986.

Despite the fact that the descriptions are relatively short, Rife does an astounding job of researching the films, delving into the history of the LONE WOLF AND CUB films, the confusing storyline of Pei Mei and the career of Zoe Bell in the write-up on the (excellent) documentary DOUBLE DARE. The missteps are virtually nil, and completely understandable – in the description of BLACK SUNDAY, for example, Barbara Steele is listed as a “future ‘Hammer House of Horror’ queen” though the closest Steele got to Hammer was in Tigon’s CURSE OF THE CRIMSON ALTAR.

In addition to film recommendations, Rife points out music that no self-respecting cult film fan should be without (Goblin, The Wu-Tang Clan), has brief (but welcome) sidelines regarding the history of rape/revenge films and Robert Rodriguez, and a pair of appendices chronicling Tarantino’s short-lived Rolling Thunder distribution line and a listing of titles shown at the 2006 festival serving as a “best-of” for the annual film marathon he throws at the Alamo Drafthouse. In short, there’s plenty here that should serve as inspiration for a good evening’s viewing.

As the book is geared towards those whose knowledge of cult films is a bit more limited, and it’s an ideal stocking stuffer for your younger cousin whom you just KNOW would be totally into SWITCHBLADE SISTERS if she knew about it, don’t be put off as a genre die hard either. There’s certainly a fair share of titles here I’d been aware of only tangentially (Oh, THAT’S what the HANZO THE RAZOR series is about? I do need to check those out.) that served as welcome reminders that there are still plenty of fascinating crevices of exploitation film left to explore. Even if you think that you know so much that you absent-mindedly name-check the references in a new Tarantino film so easily as to annoy everyone you know, “If You Like Quentin Tarantino…” makes for a great gift for the friend or relative you’ve been dying to infect with grindhouse goodness.