I tend to find most generalizations to be inaccurate and ultimately harmful. Many sweeping statements force unnecessary binaries while excluding nuances inherent to a complicated world. However, I truly believe there are two truths for most people in this world at this moment in history: most people are tired, and most people are angry. That doesn’t mean everyone has the right to be either or both of those things. It doesn’t mean that everyone’s exhaustion and fury is equal. Most people aren’t even pissed off about the same things — it may be over a shared topic, but it’s still from diametrically opposing viewpoints.

Nonetheless there is an almost universality to this fatigue and rage that is beginning a new phase of severity. Moments like this are when there is a rise of grassroots progressive movements AND fascist strongmen, two reflections of the same impulse to radically alter course for the betterment of some group (or groups).

Again, this isn’t meant as a false equivalency; the white rich cishet dude tired of hearing about inequality and angry at having his privilege pointed out is not the same as an impoverished trans youth who is turned away from family and shelters amidst laws making their existence a crime. This unifying hostility and enervation is not justified for everyone, but is the common thread that seems to be woven through society at the moment. Everything is broken to everyone, and they are all sick of no one doing anything to fix any of it. 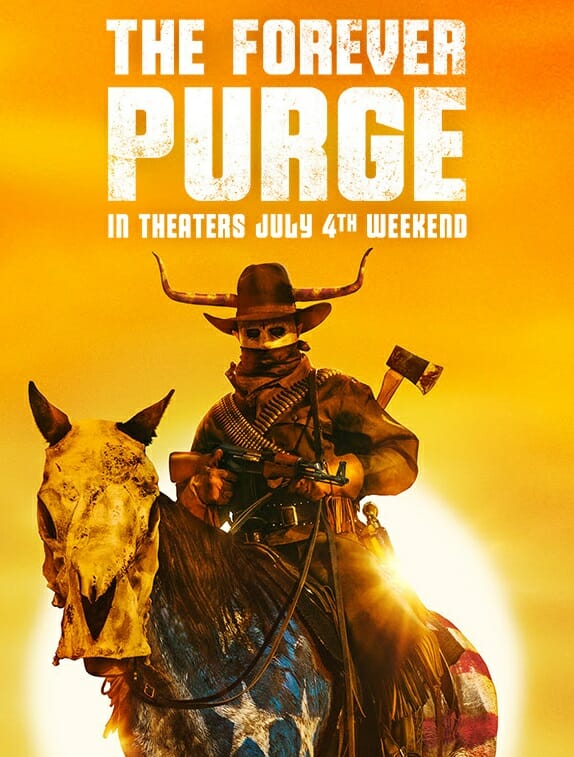 THE FOREVER PURGE literally uses writing on the wall as deliverance for the characters while the writing on the wall the filmmakers saw in real life became an Insurrection. The PURGE films are curious works because of how they tend to make the mind wander into other possibilities. Created by James DeMonaco, each entry has told different stories all with obvious political points mixed in with ornate sequences of violence. But in all the movies and the TV series, there are always two types of questions that arise for viewers.

The latest installment, directed by Everardo Valerio Gout from a script by DeMonaco, addresses that last question by taking the nation’s temperature of its current climate and finding it rapidly approaching boiling point.

Adela (Ana de la Reguera) and Juan (Tenoch Huerta) flee Mexico using underground tunnels to illegally immigrate to the United States. Months later, Adela works at a meat packing company with her boss Darius (Sammi Rotibi) while Juan and his friend T.T. (Alejandro Edda) maintain the stables at a ranch owned by Mr. Tucker (Will Patton). Tucker’s son Dylan (Josh Lucas) has some sort of grudge against the Mexican laborers, one that his father, sister Harper (Leven Rambin), and pregnant wife Cassidy (Cassidy Freeman) all try to disarm and downplay. Meanwhile, Purge Night has been revived by the New Founding Fathers of America (NFFA) after they won back their power in the federal government. But there seems to be something different about this Purge from the others as the morning arrives and semi-organized groups continue and intensify their lawless, murderous ways to create a gauntlet that Adela and company must navigate to survive. 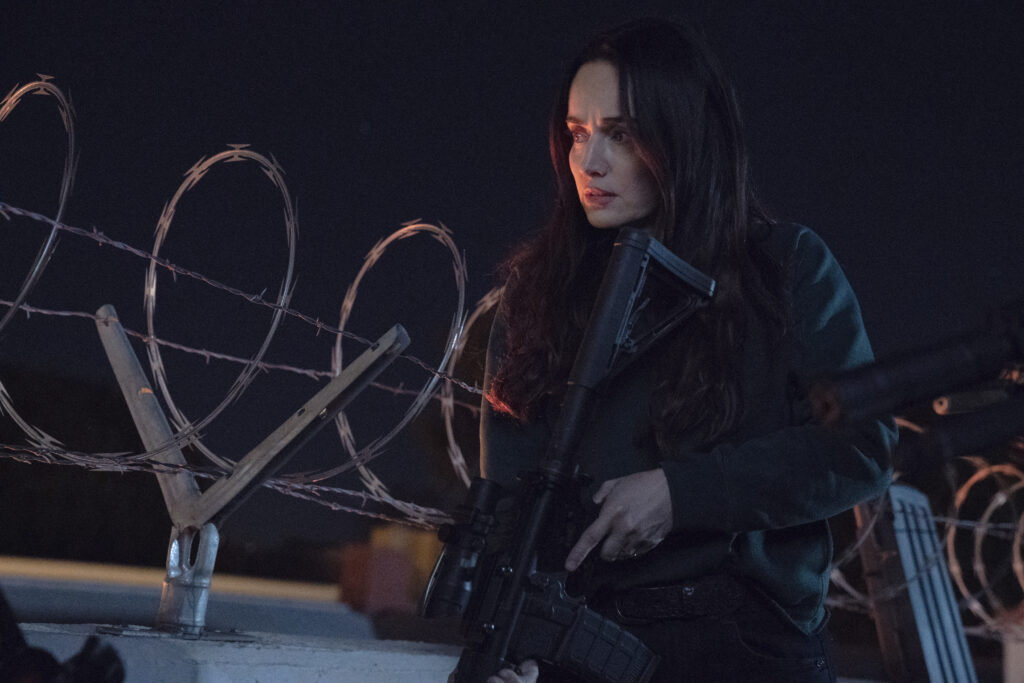 THE FOREVER PURGE isn’t the strongest in the series (that remains ANARCHY) but it’s not the weakest either (that’s still the first film). The common threads it shares with the previous four films (plus a mostly, and unfairly, overlooked TV show) is that it is overt about its politics, its philosophical obviousness approaches oversimplification, strong sequences of violence, and very uneven internally between sections of the movie.

It also continues the tradition of strong acting across the board; a fact that isn’t as recognized as it should be. From Ethan Hawke’s work in the original to de la Reguera in THE FOREVER PURGE, there are engaging performances rooted in character from talented actors. That’s not very common in fifth instalments of horror franchises. Many of the characters are thinly sketched or caricatures pulled from cable news as a stand-in for a type of people, but all the players try to find some way to inject humanity and believability into them. (This doesn’t apply to those who only show up in bunny masks or skull paint to scream a few things then die, of course; but the point stands.) 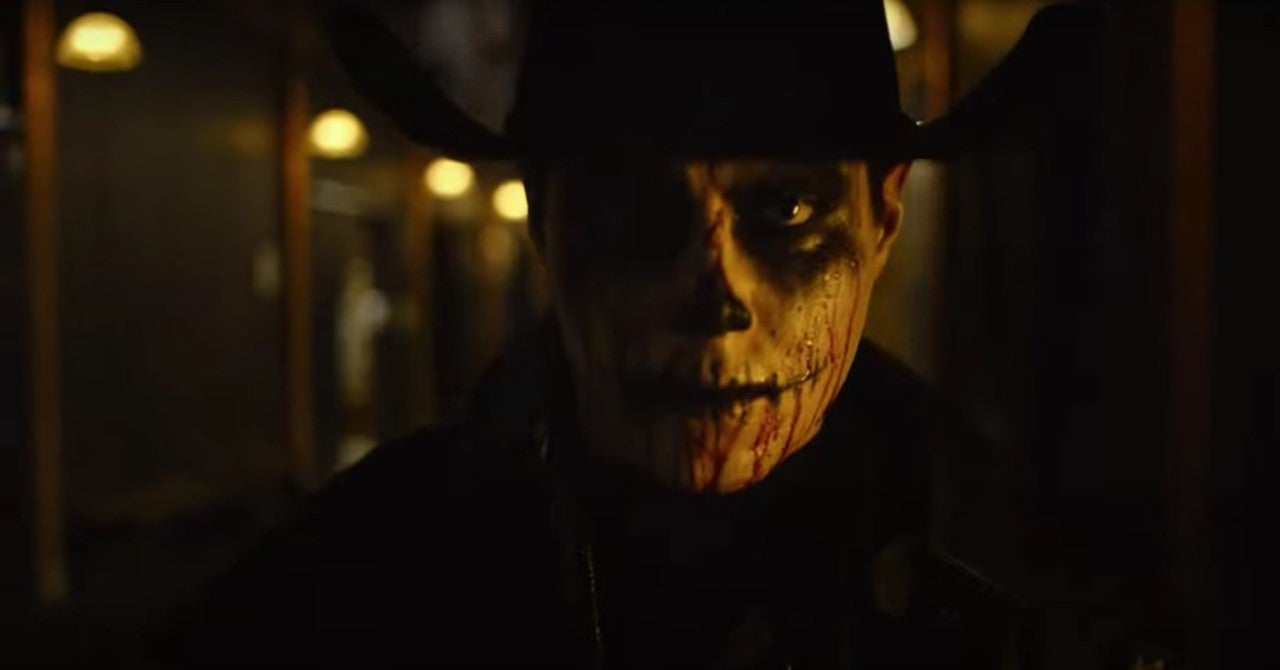 Any viewers that see “illegal” immigrants as awful people (or less than human) or wish to make this country “great again,” will most likely hate THE FOREVER PURGE from the outset. DeMonaco has worn his beliefs on his sleeves since the jump and yet every time there is a group shocked to discover that it’s “biased” against their ideologies. THE FIRST PURGE was literally advertised with an official poster that parodied a MAGA hat. This movie is not for those who have their own MAGA hat. 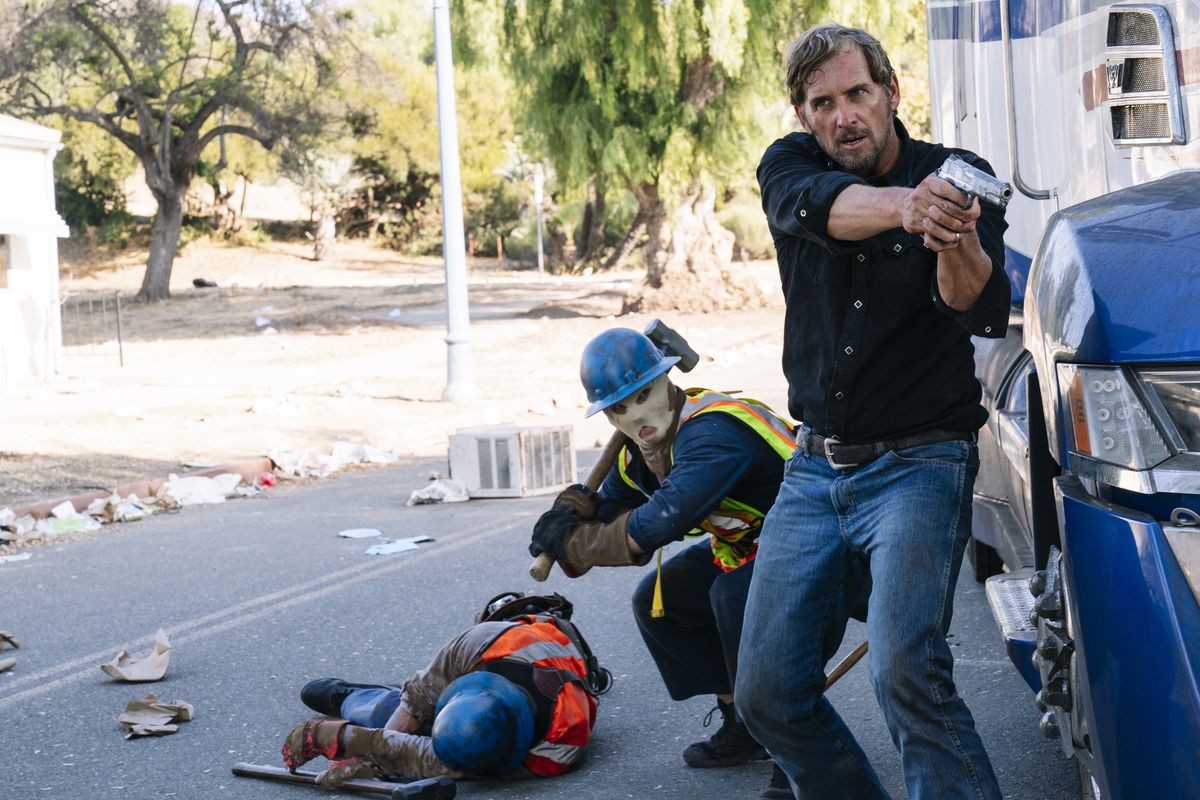 For others, THE FOREVER PURGE is complicated despite its reductive approach to politics. It’s crucial to remember production started in November 2019, wrapped February 2020, and the film was originally planned to come out July 2020. This is vital because many will believe it was made in response to, or concurrently with, the Insurrection on January 6th, 2021. Yet the villains are a group who band together to take back their country from others using violent means (including against politicians, police officers, and military personnel they otherwise proclaim to support). A small segment seems to be doing it out of “economic anxiety,” unwittingly being manipulated by rich folks to strike back at other rich folks. But the larger contingency consists of self-righteous, racist, entitled white people who have been propped up by partisan news to follow the NFFA’s rhetoric to its logical and bloody conclusion?including turning on the NFFA itself. Such prescient writing is both impressive and indicates the inevitability of the events at the Capitol earlier this year. THE FOREVER PURGE concerns manufactured and exploited outrage displayed in grandiose and apocalyptic ways. But it’s not in a manner that feels that far removed from reality. 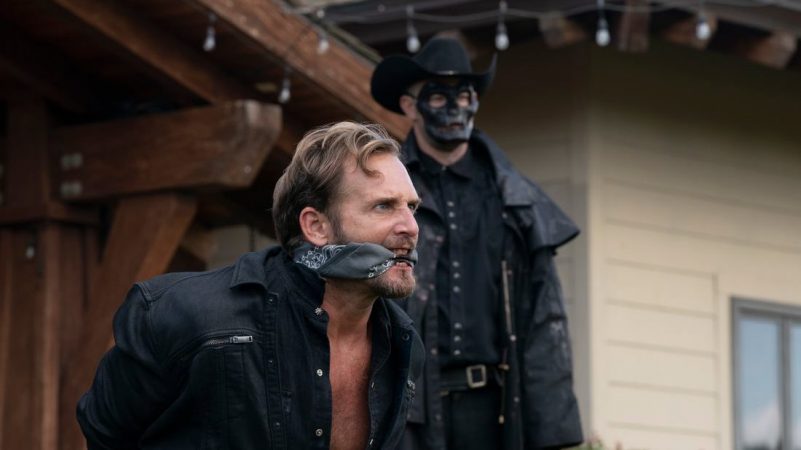 However, the movie also manages to reinforce stereotypes that it seeks to dispel. The Mexican immigrants are roped into the trope of saving privileged white folks (who, in turn, learn tolerance), which may be a metaphor for the dependency of non-white people voting blocs to save the country’s white population from itself. But achieving that requires all of the Mexican characters to be highly proficient in weaponry as they came from the war-torn version of Mexico. It’s also curious that THE FOREVER PURGE demonstrates how prolific gun access fuels the revolt to a gruesome degree… yet that same access arms the protagonists against these monsters. Good guys with guns stopping bad guys with guns.

Canada and Mexico eventually open their borders to asylum seekers from the U.S., an eye-rolling bit of irony that also raises all the practical questions. That becomes the driving force for the plot as the main group journeys to safety amidst fighting in the streets where new alliances are forged and various sacrifices made in confrontations with these marauding bands. These sequences are where the technical aspects of Gout’s film become erratic. Some are composed of clever shots using different types of cameras by DP Luis David Sansans that highlights a real sense of location alongside engaging action choreography. But there are other scenes where one-take long shots or immersive “found footage” style vantages using Go-Pros are executed sloppily revealing dismal physical coordination — there are members of the protagonists who are seen haphazardly and seemingly randomly shooting guns into walls and floors. Many of these more technically involved set-ups should require the most controlled blocking; instead they feel like improvisation the actors tried during rehearsal. 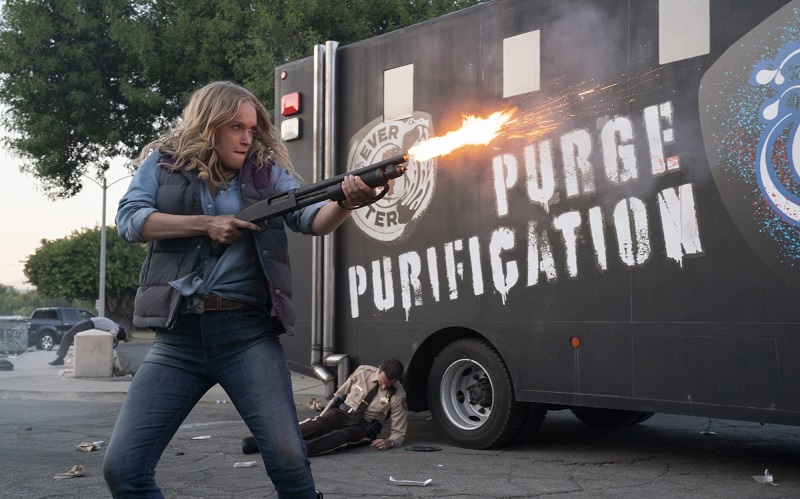 As with the other PURGE films, THE FOREVER PURGE ends up injecting a vendetta storyline where one of the Purgers has a personal score to settle with one of the heroes. It adds drama and focus to the sprawling narrative, but also distances the film even further from reality which allows the threats to become even more cartoonish in villainous roles. On the plus side, getting to know these assholes does make it even sweeter when they get an arrow to the face and watching Nazis get blowed up. 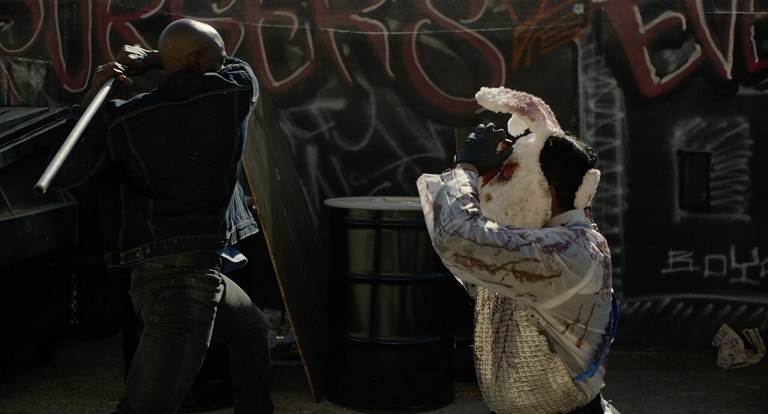 THE FOREVER PURGE isn’t subtle, but sometimes points shouldn’t be understated, and subtext can often be used by cowards. Its politics are the most prominent aspect with the filmmakers’ hearts in the right place. But the portrayal of these topics isn’t always handled well, mildly defeating its own purpose. There is a propulsive energy to the proceedings, sharing that manic devolution into hysteria during a set number of hours found in MIRACLE MILE and Spielberg’s WAR OF THE WORLDS. There are clever (and disturbing) set pieces along with well-executed action that is occasionally undercut by other rushed and incomplete sequences. The iconography used by the Forever Purgers’ masks, symbols, and more — handled by production designer Jennifer Spence, art directors Clint Wallace and Susan Alegria, and costume designer Leah Butler — create haunting visuals that will linger with viewers.

The filmmakers tried to focus on real issues and dangers rapidly metastasizing in U.S. society. That shared sense of anger and fatigue across the nation is palpable from all characters in THE FOREVER PURGE, though it remains apparent who is more deserving of those feelings. DeMonaco and Gout knew where everything was headed over the past four+ years. And now PURGE fans may worry about their next prognostication. How much will the current rage and exhaustion fuel the next dark chapter of this franchise and our lives? 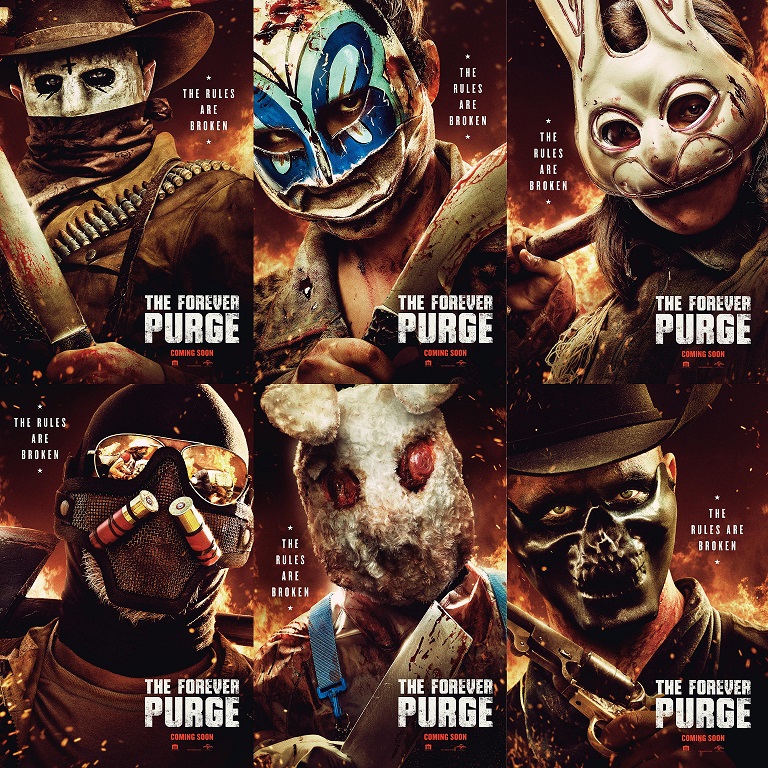