It’s probable that, when the FEAR STREET triptych wraps up next week on Netflix, there will be a better sense of the strengths and weaknesses of the works—both as individual installments and a collective whole. FEAR STREET PART ONE: 1994 was a fun throwback to ‘90s slashers with impressive style, engaging characters, and unexpected visceral violence. But it was also marred by its lack of clarity towards being an homage, a mockery, a reinvention, or what which made a lot of the visual and audio elements clash in clunky ways. FEAR STREET PART TWO: 1978 extends that experience. Though it’s much more obvious that this entry is meant to be a tribute melded to some form of subversion, there is still the jarring aspects of occasionally trying to replicate looks/styles/staples of the slasher of a specific era, then ditching that completely for whole stretches, plus far too many cultural signifiers. Quick aside: “(Don’t Fear) The Reaper” should be forever banned from horror movie soundtracks unless approved by some sort of oversight committee. There are a lot of fun moments, pitch perfect simulations, and inventive aspects that highlight co-writer/director’s Leigh Janiak’s passion and knowledge for these types of films and make FEAR STREET PART TWO: 1978 over all a fun summer slasher to watch. It’s just a shame so much of it keeps stumbling on the same problems repeatedly. 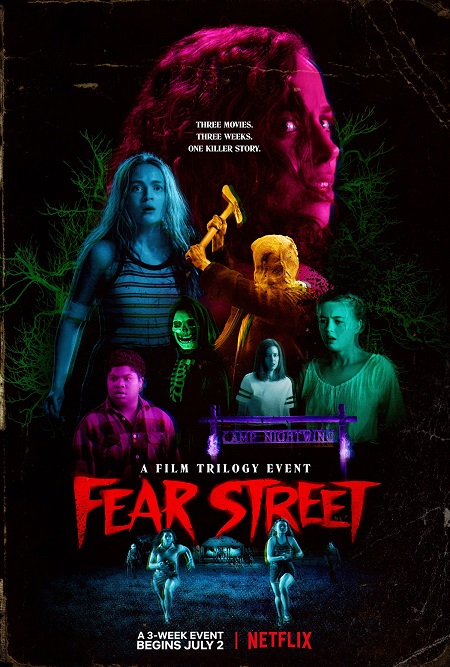 Picking up where PART ONE ended, C. Berman (Gillian Jacobs) lives in a very sheltered and structured manner — a room full of clocks, each with an alarm associated with a specific activity like eat dinner, check the locks, and feed her dog, Major Tom (hope you like that Bowie reference because there’s a lot more to come). Deena (Kiana Madeira) and her brother Josh (Benjamin Flores Jr.) show up at her house looking for help in freeing Deena’s girlfriend Sam (Olivia Scott Welch) from the clutches of an ancient witch.

Berman regales the duo with her own encounter with Sarah Fier’s curse, back at Camp Nightwing in 1978. Ziggy Berman (Sadie Sink) is the troublemaker from Shadyside, constantly getting into scraps with the hoity toity Sunnvale kids at summer camp. Nick Goode (Ted Sutherland) tries to look out for her, Sheila (Chiara Aurelia) and the other blue bloods torture and mock the spirited girl from the wrong side of the tracks.

Meanwhile, Ziggy’s sister Cindy (Emily Rudd) does all she can to stick to the straight and narrow and project a sense of perfection as she performs her duties as a camp counselor with her sweet boyfriend, Tommy Slater (McCabe Slye). Nightwing’s nurse Mary Lane (Jordana Spiro) attacks the couple, believing that Tommy will soon turn homicidal. The witch’s curse is not only real but compelling horrible acts of murder and it’s up to the Berman sisters to stop the bloodbath and survive the night. 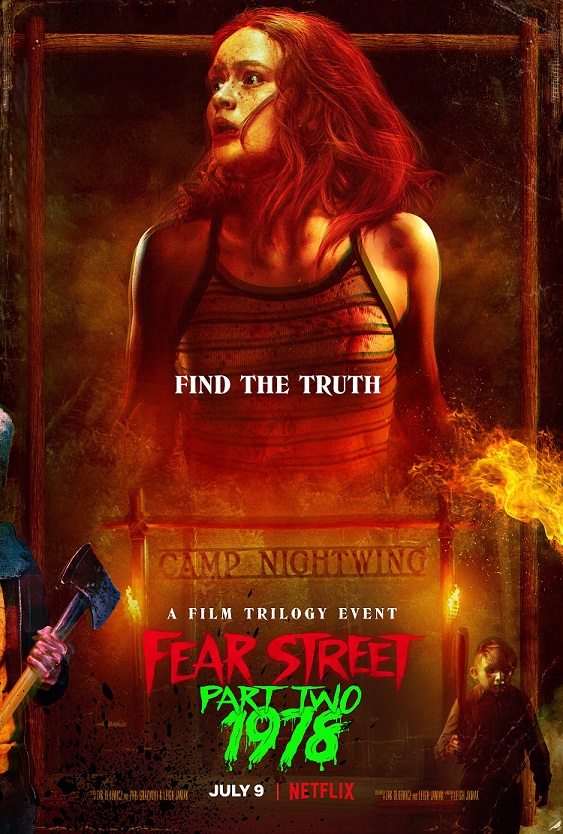 Some may see this as overkill, but it cannot be overstated enough how poorly handled the needle drops are in FEAR STREET so far. Thank god PART THREE mostly takes place in 1666 — though I fear a lot of renditions of “A Simple Gift” and “Bringing In The Sheaves” to crop up. This installment actually begins promising with Nirvana’s cover of “The Man Who Sold The World” as that’s era appropriate for 1994, echoes back to when it was a hit for Bowie in the ‘70s, and it plays for longer than 45 seconds. PART TWO lulls viewers into thinking that PART ONE’s incredibly distracting soundtrack use was meant as some sort of ‘90s signifier and a new page has been turned in the FEAR STREET book. Nope! While it’s not as egregious with the short bursts as PART ONE, where seemingly every character was introduced with 30 seconds of some pop song, PART TWO uses probably more super sounds of the ‘70s to establish the era and try to invoke some sort of narrative or tonal weight. It doesn’t work, it’s intrusive, and it’s weird that no one caught it. Again.

Outside of the heinous music cues, Janiak, co-writer Zak Olkewicz, DP Caleb Heymann, and production designer Scott Kuzio capture a lot of the style and vibe of those late ‘70s/early ‘80s campground slashers. There are nods, both subtle and glaring, to the first two FRIDAY THE 13TH films, SLEEPAWAY CAMP, THE BURNING, MADMAN, and a few others that will be fun for horror fiends to spot but don’t detract from the film being its own creature. The set and costumes are spot-on in a way that isn’t winking too hard, while Heymann utilizes lighting and angles predominant from that time period, and composers Marco Beltrami and Brandon Roberts do a fair imitation of Harry Manfredini’s FRIDAY THE 13TH scores (as opposed to regurgitating Beltrami’s SCREAM work like the last entry). There’s also a cop with an awful wig that is either a complete screw-up or, more likely and what I’m hoping for, a reference to that horrendous fake mustache the police officer has for like two scenes in SLEEPAWAY CAMP.

But like PART ONE, this verisimilitude is not consistent. The hair and makeup is far too modern; even if the punk stylings of counselor Alice (Ryan Simpkins) were realistic for the time period, for example, the way in which their makeup, hair, and costume is styled is incongruous with the visual vibe of those slashers from decades past. There are shots that are far more common among current horror films than could ever have been done in those years (including a weird CGI zoom through a tunnel), and that shatters whatever world that Janiak and company are looking to create.

What makes this so frustrating is that there’s a lot of good in FEAR STREET PART TWO: 1978 that keeps getting obfuscated by these lapses in stylistic consistency. The dialogue isn’t too great (still better than most slashers from that era), but the acting is excellent. Simpkins and Rudd start off as a typical trope (foils who once were friends) but sell the diverging paths their lives took and the common bonds that remain. Sink and Sutherland have compelling chemistry that is a mix of ‘70s cheese and sincerity that makes for viewers to be invested in them. The other characters are the appropriate amounts of being distinguishable without too memorable or humanizing, perfect for the dead teenager movie with a high body count.

Much like PART ONE, there are some surprising instances of brutality and gore; though here it’s handled better than the jarring couple of times it occurs in the first installment. There is some clear CG work on the slasher kills and use of having chopping off screen (which is fair as some of the victims are literal children). But by and large it’s well-executed, startling acts of violence that would be at home in a FRIDAY THE 13TH imitator that couldn’t get Tom Savini but with a bit more modern cruelty that sells the stakes. There is even some cool supernatural f/x (with a nod to HELLRAISER, no less) that was inventive and melded well with the otherwise ‘grounded’ type of horror.

The narrative is fairly straightforward, with the usual give-and-take between “it’s the curse” and “there’s no such things as curses!” that appear in these stories. Most of the arcs are predictable but still rewarding due to the solid performances and strong chemistry between the actors. There is a quasi-twist at the end (that everyone will guess pretty early on) that doesn’t really make sense over all, but the framing device of the 1994 storyline is maintained and will have audiences very curious how these narratives will come together and wrap up in the final installment.

FEAR STREET PART TWO: 1978 has very little to do with Stine’s actual books — mostly just the names of characters and locations, some plots from a few titles, and nods for fans — but it is a nice throwback to a certain sub-genre in a very specific window of time. Janiak gets excellent work from her cast and often shows her mastery of the films of that era. But the lack of maintaining a cohesive style breaks the “reality” of Camp Nightwing and pulls the punch that the film could have delivered. And the soundtrack, while full of fun bops, is ridiculously intrusive which further shatters immersion. It’s still a mostly fun time because the filmmakers often demonstrate they have impressive talents and can deliver an entertaining and accomplished slasher. Hopefully they will exercise more restraint and commitment to a particular vision to find even greater success and produce even better films. 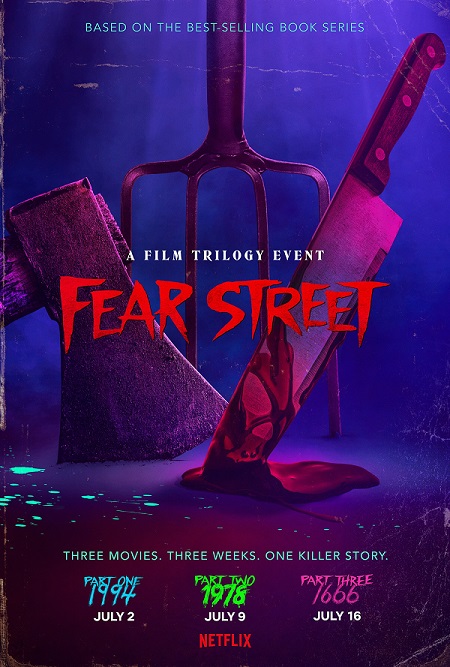