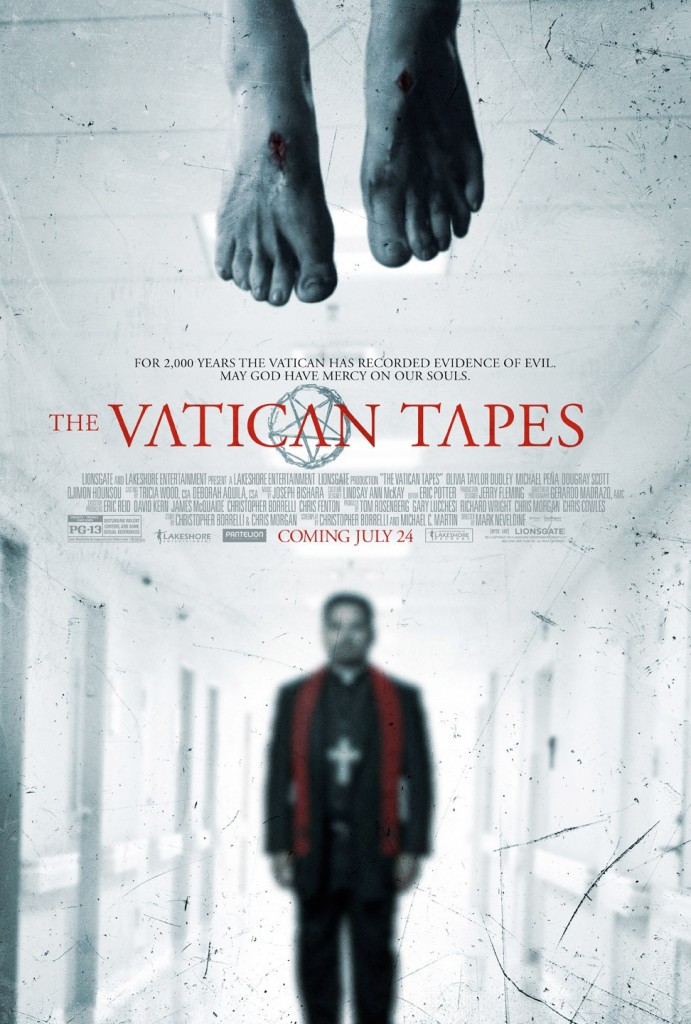 Somewhere over the past few years, the origin story became THE story that Hollywood needed to tell. Case in point, by 2017, audiences will have learned how Peter Parker became your friendly neighborhood web-slinger THREE times. There is a certain something to be said for starting a story in media res; STAR WARS thrusts the audience right into the middle of a galactic civil war, and we all know how well the tale of how Anakin Skywalker became Darth Vader turned out.

The newest possession flick hitting screens this weekend, THE VATICAN TAPES, plays like an origin story of a young priest becoming a “warrior of God,” as well as the origin of the Antichrist. Unfortunately, the beginnings of these characters are riddled with clichés and aren’t half as interesting as how Bruce Wayne became Batman.

THE VATICAN TAPES opens with two elder priests in Vatican City, viewing footage of Angela (Olivia Dudley), who is revealed to be possessed by the Devil. The film then flashes back to explain how Angela — who may or may not reside in Marc Maron’s house — came to be inhabited by this demonic spirit. Angela cuts her finger at a surprise party thrown by her boyfriend, Pete (John Patrick Amedori) and her father, Roger (Dougray Scott). Angela is taken to the hospital, is attacked by a raven, and develops a serious case of hot pipes that has her chugging bottled water like it was… water. A charming young priest, portrayed by an underused Michael Peña, a soldier-turned-Chaplain, takes an interest in the case.

After a serious car wreck and a laughable attempt at suspense — Angel attempts to drown a baby in a bedpan and the director focuses in on the disclaimer “WARNING DROWNING HAZARD” — the possessed young lady is committed to a mental institution, so that not only is the audience treated to by-the-numbers possession clichés, but middling insane-asylum clichés as well. Eventually, Cardinal Bruun (Peter Andersson) shows up to perform the climatic exorcism that we’ve seen a million times before — the ritual takes place in an attic that throws back to the much more entertaining AMITYVILE: THE POSSESSION — only it doesn’t have the creepy make-up effects or unnerving quality to truly put audiences on edge.

It’s not until the final moments of the film, when the Antichrist’s true plan is revealed, that the movie starts to pick up any steam, and by then, it’s too late. There are plenty of subplots introduced that would have made for more interesting films: how the Cardinal himself was once possessed and exorcised, how the archives of the Devil’s work on Earth are being kept in Vatican City, or even the tale of genre favorite Michael Paré as one of the officers assigned to the case in his own hunt for the Devil himself. The ending appears to be setting up a sequel that, if it happens at all, will more than likely go direct-to-video. That being said, the story that this film sets up — a warrior of God versus a powerful Antichrist — seems like a much better ride, and that makes THE VATICAN TAPES that much more of a disappointment.

At its worst, it’s undistinguishable from any possession movie that’s been released since THE EXORCIST in 1973—the devil hasn’t changed much in the past forty years: bad skin, smoker’s voice, speaking in tongues, murderous intent— and at its best, just a movie that bored teenagers will go see this weekend to make-out during. The PG-13 rating hampers the gore that could make the dullest exploitation trash watchable — even the worst FRIDAY THE 13th had a few pretty inventive kills — and the score is so loud and obtrusive, it seems to telegraph the moment your date is going to clutch your arm. The camerawork from director Mark Neveldine switches from kinetic and creative. like his work on the CRANK movies, and voyeuristic, but it’s not enough to elevate the film to much more than late-summer trash, and not the enjoyable kind.