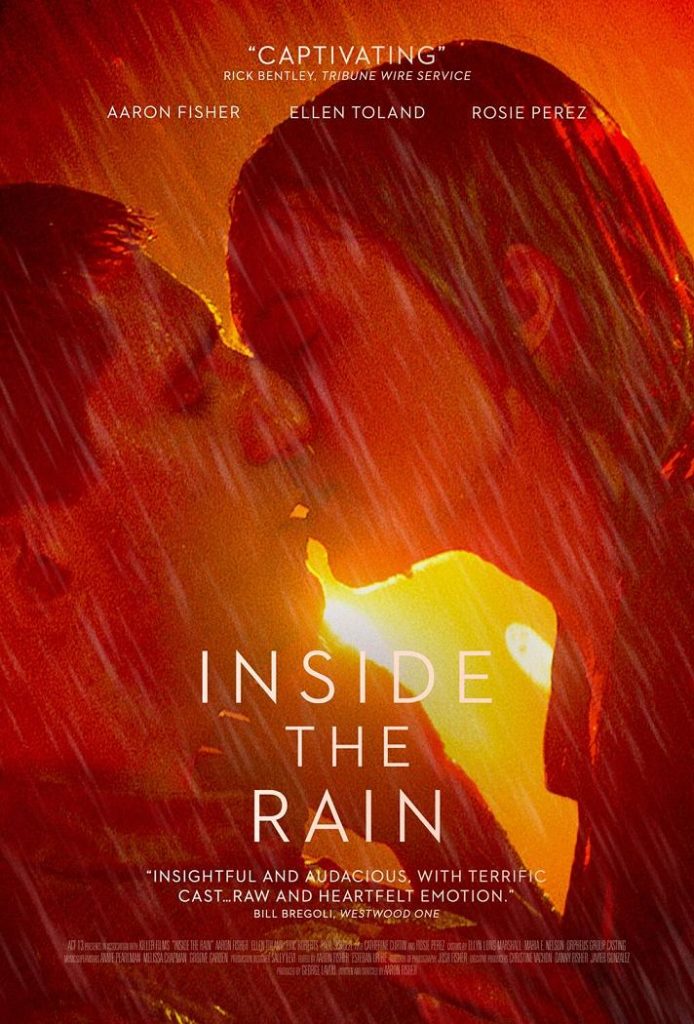 INSIDE THE RAIN is a quirky little film that defies genre or characterization. It’s probably funnier than anything else, but it has a lot of serious issues at its core. It borders on being a comedic romance between a stripper and a college student struggling with severe mental illness, but never really commits to or solidifies that thread. It’s sort of a desperate “let’s put on a show” caper fueled by manic delusion. More than anything, it’s a film that does not shy away from mental illness, and is willing to explore its messiness, its heartache, and its humor.

Like many other marginalized communities, people with mental illness are usually curious and excited to see themselves portrayed in media. Everyone’s experience with mental illness is so different that it’s difficult to label these portrayals as “accurate.” Several of writer/director/lead actor Aaron Fisher’s moments felt achingly true to me, which makes sense, as he also has bipolar disorder. Some aspects were different enough that I felt I learned something new. And some of it actually felt inaccurate to me, which is odd considering his experience. One thing consistent throughout is his empathy for his hero Ben Glass’s plight, even when he makes mistakes – and he makes a lot of mistakes.

The story begins with Ben working with an office for accommodation of disabilities to gain access to a college where he plans to major in film (another commonality I share with the character). He wants to be just like other students, but he can’t pretend he is. Right off the bat, on his first day, one of his classmates makes one of those remarks that is only cringe-worthy to people who struggle with mental illness: “I guess I’m bipolar in terms of my interests.” “I’m really, literally bipolar,” Ben says when it comes to his turn. Or, as he prefers to call it, “recklessly extravagant.”

What he means by recklessly extravagant is questioned by his classmate Daisy when they head back to her place after Ben’s awkward plays at a party. Well, Ben explains, he’s like Odysseus – when he sleeps, he sleeps for ten days, and when he fucks, he fucks the greatest sex goddesses. They have sex, he thinks it means more than it does, she asks him to leave, and the next day he becomes despondent. He cannot concentrate or sit through class, so he goes home to take some pills. He texts Daisy that he’s going to take “a lot of pills.” Then he pours himself a healthy overdose of medication, washes it down with alcohol, and ends up in the ICU.

At a point later in the film, Ben recounts that though he regrets it, this has happened to him so many times he’s lost track. As someone grappling with often severe mental illness symptoms, I admit to overdosing almost enough times to lose track, too, and it hit very close to home. Why do we overdose? Because, as many people think, we’re drama queens crying out for attention? Or because we truly want to escape life? Maybe a little of Column A, and a little of Column B, is the real answer. People who have overdosed as many times as Ben know that it doesn’t usually lead to death, just the hospital. And yet we do it anyway. I explained it to a therapist once as hitting the pause button or just turning the world off for awhile – wanting to sleep a long time, maybe not forever. It’s impossible to explain that state, or that compulsion, to someone who doesn’t understand, or who hasn’t been there. It just is what it is. The movie gets this so, so right. And Ben doesn’t seem to be engaging in melodrama – explaining it and apologizing are all done in his typical deadpan style. Unfortunately, his actions have consequences, however, and when Daisy sees Ben measuring out his weekly medication, she gets scared and calls the police, even though this time he is taking it as prescribed. He has lost  trust as well as his privilege to attend school.

To Ben’s mind, there is only one way to secure justice for his unfair expulsion from school: he must make a movie. The story-within-a-story frame of INSIDE THE RAIN gives it a dramatic, meta-fictional feel. Ben of course plays the hero in his own life story, who was, as he puts it at one point, the “victim of a horrible discrimination.” He writes a script word-for-word about his encounter with Daisy. In one of the most endearing turns in the film, Eric Roberts plays Monty, a failed movie producer living out of his mother’s garage. He convinces Ben that the script is brilliant and he needs to create a fundraiser for it. 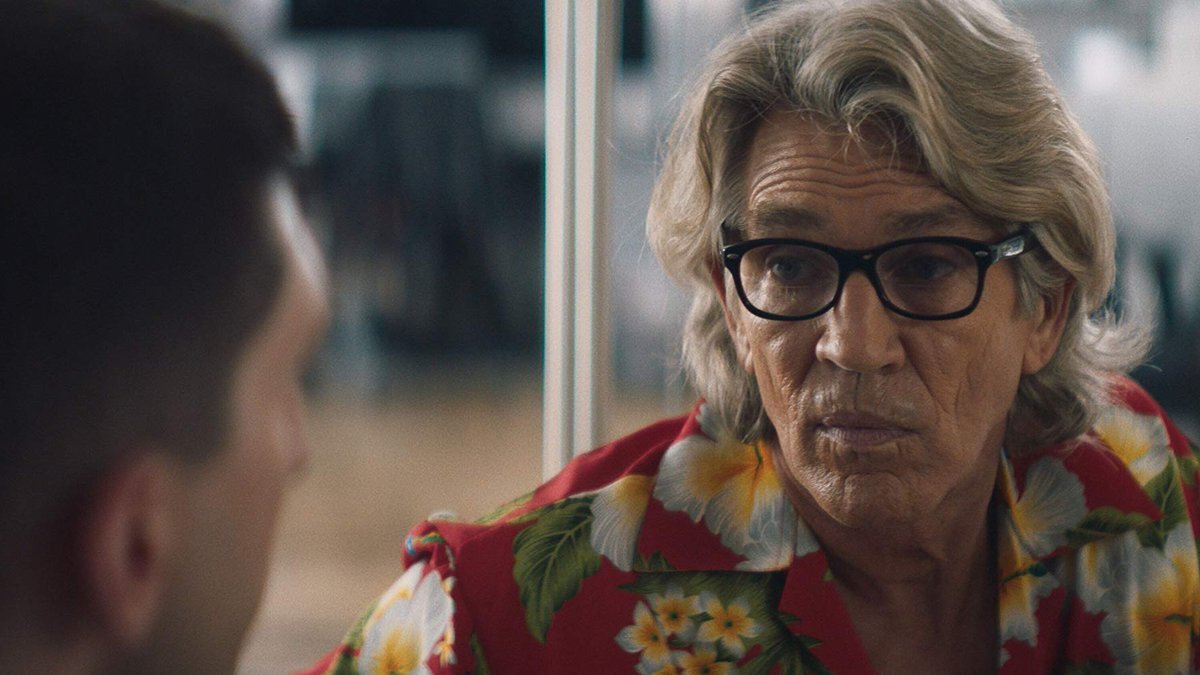 That’s probably enough exposition to set up Ben’s predicament and Odyssean quest. Rosie Perez plays a foil for him in the form of psychiatrist Dr. Holloway, questioning his madcap ideas and exposing his windmill-tilting to the harsh light of reality. A large part of Ben’s narrative is told in her office. Among his flights of fancy, in addition to believing making a movie will exonerate him during a school hearing, Ben seems to truly believe he can embark on a meaningful relationship with a stripper and porn star he defended from attack outside her club, who he also talks into starring in his movie.

And he’s almost right. Like many manic people, Ben believes so strongly in his own heightened abilities that it’s sometimes hard not to succumb to him. His “relationship” of sorts with Emma, played by Ellen Toland, hits just the right note of wavering between fear and falling in love. She expresses uncertainty, but during what is probably the film’s most memorable sequence Ben walks her back to her car playing a song the whole time. “I just like this song,” he says. They walk side by side, taking their time, stealing glances at each other, with only the plaintive music as dialogue. “You’re so ordinary, you make me feel brand new,” the song says as the two anything-but-ordinary misfits share this moment. (I was unable to identify the song, though I really love it and its use is so perfect I wouldn’t be surprised if it was written for the film). By the time they reach her car, she has softened. This makes sense as manic people can be really damn charming when they’re not being scary. I remember the mixed reactions I received during my own manic state of people commenting positively on my bright energy, and people reacting in fear, especially the further untethered from reality I became.

What goes up must come down is never truer than when it comes to bipolar disorder, as Dr. Holloway reminds Ben in her straight-talk fashion. Eventually Ben hits a breaking point after not taking his meds and ends up in a psych ward, a common logical endpoint to these episodes. During his breakdown, Ben screams, “I want justice!” One gets the sense that he is talking about more than his school situation. He is talking about his disease.

I have been in a few different psych wards, and I have never seen one that resembles the one in this film. It’s full of things neurotypical audience members would probably not notice, but the discrepancies jumped out at me right away. Windows with blinds that have cords, when you aren’t even allowed to have your shoelaces for fear of hanging. Two patients unsupervised in a kitchen where they seem to have free reign of the food they eat and drink there, instead of constant monitoring, including diet. Visitors are allowed inside patients’ private dayrooms rather than meeting, again under monitoring, in special designated areas. These are small details, but they come across as odd since it’s hard for me to believe someone with bipolar disorder hasn’t been to a psych ward at least once. But again, different experiences.

My experience with bipolar disorder is also quite different than Ben’s in the film. Ben reads as very deadpan the entire film, even when he’s manic. He appears to be rapid-cycling and to have mixed states, which I have not experienced, so it’s difficult for me to judge the “accuracy” of his portrayal. His speech never becomes rapid, loud, and constant. His speech and disconnect from others almost seemed autistic to me. However, at one point he rattles off an alphabet soup of conditions he has, including OCD, ADHD, and BPD, so his symptoms could be indicative of other mental illnesses, or of an interaction between them all. Co-morbidity does seem to run rampant in mental illness.

However, some things hit uncomfortably close to home. The overdosing. Ben divulging that he has special powers, only needs three hours of sleep a night, and spends the majority of time in his bed ordering in. And the manic delusions – that making a film about his experience will bring him justice, and that Emma needs to be the star and could be his girlfriend. Mania is a funny thing. It’s exciting and melancholy at the same time. It’s the fuel of beautiful dreams that are going to eventually shatter. And INSIDE THE RAIN gets that just right.

Aaron Fisher is a confident and assured director. He is the CITIZEN KANE of his own film, a larger-than-life character with complete creative control determined to conquer the world. The majority of the film is populated with his expressive features, often in close-up, sometimes from above, as if the world is bearing down upon him. The casting and performances are stellar, from Rosie Perez’s tough-love psychiatrist to Eric Roberts’s kooky producer to Ellen Toland’s cautious Emma to Catherine Curtin and Paul Schulze as Ben’s long-suffering parents. As most parents in that difficult situation do, they love their son and want him to have the best possible life, but they also want to protect him and help him control his illness. It’s a tough balancing act to pull off.

I think precisely because INSIDE THE RAIN is such an oddball, tonally inconsistent film, it took me awhile to process it. The film appropriately feels like bipolar disorder itself. Sometimes it feels uncomfortable to laugh at Ben because the funny things he says are so clearly the result of mental illness, and I wonder how it would play with an audience. The truth, however, is that mental illness can be really funny when it’s not being so damn sad. The film is full of what are clearly manic delusions, but they’re so fantastic that you want badly for them to be true, even when you know they’re not and you’re heading for a crash. The more time I had to think about it and to write about it, the more I appreciated it for that very reason. While people with mental illness are generally interested in portrayals of their experiences on the screen, many of them are wildly inaccurate. INSIDE THE RAIN is an inside job – a film made in every sense by a person with bipolar disorder, trying to express to both insiders and outsiders what that experience is like. It’s both a mirror and a window. Films like this are rare and valuable. Aaron Fisher is an unusual and important voice, and I hope he keeps making movies.

The film has been selected as January’s feature at the New Filmmakers Los Angeles Film Festival screening on January 11th, 2020, and will be released in theaters beginning on March 13th, 2020. 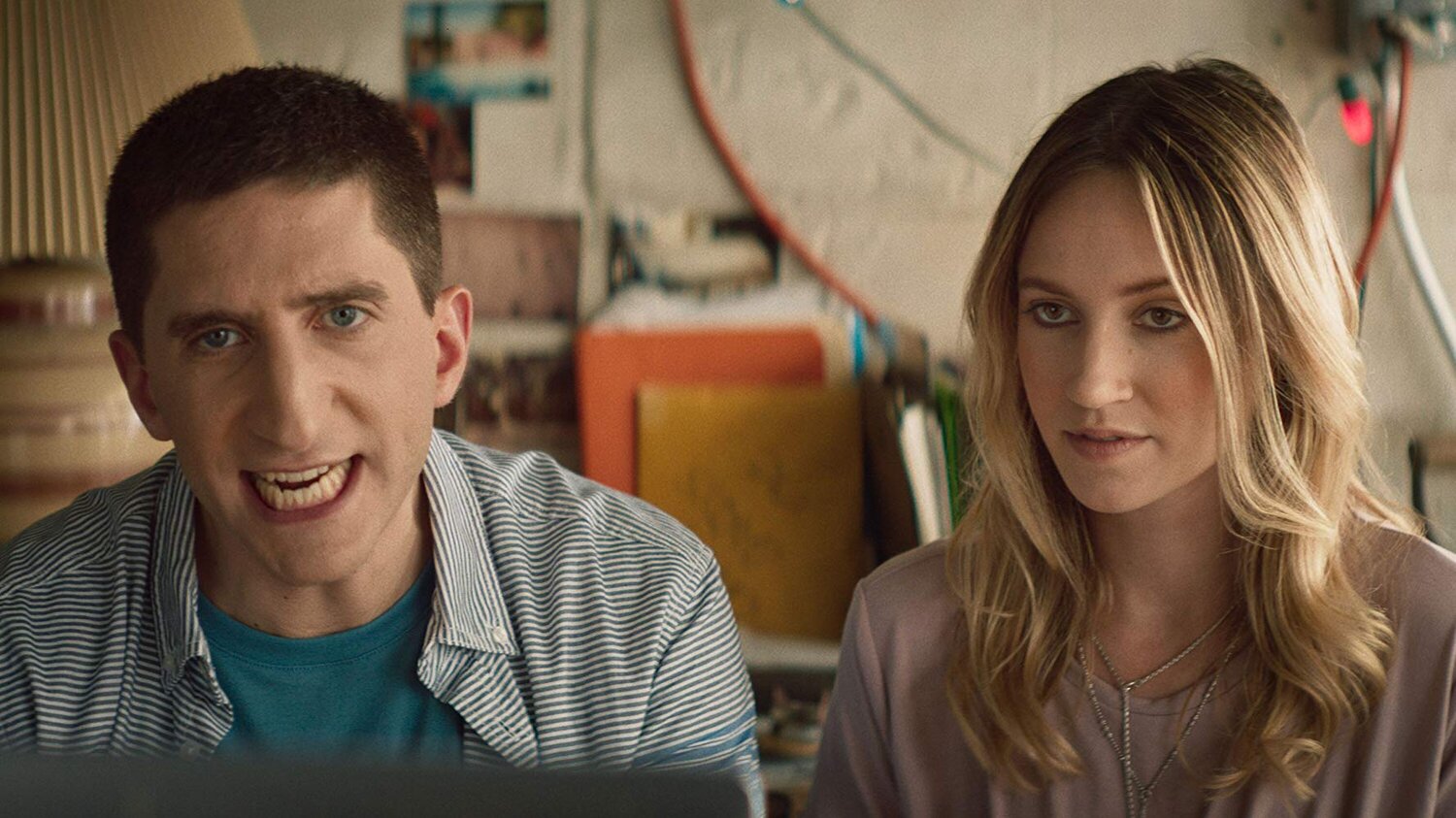 This review was originally published at Voices & Visions and is reprinted here with their kind permission.