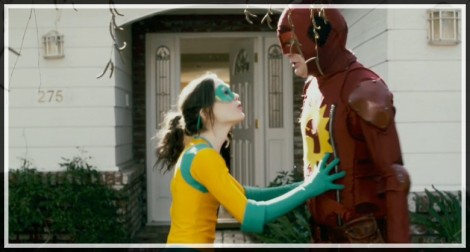 Have you heard? James Gunn, the director of SUPER, SLITHER and the upcoming GUARDIANS OF THE GALAXY, and co-writer of TROMEO AND JULIET, is a slut-shaming, homophobic monster that needs to be removed from the upcoming project based on the Marvel comic, at least according to the folks behind this petition. The main issue with the Gunn stems from an article he wrote on his site called “The 50 Superheroes You Most Want to Have Sex With,” a write-up of an informal survey of online participants published nearly two years ago, on February 17, 2011. While Gunn has taken the article offline, on the internet, everything, even my 1998 GeoCities site, lasts forever, so you can still read a cached version here.

While the article was noticed a couple of days ago, the alleged shit hit the fan yesterday with a piece by The Mary Sue’s Susana Polo that tore the piece apart with accusations of “slut-shaming (on only the female characters) and anti-gay language that Gunn directs towards the majority of the male characters.” The story went wide, even to the point of hitting the Hollywood Reporter. Polo takes issue with a number of things on the ancient piece, written just before the release of Gunn’s SUPER, though she does say that:

“…there’s nothing wrong about running a poll for the most sex-able superhero on your site, especially one where you embrace the fact that Batman and Gambit come in within the top five. There isn’t anything wrong, in that context, of choosing art that sexualizes the characters in it. There isn’t even anything wrong with talking explicitly about sex in your commentary on the poll results.”

Unfortunately, Polo, and others who’ve jumped onto the anti-Gunn bandwagon, follow this by accusing Gunn of being some terribly close-minded person by doing exactly what they’ve just said it’s okay for him to do. It’s the internet reactionary version of “I’m not racist, but..,” because nothing Gunn has in the article comes off as anything more than mild joking and inoffensive plays on sexuality. 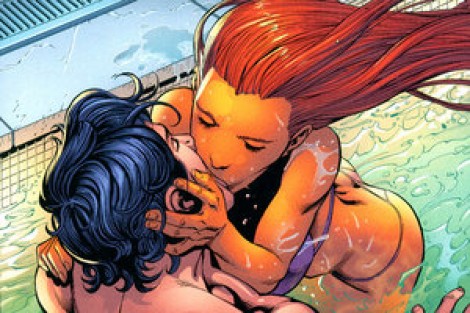 Let’s start with the accusations of homophobia. As DG’s resident gay guy, I can honestly say I don’t find anything homophobic about Gunn’s piece at all. Polo cites the Gunn’s piece on Gambit thusly:

“’My girlfriend voted for this Cajun fruit.’ He goes on to say that the idea of having sex with Gambit himself makes him sick to his stomach. Because, again, imagining a man as attractive to a woman necessarily requires you to imagine him as gay.”

“Cajun fruit” aside (has anyone really seriously called a gay person a “fruit” unironically since Archie Bunker left the air?), Gunn doesn’t “imagine a man as attractive to a woman.” Gunn, at the idea of his girlfriend wanting a threesome between them all, imagines himself having sex with Gambit. Which makes him sick to his stomach, a perfectly normal reaction, and one I’d have if I was to imagine some random vagina as well. Here’s the thing: NOT WANTING TO HAVE SEX WITH A MAN DOES NOT MAKE YOU HOMOPHOBIC. If it did, all of the dares I proposed in college would have panned out better. It’s not that “imagining a man as attractive to a woman” requires you to think he was gay, it’s that HAVING SWEATY GAMBIT MAN-SEX makes you think so.

The misreading of Gunn’s alleged homophobia doesn’t end there. Polo cites his piece on the newly rebooted Kate Kane character, a lesbian, as another example, with the note that he is “hoping for a Marvel-DC crossover so that Tony Stark can ‘turn’ her.” On the surface, it’s really nothing more than a goofy bad joke with the unfortunate idea that stereotypically “masculine” men can “cure” women of homosexuality, but when Polo calls this the “entirety of what he was to say about Batwoman” is a bit of a cheat, as it’s not Gunn’s joke about Batwoman that’s an issue, but his take on Iron Man’s hypermasculinity, from earlier in the piece: “Personally, if I were into dudes… I’d want a dude who had, you know, experience – someone who has fucked most the superheroines on the planet, and knew what he was doing. I’d go Tony Stark. Although I’d ask him, kindly, to lose the current prison pussy and go back to the ‘stache.”

As it’s earlier in the piece, Stark’s mannishness is set up as a running gag, one that comes into play during the Batwoman piece. Is a “masculine” man “converting” a lesbian a ridiculous cliché? Sure! It’s not much of a joke. But it is, obviously, a joke, and it’s hard to read anything more than a minor eyeroll at the stupidity of it.

Need more proof that Gunn’s not a homophobe? Why not actually do a little research into his Facebook page and check out his post from October 11? 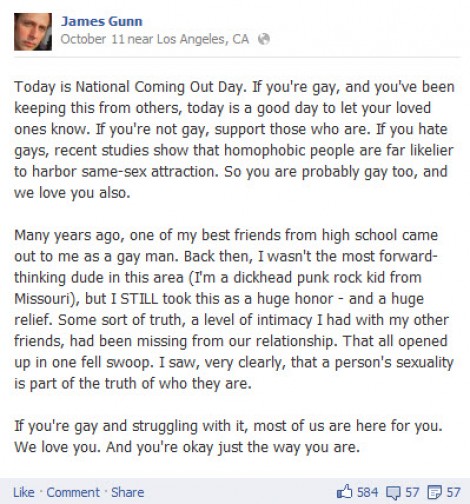 Sure, some of Gunn’s comments were stupid, but anyone who reads his piece and starts screaming “homophobia!” clearly has a protest of CRUISING to get back to in 1980. There isn’t a person alive who hasn’t said something that can be interpreted as awful, but most people are able to interpret more than the surface level and look into the context and meaning of the person behind it. When it comes to inadvertently-perceived homophobia, James Gunn didn’t build that.

Enough of the gay bashing. Let’s move on to the slut shaming.

Polo’s other major accusation of Gunn’s piece is his alleged misogyny, an accusation that’s hard to dismiss in a piece about, well, fucking a bunch of superheroes. She cites Gunn’s dismissal of Black Canary because she has sex with Green Arrow, attributing this to the idea that “women are qualitatively less attractive because they have sex with people,” essentially the basic definition of slut-shaming. Except that it’s not true – Gunn is squicked-out by Canary because she has sex with Green Arrow, a surly, womanizing hippie-type whose wick has been dipped in God knows how many sketchy areas. It’s not that Canary is bad because she’s been “around,” it’s that she’s not a sure thing because her judgment is questionable.

Gunn even points out the fact that much of female characters’ overt sexuality has been the result of male decision-making. Tigra’s erratic behavior is mentioned as the result of being “consistently poorly-written,” and Starfire’s physique resulted in “why, by the age of nine or ten, comic books had ruined real women for me forever.” Gunn knows that the pictures don’t represent reality – or else why would he even try to get away with a gag on the Stephanie Brown Batgirl that only works on a shock level, claiming “being a teen mom and all, you know she’s easy.” 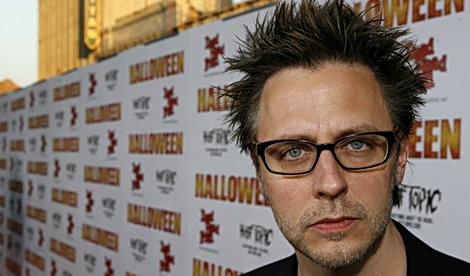 The most indefensible of Polo’s attacks would seem to be the one she makes regarding Gunn’s assessment of Spider-Woman, whom she would be correct in assuming obvious misogyny if he had simply written, as she claims, “he wouldn’t want to look at her face while doing it, so he’d make sure to ejaculate on it.” It’s almost as if half of the description, in which Gunn mentions that his memory of her as a Skrull leader who tried to conquer the world, thus setting up the forced facial as a grudge settled in order to overwrite her betrayal, somehow managed to get lost on the way to her monitor.

In any case, there’s really nothing on Gunn’s piece that doesn’t read as a joke, however bad it might be, and when it gets to the point where we’re defending the honor of fictional characters, it’s difficult to take the whole thing seriously in any case. Why a 22-month-old piece (the fact that Polo’s article is tagged “Today in Depressing” is, in itself, pretty depressing) that is clearly not coming from an anti-woman or anti-gay perspective should have any factor on Gunn’s helming of GUARDIANS OF THE GALAXY is anyone’s guess, though Polo’s statement that “we live in a world where Brett Ratner is pressured into resigning from producing the Oscars for a gay slur” is true – I just think it’s a tragedy where Polo thinks that it’s a good thing.

Really, the most offensive thing about the piece is that Steven Sadowski’s version of Hawkman, with whom I’d do things too lurid for even a site like this one, is nowhere to be seen. 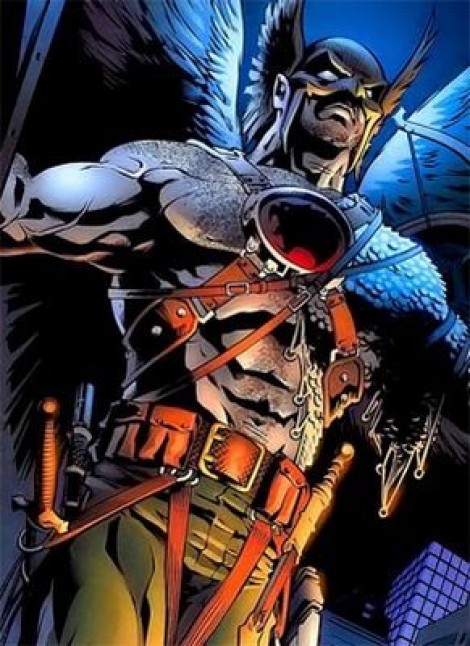 It’s not as though there isn’t plenty of sexism and homophobia in psychotronic fandom. Tony Harris went on a rant about women who aren’t “REAL Nerds” that met with some well-deserved derision. Audience and critical reaction to FATHER’S DAY launched a valid discussion of gay panic in genre fandom. The likes of Dave Sim and Orson Scott Card are well known for their blatantly ancient attitudes toward women and gays, respectively. But screaming homophobia and sexism at any piece that even mentions gays or women in a jokingly non-glowing light distracts from those whose those intolerance and outdated ideas are genuine.

UPDATE: James Gunn has posted an apology to his Facebook page. 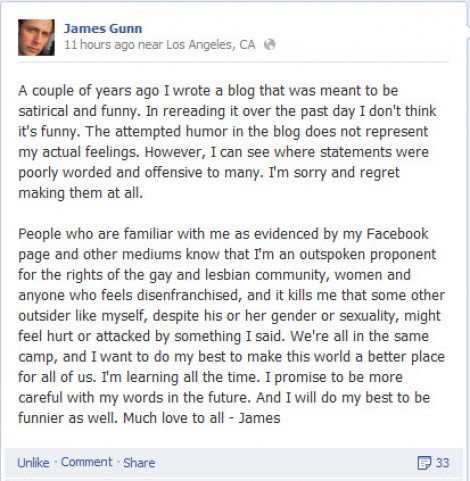 It’s a fair point, and one that serves as much better than the “I’m sorry YOU were offended” that we would get out of someone who didn’t genuinely regret being misinterpreted as someone whose views are archaic and potentially dangerous. It is probably for the best that he doesn’t use the “it was a joke” tactic as, as mentioned, the jokes just aren’t very funny, even if they weren’t ill-intended.

We wish Gunn the best of luck on his endeavors.