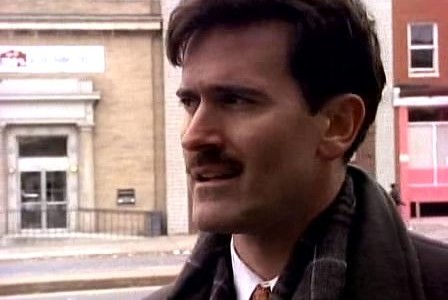 Cult film luminary Bruce Campbell is back with a new book, Hail To The Chin: Further Confessions Of A B-Movie Actor, a follow up to his 2001 autobiography If Chins Could Kill. Assistant editor Mike Vanderbilt caught up with the Ash Vs. Evil Dead star during this year’s solar eclipse, which thankfully didn’t inadvertently summon any Kandarian demons. The Book Stall is bringing Bruce Campbell to Chicago for an appearance at the city’s premiere movie house,  The Music Box Theater on Friday, September 1st.

Daily Grindhouse: You were around for the big eclipse in the ’70s, right?

Bruce Campbell: We were shooting EVIL DEAD [during the eclipse] back in ’79. 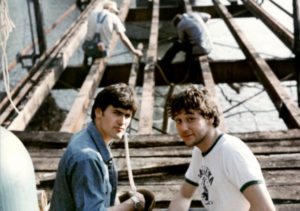 DG: Did anyone on set stare up at that one? 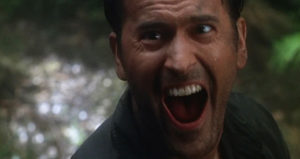 DG: In 1995, you appeared in a bit part in Michael Crichton’s CONGO. I had read somewhere once that you were deemed too good-looking for the nerdy scientist lead. Is that true?

BC: I didn’t make that decision. I never heard that, I didn’t audition. I met with Frank Marshall, and said “Frank, I’m the guy you want in the jungle with you. I’ve done a lot of tough stuff.” I don’t think he had any idea who I was, and he said, “give him the boyfriend part.”  It was fun to have a small part in a big movie. 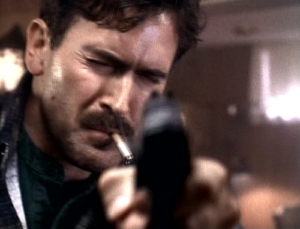 DG: One of your oft-overlooked dramatic roles was an appearance on Homicide: Life On The Street.

DG: How did you end up in that role? Did you audition? Did they know who you were?

BC: No. It’s even more ridiculous than that. I had a deal with NBC—you have what they call an overall deal, where they give you money to do nothing while you look around for stuff. In the meantime, they put you on their shows. They had Tom Fontana contact me and Tom did one of the most startling things I ever experienced. He goes, “what story do you want to tell?”

I thought about it, and right around that time was the whole O.J. Simpson thing, and there were a lot of questions about justice. I thought about, what if a family member of a cop is killed and that guy gets off but then the cop and his partner go take that guy out and they don’t get off? I swear to god, I pitched it to the guy, and he goes, “ok, we’ll get a two-parter,” and he hangs up. I said, “What the hell was that?” We did the exact story—I didn’t talk to him again until the shoot—but it was the exact story. It was really cool; a very flattering process.

DG: Did you get story credit on that one?

BC: Oh, hell no. But I was very happy to have input.

DG: You probably don’t get that a lot as an actor, they just want you to read the script.

BC: Every situation is different. If I’m a producer, I do whatever the hell I want to. 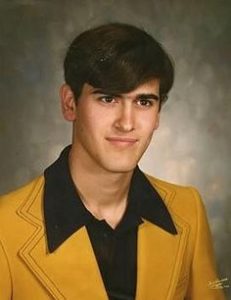 DG: You’re a born and bred Midwesterner. In your first book, If Chins Could Kill, you said you weren’t the kind of guy to have a cup of coffee and hang out before shooting, you would get right into the work day. Is that a Midwestern work ethic kind of thing? Is it how you were raised?

BC: A lot of the guys I knew worked in the factories. Detroit was a working stiff town. I learned [to act] from a guy as an apprentice up at a professional theater right out of high school. I did summer stock. I was just one of the gophers, one of the schmoes who worked at every show every week. The head of the apprentices said, “guys, when your day starts at nine, or whenever I tell you its gonna start—you’re gonna have a broom in your hand at nine. You’re not gonna have a cup of coffee at nine, you’re not gonna make a phone call at nine, you’re not gonna have a cigarette at nine. You’re mine at nine, got that?” He goes, “you get ready to work at nine,” and I appreciate that. I always get on set; you never have to chase me. You can’t get off set until you get on it. It’s just that simple.

DG: You’re always pretty quick in interviews, and you’re always very funny. I saw you at the Bruce Campbell Horror Film Festival last summer, and your bit about Dino De Laurentis wanting that skeleton to say “fuck you” in ARMY OF DARKNESS sent me into several laughing jags. 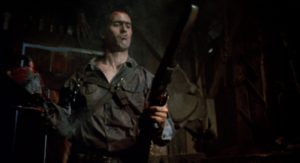 DG: With the character of Ash, you once said in an interview that Ash would be stupid enough to come back to the cabin in EVIL DEAD 2 because he had such a good time the last time, even though that all had to do with acquiring the rights to the original film. Has there ever been a moment on Ash Vs. Evil Dead where you told the writers, “Ash isn’t THAT stupid?”

BC: Ash is not stupid. That’s the wrong word; he’s crazy like a fox. He’s a survivor. He’s more of an idiot, he’s not stupid. That’s the difference, and that is a key distinction. Ash does idiotic things. Ruby threatens him on the show, “if you say one more stupid thing” and I’m like, “I’m gonna say a lot of stupid things.” I like playing the character a lot. It’s been great and gratifying twenty-five years later. 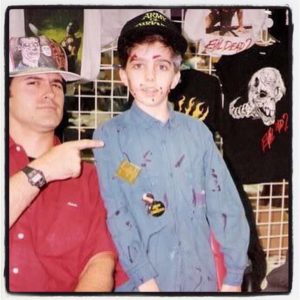 Bruce Campbell and the writer, Mike Vanderbilt, at the Fangoria Weekend Of Horrors at the Odeum in Villa Park, IL, October 1992.

DG: I met you at a Fangoria Weekend Of Horrors in Villa Park in ’92 when I was 12—ARMY OF DARKNESS hadn’t even been released yet—and there were just fans chit-chatting with you at the booth. Now you have a line around the block at big conventions. Does the rabid fan base astound you?

BC: It’s happened over 35 years, so there’s nothing to be astounded by. It’s just grown, like a wart. 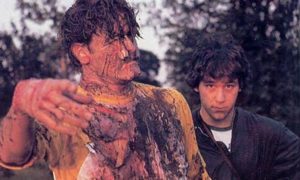 DG: WITHIN THE WOODS has been long been tied up for one reason or another. I’ve read it had something to do with music rights, as you had used some popular tunes from the time on the soundtrack. What were you guys—a bunch of Midwestern guys and gals—into in college and high school?

BC: Some of the crew members listened to David Bowie’s “Young Americans,” stuff like that. I was a Bob Seger fan, and I’ll take Motown anytime. But the reason WITHIN THE WOODS hasn’t come out—it isn’t like we used some rock ‘n’ roll song, it’s that we used music that didn’t belong to us from other soundtracks. At the end of the day, that movie was used to raise money for EVIL DEAD. It was not meant for public consumption. Nobody’s ever going to see that thing in high quality, because it was never meant to give out. There are shitty versions on the interweb, but Sam Raimi’s loath to show his pimply ass to the world.

DG: What does Bruce Campbell do on his day off?

BC: I take it off. I just got back from lollygagging. There’s a bike rental program in a lot of cities: you just take your credit card, use a kiosk, take a bike and take off. I went for a two-hour bike ride this morning. 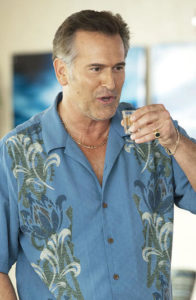 DG: Did you expect BURN NOTICE to take off the way that it did? It ran for a long time.

BC: Whenever people ask, “did you ever think,” the answer’s “no” because it’s just another frickin’ pilot. I was very confident that it was going to go [well]. I thought the elements were very good, I thought it was a very unique concept, and I’m surprised it lasted seven years. I’m surprised it had the legs it did. It’s always great when your show is number one on cable. There’s nothing ever wrong with that.

DG: Can you tell us a little bit about what to expect at the Music Box Theater here in Chicago on September 1st?

BC: Last Fan Standing is a game show that a buddy of mine developed, Steve Sellery. I went to host this trivia show for the troops down in Texas a few years ago; it was a format where everybody who comes in gets a clicker, everyone plays. Anyone who comes through that door could take it all. We don’t vet people; you don’t have to compete in a first round qualifier. They get a clicker, and then he ran them through this military-based trivia. I said, “you know, dude, in my world, doing conventions, you could just convert this format into a game show for geeks. It’s geeks only: no history, no geography. Instead you get, ‘how much does Thor’s hammer weigh’ and ‘what is Harry Potter’s wand made of.'” Stuff like that.

DG: What’s a movie you love that everyone seems to hate?

BC: None. I have excellent taste. 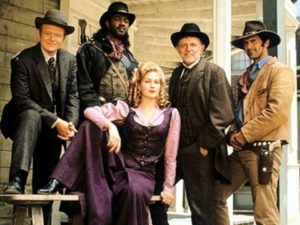 DG: Do you think we’ll ever get to see the return of BRISCO COUNTY, JR?

BC: I never thought I’d be playing Ash 25 years later so I guess I shouldn’t say anything. Never say never. Maybe, if it makes sense. Carlton Cuse has gone on to be a big TV producer. I would do a two-hour TV movie, BRISCO RIDES AGAIN.

The Book Stall presents AN EVENING WITH BRUCE CAMPBELL goes down this Saturday night. The show is now sold out!