YOU GUYS. I got to interview Cassandra Peterson (aka Elvira, aka Queen of Halloween, aka my idol) and chat with her about her new book, horror hostessing, and running for president!

I’m now black and blue from pinching myself to make sure I wasn’t unpleasant dreaming!!! Squeaaaaaaaaal!

Daily Grindhouse: I’m such a huge fan of yours and this is my first interview! I’ll try not to nerd out on you too much!

DG: I’m so excited about your coffin table book! There are so many iconic photos in there but some never before seen ones too! Were they all hiding in a mysterious trunk somewhere in an attic in Fallwell, MA?

CP: (laughs) More like a mysterious self-storage unit in Southern California! I had boxes and boxes of photos I have taken over the years, I mean 35 years worth and hundreds and hundreds of photo sessions. I wish it was more glamorous but I had them all kind of thrown into these boxes and forgot about them. I always thought at some point I would get it together and have the time to go through them, pick out pictures, and make a coffee table book out of them. But I really never got it together until Tweeterhead came along and said they would put it together for me. It’s a super time consuming project and I was involved a lot but they did all the legwork so that made it doable!

DG: One of my favorite photo shoots you’ve done is the moon bathing shoot and I love your portraits by Austin Young. What are some of your most favorite or memorable photo shoots that you have done in your book? 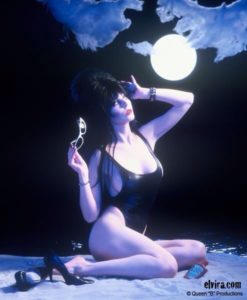 CP: Well certainly the one where I was 7 months pregnant. I had to be hauled up into this bathtub that was hanging from the ceiling so I could keep my stomach underwater so nobody could see it! That’s in there and some of the outtakes of that day. That was one I’ll never forget, that’s for damn sure. Another one in there with my cat Hecate. Everybody always comments that “oh my god that cat! How did you get that cat to make that face? She looks so perfect! And you look good too!” It was a million photos of trying to hold the cat and she’s trying to get away.

DG: The photo of her meowing?!

CP: Yes! It was the perfect photo and now they would just say “Just get a picture of a black cat and you Photoshop it in” or whatever but no, hello, that was not happening back then! We did everything in real time and there was no Photoshop! I swear we must have taken a thousand pictures and I think I had about 10 or 12 cat scratches on my hands by the time we got done. She was not so excited about doing a photo session! Cats really aren’t, you know? 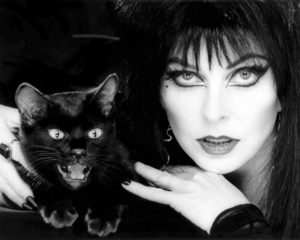 DG: I know that Vincent Price was one of your role models growing up. Did you ever think when you started 35 years ago that you would be such a huge horror icon like he is?

CP: No I did not! I loved him and when I finally got to meet him as Elvira it was like a dream come true. It was a big, big, deal for me. To imagine that I would actually become, you know, not like him, but in that realm kind of like an icon like he was for the whole horror movement, it was pretty damn crazy when I think about it. One thing I wanted to mention in the book is I don’t know if you saw that little picture of me when I was 5 years old. My mom made me my first Halloween costume and it was orange and black crepe paper with a crown and scepter. My mom just told me this when we were putting the book together and she sent me the picture and I was said, “what the heck was I dressed as?” and she said, “you decided you were going to be the queen of Halloween”

CP: I know! How bizarre is that?! I swear, I almost fell over. I called Chad and said, “We HAVE to put this picture in!” yeah, so, again a thing I would never dream happening and then meeting Vincent Price. My family ran a costume shop so I was Halloween’d out every year. It was all these things that happened early on that ended up pointing me in the direction of what I finally would become. 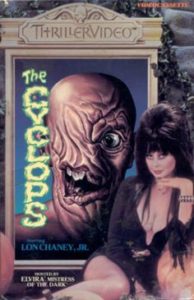 DG: What Horror Hosts do you like a lot? Did you have, like, a pinup of Svengoolie in your locker?

CP: (laughs) You know, no, unfortunately because I grew up in Kansas until I was 7 and then in Colorado Springs and then there was no such things as horror hosts where I lived so I wasn’t aware of horror hosts until I became one! And then I started finding out who Vampira was, who Zacherley was, but I had never seen or heard of them until I was already Elvira. Then I had a big catching up education to learn about Svengoolie and all these people who I eventually met and learned about. So I wasn’t aware of it until I actually was one! 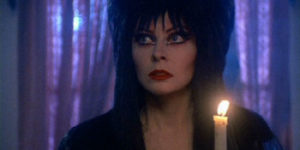 DG: You’re such a huge influence and role model to myself and so many others. Do you have any tips or advice for horror hostesses trying to bust into the business?

CP: Interesting that you used the word “bust”. Well let’s see, I would say you need a unique character and the way I got a unique character was a total accident. What happened with me was I was in the Groundlings and was doing a wacky character, a comedy character that was an actress with a valley girl accent and kind of a bimbo. The director that hired me for the local television station here in LA loved that character so he said, “I want you to do THAT character but come up with a spooky look because you’re going to be hosting horror movies!” I was like “uh, ok, those SO do not go together. That’s SO wrong.” But I went ahead because that’s what they wanted me to do. So I would suggest to up and coming horror hosts kind of the Chinese menu approach which is one from column A and one from column B. Like get a look over here and then get a personality from another column that the two have nothing to do with one another. And then you will have a completely unique character. Because if I would have been told, “We want you to be a horror host” I’m sure I would have been talking like, “Come in, dahling. Drink a glass of blood” I would have gone for the typical what everybody would go for and that pretty much what the other women who were on the interview were doing. So having not chosen but kind of just falling into doing a different character with that look created something new and unique. Not the same old, same old.

DG: Congratulations on running for president!

CP: Thank you! I can’t wait to be the president! 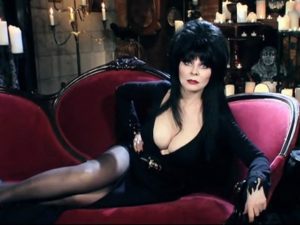 DG: You’re obviously a shoo-in so as Mistress of the United States of America, will Halloween finally be made a national holiday?

CP: Oh absolutely! We’ll not only have the day off but the MONTH off! It will be an entire month of Halloween! Because it’s getting longer and longer every year. I started doing my show at Knott’s Scary Farm on September 22nd this year so it might just be year round by the time I get done. But, yes! I would definitely make Halloween the #1 holiday because it really, really is the best holiday! I’ve always said that. You don’t have to buy any gifts for anybody! You don’t have any stupid dinner with your relatives! You just dress up, people can’t tell what you look like, and then you can perform some really bad behavior and no one knows it you!

Peterson’s new coffee table book, ELVIRA, MISTRESS OF THE DARK is available today from Tweeterhead Publishing! You can check her out on select nights at Knott’s Scary Farm performing the BEST STAGE SHOW EVER. Like, way better than Hamilton.