Starting in 2012, Eric Szyszka, one of the co-founders of the hilarious WE HATE MOVIES  podcast premiered a podcast project that would take him to some strange and unimaginable places. BLAME IT ON OUTER SPACE, brought to us via the Sideshow Network that delves deep into the never-ending world of conspiracy theories, paranormal activities and all manner of oddities and occult things that make up our world today with the help of special guests and experts. Also, it’s pretty funny. And maybe just a little spooky.

Ever wonder if we’ll see a resurgence of Andy Kaufman in our lifetime? Look no further than “Case File #8026: Andy Kaufman’s Faked Death,” where Eric, his intrepid co-host Ben Worcester, and Eric’s WE HATE MOVIES co-host Andrew Jupin dive into the tangled web of one of the greatest conspiracies of all time. Montauk Project? The gang’s got you covered. There are so many conspiracy theories, it’d give Fox Mulder an erection faster than you can say Viagra buffet. Slender Man? You betcha. BLAME IT ON OUTER SPACE has more creepypasta than a haunted Olive Garden. Campfire tales galore for the avid listener. Most recently, they even cover the hottest debate of all time, is it Berenstain Bears or Berenstein Bears? You’ll have to listen to find out! 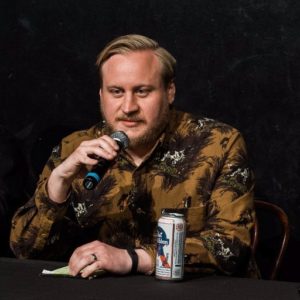 Recently, DAILY GRINDHOUSE took some time out to talk to the host who dares to bring you the stories right to your doorstep (or wherever you listen), Eric Szyszka:

Daily Grindhouse: Thanks for taking the time out, Eric.
Eric Szyszka: Time is but a construct, but thank you as well.

DG: What gave you the idea to do “Blame It On Outer Space?”

Eric Szyszka: I was standing on my toilet and I was hanging on a clock. Next thing I knew, I fell and hit my head on the sink. That’s when I came up with the idea for BLAME IT ON OUTER SPACE.

DG: Are there any stories that you knew you just had to do for the show?

ES: Of course, and many yet to be covered. I think conspiracy theories and the paranormal is a very intriguing subject seldom looked upon with our particular angle on things. I think Nazi UFOs was one I was holding onto for a while and we ended up doing that episode with former Governor Jesse Ventura. This was quite a thrill. The man is a hero of mine.

Besides that, crop circles, Slender Man, Andy Kaufman’s faked death, there were so many things I knew from the start we had to discuss. Things I read about on the Internet or saw covered on those creepy late night TV shows. You know, those weird shows they air at night to scare you. Jay Leno? Future case file.

DG: Are there any conspiracies or stories that you just won’t do a show on? Something that may go too far for average listeners?

ES: I’ve tried to shy away from 9/11 but that’s mostly because I don’t want to be killed by federal agents. I think I may have said too much already… Next question.

DG: Is there a guest that you absolutely would love to have on the show?
ES: I’d love to have more regular people on. We did a few call-in episodes where listeners would call up and talk to us about various conspiracy theories they think are going on within their local communities or hauntings and things they’ve experienced. I liked that, I’d love to move this show into that realm if it picks up enough steam. Our phone episodes are called Open Lines and are available on BlameItOnOuterSpace.com, iTunes, et cetera, et cetera.

DG: What episode would you recommend to newcomers? “Can Cats See Ghosts?” was my introduction and that was the perfect spot.

ES: I think one of my favorite episodes is a recent one called the Mendela Effect which addresses alternate universes, dimensions, and of course the BERENSTAIN BEARS The heart of that is people remember it being BerenSTEIN bears, not STAIN, and this is proof of a tampering within the space/time continuum. Checks out if you ask me. It was a fun one too because we had a great guest for that show, fella by the name of Phil Gonzales, who is a BERENSTAIN BEAR expert. Wild stuff. 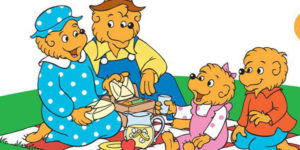 “Can Cats See Ghosts?” is an interesting episode because it’s also just my co-host or co-ghost as we like to say, Ben Worcester, and we just go through it together. There’s been several times when I’ve had a guest cancel or not show up and we went this route. I am actually excited to focus more on the two person podcast and more random phone stuff over having a guest in studio. Ben is great enough, so who needs guests all the damn time?

DG: Do have a word to any potential viewers who are joining your show?

ES: VIEWERS? I thought it was an audio podcast, are you a man from the Government? I mean, WATCHING me? It’s an enticing idea, for sure. I get that. However, to potential listeners, I’d like to say: Take off your shoes. Stay a while. Older episodes are a bit slower, we didn’t find the footing right away, and the show has gone through several “reboots.” I’d say start with a few recent case files and then go back to the older ones.

DG: How would you pitch them on listening in?

DG: What episodes and stories can we expect in the future?

ES: Well, I’ll say Ben and I just had a very illuminating conversation on the Chupacabra — made even more fascinating because Ben was out of the studio and in the field, talking to me via walkie-talkie as he explored, let’s just say, a very strange place.

DG: And finally, will we ever see a crossover, where Eric Szyszka from “BIOOS” crosses over with Eric from “We Hate Movies?” Or would that cause an unstable rift in the time space continuum?

Update: Our thanks to Eric Szyszka, who has mysteriously disappeared after this interview was conducted.