DAILY GRINDHOUSE had the pleasure of chatting with SiREN director Gregg Bishop about the V/H/S spinoff film.
Daily Grindhouse: This film was adapted from the short AMATEUR NIGHT that played as part of the horror anthology V/H/S. What was the process of adapting a short for a feature-length film like?
Gregg Bishop: The script as laid out by David Bruckner was easy to adapt. By design, the guys are jerks in the short, whereas they have to be heroes in the film. Also, the short ends with a kind of surprise. In the feature film, it’s not a surprise, you go in knowing there’s a supernatural creatures and it evolves from there.
DG: What was it like having a significant amount of the screen time devoted to a character who is a supernatural creature?
GB: I think you have to go in knowing that this is a great misunderstood monster, like Frankenstein. The character just does what she is designed to do, and in this case the character was designed for commitment.
DG: How did you manage to balance the tone between the bachelor’s party and the more frightening elements of the film?
GB: From the bachelor’s party, the script is full of twists and turns, is unpredictable. And we’re subverting the genre by having a girl pursuing a guy. Usually, a guy is pursuing a girl. This is breaking with horror convention.
DG: There’s a sort of push-pull relationship between Jonah and Lily throughout the film. How do you maintain that tension, where they both want to help each other?
GB: I think it’s important to remember that Lily is not a villain, she’s a victim. You can explain her actions by realizing that they’re in her nature, like Frankenstein or King Kong. 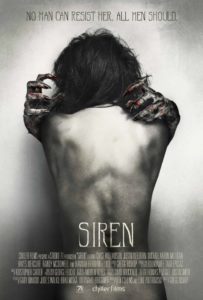 DG: How did you create the atmosphere of the club, which was so central to the narrative of the film?
GB: In principle, it could have several spin-offs or sequels. You start to get into how much do you show vs. what you don’t show, where every character has a backstory.
DG: I saw you also worked on the visual effects in the film, which were strong. What inspired you in the creation of Lily?
GB: We did as much as we could in camera, on the set and then we augmented in visually, just waiting for the right moment. There are limitations on what you can do with practical effects.
DG: What was it like working with David Bruckner (who wrote and directed THE SIGNAL and AMATEUR NIGHT, the short on which this film was based)?
GB:  David was very involved as a producer and as a collaborator, so much that I had him shoot second unit. It was a wonderful experience.