Earlier this year, I had the chance to check out KILLER RACK, and walked away in love with the movie. A funny, bloody good time is the best way to describe it off-hand, and the director, Gregory Lamberson, along with the voice of the killer rack herself, Brooke Lewi,s took a few moments out of their busy schedules to answer some questions from a fan. If you haven’t checked out KILLER RACK, you can check it out digitally now, along with a physical copy coming later in December, I highly recommend it!

Daily Grindhouse:  So to start things off I have to ask, where did the idea for KILLER RACK come from? The idea of genital based body horror isn’t unheard of, we’ve had movies like TEETH in the past, but to have it be sort of a romantic comedy is a huge change from the various forms of darker gross out takes on the genre.

Gregory Lamberson: The idea was Paul McGinnis’s, the screenwriter.  He was at a party, and someone else came up with the title, and a few people joked about a story about a woman with large breasts killing people.  Paul said, “No, with that title, it has to be about monster boobs that kill people.  That’s the movie I want to see.”  So he wrote it.  I had some pretty vicious looking succubus boobs in DRY BONES.  At the time I thought, “Ultimate boob gag!”  Then Paul showed me his script. 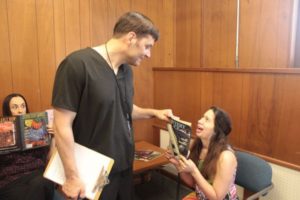 DG:  Did you all have any sort of fear regarding people’s response to the film before actually seeing it and the positive message it has? Especially considering how people are much more vocal about body image nowadays.

GL:  No. It’s a great title, and the movie is about body image.  Some people will condemn it without seeing it, but those who see it will realize the film makes fun of the way men and women objectify women, and its theme is that you shouldn’t change your body image.  That would have been too long for a title.  Look, it’s a goofy comedy, but one aimed at the horror crowd.  If they can’t figure out the film’s tone from the trailer, or from any of the video reviews posted, I don’t know what to tell them.  It’s all pretty saccharin to me.

DG:  This one is for Brooke, what was your immediate thought when asked to provide the voice for a killer pair of breasts? 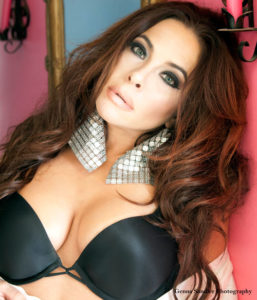 Brooke Lewis:  Honestly, I thought Greg had lost his mind! LOL! And, I will tell you, had almost any other director asked me to do a film titled “Killer Rack” and the voice of the “Boobs”, I would have said “No”, but knowing Greg the way I do, artistically, and having worked with him on SLIME CITY MASSACRE, I was more than open to listen without judgement or preconceived notions. I remember Greg saying, “I am directing this guy, Paul’s, screenplay. It is as if I wrote it and it is not what you think it is!” Knowing how Greg’s crazy creative mind works, I said, “Send me the script!” I read it and was hooked like a bra (wink)! The script was original, silly, hilarious, funny and CLEVER! I was not at all surprised, as I know a Greg Lamberson film will always have meaningful subtext and messages. Greg knows how much I speak about Female Empowerment and Life Coach women on TV about body image and self-esteem, so he knew he had me! Plus, add Debbie Rochon to the mix and he knows he has me! We had several discussions about creating the VO character and his vision to uphold a Mae West (one of my icons!) type of voice and attitude that would deliver the message that women can be sexy and powerful and create world-domination…Oh wait, I may be confusing my perception with that of the ‘Killer Rack’ there! KIDDING… kinda! (wink) 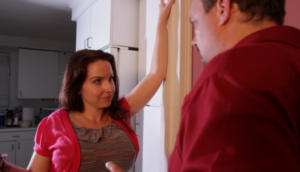 DG:  The end of the film leaves the door open for a sequel featuring a new killer piece of anatomy, would their be any interest in pursuing that in the future? Or maybe just more of the hilarious Dr. Thulhu and her assistant?

GL: Not me, but Paul is welcome to make that movie.  I had a blast making the film, and I’m really proud of it, and I loved working with everyone involved.  But I don’t plan to devote two years of my life to a sequel unless someone says, “Here’s 100 grand, make another one and this time pay everybody – including yourself.”  I know Paul has a bunch of scenes in mind for a sequel, and a funny concept that does _not_ pick up from that funny scene at the end.  We’ll just have to wait and see what happens.  If our investors don’t make their money back, no sequel.

DG:  What was the most difficult part of the movie to film?

GL:  Scheduling all those actors.  It’s a huge cast, and Debbie, Lloyd, Roy Frumkes, and Michael Thurber were all from out of town. We shot on weekends, so it sort of went on and on.  The boobs were hard too, even when they were hidden by clothing.

DG:  KILLER RACK felt like it had no limits in terms of how ridiculous it would get, were there any ideas or scenes that had to be cut due to limitations?

GL:  Nope.  Our attitude was that we would try anything and go for broke, and Paul was protective over his jokes.  We ended up trimming- extensively – the hot tub scene, because it went on for pages without advancing the story, but that’s it.  There was no self censorship.  The original script actually had a lot of the killer boobs off-screen, and when I came on board, Paul and I worked out a more graphic climax, the one you see now, which I honestly think is pretty fantastic.

Thanks  to Greg and Brooke for the interview, along with the whole cast and crew of the film for bringing us something I feel will prove to be considered a great cult classic for years to come.

KILLER RACK is available to stream right now, with a DVD release on December 13th along with the SLIME CITY/SLIME CITY MASSACRE DOUBLE FEATURE Blu-Ray. Just in time for the holidays!