Home  ⁄  The Wire  ⁄  [EDITORIAL] IT Is A Rare Phenomenon For Film Lovers, So Take A Step Back And Enjoy It

IT is a hit. The Stephen King adaption had the biggest opening of all time for a horror film with a take of $123.1 million. IT really is a wonderful film that plays like the best NIGHTMARE ON ELM STREET film since NEW NIGHTMARE and provides a deft blend of scares, comedy, and heart.

A phenomenon like IT is a rare and welcome thing. The last time I remember audiences flocking to a film in droves was the original GUARDIANS OF THE GALAXY. I was tending bar and taking tables that weekend and every other guest that came into the restaurant was coming from or going to James Gunn’s fun bit of Lucasploitation…

And everyone was loving it. People were leaving the theater eager to talk about a film that they dug. As much as I love watching movies, I really love going to the movies. While you are sitting in a dark room in relative silence for two-hours, there is a social quality to it. It’s an event.

Several years before that, I attended a midnight screening of THE DARK KNIGHT at my local AMC. That place felt more like an oversold rock concert than the opening night of a comic book flick. The crowd was wall to wall and the theater ended up screening the film round the clock to keep up with demand. In the summer of 1999, I was in the pocket, eagerly anticipating the release of THE PHANTOM MENACE and saw an out of nowhere horror film phenomenon with August’s THE BLAIR WITCH PROJECT, a film that had suburban audiences lining up around the block like it was New York in the ’70s. 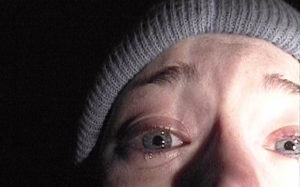 I love when this happens, when a film is on the tip of everyone’s tongue and there’s an electricity surrounding it. It’s exciting. But that electricity is fleeting, and as film lovers, we need to embrace this and appreciate it in the moment. 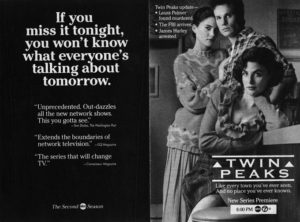 The era of binge watching and streaming has all but killed the water cooler notion of film and television. In 1990, co-workers would gather around the break table to discuss what happened on that week’s Twin Peaks: the conversation buzzing, friendships being formed, everybody wondering “Who killed Laura Palmer?”  These days, you’d be more prone to seeing a grown person cover their ears, running from the room because they’re so afraid of spoilers and they “haven’t caught up yet” or even worse, are waiting to binge it.  There is so much “content” out there to take in, its rare that audiences as a whole are ever in tune to the same thing. Some viewers are watching Game Of Thrones religiously, some are into Ozark, and someone’s even tuning into Crackle’s original programing. Even as someone who writes about television and film, I don’t know how anyone keeps up with all this stuff. Movies are no different. We’ve all wasted at least a half hour of time scrolling through Amazon Prime, Netflix, Hulu, and Shudder looking for a film to settle into for the night, usually before settling on some comfort food that you’ve seen umpteenth times. This is no longer the days of 4 channels on neighborhood video store. We as audiences arguably have TOO many choices.

It was easier for a film to become a phenomenon in the past. In 1975, you couldn’t simply wait four months for JAWS to come to home video: you had to get out and see it right now before it got pulled from theaters. Then your only chance was a revival showing or a major re-release. This put butts in the seats and placed the film squarely in the zeitgeist. As a life long film lover, I’ve always been fascinated with the time and place surrounding a film’s release, be it the lines around the block for STAR WARS or people passing out at screenings of THE EXORCIST. In speaking to older friends and family, it’s wonderful to hear stories about where they saw PURPLE RAIN for the first time or asking them exactly how massive the  CROCODILE DUNDEE fad was in 1987. In the fictional world of Mad Men, Roger Sterling discussed PSYCHO with Joan Holloway, there was a pitch based around ROSEMARY’S BABY, and Don Draper sat down for two consecutive showings of PLANET OF THE APES with his son Bobby. I always wonder to myself about these films that I missed upon their original release, “What was it like to be there?”

And I’m there right now. There is an abundance of excitement about IT. Being active on social media as well as  being a film writer, there are plenty of releases that have a moment amongst movie lovers and critics alike. Well regarded genre flicks such as GREEN ROOM and THE WITCH come to mind. Even an event as big as the Academy Awards, the average filmgoer isn’t necessarily rushing out to JACKIE, MOONLIGHT, or LA LA LAND. IT is bigger than that: it is top notch populist entertainment. IT doesn’t just appeal to audiences that attend midnight screenings at the Alamo Drafthouse, the New Beverly, or Chicago’s Music Box Theater. That crowd adores the film, sure, but gen pop is excited about IT as well. Working the bar tonight, everyone was buzzing about IT.

To truly be a phenomenon, a film has to be lauded not only by critics, and hardcore cinephiles, but the average moviegoer a well—yes, even the dopes who check their phone in the theater. IT has done that. IT is a very special film: absolutely a horror movie, IT will not only appeals not only to longtime DAILY GRINDHOUSE readers—fans who grew up on a steady diet of Fangoria, Stephen King novels, and FRIDAY THE 13th—but also to the average Jane and Joe that don’t refer to the movie theater as “their church.” For these audiences, going to the movies is simply something to do, but everyone wants to see something good, maybe even great. It’s expensive going to the show these days without the bar tab.

There’s also no way of knowing in advance where a film is going to connect. IT is a film that’s very of the moment: chock full of ’80s nostalgia (and certainly getting some runoff from the cult of Stranger Things), creepy clowns, and something—that while certainly populist entertainment—is a far cry from STAR WARS and the Marvel cinematic universe, and written by one of the best selling authors of all time. Even if you’ve never read a Stephen King book, you know that he’s good at what he does (except endings sometimes). IT transcends genre similar to the way THE DARK KNIGHT transcended comic book movies and STAR WARS was more than cheesy sci-fi while also checking all the boxes and very much being “a horror movie.” Horror sells. Sam Raimi and company made THE EVIL DEAD because they knew that there would be a return on investment for a horror film. That said, even people who “don’t like horror” are going to check IT out. It’s the kind of movie that people will go see simply because they have to see what all the hype is about (my mother would have never seen STAR WARS if not for that very reason).

There’s a lot of chatter about whether IT is perfect, or an all timer, or just a pretty O.K. movie. There’s even some film goers that don’t believe that it’s a horror film. (Just ask yourself, if you owned a video store, what section would you put IT in?) There will be years to debate that. It’s fun to talk about film, sometimes its’ more fun to argue about film. But for now, let’s all appreciate that as film lovers, we are experiencing something truly special, because it is fleeting. Life moves fast and in two weeks or so, something else will be the talk of the town.

Tags: Guardians of the Galaxy, It, Jaws, planet of the apes, Purple Rein, star wars, Stephen King, The Blair Witch, The Exorcist, The Phantom Menace