Other Titles: EMISSARY OF TERROR 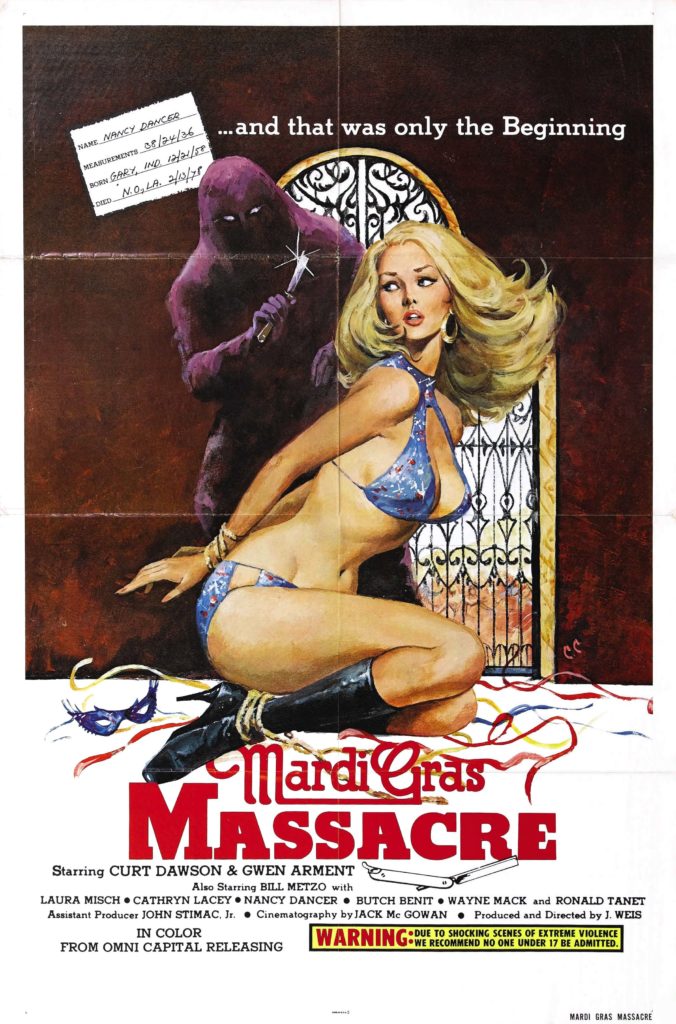 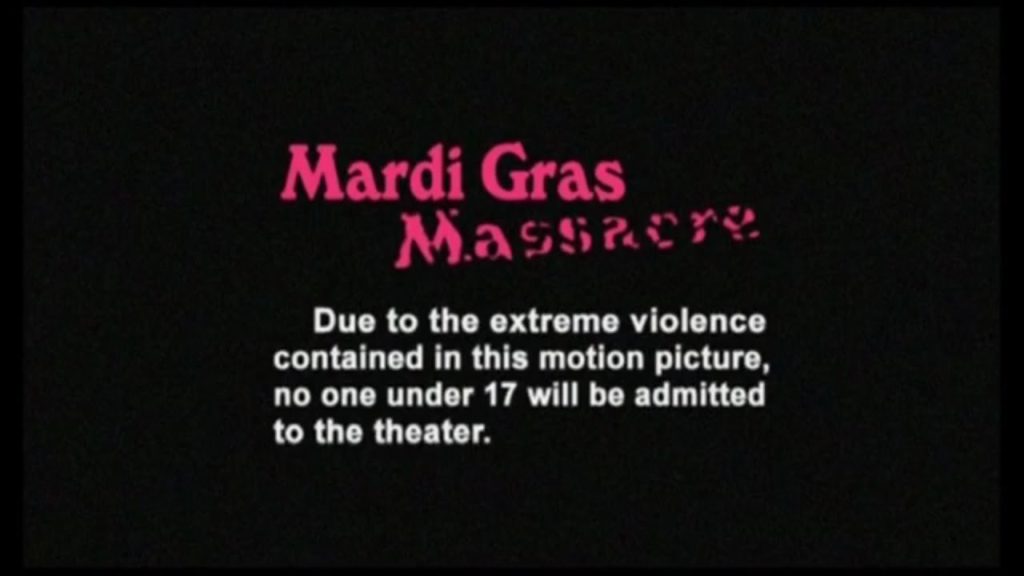 MARDI GRAS MASSACRE has a masked killer descending upon the streets of New Orleans during Mardi Gras, mutilating and sacrificing prostitutes to an ancient deity. If that sounds eerily close to BLOOD FEAST, that’s because it is. The entire concept for this movie is lifted from Herschell Gordon Lewis’ splatterfest cult classic.

The opening scene has a mysterious brooding gentleman named John (who fancies himself an Aztec high priest) strolling into a bar and inquiring as to where he can find the “most evil” prostitute he can hire. After finding such a woman and bringing her to his downtown apartment, she undresses and lies upon a table at his request, while he throws on a robe and an EYES WIDE SHUT-esque metal mask. He ties her down, cuts her up, puts her heart on an altar, and sings the praises of Coatla, a Peruvian goddess. This exact scene happens twice more, intercut with bumbling cops looking for John, and that’s it. That’s the movie.

Jack Weis’ effort emulates its gory predecessor on every level. From the laughably bad dialogue to even worse delivery from the entire cast to the jumpy editing, there is nothing critically redeemable about this film. To be fair, BLOOD FEAST is no cinematic masterpiece, either. But the 1963 original had an appeal in its trashiness that MARDI GRAS MASSACRE simply doesn’t contain.

Within the charismatic failure of MARDI GRAS MASSACRE lies a single success: that of William Metzo’s dedicated performance as the killer, John. Channeling WHITE ZOMBIE—era Bela Lugosi with the intensity of character that made BLOOD FEAST’s Fuad Ramses such a campy delight, Metzo furrows his brows and just goes for it. It’s all done to the soundtrack of Dennis Coffey’s overwhelming disco music that distracts more than it pleases.

While Metzo’s deadpan delivery as the villain of the film makes certain scenes worthwhile, the overall ideas of MARDI GRAS MASSACRE are maintained without so much as a wink at the audience, and takes itself too seriously in its badness to be a gratifying successor to the film it apes. Simply being a bad movie isn’t enough; I’m reminded of Susan Sontag’s Notes On Camp:

“Camp doesn’t reverse things. It doesn’t argue that the good is bad, or the bad is good. What it does is to offer for art (and life) a different — a supplementary — set of standards.”

Within the standards that the likes of Susan Sontag and John Waters have set for trash cinema, it’s not enough to simply mimic a film or an aesthetic. There has to be a fair amount of entertainment value present in its dreadfulness. Beyond the over-the-top villain and a blink-and-you’ll-miss-him bebopping character named “The Fish” who can procure whatever his clients need, all we have to look toward are the elements (dialogue, acting, production value, bloodshed) that BLOOD FEAST had already done the same, or better. 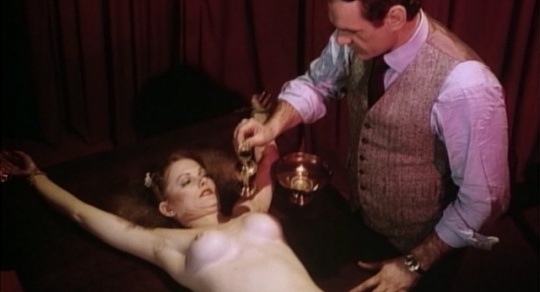 The first 15 minutes has the high priest John ritualistically slicing up a prostitute onscreen. After teasing her with an oily massage (with full-frontal nipple pinching), Weis teases the audience with a hand piercing and a heel slit before delivering a bloody payoff with a two-handed jagged slice up the victim’s abdomen, reaching in and pulling out her heart to place on the altar. As wonky as the effects are throughout the movie, it’s the thought that counts. Unfortunately, this exact mutilation is repeated a handful of times throughout the movie, and that’s all MARDI GRAS MASSACRE has to offer for envelope-pushing vulgarity. To his credit, special effects designer Michael Nahay uses different (albeit obvious) dummy pieces for each sacrifice scene. The sequences are such replicas of each other that I had to replay the previous ritual scenes to compare the perkiness of fake latex nipples for confirmation that Weis didn’t just recycle previous footage of the dagger penetrating skin.

As a bonus, keep an eye out for 1970s Playboy pin-up Laura Misch, who has a role as one of John’s screaming victims. 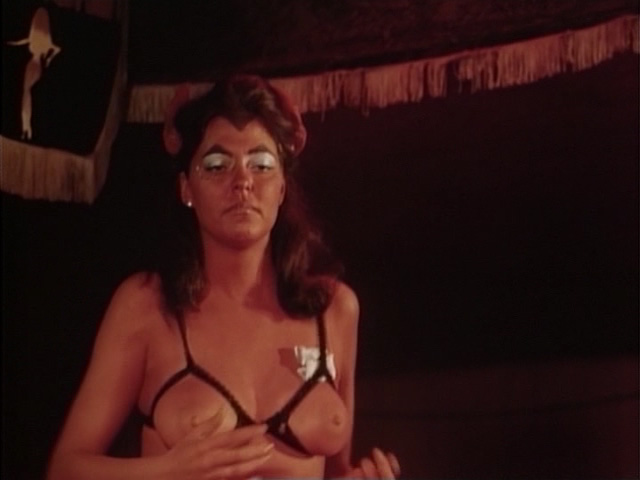 MARDI GRAS MASSACRE’s slice-and-dice violence didn’t sit kindly with the BBFC, who slapped both uncut releases (by Goldstar Video and Market Video) with prosecution under the Obscene Publications Act, effectively banning the distribution and sale of the film. No one has bothered to resubmit the movie for BBFC certification since then, but Code Red released an uncut DVD in September 2011.

As a petty aside, MARDI GRAS MASSACRE suffers from one of the most boring taglines of the Video Nasties list entire: 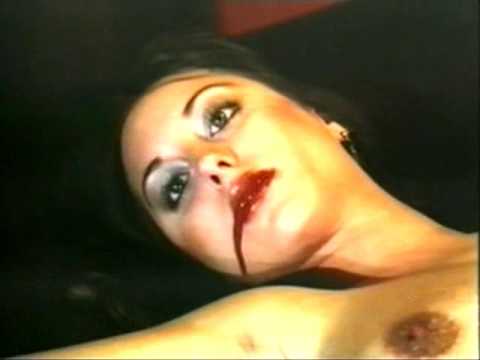 While MARDI GRAS MASSACRE isn’t all that conceptually different from BLOOD FEAST, it’s missing that so-bad-its-good magic that thrilled audiences nearly two decades prior. Sometimes movies are good because they are awful, but this is not one of those instances. There’s neither enough vulgarity to appreciate nor campiness to enjoy. For a fun update to the original BLOOD FEAST, hit up BLOOD DINER instead.