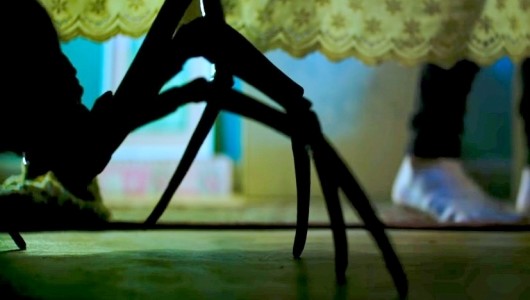 As the opening credits for ITSY BITSY roll we see imagery of a dark, sorcerous ritual intercut with extreme close-ups of a spider. The ritual is obviously tied to the arachnid, as it all looks pretty “spidery.” Soon after, those participating in the ritual lie dead and a jeep full of bad men speeds away from that foreign land with a relic from the ritual: a clay pot painted black and covered in magical markings.

Back in America, young single mom Kara (Elizabeth Roberts) drives through the night with her two children to a new job and what she hopes will be a new start for her family after some terrible event in their past. Arriving at their new home, Kara introduces her kids to Walter (the great Bruce Davison) and the house they will be living in on Walter’s land. Walter needs nursing care and Kara is signing on to take care of him as he pursues his passion of collecting antiquities–such as the clay pot painted black that was recently delivered to him.

Ahkeeba (Treva Etienne), one of the bad men from the jeep, is hanging around, and seems loath to let go of the clay pot. After his business relationship with Walter sours, things go south. The clay pot is broken and a wounded Ahkeeba heads for the hills. In the turmoil, no one notices what was inside the clay pot or that it unfolded itself from some kind of cocoon and skittered up into the dark corners of the house. Although there was some kind of magic involved in its origin, a very real creature is alive and lurking in the house now. Even worse, it has compound eyes, eight legs, and is the size of a dachshund. Fear has woven its web around Kara and her family. Be careful checking under the bed, you might not like what you find under there. 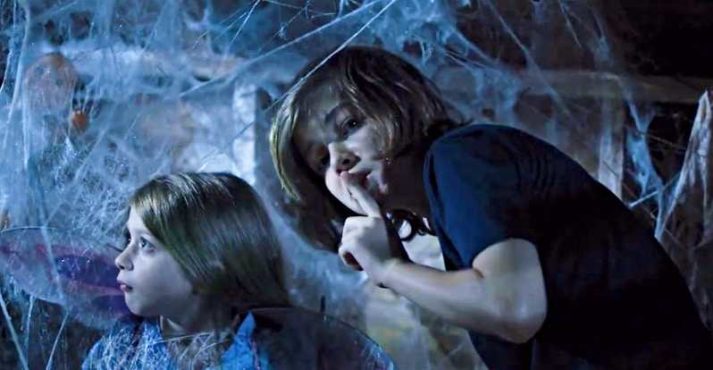 Of course it is a big ass spider running around in the movie and I am delighted to say that it is brought to life with a nearly perfect mix of practical effects with some CGI. Director Micah Gallo started out in visual effects, providing them for movies like Adam Green’s HATCHET and Ti West’s THE INNKEEPERS. For his directorial debut, he teamed with two other writers to put together the screenplay for ITSY BITSY, and then sat down in the director’s chair. The movie was at least partially crowdfunded and it looks very good considering what the budget likely was. The spider is the exact size to send mild chills up this slight arachnophobe’s spine right from the get go. Up to a tarantula in size and bigger than a car – I’m okay with. But show me a spider from the size of a dinner plate to a coffee table – and I get the heebie jeebies. The creepy crawly in ITSY BITSY is right there in that sweet fear spot.

The acting is fine, with vets Davison (one of my favorite character actors, spicing up creature features starting with WILLARD in 1971) and Denise Crosby adding a lot to the proceedings (Crosby’s Sheriff role is smallish, but it’s nice to see her, even if she doesn’t get to do a whole lot of “sheriffish” stuff). Everyone from Roberts and the two child actors (Arman Darbo, Chloe Perrin) who carry the bulk of the movie to the actors in the smaller roles do well. Horror fans can watch for a quick cameo from Eileen Dietz–most famous as the “subliminal demon face” used in super fast cuts in THE EXORCIST by director William Friedkin to provoke a nervous reaction in viewers. 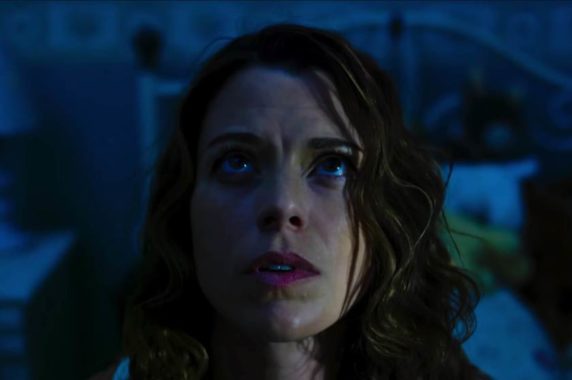 The script tries for a lot, starting with that ritual and continuing through the trauma that has upended Kara’s life, which is then mixed in with the scary stuff with the spider. I feel like the spider stuff is the more successful side of the screenplay and I wish there had been more of it. When the drama is mostly jettisoned in the last twenty to thirty minutes, as the family has to escape from or fight the arachnid intruder, the movie starts to really hum. Director Gallo does a terrific job keeping the suspense during this stretch at a high pitch. I wish that could have started a half hour earlier and that the somewhat mushy middle section when Kara is not being a very good nurse and Sheriff Dunne is having awkward chats with her in the local diner would have been shortened or thrown out altogether.

Still, the mostly practical effects and that last half hour do just garner this a recommendation for creature feature fans. These filmmakers were able to achieve a lot with less than optimal resources, and for that they should be applauded.

The ITSY BITSY Blu-ray from Scream Factory is well produced and has a full plate of special features. The picture and sound are exemplary, but then this is a brand new digital feature, so there’s no reason it shouldn’t be. The colors are bright and there’s not too much blue or green tone as so much modern horror has. The blacks are crisp in the darker scenes, and those darker scenes are well lit. The sound is well mixed and balanced. Also, on the sound side there are two commentaries: one a solo effort from Gallo speaking as the film’s director and visual effects consultant; the second a full length track with Gallo now speaking as the film’s writer along with his co-writers J. Bryan Dick and Jason Alvino. Both were interesting, though there is enough extraneous material in both that they might have been combined into one. I was surprised to hear Gallo admit that the credits sequence with the ritual and spider close-ups did not open the story as he hoped it would–ending up somewhat confusing–which I agreed with. 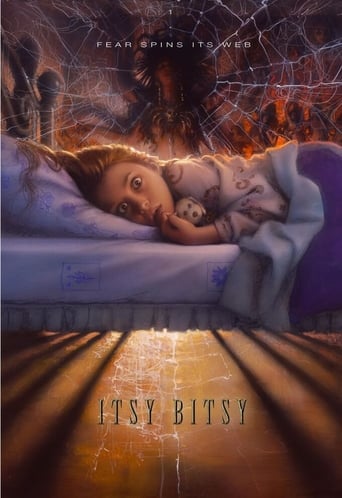 Also included are several featurettes generally running 2-3 minutes each with a look behind the scenes. There is a comic piece with obnoxious comedian Andy Dick “screen testing” to play the spider that was pretty funny, but thankfully just as short as the other clips or else he would have worn out his welcome if it had gone on much longer. An extensive 30-minute storyboard gallery and two trailers round out the special features.

If you’re looking for some creepy crawly horror this Halloween season, I would say this not-so-ITSY BITSY spider might be a safe bet.