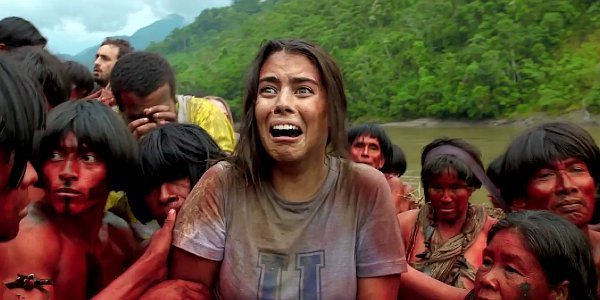 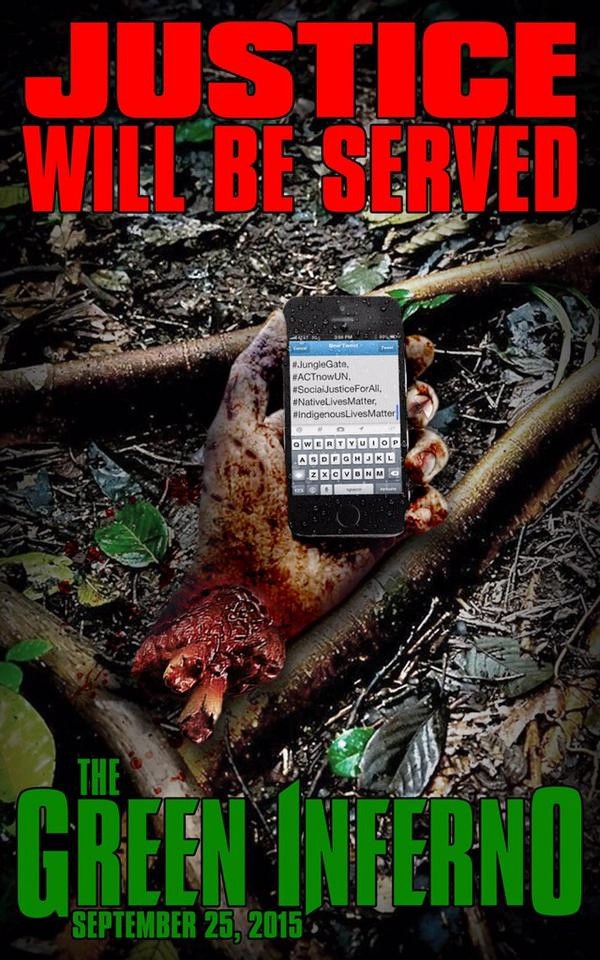 n 2010, a remake of Meir Zarchi’s notorious rape-revenge film I SPIT ON YOUR GRAVE (1978) was given a limited theatrical release in U.S. theaters. The idea of remaking one of the most iconic grindhouse films of the ‘70s was already an iffy proposition, but the most offensive thing about the 2010 I SPIT ON YOUR GRAVE is that it was an attempt at making a commercial version of a rape-revenge movie.

The production values are higher than the grimy 1978 film, and its heroine’s revenge was taken in ways that clearly owed a debt to the box-office success of the SAW series. The original film, is brutal, nasty, and blatantly confrontational. The remake basically just gives the same subject matter a Platinum Dunes gloss and is, by definition, grossly exploitative of its reprehensible subject matter.

Eli Roth’s THE GREEN INFERNO (2015), while not a remake of a specific “cannibal” film, makes the same fundamental miscalculation. The original films Roth references here— including Ruggero Deodato’s 1980 CANNIBAL HOLOCAUST, from which the title of Roth’s film is taken?—?were pitched to appeal to the most prurient interests of their audiences.

These films featured protracted scenes of gruesome violence against humans (sometimes very convincingly faked) and animals (sometimes, disturbingly, not faked), and they frequently depicted female characters being raped. These were films designed specifically to put people in theater seats by being as stomach-turning as possible. These filmmakers were not working within the constraints of the MPAA rating system.

But Roth most definitely is working within industry constraints. He was at the helm of a film production with a budget probably around seven figures. In order to get his film distributed in multiplexes across the country, he would have had to deliver an R-rated film.

While there is plenty of blood and gore in THE GREEN INFERNO, it never comes anywhere close to the level of leering cruelty of the films that inspired it. Roth removes animal killing and rape from the equation in addition to cutting down images of human characters’ being dismembered to an absolute minimum. The centerpiece scene that has inspired the most discussion is primarily constructed of gore shots that last fractions of a second.

In other words, Roth has basically removed the entire raison d’être of the Italian cannibal film. THE GREEN INFERNO is a toothless replica of a small subgenre of exploitation films that offers viewers a watered-down version of the uncomfortable “thrills” of those movies.

Additionally, shooting his movie on digital video robs Roth of even the aesthetic pleasures of the Italian cannibal movies. Digital video is fine for close-ups and medium shots, but in its wide shots and especially flyover footage of the jungle, it gives a smeary approximation of the beautiful cinematography of the best of his inspirations.

So, then, what really is the point of THE GREEN INFERNO?

In an interview with Meredith Woerner for the Los Angeles Times, Roth suggests THE GREEN INFERNO is a reaction to so-called “Twitter activism” and SJW (social justice warrior) culture: “Are people retweeting things because they think it’s important or because they want everyone to think that they’re a caring person?” But he does not seem to realize his depiction of the young characters in his own film does not align with his image of them as people who care about a cause but not “enough to inconvenience their own lives.”

The two main characters whose sides of the story are presented inTHE GREEN INFERNO are Alejandro, the leader of the protest group, and Justine, a young woman who joins them on their trip to Peru for the demonstration. In an early scene, Alejandro learns that Justine’s father works for the United Nations, and he recruits her specifically for this demonstration, which he is using as a publicity stunt. It is never specifically mentioned, but it is implied that only Alejandro, his girlfriend Kara, and the group’s financial backer Carlos (who works for a corporation competing with the one threatening the tribe for rights to exploit their land) were aware of this plan. Alejandro intentionally places Justine in danger to increase the demonstration’s potential for gaining attention.

For Justine and the other students, however, there is nothing to suggest that their commitment to this cause is anything but genuine. This seems particularly true of Justine, who is spurred to action when she learns about female genital mutilation in one of her classes. She’s willing to get on a plane, fly to South America, take a long boat ride and trek through the jungle, chain herself to a tree, and have a machine gun pointed in her face in order to stop the destruction of the isolated native tribe that ends up capturing her after the protestors’ plane crashes. This is a long way from just re-tweeting a link or posting an Ice Bucket Challenge video.

During the protest itself, all of the students wear blank white masks to hide their identities. They’re told that this is because the action is not about the individual, but about the cause. Again, this undermines Roth’s stated intent as discussed in an interview with Bloody Disgusting: “I think that social media is an amazing tool. But you see, the kids in THE GREEN INFERNO, it’s not that they care about saving the rainforest; they care about being recognized for caring.”

If the intent behind the demonstration was to draw attention to deforestation and the killing of villages full of people standing in the way of corporate profits, of course the students are going to be excited they’ve gotten major social media coverage. That’s the entire reason they flew to a remote spot in the jungle instead of hanging out in their dorm rooms and hoping to get some “shares” and “likes” for posting links about it. The video they took to raise awareness only shows Justine’s face thanks to Alejandro’s scheme; she’s not happy or excited at all when everyone else is celebrating their success because she’s justifiably angry at being used and manipulated.

Alejandro took the money from Carlos to stage the protest as a publicity stunt to get more people interested in joining the group. His behavior doesfall in line with Roth’s complaints: Alejandro is using the protest as a means to gain glory and attention for his group. While he may assert that he took the payoff in order to make the group larger and more powerful, and thus more able to cause real change, the problem is that he was willing to make a massive ethical compromise to further that goal. Alejandro’s priorities are not actually in helping people, but feeding his own ego.

It’s ironic, then, that the only characters who survive the trip to Peru are Justine and Alejandro. It makes sense that Justine would survive if Roth wanted us to align our sympathies with her, even if he doesn’t seem to acknowledge a difference between her and Alejandro. And this, ultimately, is one of the things that makes THE GREEN INFERNO so frustrating.

The three characters who most fit the description of what Roth is supposedly railing against in the film?—?social media activism?—?are Alejandro, Kara, and Carlos. Carlos dies in the plane crash and Kara is killed shortly thereafter when she takes a spear to the neck and an arrow to the head. Their deaths are relatively quick, and Alejandro doesn’t even appear to sustain any injuries in the plane crash and is never otherwise harmed.

Meanwhile, the other students have their eyes gouged out, their limbs chopped off, their bodies cooked in an oven, and their tattoos removed as playthings for the tribe’s children. One of them cuts her own throat in despair. Another is eaten alive in a scene played for comic effect because the people of the tribe get “the munchies” after eating a corpse with a baggie of marijuana shoved down its throat, and the last is strung up and covered with (highly unconvincing CGI) ants before one of the tribe’s children mercifully slits his throat. The threat of genital mutilation looms over Justine the entire film, and she is being prepped for it when the private army guarding the deforestation crew finally nears the village.

In short, the people who most represent what frustrates and angers Roth about “slacktivism” are the ones who get off easiest. This goes directly against what Roth claims the film is really about. Judging by the fate of these kids, Roth’s sympathies are more with the man who is honest about being willing to make ethical compromises in service of his own ego than with the earnest people whom he manipulates and places in danger by using their own genuine social concern and willingness to engage in direct action. The message of THE GREEN INFERNO, then, seems to be summed up by Justine’s disgusted roommate during the film’s opening act: “activism is so fucking gay.”

Eli Roth has been a divisive figure in the horror community ever since his debut with CABIN FEVER (2002). While it is obvious he is a knowledgeable fan of horror and exploitation cinema, it is less clear in the case of THE GREEN INFERNO whether or not he understands that in making an R-rated cannibal movie, he has removed almost everything that made those films noteworthy.

Further, Roth’s distaste for activism?—?whether it’s online or in person?—?gives the film a mean-spirited tone that condemns people for giving a damn about anything. This sort of juvenile attitude is what people who condemn genre cinema use as ammunition when arguing it is not worth serious consideration.

Roth may have thought he was presenting a coherent argument against lazy, vainglorious “slacktivism,” but his misguided approach overshoots the mark and comes across as smug superiority. This more than anything else is what really makes THE GREEN INFERNO such torture to watch.