It somehow flew underneath my radar. Though it started in May of 2007, I didn’t find it until sometime in 2008. I don’t remember my first trailer, but I remember the habit forming commentary from the many gurus of cinema that populate the site. The brainchild of one of my favorite directors, Mr. Joe Dante, Trailers From Hell is a daily stop for me, the place I go when I have a pause between postings, a few moments to spare between films. It is pure, unadulterated, 100% independent, geek crack, but it needs your help, and it just launched a Kickstarter campaign to get it.

Last night it was reported that in order for Trailersfromhell.com to continue, it needed to raise some funds to pay for “cost of preparing, shooting and editing the trailer commentaries, creating the original art for the site and to cover web-programming and server management expenses.” Done and done. The goal is small (it’s only $30,000), but the payoff is huge; you can pick your signed swag which depends on your donation level.

These trailers are three minute knowledge bombs. The best and worst of cinema are always on equal ground. Grindhouse with true Hollywood classics. Harryhausen next to Coppola, Howard Hawks next to Jack Hill, dogs and cats living together, mass hysteria. Schools in session, but to have another semester it needs your help. Drop some coin; help a group of gurus out. Just look at the swag list! Are you telling me you DON’T want a signed Joe Dante MANT poster? Hit the kickstarter page today and show the men and women of Trailers From Hell some love via the benjamins in your bank account. Future film nerds need this site, and so do you. 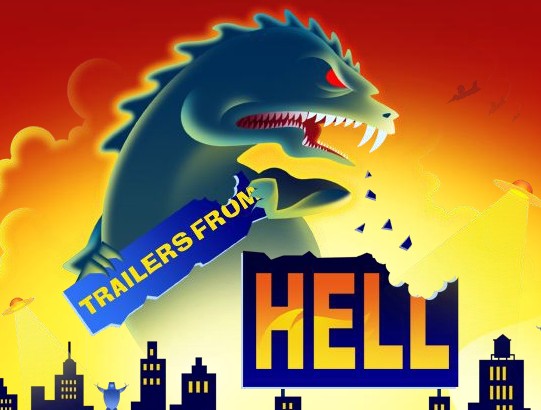