Joseph Ziemba has been maintaining the excellent Bleeding Skull website since 2005, compiling an amazing array of reviews of VHS obscurities that would otherwise be forgotten to time..  Last year, the site made the jump to print with the amazing book BLEEDING SKULL! A 1980s TRASH HORROR ODYSSEY, and he’s spent the past several months touring on a promotional campaign with the book along with Chester Novell Turner, the newly-rediscovered auteur behind BLACK DEVIL DOLL FROM HELL and TALES FROM THE QUADEAD ZONE.

This Saturday, in association with “Everything is Terrible,” Ziemba, Turner and Dan Budnik will be appearing at Lincoln Hall in Turner’s home of Chicago for a screening of TALES FROM THE QUADEAD ZONE.  (Click here for tickets, and here for the Facebook event page.)  We had a chance to talk to Ziemba via e-mail about the book, the tour, and what the hell digging into the depths of trash horror is all about. 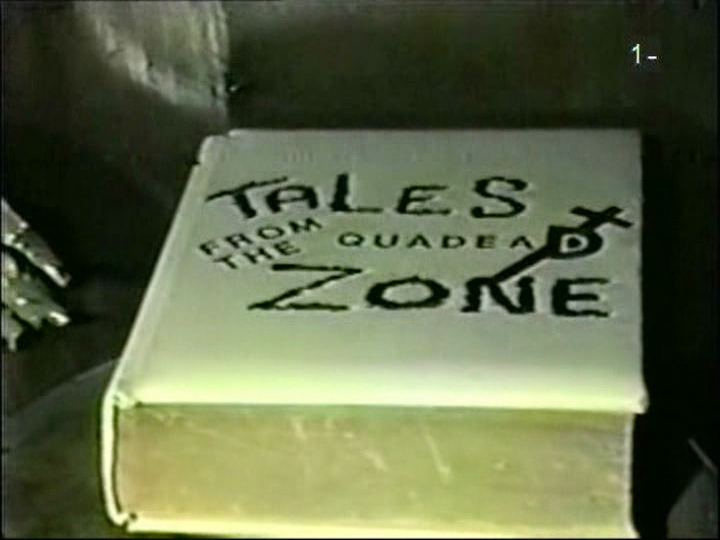 DG: How has reaction been to the book tour?

Z: Nothing but positive. We’ve met so many kind and enthusiastic people at the shows. I’ve been overwhelmed by the positivity and enthusiasm. Hanging out and talking with people about these movies before and after each show was one of the unexpected highlights of my year.

DG: Out of curiosity, what’s the last thing you watched?

Z: THE OFFICE: SEASON 9. Annie and I watched it from start to finish in five days. It made me tear up more than once.

DG: How old were you when you started frequenting video stores?

Z: I was six. My first video store experience was a place called “The Video Store” in Chicago Heights, IL. My dad would take me every weekend. We’d listen to J. Geils Band and Mothers Of Invention and The Monkees on the way there. And we’d rent tapes. Tons of them. The Video Store had a whole room dedicated to horror and the cover for VHS of THE TOWN THAT DREADED SUNDOWN gave me nightmares.

DG: When did you start writing about the stuff you were watching?

Z: Late 2003. I did it on a whim while battling the flu and reading Steven Puchalski’s SLIMETIME. That book was my direct inspiration.

DG: Did you pick up cult film mags as a kid? Psychotronic, Shock Cinema, that kind of thing?

Z: I got into Psychotronic and Shock Cinema in college. I had a subscription to Shock for a long time. There wasn’t much before that. I hated Famous Monsters as a kid. My parents wouldn’t let me buy Fangoria or Gorezone. But I managed to build up a collection of Fangorias and Gorezones without them knowing about it.

DG: What kind of perspective do you have on writing about movies that were clearly not meant for mainstream audiences? How do consider the audience for these movies when you write about them?

Z: I don’t over-think it in terms of who these movies were made for. I don’t care. I consider the audience for Bleeding Skull to be intelligent, adventurous, and dedicated. So that’s my mindset when I write. I’m writing for my friends, people I’d like to hang out with. The site is a safe place for people who are passionate about these movies. There’s no bullshit, no ulterior motives, and there never will be.

DG: How did you hook up with Dan Budnik?

Z: Dan and I developed our friendship via email in 2006. The first email that Dan sent me started with this: “I really like the site. We have similar tastes in movies.” From there, we discovered a mutual appreciation for Chris from THE LAST SLUMBER PARTY, Bobby Bittman, and people at work who say things like, “This day makes my ass itch.” He started contributing to the site and we met face-to-face when my band was touring through Los Angeles. I moved from Chicago to LA for a few years beginning in 2009. That really solidified our friendship and working partnership. 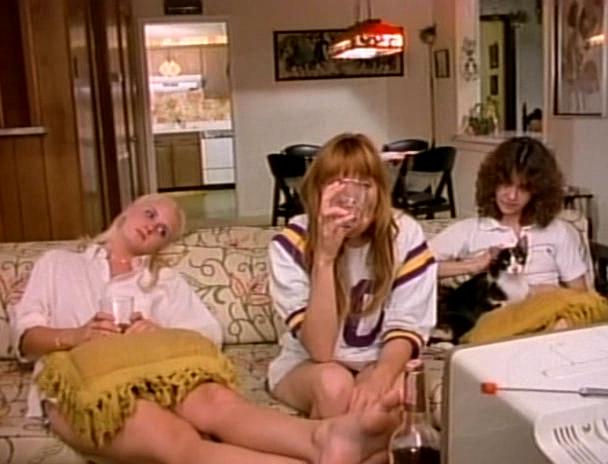 DG: How did you meet Annie Choi, who seems to share your love for trash films?

Z: I met Annie almost four years ago at a screening of PLAYTIME in LA. We were both there with different sets of mutual friends. After about two minutes, I was taken with her — she was the funniest and most intelligent person I’d met in a long time. We were both in relationships at the time, so I pretty much forgot about it. One year later, the same thing happened randomly at another screening. This time, we became friends after bonding over drinks and BURIAL GROUND. We started writing music together and it became obvious to both of us that something was developing. So we decided to be together. Since then, our relationship has improved many aspects of my life. Annie taught me a lot about writing and the creative process. She taught me about strength and trust. And she taught me that I should embrace Bleeding Skull with everything I’ve got and never look back. I’m grateful for what we have.

DG: What about Zack Carlson? How did you get involved with the Alamo Drafthouse?

Z: I owe a lot to Zack. He first contacted me via email in 2009. He liked what was happening on Bleeding Skull and we bonded over THE LAST OF THE AMERICAN HOBOES. I soon found out that Zack was a force of nature creatively, and also an incredible person. We became friends quickly. I’ve never met anyone like Zack. He’s a special person, one who sets the bar for the rest of us. I’m glad we’re pals. Currently, I’m an art director and film programmer at the Alamo Drafthouse in Austin. And I love it. That’s thanks to Zack. He called me out of the blue one day and asked if I’d be interested in moving to Austin and working at the Drafthouse. A year and a half later, I was here.

DG: Where did the idea to do a book come from?

Z: In 2006, I worked out an idea for a Bleeding Skull book that wasn’t very interesting. Then I forgot about it because there were a million other things going on at the time. In 2009, I received a random letter in the mail from a man in Germany. The letter said: “If you would compile all those reviews, you and Dan Budnik wrote for ‘Bleeding Skull.com’ into a book, you’d have the greatest publication on horror trash cinema ever!” This is a true story. I became obsessed with the idea of creating a book. Soon after, Dan and I were driving to a screening of H.G. Lewis’s SOMETHING WEIRD at the New Beverly in Los Angeles. Unfortunately, a traffic jam caused us to miss the movie. But not unfortunately, we stopped at Jerry’s Deli to eat and decided that it was time for a Bleeding Skull book. The book would focus exclusively on our love for 1980s trash-horror cinema, which we felt was the most misunderstood and reviled cinematic era of all time. We spent the next three years writing new reviews, revising and rewriting old reviews, scouring the world for ephemera, and calling the Margaret Herrick Library of Motion Picture Arts and Sciences our second home.

DG: What do you look for in a trash film?

Z: When I apply the term “trash” to a movie, it’s not derogatory. It’s celebratory. It’s defining a specific era of vintage low-budget/no-budget genre filmmaking that relies on creativity and resources above all else. A trash-horror film is fun, shocking, and engaging, usually all at once. It provides an escapist, over-the-top universe that can’t be found anywhere else. Even when it’s boring. 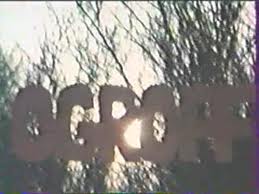 DG: How do you convince people to see the likes of ORGOFF or FROZEN SCREAM or BLACK DEVIL DOLL FROM HELL, if they dismiss it out of hand just because it looks so cheap? Is that something you even try to do or are you consider yourself just preaching to those already predisposed to like them?

Z: I don’t want to convince anyone of anything. Life is too short to worry about that. If people don’t like BLACK DEVIL DOLL FROM HELL because it looks like it was found in the dumpster of an abortion clinic, that’s fine by me. I’d agree that Bleeding Skull is basically for people who are already predisposed to enjoying these movies, our comrades-in-arms.

DG: Do you think some of these films become more appreciated because of their obscurity, like how QUADEAD ZONE was basically impossible to find? Or is their obscurity part of their charm?

Z: Initially, the thrill of the hunt is a big part of the attraction. But that attraction can die instantly if you end up with a movie that makes you want to run over your own legs with a car, like GHOST STORIES: GRAVEYARD THRILLER. The appreciation grows when you stumble on something that’s truly special. Like QUADEAD. Like DEATH NURSE. Like A NIGHT TO DISMEMBER. Like DOCTOR STRAIN THE BODY SNATCHER. When that happens, the obscurity is inconsequential. It’s about the movie. Always about the movie.

DG: How do you determine what is or isn’t worth writing about for the site?

Z: As a rule, we don’t cover anything that’s widely available. That’s not where our interests lie. Again, the thrill of the hunt is a big part of our passion and enthusiasm for these movies. After ten years, we’ve gotten pretty good at making our own choices in terms of what to review. It’s rare that we’ll watch something specifically for the site and then decide not to review it. 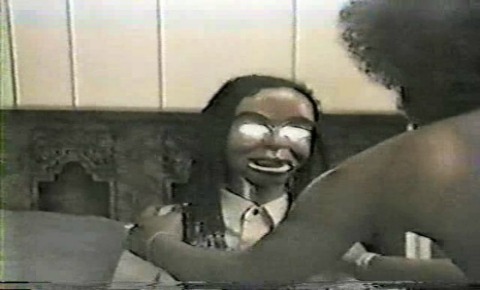 DG: I do want to talk about Chester Turner. How did you feel when you were first told that he was alive and well and living in Chicago?

Z: I didn’t believe it. I’d been burned by a fake Chester Turner hoax a few years earlier, so I was very skeptical. But Louis Justin, owner of Massacre Video and finder of Chester Turner, sent me some video footage of Chester talking about BLACK DEVIL DOLL. And it was real.

Click here to get tickets for tickets to see Ziemba and Chester Turner at Chicago’s Lincoln Hall for a special screening of TALES FROM THE QUADEAD ZONE!  Hope to see you there!