Home  ⁄  The Wire  ⁄  A JOURNEY THAT BEGINS WHERE EVERYTHING ENDS: WILL JOHNSON REVISITS ‘THE BLACK HOLE’ (1979)

On May 25th, 1977, STAR WARS took over the world. Surprising industry experts, the sci-fi/fantasy epic became the film event of a generation and made money hand over fist- not only from massive ticket sales, but also from a previously unheard of level of merchandise sales. Every studio in Hollywood saw the returns and wanted to make sure they could get a piece of the pie as well. If the people wanted space movies, the people were going to get space movies. 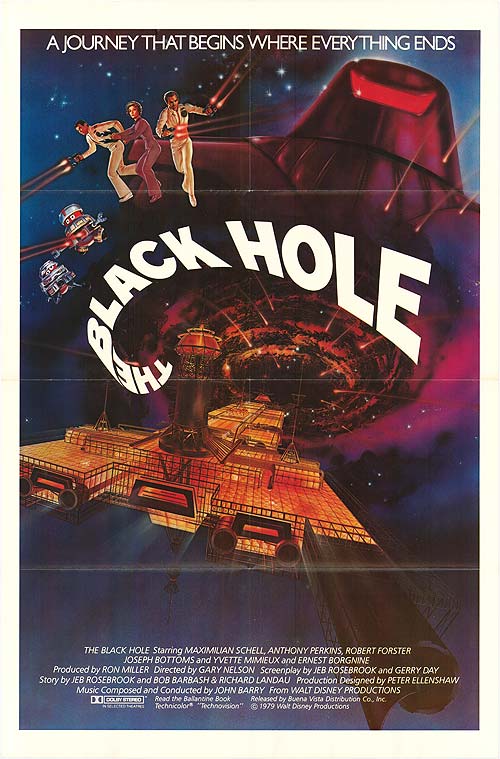 Disney, future owner of George Lucas’ empire, was no different. They quickly got to work on making their own space epic, THE BLACK HOLE. It was going to be a live action adventure on a scale that the studio had never attempted. To head up the ambitious project, Disney tapped Gary Nelson, who had made the earlier hit, FREAKY FRIDAY, for the studio. This choice, paired with the use of a subpar script, put the movie on shaky ground from the start.

They were sure they had a hit on their hands, though. Merchandise was manufactured in droves to prepare for the hoped for onslaught. A comic book series was commissioned (with Jack Kirby, no less) adapting the movie and even continuing the story beyond the film’s closing scenes. Action figures, model kits, trading cards, and more were all made.

When the film hit, however, it was nowhere near the success that The Mouse needed it to be.  Audiences expecting a movie that would more or less be another  STAR WARS were, instead, treated to 2001, but, y’know, for kids. The film was talky and the science was wibbly-wobbly. It wasn’t the kind of film that kids would beg their parents to see again and again. Overall, it was a flop and a failure.

Did the film deserve to be forgotten so briskly? Or is it just a matter of it not being what everyone was craving after STAR WARS?

The film did have a lot going for it.

For one, it had amazing effects that still hold up next to its better remembered contemporaries.  After being denied access to ILM, Disney pulled Peter Ellenshaw out of retirement to oversee the effects on the film. Ellenshaw had been a major part of what made previous live action efforts from the company work so well, having done work on 20,000 LEAGUES UNDER THE SEA. Watching THE BLACK HOLE today, his miniatures are still a thing of wonder, and the computerized camera system he helped develop was actually better than the Dykstraflex system it sought to replace.

The film also used state of the art (for the time) computer graphics. The green lines in the opening credits were the longest computer created scene ever upon the film’s  release. You can’t help but see the seeds of TRON, a later Disney film that connected better with audiences than THE BLACK HOLE.

After John Williams’ now classic score for STAR WARS became a bestseller, Disney decided to bring in John Barry, a composer legendary for the James Bond series. This was another good move. Barry’s score is a highlight of the film. It’s bombastic and eerie, reminiscent of both Barry’s ‘Space March’ from YOU ONLY LIVE TWICE, and classic sci fi fare like FORBIDDEN PLANET (which Disney also had a hand in on the effects front).

But great effects and a great score do not a great movie make if the script isn’t just right, and that’s where THE BLACK HOLE kind of falls apart. On the surface, the story seems interesting. A crew of scientists finds a derelict ship, The Cygnus, resting on the edge of a swirling black hole, staffed with robots and run by a crazed mad scientist who’s overtaken by his curiosity about what lies in, and beyond, the titular black hole. In practice, the story plods along at a slow pace. It introduces elements (ESP?) and never expands upon them or makes them seem like anything more than a convenient plot device or attempt to make mundane things seem more fantastical.

The cast, in retrospect, seems like there was a sign-up sheet in the green room of some TV variety show, but a few members still manage to shine while being bogged down by poor dialogue. In particular, Maximilian Schell’s villain is great fun to watch. He’s like an unhinged Captain Nemo, mixed with Hugo Drax from MOONRAKER. Robert Forster ( whom I’ve always known best as the Delfonics-singing Max Cherry in JACKIE BROWN) is also good as Captain Dan Holland — even if the role has almost nothing to bite into.

Rounding out the cast is Ernest Borgnine as Harry Booth, the old man on the crew who talks a big game and spouts exposition while acting exactly like Ernest Borgnine. A half-asleep Anthony Perkins as Dr. Durant is occasionally interesting, but can’t help but make you think of Norman Bates’ awkward manner of interaction. Yvette Mimieux and her terrible hairdo play Dr. Kate McRae with nothing memorable except for how terrible her hair is and that her character randomly has ESP (seriously!). Finally, Joseph Bottoms plays Lt. Pizer, who feels like the most Disney bit of casting. He’s the younger wise-cracking space adventurer character, but he’s far from being Han Solo. He’s not even Solo Lite. He’s just kind of also there.

Which brings us to the uncredited robot roles…

Roddy McDowall, everyone’s favorite sentient chimp, plays V.I.N.C.E.N.T, the love child of R2-D2 and one of those flying training remotes Luke fights with on the Falcon. V.I.N.C.E.N.T is obviously the thing in this that kids are supposed to like, but he has no real personality. He’s like C-3PO without the indignation. His design is cute, I suppose, but the static eyes and weird paint job make him seem way cheaper and far less endearing than the iconic droids from a galaxy far, far away.

With a bit more personality, Slim Pickens plays B.O.B, an older robot similar to V.I.N.C.E.N.T., but beaten all to shit. Literally, when they were designing him, they took a baseball bat to the model and moved forward from there. He’s more likable than V.I.N.C.E.N.T, but feels out of place in a film that is seemingly taking itself fairly seriously.  In a movie full of Killbots, these guys are Cuddlebots.

The best robot in the film is Maximillian (not to be confused with Schell, who plays his master, Dr. Hans Reinhardt). Maximillian is a menacing mute death machine with blenders for hands and a face only a Cylon could love. He is legitimately creepy, and one of the main elements of this mess that has stayed with me through the years. His spinning blade hands are a grim way to go in comparison with the clean cut of a lightsaber.

I do wish Maximillian’s design had been tweaked a bit. In fact, I wish the film’s design in general had been able to come off as more than just a blend of STAR WARS and BATTLESTAR GALACTICA. So many of the robot soldiers and background drones seem like something from my vintage “STAR WORLD” action figure case than truly great designs in their own right.

Still, if you like the sharp angle aesthetics of late 70’s sci-fi, there’s a lot of it on display. One of my favorite scenes is the Arcade battle, where the Cuddlebots play high-stakes GALAGA against one of the top robot soldiers, S.T.A.R. (very creative name, I know).  S.T.A.R. and the troopers all have a design that couldn’t have come from any other decade.

The script, as previously discussed, is a mess. It constantly finds ways to put all of these uneven elements into even more uneven situations. The tone is all over the place — playful robots one second, eviscerated flesh the next. Things like using ESP to communicate with the robots feel shoehorned in, and the big twist seems anticlimactic by the time you get to it. The “science” is spoken often, but has no grounds in reality. In 2014, Neil DeGrasse Tyson went so far as to say that it was the most scientifically inaccurate film of all time.

Interesting character interactions are few and far between, with Perkins and Schell coming closest to being interesting, but their pairing is almost more notable for how homoerotic their interactions seem when viewed in 2017. Dr. Reinhardt, having been alone in space for many years, barely acknowledges Dr. Kate McRae as existing (must be the hair), but keeps trying to set up a dinner with Dr. Durant — a man he is seemingly enraptured with.

Overall, the film definitely deserves to be seen again (or for the first time). The ’70s aesthetic , the Ellenshaw effects, and the amazing Barry score are worthy of rediscovery by modern audiences. While it’s not STAR WARS, it is mostly entertaining, and will make you appreciate how all of the pieces fit together better in STAR WARS. The ending, while pure nonsense, is still an impressive sight to behold and will make you rewind it just to get a better glimpse of what can only be described as Hell.

Hopefully, you won’t feel like the entire experience took place there. 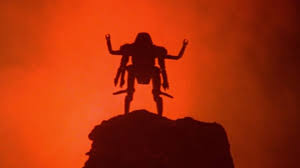 Will Johnson
Will Johnson is a writer, actor, and obsessive film collector in Dallas, TX. He can’t remember a time before Ewoks, and refuses to believe such a time existed. When not voraciously consuming filmed media, he is spending time corrupting his children or hamming it up on a local stage.
You can follow him on Twitter or Letterboxd @BingoLollipop

Latest posts by Will Johnson (see all)
Please Share