The PLANET OF THE APES franchise has always been a bit of an odd outlier in the pantheon on science fiction film series. While the original Pierre Boulle novel launched nine films, two television series, and countless “damn dirty apes” references, it’s never quite gotten to the point of nerd cultural saturation that the likes of STAR WARS, STAR TREK, LORD OF THE RINGS, HARRY POTTER or even DOCTOR WHO seem to have achieved. It’s a little bit puzzling as to why – the original APES film series was hugely successful and the revived films are either surprisingly good or directed by Tim Burton, so why don’t APES characters appear with the same frequency on ill-conceived political memes or T-shirts at Target as the characters in the other franchises? 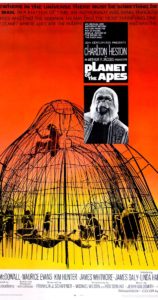 Part of the issue, I gather, is that while the other franchise fandoms are very much based on the characters within them, the APES franchise has always been based on the themes that it presents in showing cultural ramifications of human behavior. The other series have easy-to-identify characters that have appeared in roughly the same form for years if not decades, while APES is a portrait of a full timeline, where the characters don’t matter as much as the ideas that they can represent. Outside of a few moments from the original 1968 PLANET OF THE APES, there’s very little about the series that translates well to lunch boxes and parody videos. It’s just too darn overarchingly ruminative for the general pop culture treatment.

(I can hear you arguing that STAR TREK or DOCTOR WHO have similar thematic goals, but both of those also have plenty of recurring characters and creations that can tantalize a fanbase and make for good cosplay. APES has Cornelius, Dr. Zaus, Caesar and… well, other apes. It’s not much to go on after 60-plus hours worth of content. It’s also a very limited pool when it comes to fan fiction.)

One of the notable ways that APES has never really succeeded in entering the pop culture lexicon has been the lack of a genuinely memorable video game. The sole time in which a video game was released for the franchise (not counting occasional skins and updates to other games) was 2001, when a pair of poorly-received games were issued for the PlayStation and Game Boy in an attempt to tie into the Tim Burton film of that year. (Notably, the games weren’t tied into the new film at all, instead using the original novel and two films from the earlier series as a touchstone.) 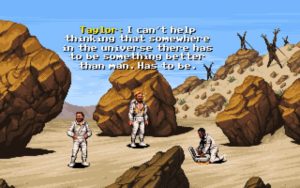 The key word in that last paragraph, however is released, as PLANET OF THE APES did have one other chance to jump from the silver screen into your controller-held hands. 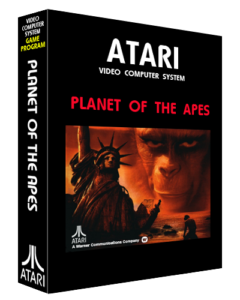 In the early 1980s, video games had their first taste of being a cultural phenomenon, and the Atari 2600 was the video game console to beat. Everyone in the field wanted to make titles for the system that sold over 30 million units throughout the globe, over ten times as many as the Intellivision, its closest rival. Movies, naturally, were a great source for potential source material, presenting a well-known trademark to kids eager to glom on to a recognizable brand.

This resulted in quite a few notably bad decisions (most notoriously, the historical failure of the video game version of E.T. THE EXTRA-TERRESTRIAL) but had a few successes as well, notably RAIDERS OF THE LOST ARK and KRULL. Film studio 20th Century Fox, no doubt figuring that they already had the licenses, launched their own line of games; While some were originals, most were based on films, such as ALIEN, M*A*S*H, PORKY’S, and FLASH GORDON. 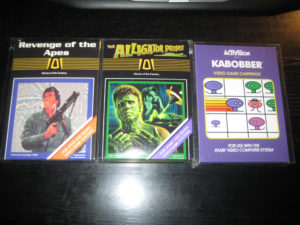 In 1983, work began several games based two of Fox’s film properties – PLANET OF THE APES and 1959’s THE ALLIGATOR PEOPLE, a b-grade horror pic starring Beverly Garland and Lon Chaney, Jr. Neither game, however, ever ended up being released due to the company shutting down production on games during the video game crash of 1983. John Marvin worked for the company and served as the programmer for PLANET OF THE APES, while John Russel worked on ALLIGATOR PEOPLE.

“ALLIGATOR PEOPLE was a really bad ‘50s movie about people that are being injected with a drug by a mad scientist and they are slowly turning into alligators have to run through a moving maze and all these alligators,” Marvin explained in a 1999 interview with video game magazine Cyberroach. “But there were also syringes that you had to dodge and if a syringe touched you, you slowly turned into an alligator. Now this was the [Atari] VCS, so we’re not talking too graphic, but I was quite amazed by it, I think I still have an Alligator People t-shirt somewhere, it doesn’t fit me anymore, my son wears it as a night shirt, I really miss that game.”

As for PLANET OF THE APES, “you had this human and you were chased by apes and the only way to win the game: you had to find the statue of liberty like in the first movie. There were different kinds of apes, the Orangutans, the Chimpanzees and the Gorillas but like any VCS-thing they were big and blocky. It was a jump and run and it never saw the light of day.”

Marvin then moved on to working for Epyx, and the two games he designed, both near completion, vanished into video game history. However, collectors doing what they do when it comes to unearthing lost treasures, in 1996, collector Marlin Bates purchased a copy of a prototype cartridge labelled “Alligator People (for a rumored $3,000) – a perfectly playable game that, while not finished, seemed to solve at least one of the mysteries of movie-to-video-game history. 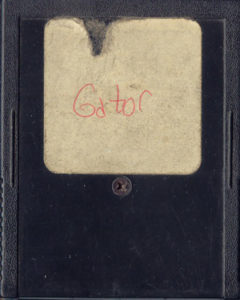 Six years later, however, the mystery deepened. Matt Reichert, the Atari collector behind AtartProtos.com, discovered that the gameplay didn’t match ALLIGATOR PEOPLE’s description at all – in fact, it matched that of Marvin’s 20th Century Fox project. In other words, they were wrong. It was APES all along.

This wasn’t too surprising, as the nature of Atari 2600 development meant that games ended up in reused shells quite a bit. An actual ALLIGATOR PEOPLE prototype surfaced later that year, meaning that both previously-lost titles could now be imported to ROMs and played on Atari 2600 emulators nearly two decades after their release had been abandoned.

The story of the Atari 2600 version of PLANET OF THE APES doesn’t end there, however. As Marvin mentioned, the game wasn’t completely finished, and playing the game was an exercise in frustration due to limited movement. One user in the Atari Age forums noted that “I believe the apes were going to be able to move up and down as well as the side-to-side they do now. I booted the game up (Worship the Woodgrain) and watched the movement patterns of the enemies. When they reach the far edge of the screen, you can see the sprite change for just a moment to either a ‘stick’ figure or a ‘stick figure with one foot raised.’ This animation technique was usually used to show a character moving up and down screen (think Berzerk robots.) Anyway, the gameplay would be nearly finished had they given the enemy sprites more than just a “right to left” movement.” 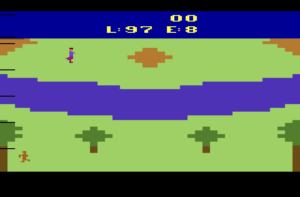 The game, then, needed some extra touches before being considered “complete,” and those came in the form of programmers at Retrodesign’s Thomas Jentzsch, who completed the game, added music by Paul Slocum and a title card, and issued it on a limited-edition Atari 2600 cartridge, the way it was meant to be seen. Granted, for legal reasons, they had to give it a name change, issuing it as REVENGE OF THE APES for copyright reasons, but one could finally play the first (and, admittedly, pretty fun) PLANET OF THE APES video game in its natural habitat. 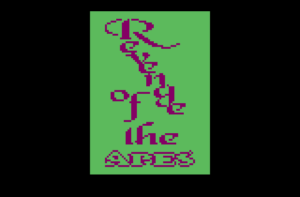 In REVENGE OF THE APES, you take the role of Charlton Heston’s Taylor character from the first film, and your mission is to make it to the final screen, avoiding apes, chimps, and orangutans determined to send you back to the ape village. There’s not a heck of a lot to the game, as with many games of the era on the console, but it’s an entertaining enough time passer. Granted, this take on the film dismisses all of the above-mentioned examination of social constructs, instead offering a basic “man-vs.-primates” scenario, but, had it been completed, it undoubtedly would have at least garnered temperate reviews among Atari 2600 owners. 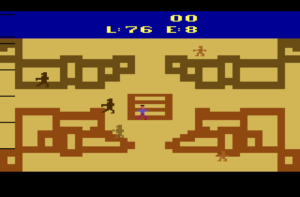 Thankfully, this being the modern age of internet accessibility, you can actually play both versions of APES right now if you so desire and have an Atari 2600 emulator installed. (I use Stella, available here, but others may have their own tastes.) You can download a ROM of the incomplete PLANET OF THE APES version, unfinished since its 1983 abandonment at Archive.org here, and you can grab the significantly more playable REVENGE OF THE APES version from 2003 at AtariAge here. 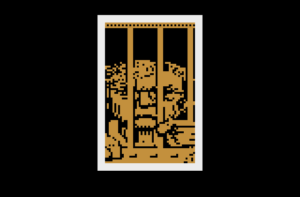 While the journeys to the PLANET OF THE APES are continuing to be made across the silver screen, the franchise’s link to video games has been, at best, negligible, but its first joystick-controlled incarnation certainly deserves more attention than it was given during its initial abandonment. Who knows what sort of playable entertainment could come from the source material in the future? Perhaps one day we’ll truly see a time when sprawling, world-building, thematically-inventive APE games evolved from men.

Tags: atari, Atari 2600, Cartridges, planet of the apes, Video Games, War For The Planet Of The Apes