Home  ⁄  The Wire  ⁄  [KAIJU WEEK] GODZILLA: FINAL WARS Throws Everything At The Wall And It All Sticks 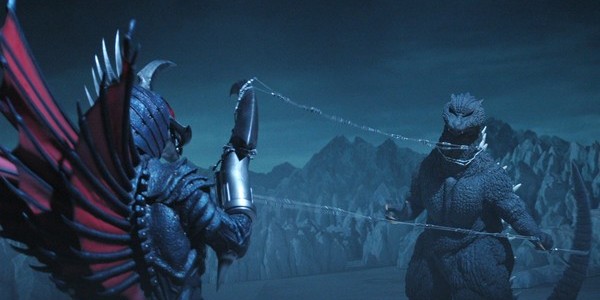 There are essentially two different kinds of Godzilla movies. The ultra-serious “real world” type and the silly giant monster type. Even the original 1954 film has two different versions: the original GOJIRA and the dumbed down American edit (the one with Raymond Burr) GODZILLA: KING OF THE MONSTERS. 2004’s GODZILLA: FINAL WARS, directed by Ryuhei Kitamura, is mostly the latter. I usually lean towards total seriousness but this “kitchen sink” of a kaiju film happens to be so damned entertaining that it slips by as one of the best depictions of the green giant.

An extra-terrestrial race, calling themselves Xiliens, has effectively taken over the Earth and world leaders have been replaced by doppelgängers. The Xiliens have taken control of nearly every kaiju and all major cities are under attack. A mutant bodyguard, a biologist and a few others are convinced by an American military leader to unleash Earth’s ultimate and only weapon. Our big green hero is reluctantly freed from an icy prison in Antarctica, with the hope that he will destroy all monsters without destroying us. 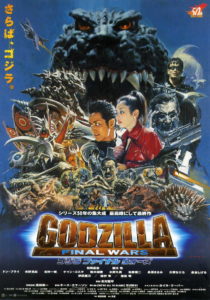 When I call it a “kitchen sink of a kaiju film”, I mean everything including the kitchen sink. The film plays out as a giant, almost psychedelic, mural of madness. This is THE AVENGERS of giant monster movies! We get an appearance by Mothra and a subplot involving Minilla, (the son of GODZILLA). We even get two appearances by GINO (Godzilla in name only) the creature from Roland Emmerich’s version of the franchise AND we get to see the two of them (very briefly) fight! This is a film that aspires to be every kind of movie and in it’s own way it sort of succeeds. We get some MATRIX inspired martial arts action and spaceship dogfights. We get a car chase with a motorcycle. We get a wise old man and a kid. We even get a giant robot! If Michael Bay ever did make a good movie it would look somewhat like this one. Mr. Bay could actually learn a few lessons from FINAL WARS. The TRANSFORMERS films are a jumbled mess. Here (as with most of the Godzilla franchise) the fights are cleverly choreographed. We know exactly who’s fighting who and the results are clear and totally in contrast to the “ching ching ching… robot”, cgi, “MTV style” editing that Michael Bay is so famous for. This is a true “man in suit” stomping around on modeled landscapes and buildings with little or no cgi. Also, The humor works well. As silly as it is, it sure beats the slightly misogynistic, unfunny attempts at levity that Michael Bay tries so hard to achieve. There’s even a small amount of depth, even if it’s handled in a somewhat pedestrian kind of way.

There isn’t much logic or realism in this one. The bad guy throws tantrums and jumps around and characters interact during entire conversations in both English and Japanese, as if they each had a “babel fish” in their collective ears. A spaceship is able to lead GODZILLA as he swims around the Earth in what appears to be minutes. A more “realistic” GODZILLA movie had been released just a few years prior but that one was mind-numbingly boring (aside from the fifteen to twenty minutes that GODZILLA was actually in the movie.) As silly as this movie is, at least you end up caring about the human characters. In the Gareth Edwards’ 2014 reboot, I couldn’t have cared less about the human characters or any of their relationships. In FINAL WARS, when a character falls under the antagonist’s control I actually gave a damn. In the 2014 film the only interesting character—Bryan Cranston’s Joe Brody—dies before any kaiju actually show up.

The film also features an impressive score from the late Keith Emerson, keyboardist of Emerson, Lake & Palmer. Emerson composed roughly half of the film’s score. This added a prog-rock element that really sits well with its share of the action. It makes sense being that many of the early GODZILLA movies were products of the 70’s anyway. The rest of the film’s score is a more modern day electronic, almost industrial sound composed by Nobuhiko Morino and Daisuke Yano. A great if slightly mainstream, fit for the much of the martial arts sequences. We even get a song by Canadian rock band Sum 41 during the (very short) battle with Emmerich’s “Zilla”. Pop punk isn’t really my thing, but it works for the scene.

If there is anywhere the film falls short, it would be its lack of a message. The original GORJIRA made a statement about the very real terror of nuclear weapons, riffing on the aftermath of the Second World War and the looming threat of a nuclear holocaust that possibly could’ve eliminated all life on Earth. The original GOJIRA became a symbol of the fear that swept nearly the whole world during the cold war. The most important fight of this first film was actually by fist in a laboratory over a scientist not wanting to unleash yet another weapon against this unstoppable kaiju over fear this weapon being abused in the future. GODZILLA: FINAL WARS contains no such scene and no real humanitarian message except for, “we must all work together.”

If you don’t take it too seriously, Toho’s GODZILLA: FINAL WARS is a rewarding and highly entertaining experience. As bat-shit crazy as it is, this is what popcorn, Junior Mints and Snowcaps were invented for.