It seems strange to claim that the PHANTASM films have their roots in a kid’s comedy like KENNY & COMPANY, but as is to be expected from a filmmaker like Don Coscarelli, it is far from a typical offering in the genre. 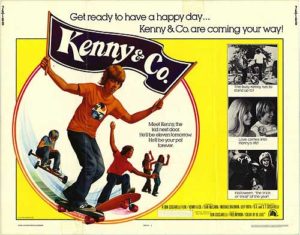 There is no real plot to the film beyond following twelve-year-old Kenny (Dan McCann) and his best friend Doug (A. Michael Baldwin) as they wander through school and their suburban Southern California town. They try to ditch their younger neighbor Sherman (Jeff Roth), but eventually betray affection for the kid. They deal with a bully in the closest the film has to a running plot. Kenny has his first hesitant romance with a classmate named Marcy (Terrie Kalbus) that begins quickly and ends just as suddenly. Doug’s Secret Service Agent dad (Ralph Richmond) plays mean-spirited pranks on Kenny that ring true to the way adults think they’re being hilarious when they’re actually scaring the kid they’re supposed to be entertaining. Most importantly, while preparing for Halloween, Kenny has his first harsh lesson about death when his ailing dog has to be put to sleep. The film is packed with incident, but formless in a way that captures the lazy day feeling of kids with their whole lives ahead of them who just want to have fun and push away the boredom of school.

So how does this all relate to PHANTASM? I’m so glad you asked, imaginary, quizzical reader. 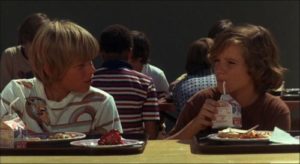 There are, of course, the numerous cast members of KENNY & COMPANY who wound up in the PHANTASM films. Baldwin and Reggie Bannister (who plays one of Kenny’s teachers) are, of course, the most important. But Coscarelli also brought back Kalbus to be the Fortune-Teller’s granddaughter, Richmond to play the bartender at the bar where Jody picks up the Lady in Lavender, and Kenneth V. Jones (playing Kenny’s football coach here and the mortuary caretaker in PHANTASM who takes the first silver sphere to the head in one of the most iconic scenes ever in a horror movie). Just as important is Fred Myrow who delivers a good score here, but cemented his place in film history as the composer of the PHANTASM theme. 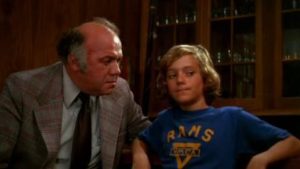 But there are two other ways in which KENNY & COMPANY leads to the development of PHANTASM. The first, a Halloween sequence in a makeshift haunted house, is obvious. The second, Kenny’s growing interest in and fear of death, is more subtle, but also more important.

Since that haunted house sequence is a lot of fun, let’s talk about it first.

Full of nightmarish images and ideas that do not make much logical sense yet are still unsettling (Sound familiar?), the haunted house finds Kenny, Doug, and Sherman wandering through black-draped hallways, robbed of any sense of where they are. There is a mixture of cheesiness with rubber bats hanging from strings and honestly startling images with hulking men in monstrous, freaky masks. More specifically, the reveal of a fake corpse hanging from a noose reminds me of the way Mike passes by the Lady in Lavender in the third act of PHANTASM. You can see the sudden change in tone of the film, as Coscarelli seems to be trying to scare the audience as much as the characters. You can feel the moment that a young filmmaker realized what he was really good at and embraced it.

Kenny’s search for understanding what happens when you die after the family has to put his dog to sleep speaks as much to finding some kind of peace with death that Mike goes through in PHANTASM. When he poses the question of what happens after you die, his father is blunt in his response that he does not know. He says that some people believe you go to Heaven, but ends on the disquieting idea that when you die, that’s all there is; you are simply gone. This question of what happens after you die and images of death come up repeatedly in the film: Kenny and Sherman see a dead man in the aftermath of a car accident; Kenny speaks about death with a friendly elderly man who is a little less scary on the subject than Kenny’s dad; and many of the pranks Kenny and Doug play on strangers revolve around people’s fear of death, even though the boys do not realize it. 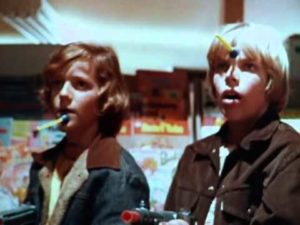 The overall tone of KENNY & COMPANY is light, but when the film makes stabs at deeper material, like Kenny’s constant questions about death or listening to his mother’s advice on trying to outsmart the bully instead of fighting him, it takes itself very seriously. Some of these moments, like the scene of Kenny and his parents taking his dog into the veterinarian’s office, are heartbreaking. Others, like the scene of Kenny and Sherman talking about death after witnessing the car accident, are clunky. Directly approaching the question of what happens after death in an earnest manner delivers hit-or-miss results. When Coscarelli refined that question through horrific metaphor in PHANTASM he sharpened it and touched on a possibility of true horror: when you die, there is an afterlife and it is enslavement and misery forever. 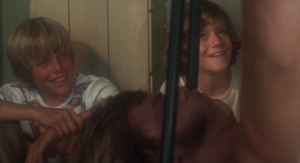 I do not want to overstate the potential appeal of KENNY & COMPANY to casual PHANTASM phans. If you are merely interested in the films due to their embrace of nightmare logic and horror imagery, chances are you are not going to dig the film. But if you appreciate the series’ ongoing questions about if we should be fearful of what comes after death, there is a lot of raw material here to sort through and mull over. It is fascinating to see what ideas Coscarelli discarded, and more importantly, what ideas he built upon.