Stephen King is the most influential voice in horror of the late 20th century. His books have been bestsellers since his debut and have gone on to spawn numerous adaptations in film, TV, video games, and other media. King Of All Media looks at those adaptations, starting with his TV miniseries in chronological order. Each week Alejandra Gonzalez and Rob Dean will discuss a new miniseries project of King’s — with today’s installment being on 1997’s TRUCKS, directed by Chris Thomson. 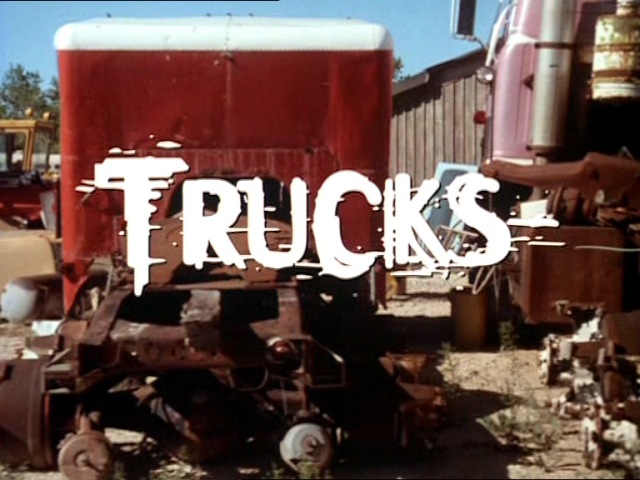 Rob Dean: As we’ve undertaken this project, each week looking at a different Stephen King miniseries or TV movie, we’ve done a fair job of judging each entry on its own merits. Not beholden to how it is adapting the particular King work, or even how it works compared to other versions of the adaptation, we look at the positive and negative aspects of each televisual project. However — with that in mind, I couldn’t shake one simple question as I watched TRUCKS:

How the fuck you gonna make a worse version of MAXIMUM OVERDRIVE?

Both that film and this made-for-TV movie are based on the same short story (the appropriately-named “Trucks”). Both movies deal with the deep-seated fear of automation that lingers in the minds of every human. Both versions essentially have the same plot, with a band of survivors huddled together in a remote truck stop while being terrorized by large trucks. However, MAXIMUM OVERDRIVE is infamous for being very bad, and written/directed by King at the height of the author’s cocaine addiction. This version, while directed by TV director mainstay Chris Thomson, was written by Brian Taggert — a man responsible for rather solid genre bits like POLTERGEIST III, VISITING HOURS, many episodes of V, and the incredible OF UNKNOWN ORIGIN. A smaller scale film in the hands of reliable workmen has the promise of being something interesting.

Instead, TRUCKS is an incredibly boring movie that has no sense of tone, makes little to no sense, and chases after spectacle despite not having the budget for it. For me, there are two highlights to this project—Brenda Bakke is good (as she was in TALES FROM THE CRYPT PRESENTS DEMON KNIGHT and the short-lived Sam Raimi TV series, AMERICAN GOTHIC) and there’s a tremendously weird scene involving a toy truck slowly but surely killing a mailman. That’s it in terms of highlights for me. Not even accomplished lead actor Timothy Busfield (THIRTYSOMETHING, REVENGE OF THE NERDS) delivers a good performance, and the plot doesn’t make sense—but not in a weird ass way, but just a lazy slog that is full of holes.

Ale — did you find yourself comparing the two films? What did you think of 1997’s TRUCKS, and were there any saving graces for you? 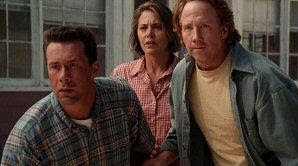 Alejandra Gonzalez:  Rob, I haven’t actually seen MAXIMUM OVERDRIVE, but after watching TRUCKS, I can’t really say that I feel compelled to. Actually, I was never compelled to watch anything where the primary antagonist is a truck (looking at you, TRANSFORMERS… or whatever). I agree that the “death by Tonka Truck” scene was among the only redeeming qualities in TRUCKS, but I can’t be honest with our readers and say that there was much else that made this worth watching. The people who have been keeping up with us on our journey will know that we usually try to say something positive about these miniseries, and if nothing else, we always acknowledge that the premise had potential, but failed in execution. I don’t know that I can say the same about TRUCKS, at least personally.

While — as you mentioned — killer trucks seems like a good vessel by which to explore the fear of automation, it’s just too silly. I can’t take it seriously, which would be fun if the movie wasn’t trying to be so genuine. Still, the source material must have some promise within it, since it was essentially adapted twice. I haven’t read the source material — have you? Does TRUCKS accurately represent the quality of the short story?

Rob Dean:  Yes, I’ve read the short story of the same name, and it’s fairly similar (in broad strokes, at least): trucks turn sentient, terrorize people at a truck stop, need them to fill up the gas tank. MAXIMUM OVERDRIVE changed this up by expanding the focus and suddenly having all (well, most… it’s really muddy) technology turn on people. TRUCKS changes it up by throwing up so many “reasons” for the trucks coming to life, which is simply unnecessary. In this miniseries there is a chemical spill, talk of a meteor storm, a discussion about the town having been built on the site of a meteor crash, and Area 51 (they get a LOT of mileage out of mentioning Area 51). I believe all of these are meant to allude to some origin for trucks coming to life and randomly deciding to turn villainous. But, despite all of this attempt at handwaving a reason, they never say why only trucks are affected and nothing else. And that’s kind of the main issue with TRUCKS — it doesn’t recognize what it is. 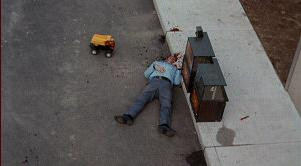 As Mr. Glass says in UNBREAKABLE, “You know what the scariest thing is? To not know your place in this world. To not know why you’re here… That’s… That’s just an awful feeling.” TRUCKS doesn’t recognize that it is an inherently silly premise and an excuse for spectacle. Yes, the story is based on fears of technology and automation that have been covered in many movies, like MODERN TIMES (1936), PULSE (1988), GHOST IN THE MACHINE, THE TERMINATOR, CHRISTINE, and others. But a good storyteller would use those real fears as a springboard for a madcap ride. That’s what makes the beginning of MAXIMUM OVERDRIVE work — it is ludicrous and gruesome and over-the-top, and once that stops the movie is deflated. TRUCKS doesn’t realize that it is a movie couched in real fears but would be better explored through a lot of vehicular action and exaggerated gruesomeness and insanity. It’s far too subdued, and not nearly loony enough. The constant attempt to ground the story in a “logical” explanation — mostly delivered by a TV set that shouldn’t work but does, and only gets the exposition channel — undercuts the fact that this could just be a goofy thing with some menace that people would overanalyze on the Internet 20 years later.

Are there any technology-run-amuck stories you do like? And what did you make of the ending — in which a sentient helicopter rescues the survivors of the truck stop but is vaguely taking them somewhere else? What’s the point of that cliffhanger?

Alejandra Gonzalez:  You know, I think I may actually appreciate the attempted explanation that TRUCKS sets up. I feel like had it not been there, I would have criticized it for a lack of explanation. It obviously didn’t work, and as you mentioned, it may have worked better to have no explanation at all and have taken a less serious approach in order to make it a really fun time. Like RUBBER! 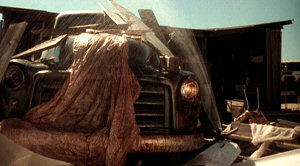 I actually do have a bunch of technology-run-amuck stories that I love! Does SMART HOUSE, from 1999, count? TERRORVISION, JOHNNY MNEMONIC, so many! Having seen UPGRADE a little early, I think it will be another amazing movie about evil technology, which further proves that maybe TRUCKS could have worked after all. As for the ending, I think it’s pretty clearly implying that all technology/forms of automation are capable of turning against us, despite the medium. I’ll bet anything that helicopter only rescued them from the truck so that it could kill the survivors itself! It’s so, so deep.

You know what, Rob? I actually do want to commend TRUCKS for only being about 90 minutes long. I can’t say that next week’s miniseries, STORM OF THE CENTURY, will be as short, but I can say that I’ve heard good things about it! So, for old time’s sake, I will say that hopefully next week treats us better than TRUCKS did.