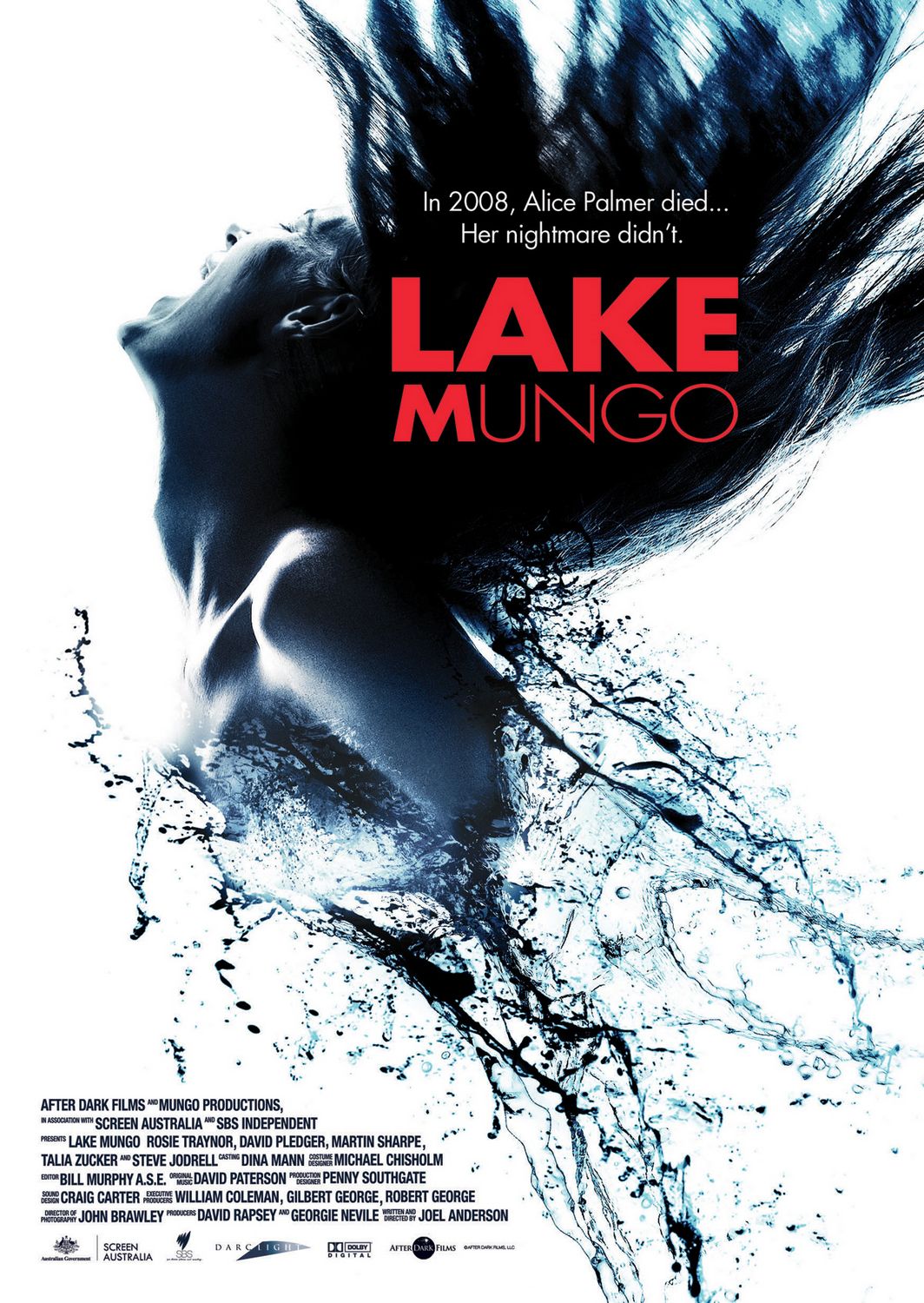 It took some time, but after a while, the masses finally rebelled against the found-footage film, spewing profanities across talkback sections on websites regarding how sick to death they are of the gimmick, and bemoaning studios/filmmakers for not trying something new. I suppose six entries in the PARANORMAL ACTIVITY series will do that to a person, and if those aren’t enough, its slew of knockoffs will happily bat cleanup. During the gluttiest glut of the found footage fad, studios were willing to play the odds, asking themselves, “How many of these flicks can we make, and which all begin with the amateur camera snapping on as someone in the background asks, ‘Is it recording?’ before the audience tunes out for good?”

Dozens of found footage flicks hit theaters in the wake of the first PARANORMAL ACTIVITY. Hundreds more were released more quietly as direct-to-video or video-on-demand offerings. None of them were worthy of being within the shadow of Australia’s LAKE MUNGO, written and directed by Joel Anderson. A rare member of, technically, the found footage family, instead of seemingly taking place in real time as characters stumble around the dark, it’s comprised of after-the-fact sit-down interviews with the main characters as they reflect on the paranormal events that inspired the “documentary” that’s being made – paranormal events, to be clear, that have already taken place. Yes, Mom, Dad, and Brother aren’t risking being possessed by ghosts or sliced in half by zombies run amok. The event that triggered this “documentary” – the horror the characters endured – is already behind them. On its surface, this may sound boring and completely lacking suspense. If these characters are still with us, then obviously they must have survived and surpassed whatever threat they were up against, so how scary could it be? LAKE MUNGO spends all its time with characters that are never in any immediate danger, but it never fails to be suspenseful or creepy, not to mention intensely moving.

Sixteen-year-old Alice Palmer (the surname a nod to TWIN PEAKS, another saga about a mysteriously doomed teen girl) drowns at a local lake during a family vacation just a few days before Christmas. Naturally, this devastates her family; they each walk around in a stupor, unwilling to believe that the worst has happened. They each attempt to deal with it in different ways: Dad goes back to work hoping to find distraction, Mom lives in denial and instead believes that Alice is merely missing (Dad, only, identified the body), and Mathew, Alice’s brother, takes his photography hobby to new experimental extremes. However, despite their different ways of dealing with Alice’s death, all of them soon come together when they begin to suspect the same thing: the potential haunting of their home by Alice’s ghost.

LAKE MUNGO plays like your typical Dateline special, utilizing the aforementioned sit-down interviews with immediate and extended family and friends; it also relies on old home movies and photographs to tell its story in the same way a genuine documentary would if its subject were already deceased. It all plays out so realistically – even when the supernatural elements come into play – that it honestly feels like a bonafide news story. Nothing overly fantastic happens – there are no scenes relying on silly CGI – and except for the final piece of “found footage” toward which all of LAKE MUNGO is heading, there’s nothing that’s so downright unbelievable that it all couldn’t just be the ongoing saga of one tortured family.

The supernatural elements come into play once Mathew begins pouring his energy into his photography, which he soon realizes contains ghostly images of Alice both inside the house as well as outside in the backyard. Because of this, Matt sets up a stationary video camera to capture anything of note. What he captures is Alice, who seems to be impossibly everywhere: in the mirror’s reflection down the hall, in the static of a television screen, looming in the dim darkness of the kitchen… right behind them all.

LAKE MUNGO isn’t strictly a horror film in the traditional sense, but that doesn’t mean it has no intention of trying to scare you, because it does – again and again. It chooses its moments methodically so that when they do occur, they’re far more upsetting than one would expect. In the case of most typical found footage films, five minutes of creepy footage mixed into 85 other minutes of other creepy footage is just footage. The audience begins to anticipate it, and whatever jolts result from it are forgotten as the next jolt comes along. Those moments striving toward fear become lost once they begin warring against each other. But, in the case of LAKE MUNGO, five minutes of creepy footage woven into a narrative about mourning and regret become jarring and real. The tension and the fear and the scary images remain in your subconscious because they ornament a film that is ultimately a reflection on loss, depicting a family dealing with death and the revelations it can bring.

The reality-based drive of LAKE MUNGO depends entirely on its cast; gratefully, the acting is across-the-board fantastic, but more importantly, convincing. With a film like this, one false performance can derail the good will that film has earned. Because if you don’t believe what you’re seeing, then you, the viewer, are left behind. If you don’t believe that Alice’s mother (Rosie Traynor) is in denial, and her father (David Pledger) is mourning, and her brother (Martin Sharpe) is saddened but also strangely detached, you’re simply not going to care. Luckily, no one appears as if they are giving a performance – instead, they sadly embody a grieving family undergoing strange events in their home and are trying to make sense of it all. The most significant role – that of Alice Palmer (Talia Zucker) – is naturally the hardest. When LAKE MUNGO begins, she’s already dead; it’s Zucker’s task to elbow her way from the confines of photographs, home movies, and haunting audio recordings to make Alice a real character. Through clumsy video cameras and blurry cell phone footage, her Alice becomes intensely real; you can feel that something is wrong – not with her, but around her. She’s haunted by something, and terrified – by everyday forces as well as those from another plane of existence.

While LAKE MUNGO is only 10% amateur footage, and a large portion of that footage is everyday video taken by various family members over the years, the “found footage” angle comes into play during the last act. Presented as cell phone video, this brief clip, which unleashes the “something bad” Alice had been dreading, and at which point LAKE MUNGO is at its scariest, finally shows its face. It’s the strength of this scene, and the extremely eerie footage, that demands LAKE MUNGO be included with other found footage heavyweights like THE BLAIR WITCH PROJECT and PARANORMAL ACTIVITY as a classic of the sub-genre. Many cineastes tend to disown films like those because “you don’t see anything.” Such a complaint seems rather adolescent, but putting that aside, LAKE MUNGO does show you the villain, the antagonist, the fate of our doomed Alice Palmer. It shows you death, coming at you from the darkness of Lake Mungo in shaky, blurry, two-inch-by-two-inch video. If, for the previous 85 minutes, you have surrendered yourself entirely to the film and invested yourself in this story and these characters, your simmering fear will overtake you, and stay with you long after the credits roll.

As of this writing, LAKE MUNGO is ten years old; it was released in 2008 as part of the generally terrible “After Dark Horror Fest: 8 Movies to Die For” platform. For the uninitiated, this branding, which attempted to sell a crop of films as too extreme for a wide release, was a misnomer: they were actually glorified direct-to-video low-budget horror garbage marketed as “the movies they didn’t want you to see” in an effort to turn a buck. It’s likely you’ve encountered a fair few of these in every Walmart parking lot Redbox, or on the third-to-the-last row of Netflix’s streaming menu. It feels dirty to see LAKE MUNGO (and the similarly underrated haunted house chiller THE ABANDONED) bare the same banner as LAKE DEAD and MONSTER MAN because it deserved much better. It deserved to find an audience – one that wants more than titillation and wide-mouthed, dripping, CGI ghost faces. Sure, some viewers know LAKE MUNGO exists, but not nearly enough as it deserves. (It currently has a 93% on Rotten Tomatoes, but an audience rating of 62%. A warning to those unfamiliar with the film: when scores are that disparate, proceed at your own risk.)

The horror genre can run the gamut from providing empty but harmless thrills for ninety minutes, to transcending the baggage it accumulates with every new cheap and exploitative film and providing an emotionally driven experience. Horror films can be extremely powerful, but sadly, they don’t come around often, and when they do, they get lost in a sea of competing mediocrity. This is the plight of the horror fan, whose collective tastes are as wide reaching as the genre itself. The truly dedicated and passionate horror fan needs to see it all: the classics, the schlock, the franchises, the indies. Because of this, they can become hardened, jaded, bored. They’ve seen every variation of the ghost and the vampire and the masked killer. The ghosts, therefore, have to become scarier and screamier; the vampires sexier and bloodier; the masked killers more ruthless. When a film comes along that can shatter all those expectations in a restrained and old-fashioned way and still present something compelling, it’s not just a surprise, but a gift.

LAKE MUNGO contains everything horror fans claim to want – real performances, real terror, intelligent writing, a refreshing lack of horror clichés, and absolutely no pandering to its audience – and yet it would seem many people either don’t know about its existence, or frankly, don’t care. And that’s pretty scary.