Nicole Kidman looks unrecognizable in DESTROYER, her famously refined features dirtied and sallow with a lifetime of weariness. Her porcelain skin is now grayish and liver-spotted, her eyes heavy with tiredness, the mop of hair on her head limp and streaked with white. You can hardly believe you are seeing her on screen, but its not just in the cosmetic details–it’s in her whole body, etched deep in her very essence. It’s there in that gruff sandpaper grit of her voice, hoarse and tuned to a note of brusque detachment, and it’s in the way she walks, pained and stoop shouldered and shambling along like some sorta of hollow-eyed zombie from a horror movie. In many ways she is a zombie. As Erin Bell, an aggressively antisocial LAPD detective who’s been nothing but a shell of herself since an undercover assignment went awry, Kidman disappears into her character, all but becoming a a bleary-eyed wraith crushed under the weight of trauma.

It’s that performance that keeps you captivated by DESTROYER even as the story doesn’t. The director, Karyn Kusama, trades in the genre thrills of her last two features, the giddily monstrous feminist B-movie fun of JENNIFER’S BODY and the creeping paranoid dread of THE INVITATION, for a different kind of pulp. Here she’s making nothing less than her own HEAT, the kind of sweeping, grit-encrusted crime drama that plunges its lead character into drug dens and greasy apartments and back alley encounters where they violently assert their desire to get results at any cost necessary. In other words, this is very familiar grime. With DESTROYER, Kusama, once again working with the screenwriting team of Phil Hay and Matt Manfredi, has made a sun-scorched blast of nihilism that is watchable, but which never quite grabs you.

Silas has returned. Silas is the mortal enemy of Erin, the vicious, cult-leader-like criminal mastermind that the detective has been tracking for seventeen years. As played by Toby Kebbell, in a long, lank black wig and open shirt that makes him look like the RING ghoul heading up a Doors cover band, he’s a soft spoken  psychopath who’s moistly searching eyes belie his hair trigger temper. Silas is leading a crew of drugged out good time miscreants as they plan out a bank robbery, and Erin, still fairly fresh to the force, is plucked out of her blues to go undercover with FBI agent Chris (Sebastian Stan) as a couple who are brought aboard Silas’s gang. The film flashes back and forth between those fateful days in the gang, as Erin and Chris’s bond begins to shade into something more than professional, and modern day, as a haggard and worn down Erin propels herself through the city, convinced that the dead body found in a basin is evidence that Silas has resurfaced after all these years. 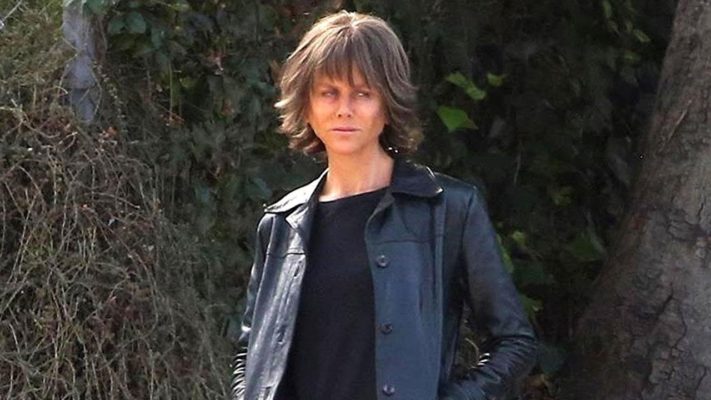 Kidman and Kusama don’t turn Erin into the kind of human bulldozer that you usually see in these movies. They make her something a little different. Erin is fueled by a bone-deep weariness, as you can tell the intervening years have taken a toll on her physically and emotionally. She has the requisite broken family, with a fed-up ex-husband (Scoot McNairy) and the kind of rebellious teenage daughter who hurls spiteful epithets at her absentee mom’s attempts to prevent her from seeing a lunkish older man. Erin can barely keep herself together, let alone a family, blowing off her partner as she revisits her old criminal underground comrades in an effort to find her spiritual undoing. In most movies of this stripe, the protagonists are driven by vengeance, but in DESTROYER, Kidman is driven by something different. She just wants to bring Silas down so this can all end.

With DESTROYER, Kusama has made a film all about at the the ways trauma, guilt and regret can weigh on a soul. Erin Bell is a shell of her former self, haunted by the decisions she’s made and the toxic ways they have impacted her life. She’s gone beyond bitter and cynical. She’s now a zombie, brittle and broken. There is no hope for Erin–she’s gone. The only thing that keeps her going is the desire to bring Silas to her version of karmic justice. The movie reflects that. It’s an unrelenting, dark tale, propelled forward on the same fumes of grim determination that drive Erin.

The problem is that the movie is so familiar and so riveted to Erin’s wavelength that it keeps you at an emotional distance. The movie draws you in, and it keeps you watching, but at the end it leaves you with a bit of a shrug. Kusama’s direction is unimpeachable on a technical level. But there’s never really any tension. There are gunfights and car chases and scenes of characters forced to perform Russian roulette, but the film is missing a certain tautness. DESTROYER is a good film, but it’s not a great one. But it does at least have one great thing about it: Kidman’s transcendent performance.