Home  ⁄  The Wire  ⁄  WHAT WE LEFT BEHIND: A LONG OVERDUE DOCUMENTARY RETROSPECTIVE ON ‘DEEP SPACE NINE’

Co-director Ira Steven Behr was a head writer and executive producer on Star Trek: Deep Space Nine, the subject of his new documentary, WHAT WE LEFT BEHIND: LOOKING BACK AT DEEP SPACE NINE. It’s important to keep this in mind while viewing the film. While it’s not all smiles and pats on the back, it’s still coming from someone who’s heavily invested in the show’s legacy and reputation. Still, with its two-hour runtime (and an hour of deleted scenes), you’re going to learn a lot, especially if you don’t didn’t know a lot about the show going into it. 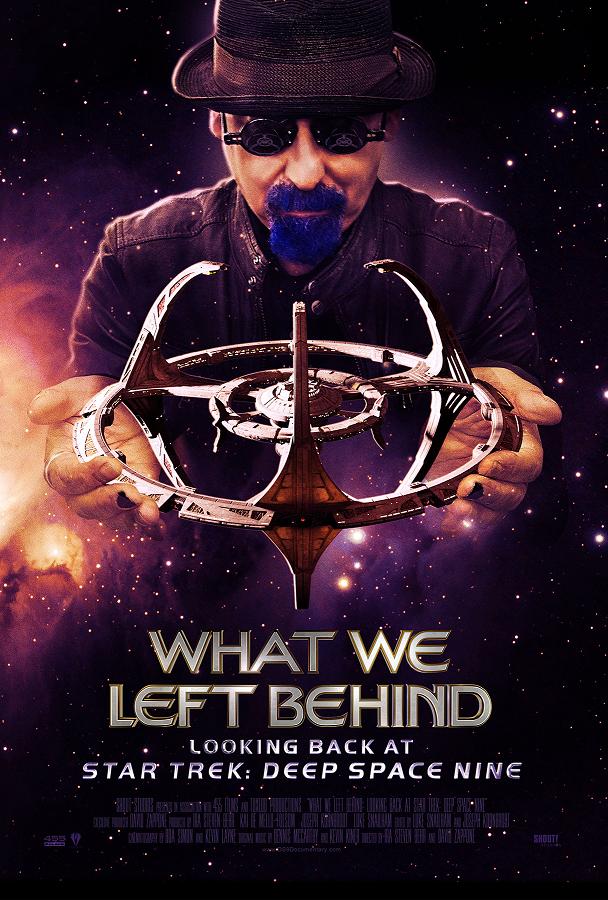 The doc is a bit quirky and it’s slightly unconventional, though it is mostly a “talking heads” film. The film opens with a cute scene where Max Grodénchik, who played the Ferengi Rom, sings a song in character (sans makeup) about how he misses his life on Deep Space Nine. It’s a nice little opening scene. Also, a handful of the show’s writers reunite to plot out the first episode of an imaginary season eight. But the film is mostly people sitting around reminiscing. There’s not a whole lot of backstage behind the scenes B-roll or anything like that.

Actually, the writer’s room stuff interested me the most. It’s pretty neat to see what it looks like for a group of TV writers to brainstorm a plot. And the story they come up with is illustrated by a series of full-color storyboards with limited animation. You really get lost in the writers’ enthusiasm for the project and watching it all (sort of) come to life through the drawings. I got into it so much that I actually forgot for a moment or two that this wasn’t actually going to be a real show. Which is too bad. They came up with some clever ideas. Someone get in touch with CBS and tell them to make this a reality!

Enough time has passed since Deep Space Nine went off the air that it’s pretty easy to look back on the thing with nostalgia, forgetting just how divisive the show was when it first came out, and to a lesser extent, for the show’s entire run. I was twelve years old when the first episode aired in early 1993, and I remember being quite puzzled by the concept. Star Trek on a space station? How do they, uh, trek? Last time I checked, a space station did not trek. 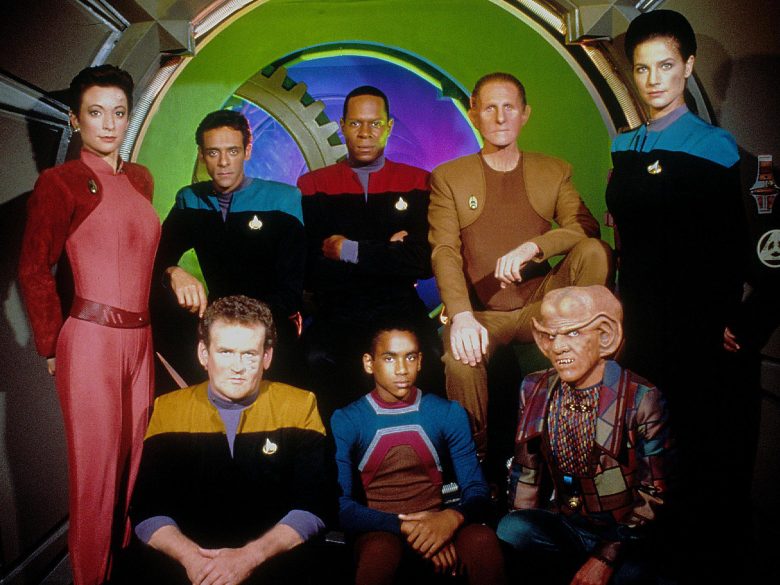 We didn’t have much money growing up, so I was stuck with whatever broadcast TV I could pick up on my little black and white portable TV in the Upstate New York wilderness where I lived. (My mom was not about to give up the much bigger living room TV for a Star Trek show.) Deep Space Nine was one of the few quality shows I had access to, so naturally I gave it a chance. It took a while, but I ended up enjoying it. Recently, I’ve been catching up on the later two seasons, since they first aired when I was into high school stuff like drinking massive amounts of booze. I never saw those episodes during their original run. I definitely like these later episodes better, with their overarching Dominion War storyline and plenty of adventures off the station in a variety of  spaceships.

Well, anyway, the documentary is mostly a feel-good nostalgia thing made in a semi-official capacity, and here I am reviewing it with a slight residual nostalgia from my childhood. Which is to say, I don’t know if you’re going to get a whole lot out of this film if you’re not already a fan of the show. A lot of it is the gushing, sentimental stuff you’d expect from a doc made by a writer and producer on the show. There are a few times, however, when some cracks in the facade start to show. 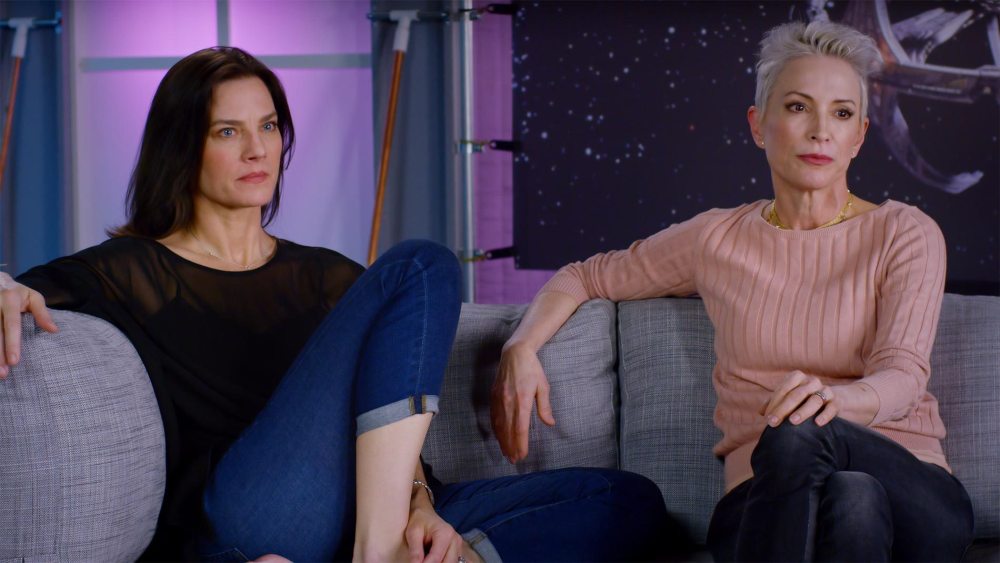 Nana Visitor tries to be kind of diplomatic, but you can tell there was some tension between her and Marc Alaimo, the actor who played the villainous Cardassian Gul Dukat. When discussing a potential romance plot between her freedom-fighter Bajoran character, Major Kira, and Dukat, a violent oppressor of the Bajoran people, you can almost see her shaking with anger that Behr even suggested putting something like that in a script. It’s mostly because it would have been completely nuts in terms of character development, but you also get the sense that some of it had to do with Alaimo himself. This becomes especially clear when she accidentally uses Alaimo’s name instead of Dukat’s when voicing her disgust about the potential romance plot. It’s all in good fun, but yeah, I’m pretty sure he wasn’t her favorite co-worker.

Another source of tension was the show’s lead, Avery Brooks. Not his acting, which everyone in the movie agrees was excellent, something to aspire to. But as a director of several episodes on the series, it seems he wasn’t exactly a people person. At least not at first. Curiously, Brooks himself only appears in the documentary via archival footage.

But, gee, you really have to figure that the guy had to have been under an enormous amount of pressure in 1993, when the show began. Not only was he the first black male lead in the Star Trek franchise, but he had to have also been one of the first in all of American science fiction television. From what I could tell from the film, studio executives were plenty happy with the publicity associated with such an historic moment, but they were always wary of going “too far,” and offending white audiences. Brooks’ badass bald head with goatee look as Robert Urich’s sidekick, Hawk, in Spencer for Hire was gone, replaced by the middle-aged dad look that we got for the first three seasons of the show. Brooks and Behr both wanted the bald head with goatee look from the beginning. But the studio was wary of making him look too “aggressive,” whatever the hell that means anyway. An executive even admits that they thought the look was “too street.” Jesus.

But Brooks gets the definitive word on the subject when he says, “[Sisko] was human. Completely human. And brown.” So, yeah, despite studio fuckery, the character was still very trailblazing. And by the fourth season, Brooks was able to get rid of the dad look. Thank god. 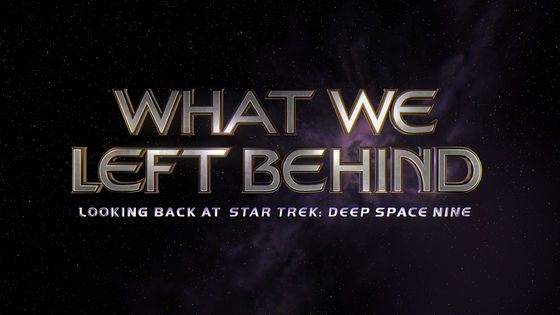 The special features on this Shout! Factory Blu-Ray release include nearly an hour of deleted scenes, as well as a roundtable discussion with the filmmakers centering mostly on the HD upgrades that were made to clips from the show for use in the doc. That’s a lot of stuff, and the deleted scenes could easily have been integrated into the film, since they all add something to the conversation, but, of course, nobody’s going to see a doc in theaters that’s more than two hours long. Getting access to this kind of material is one of the reasons I still massively love home video.

If you love Deep Space Nine and have a high tolerance for docs that mostly feature people sitting around talking, you’re going to get a lot out of WHAT WE LEFT BEHIND. But it’s definitely going to be a harder sell for people who are new to the franchise. 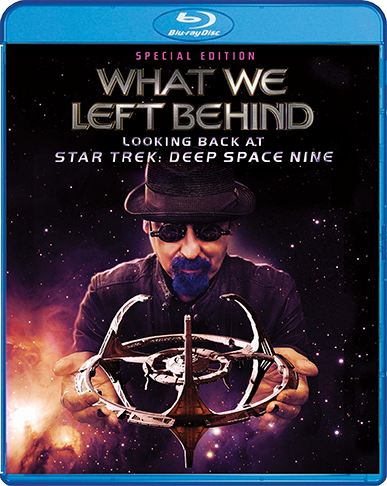 WHAT WE LEFT BEHIND is out in stores and available to order today.