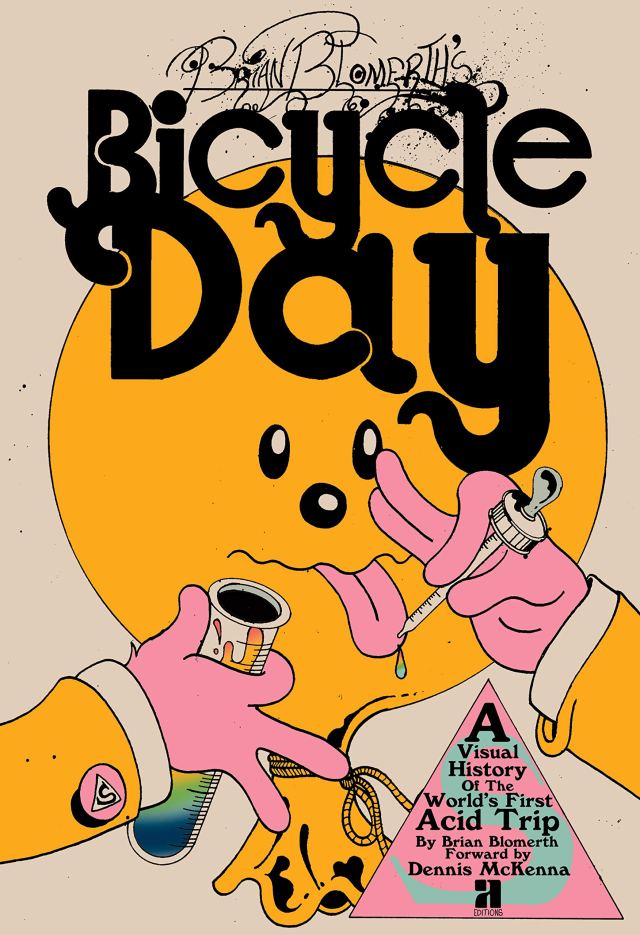 With his debut graphic novel, Bicycle Day, Brooklyn-based cartoonist and commercial illustrator Brian Blomerth has set for himself a fairly daunting challenge: Not just to illustrate, but to visually communicate, a historical “first.” And not just any historical “first” at that, but one that involved entering another state of consciousness altogether — I refer to the world’s very first acid trip, deliberately undertaken by Swiss chemist/armchair mystic Albert Hofmann on April 19th, 1943, ostensibly as part of his daily research duties for the Sandoz pharmaceutical corporation.

The first thing he did after “turning on”? Apologies to Freddie Mercury, but — get on his bike and ride!

Of course, any number of rock album/poster artists (of which Blomerth can number himself) have produced deliberately “trippy” images over the years, but by and large the “target market” for this type of artwork, and the recordings and/or concerts it advertises, is composed of people who have already “turned on” at least a time or two. In this day and age, however, with LSD use having plummeted to a depressing degree as young people have swapped out consciousness-expanding drugs in favor of consciousness-negating drugs such as crystal meth, it’s fair to say that a good chunk of Blomerth’s prospective readership has never tripped — and that’s all well and good, I suppose, because our protagonist in this handsome Anthology Editions-published book never has when we meet him, either. 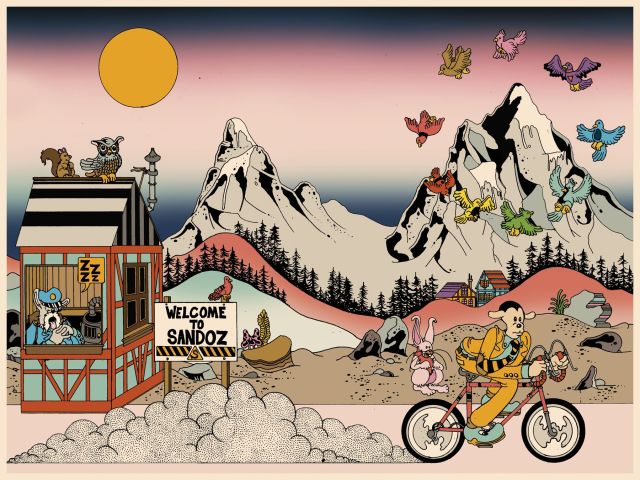 Cue, in the early going, what one would expect in terms of kaleidoscopic line art and rich, fluid color, albeit to a far greater degree — telling his story entirely by means of double-page spreads, Blomerth quite simply never lets up, establishing a tone of unreality early on (Hoffman, and all other “human” characters in the book, being portrayed as anthropomorphic dogs) and then going from there through various ebbs, valleys, highways, and byways of the psychedelic experience in a (sorry to invoke the obvious term, but) mind-bending succession of arresting, utterly inexplicable imagery that evokes not just the look and feel but, most essentially, the character of the LSD experience for a first-time user. Hell, for the first-time user.

Shapes that aren’t shapes move and/or stay perfectly still, sometimes simultaneously, in front of, behind, or even within backgrounds that might be foregrounds that might be real that might be unreal that — honestly, a few pages in (after some cursory introductory “dialogue” composed primarily of yodeling), you stop attempting to define, demarcate, discern, or even describe what you’re seeing, and simply go with the gently inexorable flow, which is about as authentic an approximation of the LSD experience as you’re likely to find committed to paper. Unless we’re taking about blotter paper. 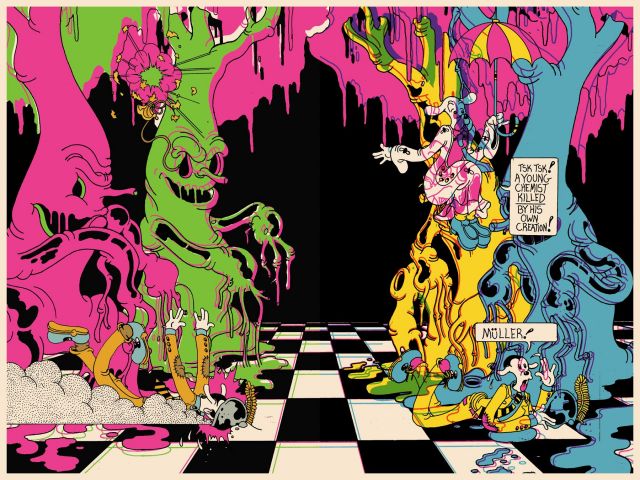 There’s most definitely a progression in the first “act” (I term I use very loosely) here, and a “wind-down” near the end, but by and large it’s not like Blomerth necessarily commits to “one-upping” himself with each successive spread. Things tone down then ramp back up without warning and without regard to expectation, the ideas of “pacing” and “narrative thrust” left as far behind in the day-glo dust as consensus reality itself, again intuitively mimicking the very nature of every acid trip (at least every one I’ve  ever taken, never having experienced the mythical “bad trip” myself — which, like the “acid flashback,” I’ve always, and probably accurately, dismissed as just so much “just say no” propaganda), while utilizing his iteration of Hoffman’s unique POV to present it all through fresh eyes.

Veterans of the psychedelic experience may be tempted, at the point, to think that there must be something of an “LSD For Beginners” vibe to Blomerth’s comic, and that’s not entirely inaccurate, but I’d implore such readers to keep an open mind (shouldn’t be too tough if you’re an experienced “acid head”) and think back to their very first trip. Wouldn’t it be amazing to feel something like that all over again? That’s the effect Blomerth is going for — and, to his great credit, he manages to pull it off more often than not. 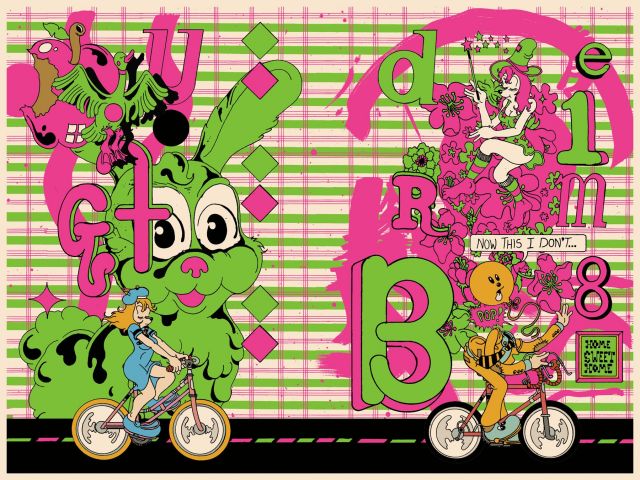 As a matter of fact, whether such was Blomerth’s intention or not (and bonus points to him if it was), this book functions as a very successful piece of “pro-drug” — specifically pro-psychedelic — propaganda, portraying tripping as not only something inherently beneficial and expansive, but something that’s been so from the very start. As such, then, it not only serves as a kind of visual travelogue through altered and heightened states of consciousness, but as a necessary, even long-overdue, counterpoint to the anti-drug hysteria that the American public has been inundated with for decades, resulting in one generation after another of uptight, boring, conservative squares.

Forward by ethnopharmacologist Dennis McKenna aside (not that it’s poorly written, mind you, anything but), the book even has something of a youthful, future-focused quality to it, Blomerth’s deliberately Disney-esque characters and utilization of modern digital coloring techniques being elements that should very much appeal to younger readers out there.

A children’s book about LSD? Hey, stranger things have happened — but you certainly don’t need to be a kid to glean a tremendous amount from Bicycle Day. Whether you’ve tripped hundreds of times, only tried acid a time or two, or have never touched the stuff, Blomerth creates a universal first-time experience anyone can relate to, and some may even feel compelled to replicate for themselves. If any readers out there have a decent LSD connection, please don’t hesitate to hit me up — I’m middle-aged and every “dealer” I ever knew has moved on to the same straight-laced world of 9-to-5 that I find myself in. Until I can get ahold of another hit of purple microdot (or whatever is out there these days) myself, though, Blomerth’s explosion of visual invention is a more than acceptable substitute for, and evocation of, the very best that the psychedelic experience has to offer.