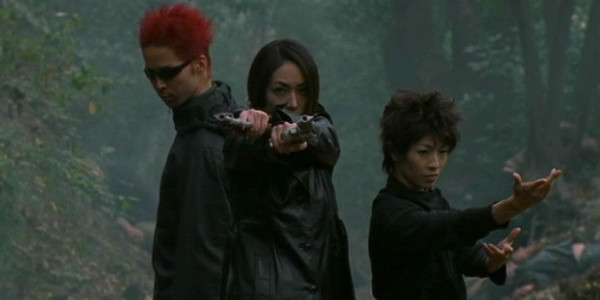 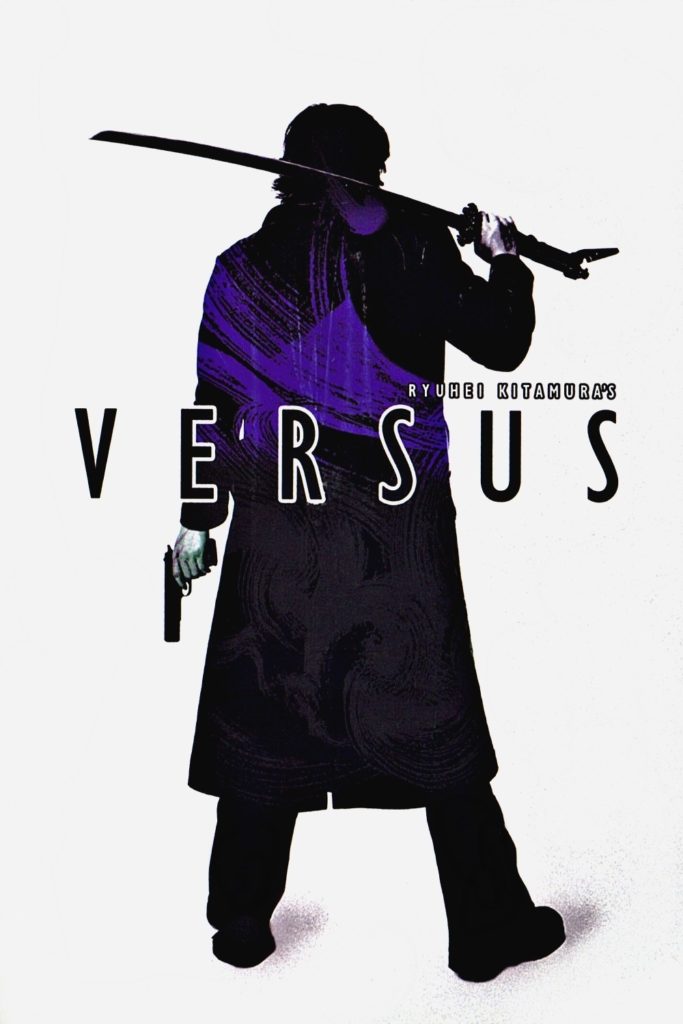 “I Can’t Remember Anything That Happened Before I Got Here.”

If a movie that ends with two zombies having one of the best swordfights you’ve ever seen sounds terrible, stop reading now.

In the early-2000’s, J-Horror was starting to creep over to America in a big, bad way. Sadako was making people reconsider popping in that cassette a friend let them borrow, lest they a week later. Grudges grew to be feared and respected. Ditto any Japanese woman with long hair. Schoolgirls in a subway made you wonder if they were part of a suicide club, and you were on your guard when you heard the train coming. Battle royales became less about wrestling and more about kids killing kids on a deserted island. The cinema sailing from Japan was a very welcome change from the PG-13 era of American horror we were anchored to, with casts swapped from whatever shows were popular on The WB. One J-Horror movie, in particular, came barreling to our shores on a war ship running on blood and a love of ’80s action movies. 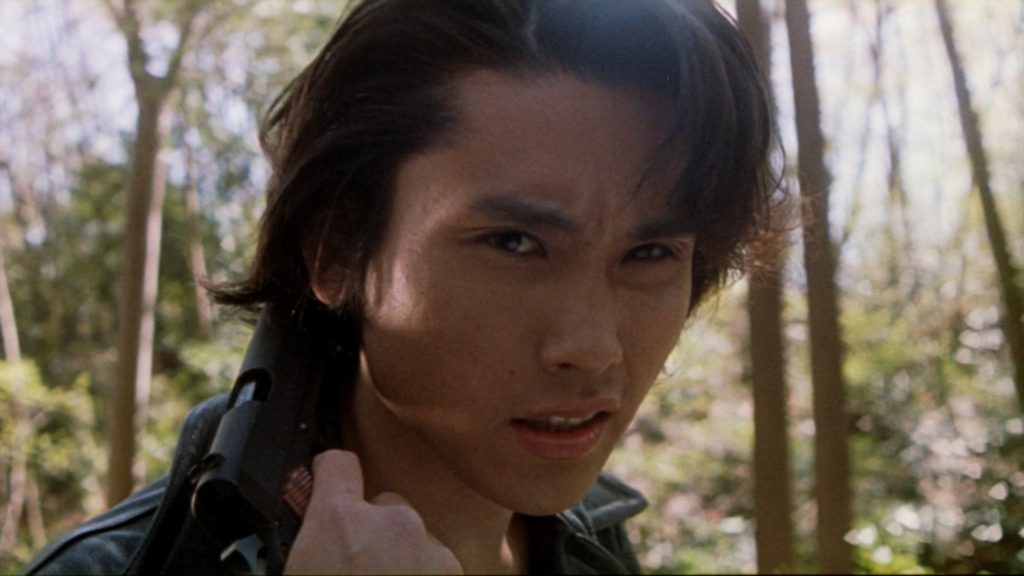 If someone dared John Woo to make a low-budget zombie movie about yakuza in a forest while he was watching HIGHLANDER, he would’ve created something like VERSUS. With more doves. George Romero, and everyone who’s ripped him off, made zombie movies with a message, or just kept remaking NIGHT OF THE LIVING DEAD. Ryuhei Kitamura had more primal motivations, with no ties to Romero outside of the z-word. The first time zombies are seen, they’re wearing samurai clothes and wielding katanas. It’s hard to get further from Romero’s zombies than that… yet VERSUS spends the rest of the movie excitedly avoiding that boundary line.

The plot could be summed up like “gangsters fight zombies, and the zombies fight back.” But as Sam Raimi proved in 1983 with EVIL DEAD, a simple plot doesn’t get in the way of theatrics. Like EVIL DEAD, VERSUS exists as a way for the director to blow your mind with everything they’ve learned up until that point. That’s not to say that there’s no heart. It’s also a love story that extends centuries, with a flashback in the midst of the gleeful ultraviolence and bravura camerawork that’s rather touching. There’re also zombies getting their brains punched out, people trying to out-Matrix bullets, and many other examples of beautiful, bloody absurdity. 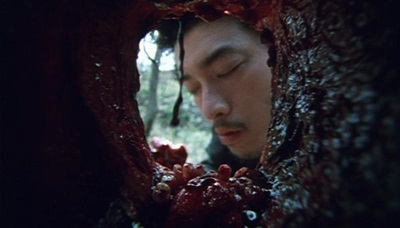 VERSUS doesn’t quite play out like one long fight scene, that honor goes to Takashi Miike’s IZO, but it’s close. And like IZO, there’s enough variety with each fight that it doesn’t get boring. There’s also an escalation with the types of zombies. It starts with shambling ones that can use a gun, barely. They’re there mostly to get decimated. Next comes what Kitamura refers to as “hyper zombies”. They’re there to embarrass the hero. It ends with the aforementioned badass zombie swordfight. Seriously, it’s awesome. And just before the final slash is made, there’s a long, silent pause with the fighters standing back to back and the camera circling around them. Kitamura felt that the next move was the decisive one and wanted the moment to have weight. Then it ends with a cool twist… or does it?

VERSUS began life as a sequel to Kitamura’s micro-budget zombie movie, DOWN TO HELL. Made in 1997, DOWN TO HELL was wrangled by Kitamura and five other people over the course of ten days with a budget of 300,000 yen (around $3,000). Raimi went a similar path with EVIL DEAD, making WITHIN THE WOODS first to pave the way. Kitamura announced plans to make the sequel, THE RETURN: DOWN 2 HELL, in 1999 with a budget of around 1,000,000 yen ($10,000), and even made a promotional video with some of the cast. But the concept kept growing until it became a beast that had to exist by itself. He wanted it to be about the biggest fight in the world. He wanted the characters to love fighting and to not have any fears. The title changed from DOWN 2 HELL because a friend of Kitamura said that his life was fighting, the movie was him, so he should call it VERSUS. So he did.

One of the things fueling Kitamura while planning was a frustration with Japanese cinema. He loved their swordfighting movies, known there as “chanbara” (the sound of swords clashing), but they hadn’t been made in quite some time. So, like any decent artist, he decided that he was gonna make one since no one else was. He had to borrow money from friends and family since no Japanese producer wanted anything to do with his movie. He was more interested in an international audience than a Japanese one because he felt Japan discarded the kind of film VERSUS would be. Because of that, when it came time to premiere VERSUS, it was at German film festival instead of Japan as a final “fuck you”. This next fact is a lesson to everyone wondering if their YouTube video might lead to something else: one of the most important people in the making of VERSUS was found because of a 100-yen gag movie. Kitamura saw it and wanted to work with its director, Yudai Yamaguchi. It also had who would be his star, Tak Sakaguchi. Sakaguchi was a street fighter and Kitamura told him that he’s better than that, made him lose a few pounds, then put him in VERSUS. 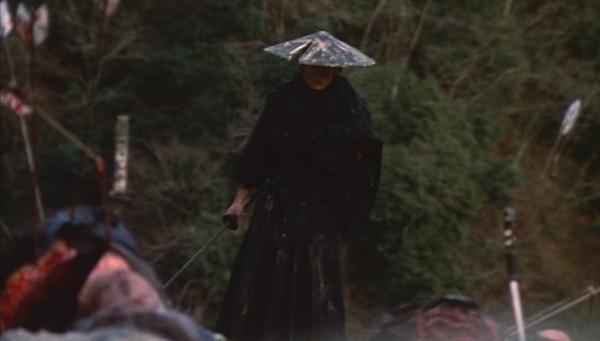 The original concept was more FROM DUSK TILL DAWN, with people fighting gangsters, then suddenly: zombies. Yamaguchi convinced Kitamura to ditch that and to have the movie drown in zombies. Kitamura didn’t want VERSUS to look like a horror movie because they tended to look cheap, which is why he chose the cinematographer, Takumi Furuya. Yamaguchi was much more of the horror geek between the two, which becomes quite clear when you look at his future movies like MEATBALL MACHINE. The inspiration to have the two samurai scenes, however, came from Sakaguchi and took the biggest chunk of the budget. Kitamura was trying to find a way to make the zombies stand out from the start, and Sakaguchi was reading a manga about a boy with a wooden sword. Sakaguchi asked, “Samurai vs. zombies?”, and it stuck. Kitamura started VERSUS with a samurai fight because he felt it’s how a Japanese film should start. He didn’t care when or where VERSUS was set, so none of the characters have names. He felt they brought too much reality. The only semblance of a name is Sakaguchi’s character’s prison number, KSC2-303. Kitamura also didn’t want gory, messed-up zombies. He wanted them more as silhouettes and wearing black. He also wanted them to use guns, which is where Yuji Shimomura came in. Did you like the wild action cutscenes of DEVIL MAY CRY 3 & 4 or BAYONETTA? He’s your Huckleberry. Shimomura created a high-octane, brutal ballet with the fights and has worked on many of Kitamura’s future movies as well as video games.

Shooting started on October 4th, 1999, after three months of preparation, at a ski resort that was shut down for Autumn. The cast and crew stayed in Sports Garden 330, whose digits were miswritten as the prison number. Kitamura felt that living in the same area as everyone worked well for getting and giving ideas. The gym was turned into the special effects workshop, where the sole decapitated head they had was constantly cleaned and patched-up. Meetings and rehearsals were held nightly in the dining room, usually involving raising funds so they could shoot the next day. Filming was supposed to take three weeks but because of the weather, money, and other problems, it took two months over the course of seven months. Like with Raimi and EVIL DEAD, it was the shoot that wouldn’t end. One issue was that training didn’t prepare the actors for the uneven, slippery forest floor. Another problem was, like Ned Stark warned, Winter was coming. The solution was to move from the resort four hours away from Tokyo to a location ten hours away (where DOWN TO HELL was shot). When they restarted filming again, during Spring, it was at a place 30 minutes away from Tokyo that no one knew about.

A lot of zombies were crew members and friends. One zombie was also a very handy dentist. Sakaguchi tried racking a gun in his mouth during rehearsal and broke a tooth. Sakaguchi also kept getting nicked during a knife fight because they were real and not dulled. During rehearsal, it was obvious that the fake knives were just wood wrapped in foil. He also broke a rib. Plus, during the final fight, he was blind in one eye and had a narrow field of vision in the other. Despite all that, he managed to take donations for UNICEF during filming. Good Guy Tak. Shooting eventually ended, though Kitamura returned with some of the gang in November of 2003 to shoot more fight scenes. No, not like George Lucas. Sakaguchi replaced Shimomura as fight choreographer, and his scenes were angrier and more like brawls. That version is called ULTIMATE VERSUS and even though it’s longer, it feels quicker. 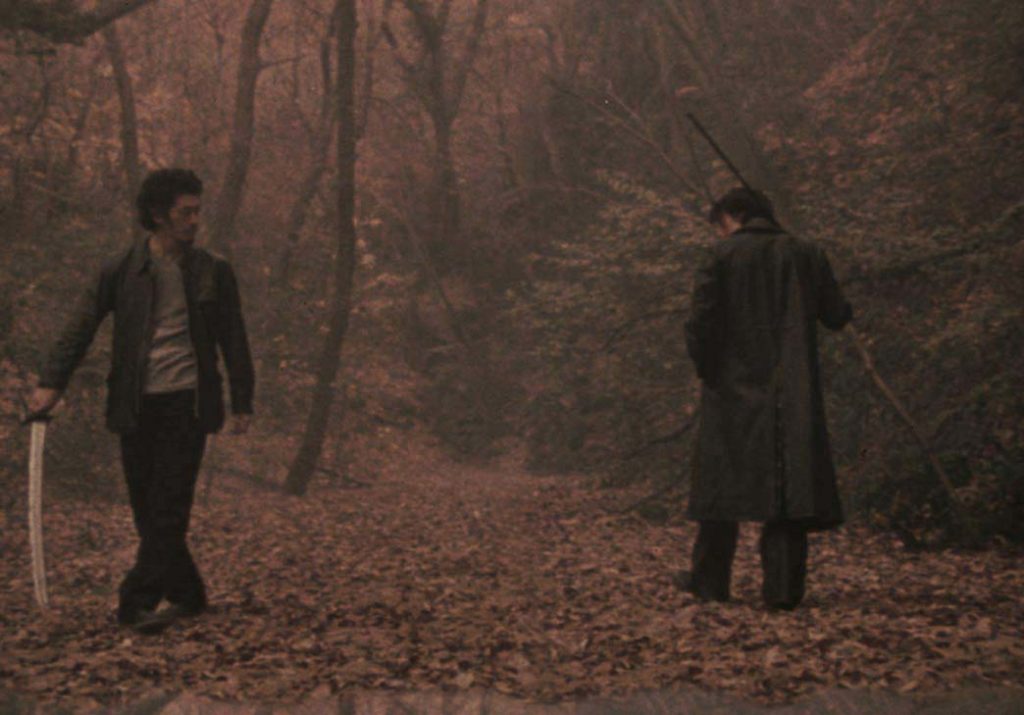 “There’s Nothing Left to Destroy in This World.”

When VERSUS premiered in Germany on October 29th, 2000, Kitamura got the reaction he was hoping for. Everyone outside of Japan loved it, and Japan wanted more movies from him. Tokyo Shock released both versions in the US with editions that rival Scream Factory. His next was 2002’s ALIVE, about a guy taken from Death Row to be part of a government experiment. In 2003, he got his chanbara wish by making two movies of that genre. AZUMI was about a girl-assassin sent to kill warlords, and ARAGAMI was the movie he made in a week while preparing AZUMI. Kitamura was challenged to a duel by another director, Yukihiko Tsutsumi, to make a movie with two characters in one setting (Tsutsumi’s entry was 2LDK). Luc Besson made LÉON while preparing FIFTH ELEMENT and that worked out well for him, so it’s not as irresponsible as it sounds. From there, Kitamura kept working, getting to make movies like Japan’s last Godzilla before this year’s SHIN GODZILLA, eventually crossing the pond and making two American horror movies, MIDNIGHT MEAT TRAIN and NO ONE LIVES, before going back home for LUPIN THE THIRD.

Tak Sakaguchi became a fixture of B-Movies in Japan, appearing in Kitamura’s next three movies, then working with Yamaguchi on BATTLEFIELD BASEBALL. He next branched out into other genre affair like DEATH TRANCE and TOKYO GORE POLICE. He dabbled in serious movies, like UNITED RED ARMY, and moved into directing as well as fight choreographing, with YAKUZA WEAPON and others. After being in Sion Sono’s excellent movie about making movies, WHY DON’T YOU PLAY IN HELL?, in 2013, he disappeared from in front of the camera for reasons that aren’t clear. He’s making his triumphant return this year with RE:BORN because his fans want him back, but it seems that he’s retiring for good. A shame, but he’s left us with an amazing filmography and took the time to say “farewell.”